New York artist Laurie Simmons made her first feature film this year, called “My Art”. She’s also the mother of Lena Dunham, creator of the show “Girls.” But it’s Simmons photography that takes center stage at a major retrospective of her work on view at Modern Art Museum of Fort Worth. In this week’s State of the Arts, she sat down with me to talk about the subject that has enthralled her for decades.

You can click above to listen to the interview that aired on KERA FM. Or read a longer excerpt of our chat below:

Well, I think I’ve always seen the doll as a stand-in for a woman, or a human.

And let me just say definitively, and right away, that I really wasn’t a kid who played with dolls. I really was peripatetic and kind of had ADD/ADHD, so I was much more likely to rip the heads off and cut the hair off.

But for me, wanting to create these scenes in front of the camera, and having moved to New York in my twenties, and being a little bit afraid to go out on the street, it occurred to me that I could set up these scenes in my studio and get a lot of information across, creating these little tableaux.

When you were getting your start back in the ’70s, that was during early waves of feminism. So, was choosing dolls kind of a risky thing to do? Did you get push-back on that?

Well I was fearful because the art world seemed like such a male playground. And I felt like, number one, playing with toys as a grown up is kind of taboo anyway. And I thought I’d be laughed out of town using dolls. And I felt like a woman’s position in the art world was so sort of tenuous any way.

When I shot these tableaux of domestic spaces in the ’70s, it wasn’t necessarily a critique of women. Though people wanted to write about it in that way. It was more about examining my own memories of childhood and growing up.  It was like where memory and tableaux and domesticity all collided.

So I had a pretty good rational for it. But nonetheless, I felt a little embarrassed about my choice of subject. 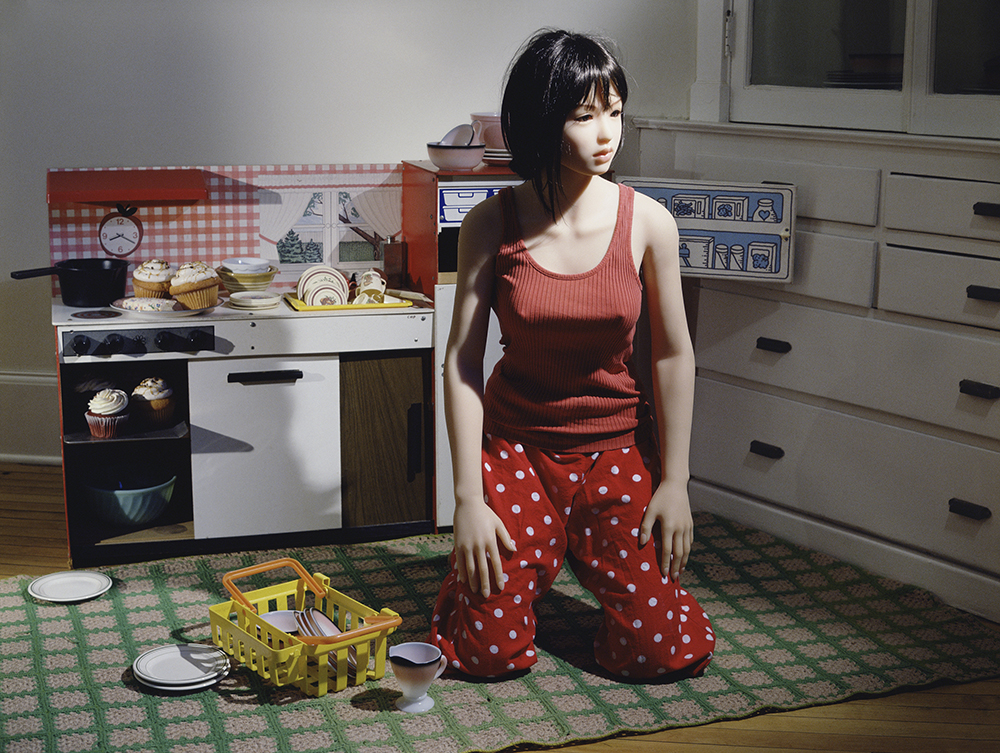 Did you ever feel like you were the doll in the photo?

Yes, I did feel like the character. I still do feel like the characters in my photos. Every series gave me an opportunity to act out some aspect of my inner life. I don’t think it’s a coincidence that when I first had children, I was working with ventriloquist dummies that were pretty much the size of the kids I had at home.

So there’s a really strong connection between my real life and what’s going on in my photos.

You were part of a wave of photographers in the ’70s sometimes called the Picture Generation. And you were all taking the medium in new directions. What do you find most exciting about the art of photography today?

I don’t think that I would make the decision to be a photographer today. If you think about where the world was in the 1970s, photography was only about 130 years old. It felt like a new medium. It felt very radical and subversive for a woman to pick up a camera and use it irreverently. It felt great not to be part of the art history of painting and sculpture, which seemed dominated by men.

Fast forward to 2018. Here we are with Instagram, Twitter, Facebook iPhones. There are millions and trillions of images coming at us every day.  What does it mean to be a photographer? Everyone’s a photographer. And what really amazes me is how great everybody is at it.

I still teach. I teach photography on the graduate level. And I always have so much sympathy for my students. What do you do? How do you do it now? Those are the questions.

Let’s talk about your children. You have two children, Grace and Lena. What influence have they had on your career, and how have you influenced theirs?

Well, I think that having a mother who loves her work and fights for her work probably sets a great example for children, particularly for female children. I think it never occurred to our children that people would have work that they didn’t love. And that’s really a gift in life…I think that that made them feel like they wanted to have work in their life that they could love.

I’m proud of my resilience. I’m proud that I kept working when things were not great. An artist’s career is a series of peaks and valleys. I worked during the peaks and I worked through the valleys. So our children had a chacne to see that.

What I learned from them, it’s unlimited. I don’t know where to start. Their resilience. Their activism. Their acceptance of all kinds of people. People that are like them. People that are different. Their openness. They’re 21st century children. And I was born smack-dab in the middle of the 20th century. And I bring all that baggage with me. I feel like it’s been an honor and a gift to get to know them.

You helped Lena make her first film, “Tiny Furniture”. And she helped you with your feature film, this year. Tell me how you two work together.

Well, I made a film, a 45-minute puppet musical, in 2006. Lena was in college and she was super-involved and inspired by that. I think that helped her solidify her ideas about what she wanted to do.

She started by making these little videos and expanded into film. And then when she made “Tiny Furniture” she cast me in the movie, which I had a lot of doubts about that. But it gave me the opportunity to be on set every day and see that it’s possible to make a feature film for very little money. She  made a film for less than it cost to buy a decent used car. I mean it was incredible.

So my seeing her budget, her crew, the way she worked, actually allowed me to start thinking about making a feature film. Of course, I paid everyone who worked for me, because I’m a grown up. And I just can’t stand the idea of people working for free. She didn’t have to pay anyone because it was a bunch of friends working together. 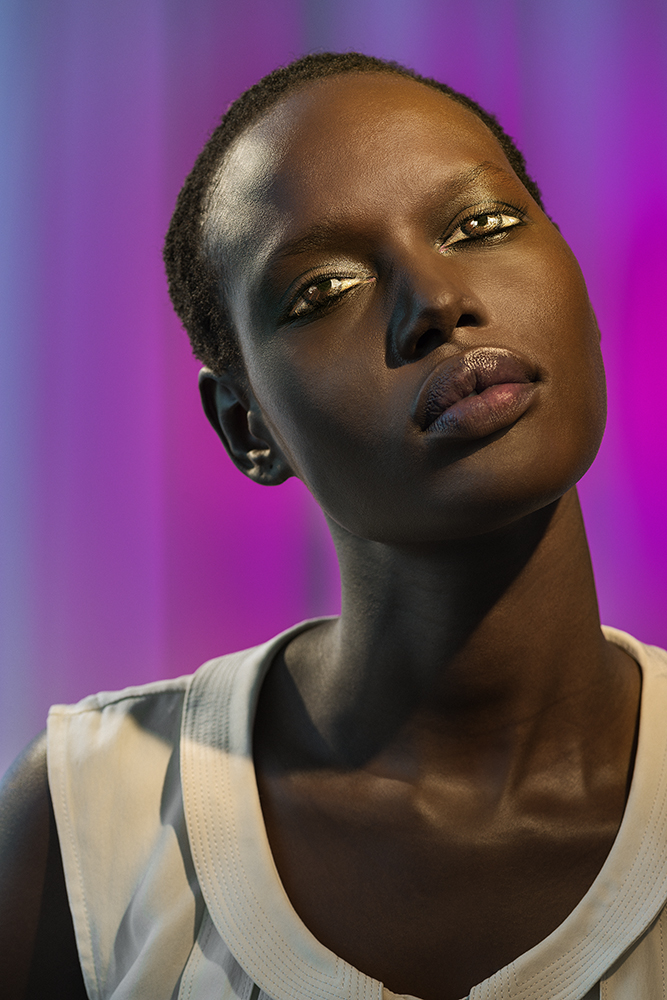 “How We See/Ajack (Violet)” by Laurie Simmons.

You’ve recently made portraits of your children. Are you moving toward photographing people instead of inanimate objects?

I really am. The biggest surprise about the show at the Modern in Fort Worth is that it opens with a group of portraits that I made in 1974.

I never intended for anyone to see those pictures. Andrea Karnes, my incredible curator, found them in my studio and said, “We’re showing these.”

And I really was resistant, but they’re actually up on the wall now. And my show ends with my most recent work, which are portraits of my friends, my dog. And they all have some aspect of their clothing or eyes painted on, so there’s an element of artifice.

That’s one of the great things about having a retrospective like this, I imagine. What else are you learning when you look back at your work on a scale like this?

The most interesting thing is how firmly I stand behind everything I made. There’s so much stuff I never let out of the studio. I feel like there’s a really strong intention behind everything I ever made and that I can still support it. I feel like it tells the story that I wanted to tell. So, I’m realieved that I don’t feel any disappointment. And I was curious what I would feel when I walked into the exhibition. How I would feel about everything.  And I basically feel like I have this huge family of photographs. And it’s like I still like all my children.