Small businesses that sell their homegrown food and handmade creations rely on live markets to turn a profit. Because of the coronavirus pandemic, some of these markets have moved online to help keep their vendors in business.

The Boho Market in Dallas is one of them.

If you stopped by the market any weekend before the pandemic, you would’ve seen customers and their four-legged companions, nodding their heads to music as they weaved through booths filled with pressed flower bouquets, handmade jewelry and homemade natural skin care.

But coronavirus brought cancellations and restrictions, drastically affecting the small business owners who sell their products at markets.

Vickie Mireles is one of them. 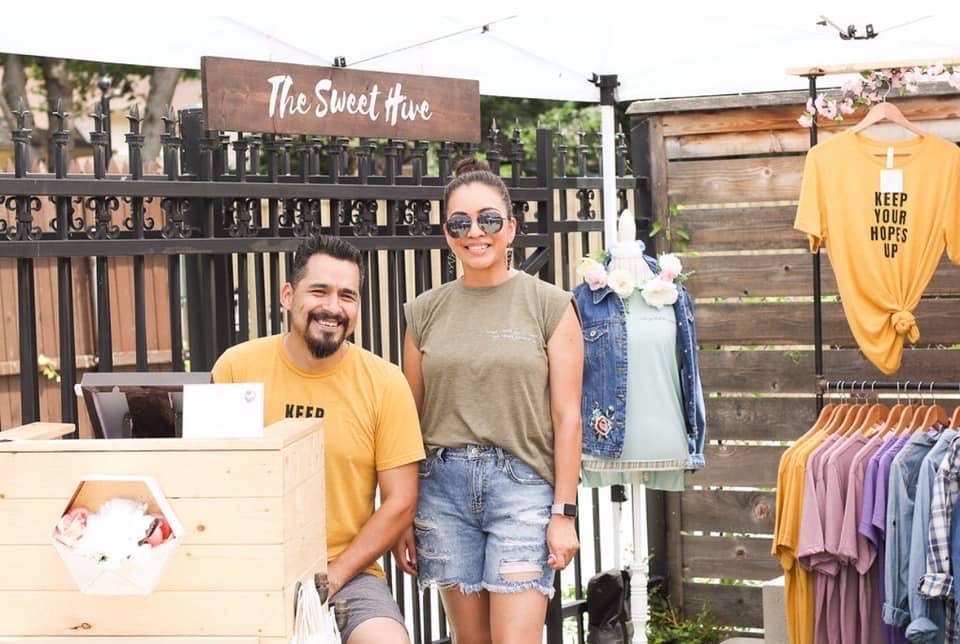 Vickie Mireles (right) and Chris Mireles at The Boho Market. Vickie founded The Sweet Hive, a line of vintage apparel and accessories, and has been breaking sales from the market’s online platform. Photo:  Vickie Mireles

“I know for me when everything kind of happened, and y’know my markets started getting cancelled, panic set in. Because for me, for my business, we generate about 60 to 70% of our income from markets,” Mireles said.

Mireles founded The Sweet Hive – a line of vintage apparel and accessories, screen-printed by hand right here in Dallas. She says it’s called The Sweet Hive because bees inspire her philosophy — to give more than she takes. Even now, she donates 10-percent of her proceeds to charity.

The Boho Market is one of the largest of its kind in Texas. James Trammell runs the market with founder, Taylor Milbauer — who’s also his wife.

He said building the website was crucial for vendors.

The Boho Market’s online platform has been in the works for years, but being forced to cancel live events indefinitely pushed the couple to finish it.

“The Boho Market, I mean, already had a large audience and a large reach. And so, for us that don’t have quite that large of an audience, it’s such a blessing,” Mireles said. 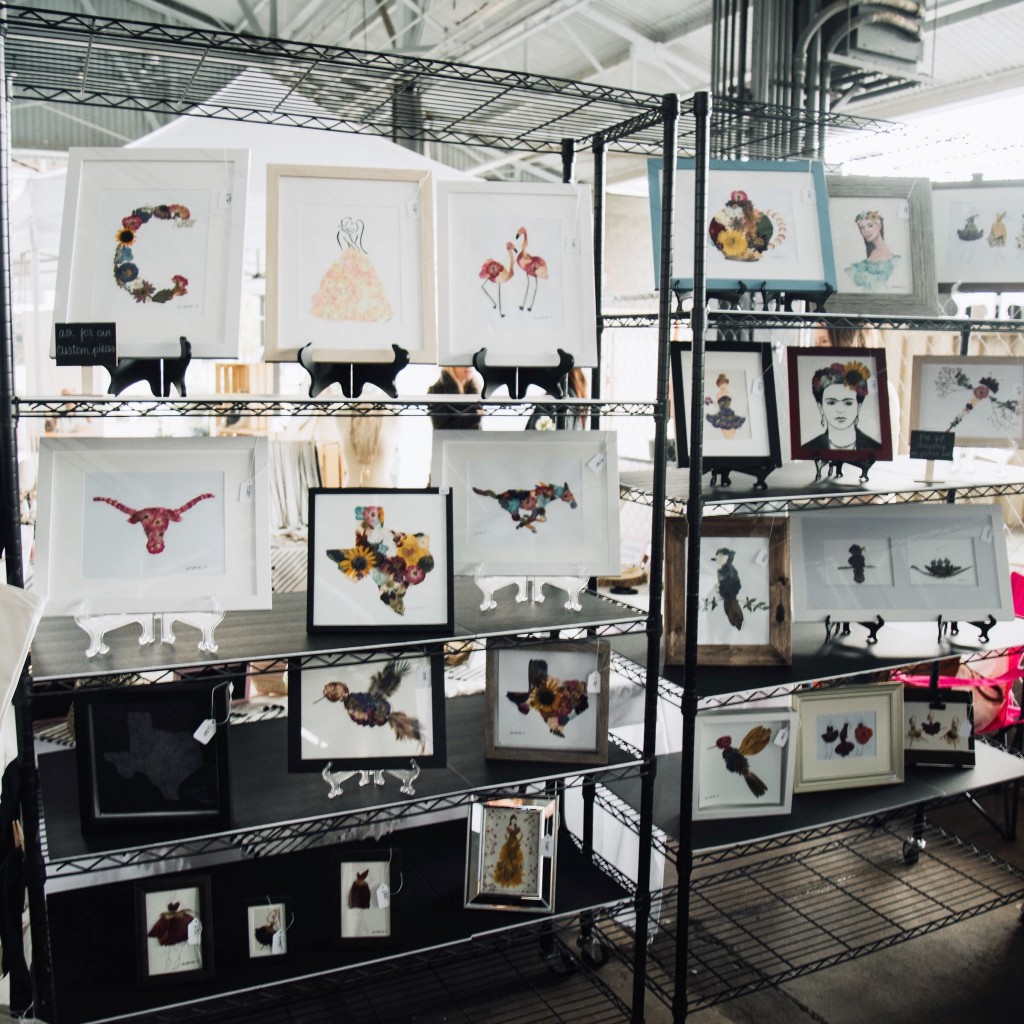 Andrea Castaneda, founder of Designs by Andrea, lost about half of her income amid the Coronavirus pandemic. Castaneda presses flowers and bouquets into art, where she gathers most of her work from weddings. (Photo Courtesy Andrea Castaneda)

Andrea Castaneda is another regular vendor with The Boho Market. She said Milbauer was the first person to tell her she could turn her art into a business. Before that, she was just making her creations for friends and family.

“Their market is one of our favorite markets,” Castaneda said. “Not only because of the income we get every time we go to The Boho Market, but the community itself.”

Castaneda’s business, Designs by Andrea, presses flowers and bouquets into works of art. Most of her clients are brides wanting to press their wedding bouquets, but she also creates other designs and custom creations.

Since the majority of weddings are being cancelled or postponed over health concerns, as well as markets being shut down, Castaneda’s lost about half of her normal income. Usually she works with a team of five, but she’s had to lay off half of them to stay in business.

She said it’s been a stressful time for her, but she’s trying to stay positive and not overthink things.

“It’s one of those things I learned the hard way,” Castaneda said. “As an entrepreneur, you kind of have to jump off the plane and build a parachute on the way down.”

On the bright side, Castaneda said she’s received way more commissions than normal for the end of the year, when most couples hope to hold their rescheduled wedding ceremonies.

The Denton Community Market, a non-profit produce and art market, is also shifting to online sales.

Normally on Saturday mornings, tents dot the green pasture at Denton County Historical Park. Residents grab tamales to start their day, and vegetables and meat, all produced within 100 miles of Denton, are available — even to food stamp recipients.

Opening day for the 11th season was supposed to be April 4th. Instead, organizers created the Denton Community Virtual Market.

Vicki Oppenheim, the market’s board president, said the platform promotes vendors who offer pick-ups or already have online stores. 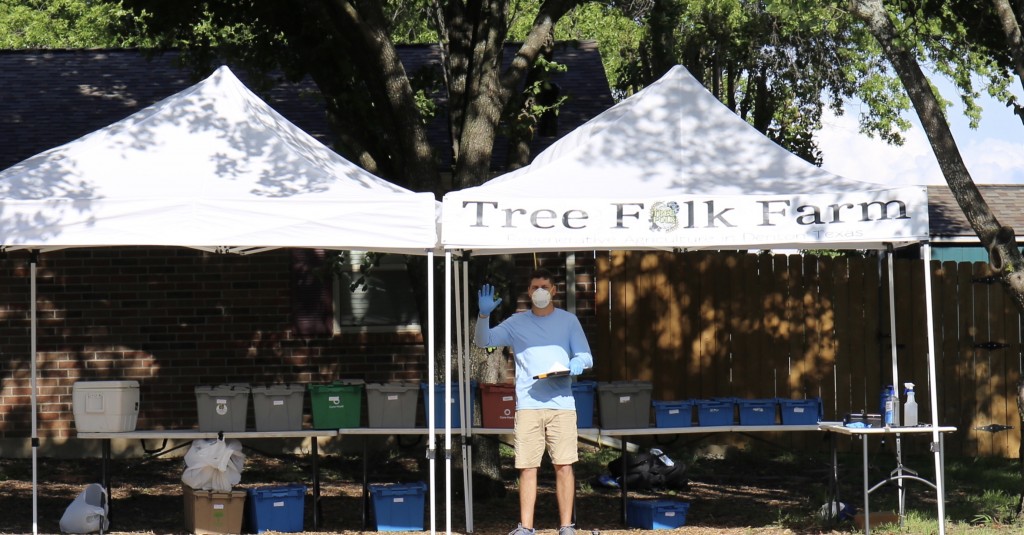 It’s working for some, like farmer Andrea Gorham. At Tree Folk Farm, she’s trying something she never has before: taking orders for weekly pick-ups.

“We had about 30 orders each time and some people will pick up for their neighbors, too. So, it ends up being about 25 cars driving through in a two-hour period,” Gorham said.

Every Wednesday, Gorham and her husband put on their masks and gloves to hand out lettuce, tomatoes, mushrooms and more.

“We’re such a small farm and local produce has always been high in demand and especially now,” Gorham said. “We really haven’t been marketing and we are selling out of everything that we have.” 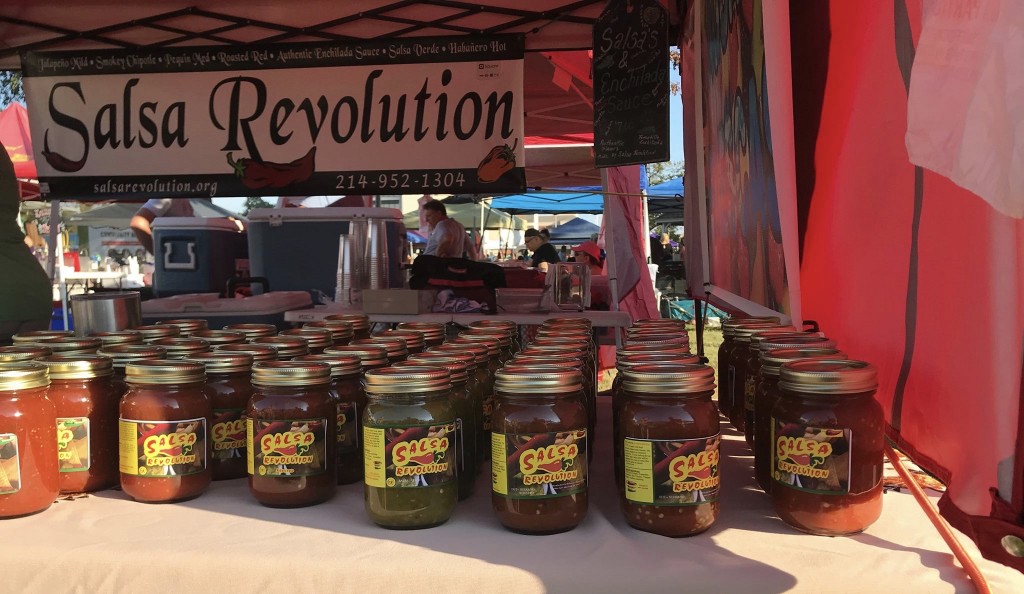 From salsa verde to chile pequin and enchilada sauce, Salsa Revolution has been one of the more popular food vendors at the Denton Community Market.

Angie and Raul Bonilla of Salsa Revolution have relied on local markets for the past 10 years to sell their homemade salsa and agua frescas.

Now, the two have lost about 60 percent of their income. If it wasn’t for their online store, their sales would have completely halted.

“We put a lot of footwork into our business and pride into our product because we make it all ourselves, in our own commercial kitchen,” Raul said.

He said the new shift has been a struggle for their small business.

“Salsa Revolution has put the groundwork in to make sure that people are aware that we do sell a good product,” Raul said. “And along with the other small businesses that make their own products, this is a challenge for them right now.”

The Denton market itself isn’t doing so well. Paid staff have been laid off and volunteers run the show. But Oppenheim is optimistic.

Taylor Milbauer of The Boho Market says this is their new normal. The online platform is here to stay, even after live markets reopen.

“We want to remain a platform for these small businesses to ultimately outgrow us,” Milbauer said. “We want to be this level for them where they can build their dreams.”

And during these uncertain times, online markets are helping to do just that.