In the middle of the Great Depression, a football team made up entirely of orphans made a deep run in the Texas High School playoffs. Their story is told in the new film “12 Mighty Orphans,” based on the bestseller by Jim Dent.
Dallas native Luke Wilson plays Rusty Russell, the team’s coach who later went on to coach at Highland Park and SMU, revolutionizing how offensive football is played along the way. During a recent conversation, we talked about how he went about playing “a saintly guy”. And we talk about the film that, 15 years after its release, people still come up to him to talk about. (This interview has been edited for time and clarity.)

You play Rusty Russell, who saw coaching these sort of forgotten boys as a calling.

That’s exactly how I saw Rusty, as I kind of learned more about him, he was just this kind, decent man who, yeah, he’d left, you know, a prestigious school in Tyler with a prestigious football program to go to Fort Worth and take over this Masonic orphanage as a teacher and a coach. As I began to learn more about him, I did think of him as kind of a saintly guy like, gosh, they just don’t make them like this anymore.

We should note that Russell was a true football innovator. He’s credited with creating what’s known as the Spread Offense, which is to say, he had a big hand in turning the game into this fairly balanced mix of running the ball and passing the ball that we see today.

Football, you know, in that era, leading up to Rusty, I think it had been more of that just kind of that three yards and a cloud of dust — that kind of Red Grange where it was almost more like rugby almost, to where Rusty took a more modern day approach.

One of my favorite parts about watching movies that are based on true stories is when you get to the credits, and they tell you all about what became of the people in the movie. And it’s really something to see how these boys all grew up to become decorated World War II veterans or professors, and other important careers. What’s your sense of what they learned from playing on this team and from spending time with Coach Russell?

I do think Rusty had to have helped these kids immeasurably. I keep thinking back to this was a tougher time where it’s not like today where people are talking about their feelings and things like, you know, not bullying people and treating people with respect. This is like the era of guys standing at the California state line blocking the road into California because they don’t want Okies showing up out in California. So it’s not as if there was this kind of kinder, gentler, sweeter time back then — I think it was a lot more rough and tumble. So I think that’s why somebody like Rusty would have kind of stood out and had such an impact on these boys, because he was so dignified and decent and treated them with respect and love.

I think you make a good point, too, that these are kids who didn’t really have an expectation that their lives were going to turn into anything special.

Fort Worth was kind of the end of the line for these orphans, where there would be these kind of orphan trains back during the Depression, where they would kind of move from the east out west and kids would get adopted along the way. So a lot of these boys were — they weren’t babies, you know, they were 8 or 10 or 12 or 14. And for whatever reasons, their families would have kind of disintegrated or, just not been there where their parents just couldn’t raise them. So, yeah, it’s pretty unbelievable that they were able to just kind of keep fighting and just to stay alive and just the luck of someone like, of a place like this Masonic orphanage in Fort Worth, just being there to be the last stop and the last chance for these not just boys, but you know, girls, too.

Before I let you go, I wonder if there’s one movie that you’ve made that people tend to bring up to you, whether it’s people you know, or maybe someone you run into on the street? I have a guess, but I’m curious which movie that might be?

It’s a few of them, I’d say. It’s always a different kind of person. I’ll get people that bring up Bottle Rocket, the first movie that me and my brothers and Wes Anderson made. And then, of course, there’s this movie Old School I made, which is kind of like, you know, an Animal House-type movie that was a hit that people seem to respond to. And then, of course, in the last few years, this movie I made with Mike Judge called Idiocracy gets brought up all the time and, you know, from people you wouldn’t expect. I ran into Jackson Browne, and he mentioned Idiocracy. And then someone was telling me that Axl Rose from Guns ‘n’ Roses is talking about Idiocracy. Which one were you thinking of? 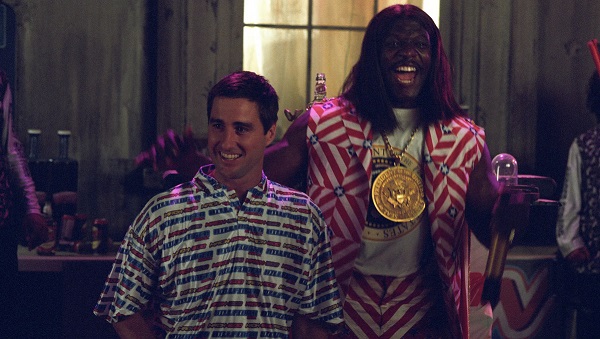 Idiocracy was my guess. And particularly within these last few years, I can’t go a month without something happening and someone saying, “Well, Idiocracy“. It’s become this shorthand for what we either evolved or devolved into.

Yeah, for sure. We made the movie, and it was one of those movies where it came out and 20th Century Fox for whatever reason, they just weren’t behind it and just kind of dumped the movie with no fanfare no premiere — it was on I think it may be seven screens. And then it just kind of caught on with people watching it, repeating the lines and telling friends about it. And then, Mike Judge had that same thing happened with Office Space, where the studio didn’t get behind it. And then people just through watching it really kind of got a kick out of it. But I can just remember when somebody in the last administration got hired, and they actually were an executive from Carl’s Jr. And there was somebody in Idiocracy that was a part of President Camacho’s cabinet that worked for Carl’s Jr. I think. So yeah, there’s been all those kind of funny little similarities from the movie to some things that have happened in the past, you know, decade or so.