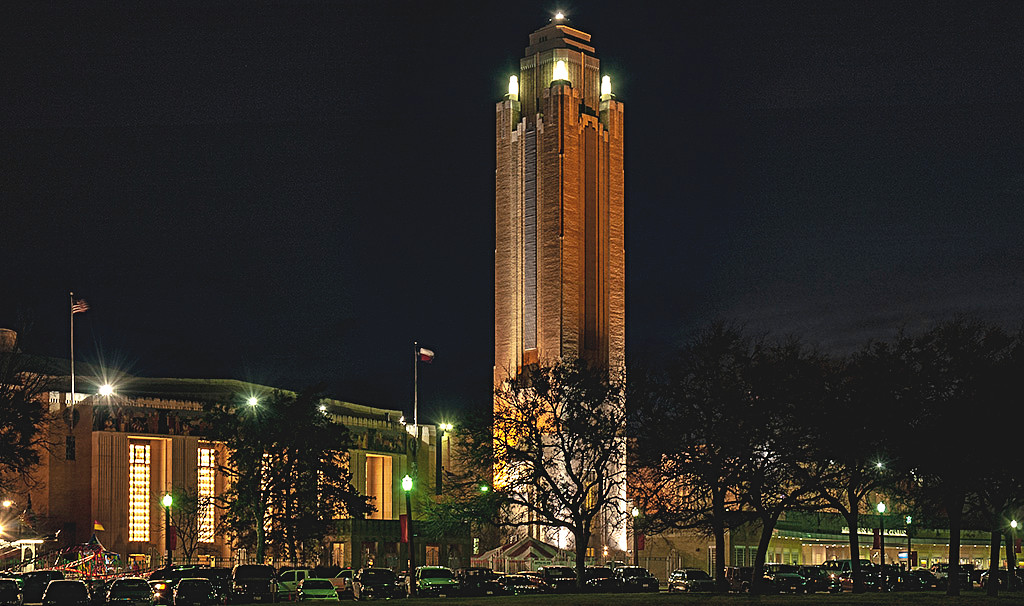 Pioneer Tower at the Will Rogers Center — before its current restoration. Photo: Fortwortharchitecture.com

Fort Worth is bubbling with public art projects – from major works coming to the cultural district to murals on renovated warehouses. Next Friday, Art&Seek’s Jerome Weeks will lead a conversation about the city’s plans for public art and what’s in the works with the new arts plan from 2017. In State of the Arts today, he gives KERA’s Anne Bothwell a preview of what’s new.

Part of the Arts Council of Fort Worth’s new plan calls to create four ‘iconic’ works around town. That’s a really exciting goal. It can be a way for a city to re-define its spaces, even to make us experience the city differently. And there’s one already under construction in the Cultural District.

It’s hard to miss. It’s the tower in the Will Rogers Center – called Pioneer Tower.  It’s around 19 stories tall – and it’s currently covered entirely in scaffolding because the city’s spending close to $4 million to renovate the building. It was built in 1936 for the Texas Centennial – just like Fair Park in Dallas. And just like Fair Park, it’s an Art Deco landmark.

There’s serious repair work going on but also some upgrading – they’ll be using LEDs to light it up this time, so it’ll be turned into this beacon in the Cultural District. But ironically enough, none of that is the actual art work, which was commissioned for $350,000. That’s going to involve video projections on all four sides of the tower.

The digital mapping of the Wyly Theatre during Aurora 2015.

So they are installing giant video screens?

No, it’s a process called digital mapping. It happens at a lot of European festivals — Europe is far ahead of us when it comes to the scale and complexity of these city-wide displays. There are dozens of online videos you can watch from cities like Brussels and London and Edinburgh where huge civic buildings are lit up at night and they’re turned inside-out or become giant electrical circuits or blueprints or cosmic, evolving shapes and colors.

Yeah, there has been something similar in Dallas – the Aurora Festival of Lights?

In fact, for the last Aurora, one of the curators was Doo Eun Choi, and she’s the curator for this project in Fort Worth. One of her challenges is that Pioneer Tower is fairly thin and tall for a projection surface. She’s going to have to gauge the right distances for viewing it and how projected images might distort angled up like that. But one of its great advantages, she said, is its surrounded by these big, wide, open spaces like the Kimbell lawn and the porch at the Amon Carter– a perfect showcase for a large-scale, public artwork..

“In a lot of cases nowadays,” Choi says, “people are not much in the public spaces. So that’s a way we wanted to bring people outdoor and try to trigger them to communicate together.” 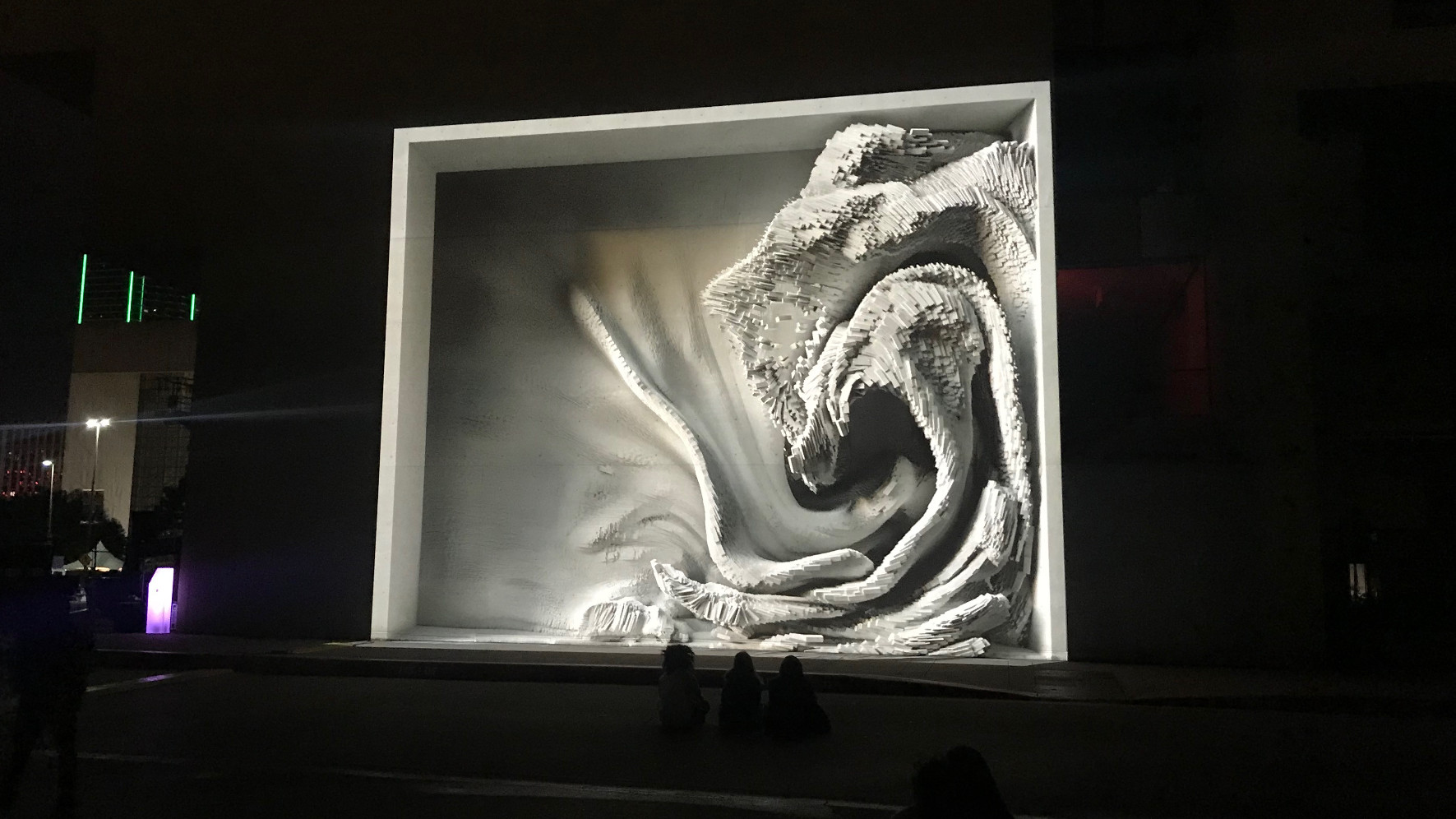 But what people haven’t fully realized yet, I think, is that this work is temporary. It’s only going to be up for a couple days. They’re hoping to save it for a big occasion, like a festival in the Cultural District in the next year or so. And if the projections work, if funding continues, they might do it again and eventually build up a library of video projections they can pull out as needed.

All right, that’s one of the big, iconic projects, but there’s a lot of other activity in public around Fort Worth.

Melissa Konur, who is the planning director at Downtown Fort Worth Inc, I think she said it best when she said public art can provide us moments of grace in our urban life. For instance, the Fort Worth Community Arts Center is planning to install three outdoor plinths – a plinth is the pedestal for a sculpture. And they’ll rotate artists’ works on these plinths. So they become an outdoor gallery. It’s an idea borrowed from London’s Trafalgar Square. The fourth plinth there has long been empty, but since 1999, every year it’s been used to showcase a new major outdoor sculpture.

Melissa Konur also said she was surprised by all this energy outside downtown, outside the Cultural District. “Fort Worth public art is fostering a richer environment for artists. I mean, I think, we’ve seen it around on the outside of downtown, really, it’s happened more there.  Where people are putting murals up on walls and just creating destinations with public art.”

And most murals are completely commercial deals, no city funding. These are not coming from any civic government. They’re quick, inexpensive ways for business owners to give older buildings, warehouses, factories a lot of visual snap.

But Konur suggested similar things could be done with, say, the tunnels that go under I-30 downtown — painting them or lighting them up. Public artworks serve a lot of functions besides high-minded notions of commemoration or expressions of civic pride. While they’re doing that, they can also serve as billboards of way-faring indicators. Attention-getters. Traffic signs.

Who’s making all of this artwork?

Not all public art is built to that iconic scale, for those function.  Benito Huerta teaches at UT-Arlington, and he’s created a number of sizable projects across North Texas, including one in DFW Airport and another on South Main (three images, top). Interestingly, he’s primarily a painter, but most of his public works have been sculptures or mosaics. He likes to use such commissions, he says, to push himself, do something different. He teaches a class on professional practices, and one thing he always stresses to his students, he says, is that “public art is not for every artist. First of all, you should be wanting to work with people outside your own discipline. So I’ve worked with engineers, architects, you have to work with the public art program. So you have to think of yourself as a collaborator.”

Lots of the labor by artists like Choi and Huerta – that goes into researching neighborhoods and locations and speaking with community groups. So with public art, we’re rarely encountering the vision of an individual genius being imposed on the rest of us. It’s actually their attempt to reflect community desires, recall its history, prompt conversation and reflection — to lend us a little bit of that grace that Melissa Kohur mentioned.

Whether that process leads to good or bad public art is also something we’ll talk about next Friday. 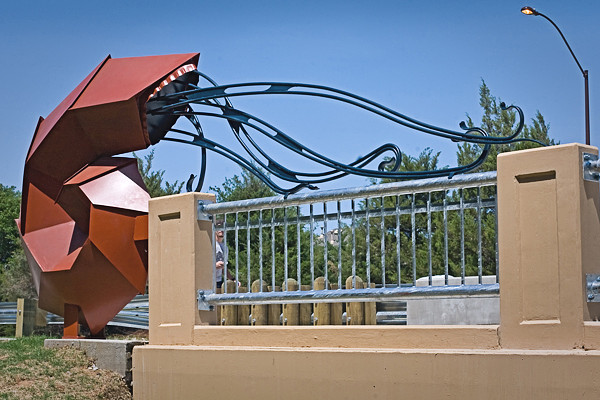 ‘Ammonite’ by Lars Stanley on North Riverside Drive – inspired by the ammonite fossile in the creek. Photo: Arts Council of Fort Worth