Skip Navigation
Home > ArtandSeek.net > Many Stages Are Still Dark, But You Can Now See These Iconic Costumes Up Close

The costume industry has been hit hard by the pandemic and many theaters are still dark in New York City. NPR freelance producer Jeff Lunden reports on the new exhibition in New York’s Theater District called ‘Showstoppers” that showcases many of the costumes from iconic Broadway shows. 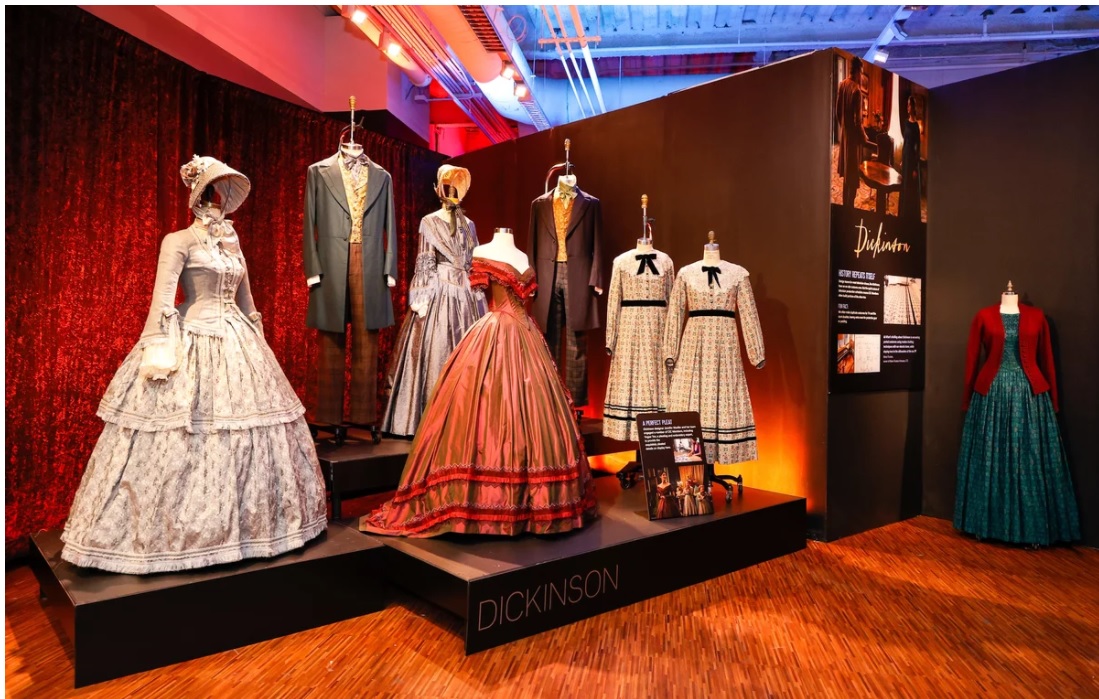 Jennifer Moeller’s hoop dresses from the television series Dickinson are among the costumes on display at the Showstoppers! exhibition in New York City. Photo: Arturo Holmes/Getty Images

The costume industry in New York was hit hard by the pandemic — over 500 people who work as patternmakers, stitchers, beaders, milliners and painters were idled, as theater and film production shut down. A new exhibition called Showstoppers!: Spectacular Costumes from Stage and Screen has opened on 42nd Street, in the heart of the theater district, to show off their work.

When you see a Broadway show, the costumes need to be visible from the front row of the orchestra to the back row of the balcony. “People don’t get to see them this close up,” says Brian Blythe, one of the founders of the Costume Industry Coalition, a group of 55 costume shops and businesses that service Broadway and film. They’ve sponsored the exhibition. He adds, “They’ve never realized that every single bead and every single bauble that’s on one of these costumes is hand placed.”

There are over 100 of these couture costumes on display, from Hamilton, to The Marvelous Mrs. Maisel, to Frozen. Blythe points to one of Elsa’s dresses from the Disney show. “When you look at the Frozen Ice Dress, the crystals involved and the mirrors and all of the beading that is on there, the weight of that dress is so heavy because it is so full of all of this ornamentation,” he says. 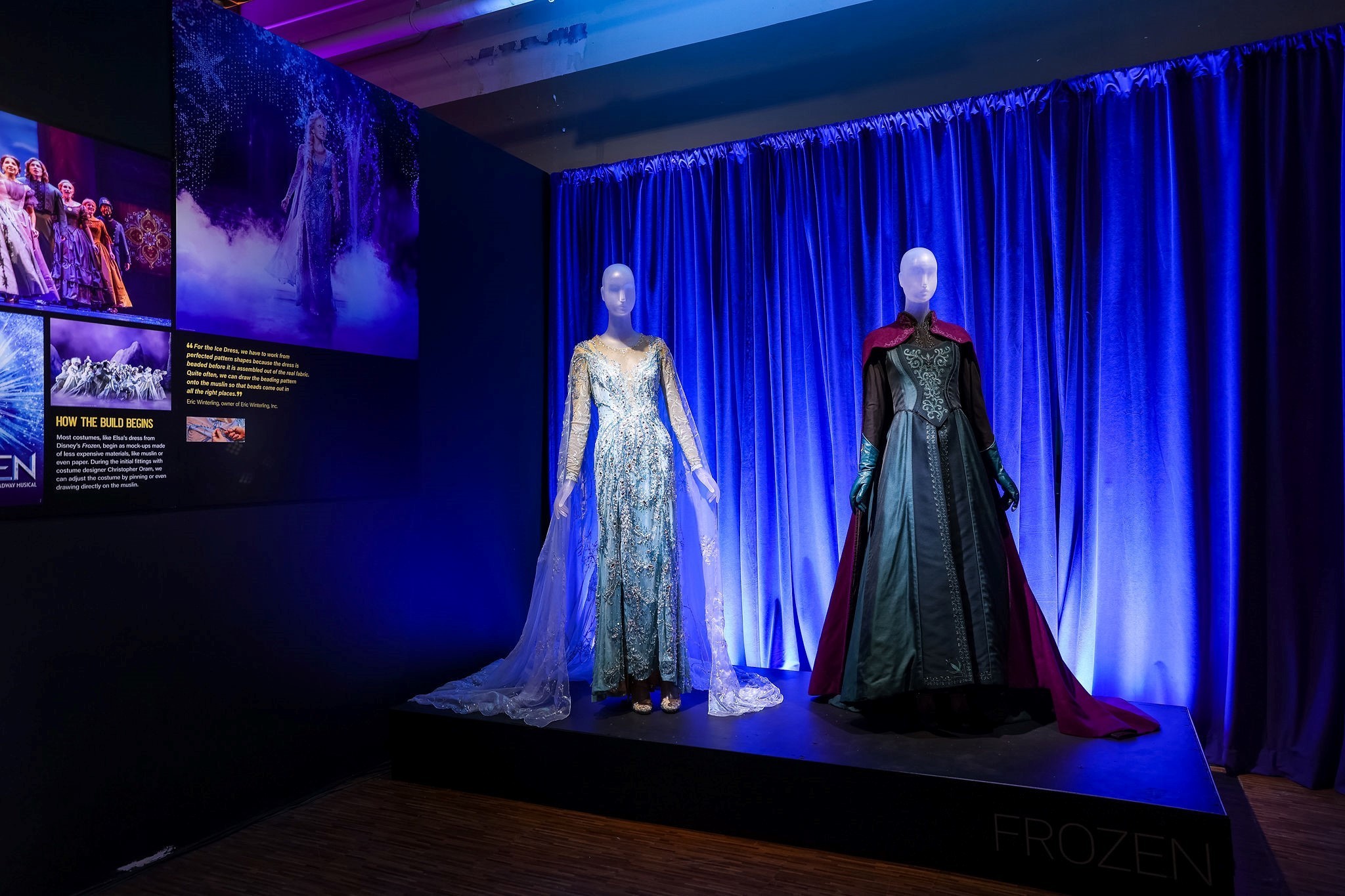 But the exhibition, which is installed in a former sporting goods store which went belly up during the pandemic, features more than costumes — as you walk through it, you can see people at work, making the real hats and clothes actors will wear onstage. On the afternoon I attended, I saw two people working on understudy costumes for the new musical, Six. 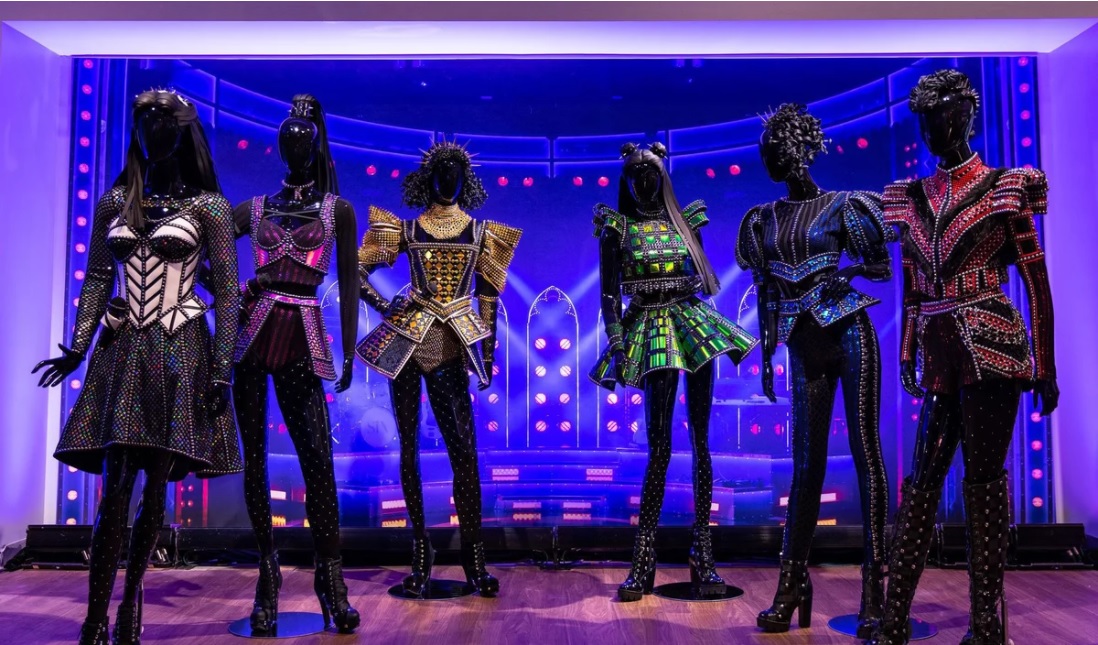 Meg Wheedon is a draper. “I’m in the process right now of correcting some patterns for the understudies,” she explains. “I’ve had a couple fittings. They’ve come in now to the city. And so now I’m taking their patterns and correcting them so that then we can cut it out of all the real fabrics.” 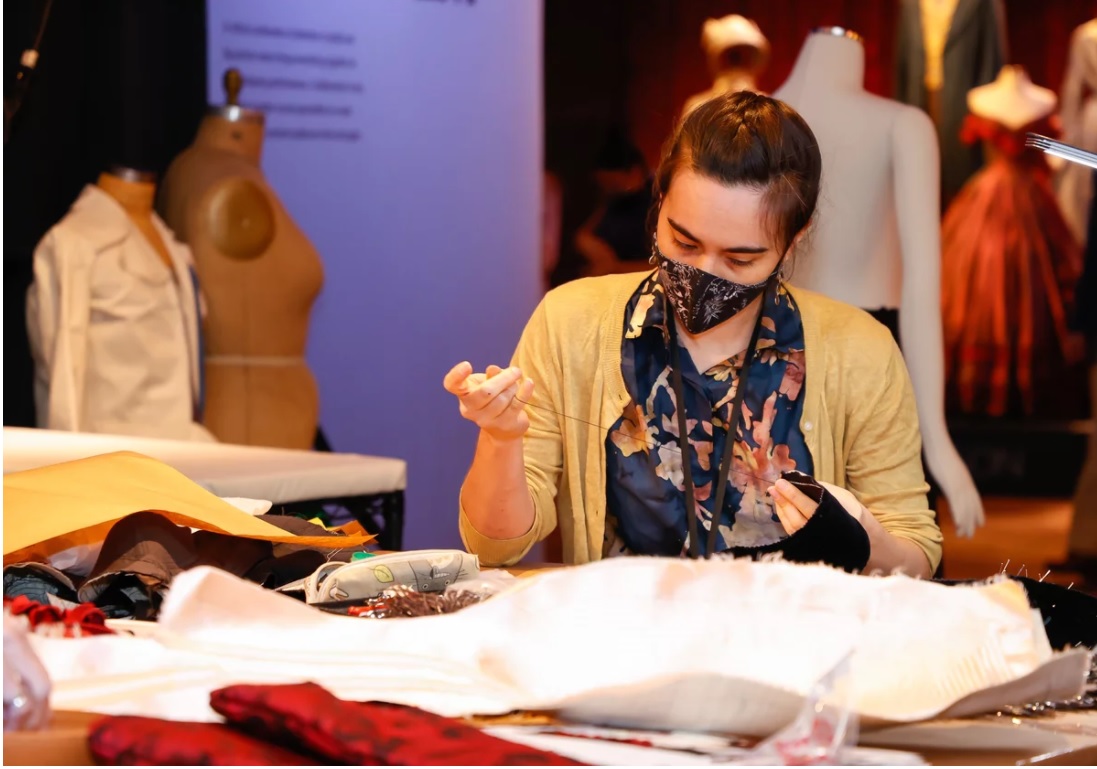 Elsewhere in the exhibition, I saw a glovemaker, embroiderers and a milliner, all plying their crafts. “I’m doing some wire bending for showgirl headdresses,” says Caleb Howell, at his station. In addition to making hats, he works as a Broadway dresser. “The pandemic was rough,” he says. “It really was rough.”

And the industry, which is 70% female and over a third immigrant, has been hurting, says Brian Blythe. “We’re over $3.5 million in collective debt and that debt continues to grow every month.” So, the proceeds from the show will help to pay it off.

Broadway fan Sarah Montana loved seeing the exhibition and supporting the costume shops. “It’s so cool to be able to see these things up close and personal and to see just how much goes into them, the thought process behind them,” Montana says. And she adds, laughing, “It was great to actually do the interactive downstairs and play with sequins!”