Waves of adults and children passed through the Pleasant Grove library to make and enjoy art this weekend at the first of six pop-ups hosted by Make Art with Purpose (MAP).

The series of pop-ups is the organization’s second triennial, “MAP 2016: Use Your Voice.” In a number of events inside the library and outside, in MAP’s Mobile Pavilion, people of all ages took part in visual and performing arts workshops. 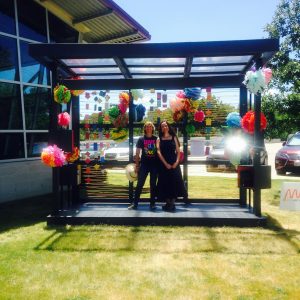 Other workshops in the series will take place downtown in the heart of the arts community, according to Janeil Engelstad, MAP’s founding director, but this was an attempt to reach out to other parts of the city.

“We wanted to produce something that feels like it’s a weekend festival,” says Engelstad. “They don’t have to come downtown, we’ll come to them.”

She says the workshop drew a wide diversity of participants.

“I spoke with recent immigrants from Asia and the Americas and others about the need for these kind of spaces where we come together in a positive light, connecting and celebrating life through art.”

On Friday, Sarita Westrup and Analise Minjarez of Tierra Firme led a workshop for children in drawing, collage and painting with natural dye watercolors. Tierra Firme participated as part of Oil and Cotton‘s partnership with MAP 2016.

Westrup and Minjarez work primarily in Oak Cliff and downtown Dallas, leading workshops and using art to educate people about issues surrounding immigration and the border with Mexico, symbolized by the netting they use in their workshops. 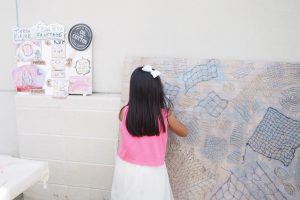 The Tierra Firme workshop at MAP 2016 let children explore ideas about the landscape with natural dyes and netting board. Photo: Tierra Firme

“The concepts were landscape, portals and barriers,” says Westrup. With the children, they focused on the idea of landscape, and our relationship to them, using cochineal natural dyes and oil pastel rubbings on netting board.

For them, working in Pleasant Grove with MAP was a powerful way to hear new voices around the topics they’re interested in, especially the Texas-Mexico border and its impact on various communities.

“A lot of artwork is a display of perspectives,” says Minjarez. “We were really interested in hearing what people think and feel about these issues around the city of Dallas, because these perspectives are really valid.” 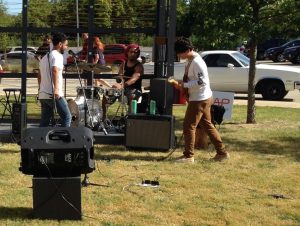 The next day, adults took part in a poetry and spoken word workshop with Darryl Ratcliff. In the afternoon, the Mobile Pavilion hosted the debut performance of the Pleasant Grove band “Young Americans.” In the evening, open mic and interactive spoken word group DaVerse Lounge performed on the pavilion.

“Young Americans” is made up of Guillermo Munoz and Oscar Martinez, both 18. Munoz is an alum of Skyline High School, which has joined forces before with MAP, most recently to build a bench at Ferris Plaza. Engelstad employed other recent Skyline alums to help with the weekend, and she says much of the plan for this pop-up came after discussing with them what they thought would add value to the community.

“We tried to bring in new voices and new artists as well as feature local ones,” says Engelstad. “It’s this mix of more organized activity and very grassroots activity.” 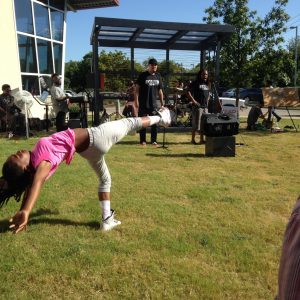 Engelstad adds that the workshop not only helped bring together neighborhood members through art, it also served to connect them to resources, thanks to the partnership with the library. During the program, with the help of Heather Lowe, head of arts programming for the Dallas Public Library, they were able to connect a father recently released from prison to career and counseling services, as well as several mothers at the workshops to Dallas HIPPY, a home-visiting program.

The pavilion was designed by Hoefer Wysocki Architecture and will be used in the rest of pop-ups, which will continue through November. The next is August 12 through 14 at the Dallas West Branch of the Dallas Public Library.