Skip Navigation
Home > ArtandSeek.net > ‘Martyr’ Is Smarter Than This – Also, The Musical Vermeer At The DMA 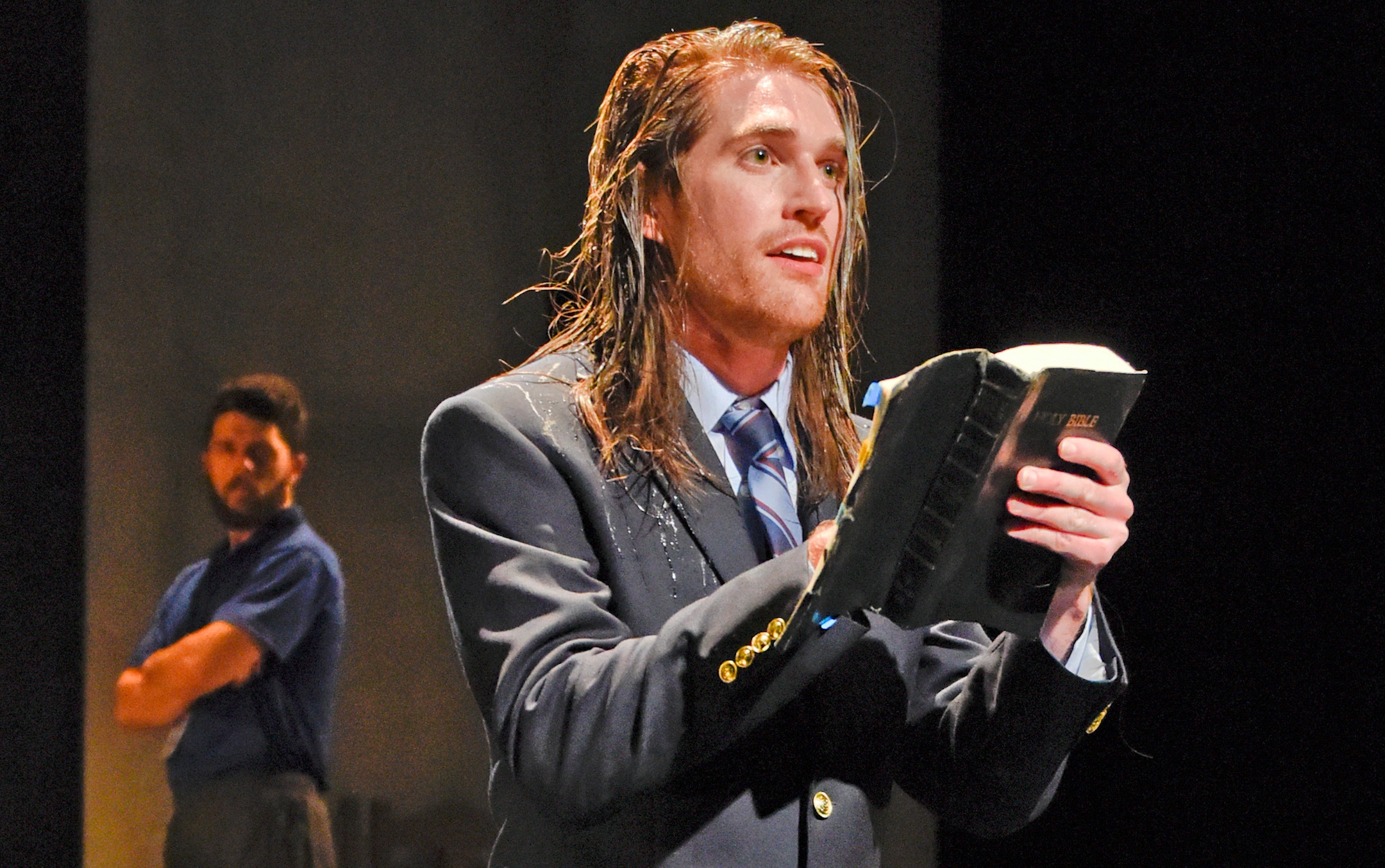 With suicide bombers in the Middle East and self-professed terrorists attacking in France and the US, Second Thought Theatre’s staging of the play ‘Martyr’ couldn’t be more timely. But the religious militancy preached here actually comes from a young Christian — although playwright Marius von Mayenberg clearly intends him to mirror Islamic extremism. KERA’s Jerome Weeks sat down with Justin Martin to talk about this Texas premiere of a German play.

It’s rare, isn’t it, for a contemporary German play to move from a world premiere in Berlin and then, within two and a half years, being staged in Moscow, Paris, London, Chicago and now Dallas?

JW Yeah, it’s very rare. It’s happened with ‘Martyr’ – I think – because religious fanaticism is a huge, timely issue, obviously, in both Europe and the US, and playwright Marius von Mayenberg has taken a different tack with it. Rather than portraying a young Islamic extremist, Mayenberg creates a Christian one. Benjamin is a student who won’t even get in the pool in phys ed class because the female swimmers aren’t modestly dressed. And at one point, Benjamin expresses admiration for suicide bombers — they’re warriors for their religion. So it’s clear, Mayerberg explicitly links the two. Suicide bombers are willing to die — and kill — for their faith, and so is Benjamin.
‘Martyr’ at Second Thought Theatre runs through Feb. 6. ‘Vermeer Suite: Music in 17th Century Dutch Painting’ at the Dallas Museum of Art through Aug. 21

Is that what happens?

JWI’m not going to tell you! No, that’s not exactly what happens. Mayenberg uses Benjamin to satirize our wishy-washy Western tolerance. His mother, his teachers, fellow students, the school administration – they all bumble around while he preaches hellfire.

But Benjamin is also a rebuke to anyone who thinks Islam is preaching violence while Christianity is entirely peaceful. Benjamin has this unpleasant habit of justifying his actions by quoting the most dogmatic, bloodthirsty passages from the Bible, the ones where prophets call down death and destruction on the enemies of the Israelites. Benjamin even  finds a fair amount of intolerance in the New Testament as well. This is Garret Storms playing Benjamin and Alison Pistorius as his biology instructor. She tried to teach a sex ed class, and he objects. That’s St. Paul’s first letter to Timothy he quotes at the end.

Wow. So how did the audience react?

JWThat’s a good question. Let me answer it this way. Mayenburg is known for his brutal view of human relationships, so this angry clash is typical. And Mayenburg seems to view adolescence itself as a kind of extremism. It’s self-absorbed, it’s self-righteous but also full of doubt and fear. So given all this with ‘Martyr,’ things do go over-the-top. But I think the play is smarter and more subtle than what director Blake Hackler has made here. Outside of Benjamin, and his sad little follower, George – outside of them, everyone is a cartoon – they’re either shrill or silly or they resort to their own extremism. Yes, as I said, ‘Martyr’ has elements of satire, but it’s typical of Hackler’s direction that he takes a scene of attempted seduction – which in the script is fleeting and ambivalent in its physical contact — and he turns it into a full-scale wrestling match. So to get back to your question, I don’t think we often know how to respond, whether to laugh or not.

So they didn’t know whether to take something seriously?

JWRight, the play is stylized to a degree, and Hackler underscores that in his direction — it’s Brechtian at times, with the actors all cackling loudly offstage at the start — perhaps giving us our cue — or they move in deliberately stilted fashion to call attention to ‘this is a play, this is not real.’ In productions in other cities — like Chicago — the actors would even use a classroom chalkboard to write the titles for each scene as they started.

But the Second Thought Theatre’s physical production itself is handsome and sharp. Darren Diggle’s set design and Aaron Johansen’s lighting evoke the famous Rothko Chapel in Houston – with its austere simplicity, suggesting a kind of smooth, stone spirituality. Frankly, I wish the rest of the show were as attractive. It should be noted there are two stand-out performances. Garret Storms — who’s often seem actor-y to me in the past — plays Benjamin with complete, full-tilt, hot-headed conviction, while Ruben Carrazana plays his sidekick George as the complete opposite, an insecure mouse. George is so beaten down and closeted, he’s just grateful for any attention Benjamin gives him. Carrazana is a sadsack clown.

But because everyone else, by the end, has gone to their own extremes, there’s little that feels fully at stake. Martyrs and suicide bombers are all about raising the stakes. They take what seems an unimportant issue to the rest of us — proper attire for young women swimmers — and push it into a matter of life-or-death. But in the Second Thought production, when gruesome violence does break out at the end and everyone’s yelling and arguing, little feels really at stake because the people don’t feel truly real. 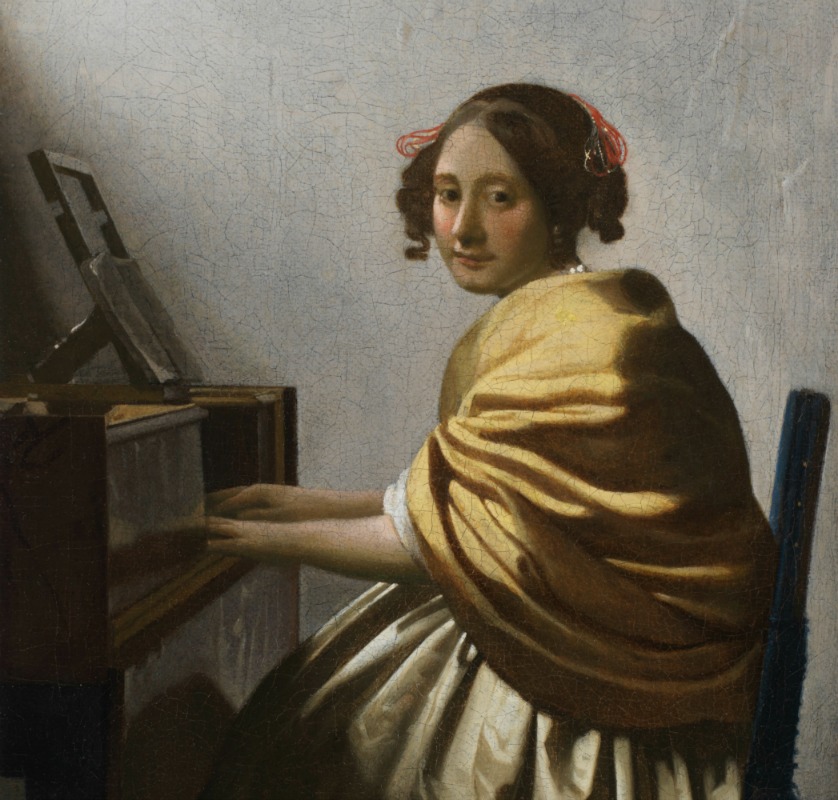 I find this fascinating, but anything else open last week?

JW‘The Vermeer Suite’ at the Dallas Museum of Art. It’s a little show, only eight paintings, and all of them are little as well, nothing’s bigger than a typical sheet of paper.

And you’re playing music because that’s why it’s called a ‘suite’?

JWRight, a suite, a musical collection built around this single Vermeer painting. The artworks are all from the Golden Age of Dutch painting, the 17th century, the age of Rembrandt and Vermeer and Frans Hals. And that period was obsessed with playing music. What I played is a toccato for harpsichord, performed by Robert Woolley and composed by Dutch composer Jan Pieterszoon Sweelink, whose music Vermeer could very well have heard.

So each painting features a musical instrument of some kind — lute, flute or virginal (a kind of harpsichord). Showing off your harpsichord in a portrait was a sign of breeding and class. Playing music was also an amorous sign — a couple playing a little duet together. It was also an entertainment in a brothel, a sign of dissipation. Women are shown playing a lute, for instance, but there’s another instrument nearby — implying someone’s coming to play with them. Music symbolized so much to the Dutch. The use of symbolism added texture to their paintings. It seems counterintuitive but it probably has to do with the Protestantism that ruled the land: The Dutch developed such a strong emphasis on warm, clear, highly detailed realism, yet at the same time, their artworks are rife with symbols, with a language of hidden meanings. The entire subject of Dutch paintings and music and what it meant has been a popular one in recent years, including a major exhibition at the National Gallery in London three years ago. The DMA show is like a pocket version of that show.

Not to be blunt, but why do we care?

JWOh. Well. Did I say one of the paintings is a Vermeer? There are only 36 in the world. This one, a young woman at a keyboard, is not one of Vermeer’s masterpieces. It’s a late Vermeer, the third one he painted with this as a subject, and it doesn’t have the incredible visual richness of his earlier ones. But as curator Olivier Meslay pointed out, the DMA simply doesn’t have much from this period. The Kimbell has a Rembrandt and a small handful of other excellent examples of Dutch painting: a landscape, a seascape, a churchscape. But the DMA’s borrowing this little group from the Leiden Gallery — the remarkable private collection in New York owned by entrepreneur Tom Kaplan — gives us a chance to see some of these Dutch masters.

So hey, it’s a Vermeer