Editor’s note: As local arts venues are still dealing with how to keep guests safe from COVID, add one more concern: guns. A new Texas law goes into effect Sept. 1 that allows people 21 and older to carry a gun in public without a permit. KERA and The Dallas Morning News are collaborating to learn how venue leaders are preparing for this change.

Mary Pat Higgins, president and CEO of the Dallas Holocaust and Human Rights Museum, is concerned.

“This new law has us — has me — concerned about the safety of Texans in their daily lives,” says Higgins, referring to the hottest talking point now enveloping the Lone Star State: The sweeping new gun law that takes effect today.

The law, signed by Gov. Greg Abbott in June, will allow permitless carry of handguns for citizens 21 and older — if they have a clean criminal record. Those who qualify will be able to carry a concealed handgun or carry one in public, if holstered.

From the moment he approved the law, Abbott’s pro-gun blessing sent shock waves through a state that, since 1982, trails only California and Florida in mass shootings.

The Washington Post reported on July 7 that more than 1,800 people had been injured or killed in mass shootings in the U.S. in 2021. The Brady Center to Prevent Gun Violence noted recently that, “every day, 316 people are shot” nationwide.

Law enforcement agencies have been among the fiercest in opposing the Texas law.

But when he signed the bill, Gov. Abbott framed it in philosophical terms, using language he’s applied to such issues as mask mandates or demanding proof of vaccination.

“You could say that I signed into law today some laws that protect gun rights. But today, I signed documents that instilled freedom in the Lone Star State.”

But for cultural organizations spread across the nearly 300,000 square miles of Texas, “freedom” is the last word they’re using.

For hundreds of such companies, already reeling from the pandemic and simply trying to hang on, the new gun law adds yet another layer of complexity and confusion.

Since its opening in 2017, the Holocaust museum has used airport-style metal detectors to maintain security. As a private institution, the museum will continue to ban guns.

Even under the new law, private museums and performing arts venues have the legal right to do so. They are shielded for the most part by the loopholes that allow private companies to restrict guns by posting required signage in a visible manner. The signs must be written in both English and Spanish.

But communicating that right to guests means having to do even more work during an already peak era of stress.

“We just have to add some additional signage, which we are doing,” Higgins says, with a sigh.

Signage that covered concealed carry and open carry had been in place for years, but now, the museum has to post signage banning unlicensed carry.

“It’s a third level of signage,” Higgins says. “You have to have three different signs that cover all of the different ways of carrying a weapon.”

It remains a sensitive issue, Higgins contends, “because we are a target for hate groups. We fear that there will be an increase of people wanting to bring guns into the museum, so we’re prepared for, shall we say, more difficult conversations, explaining to people why they can’t do that.”

Higgins, of course, is hardly alone. Newly installed signage is popping up in Texas faster than bluebonnets in March — from gyms to supermarkets to museums and arts venues, all stating that guns are outlawed beyond their doors.

And yet, apprehension about the impact of the new law is as pervasive as the other spreading concern — the delta variant. 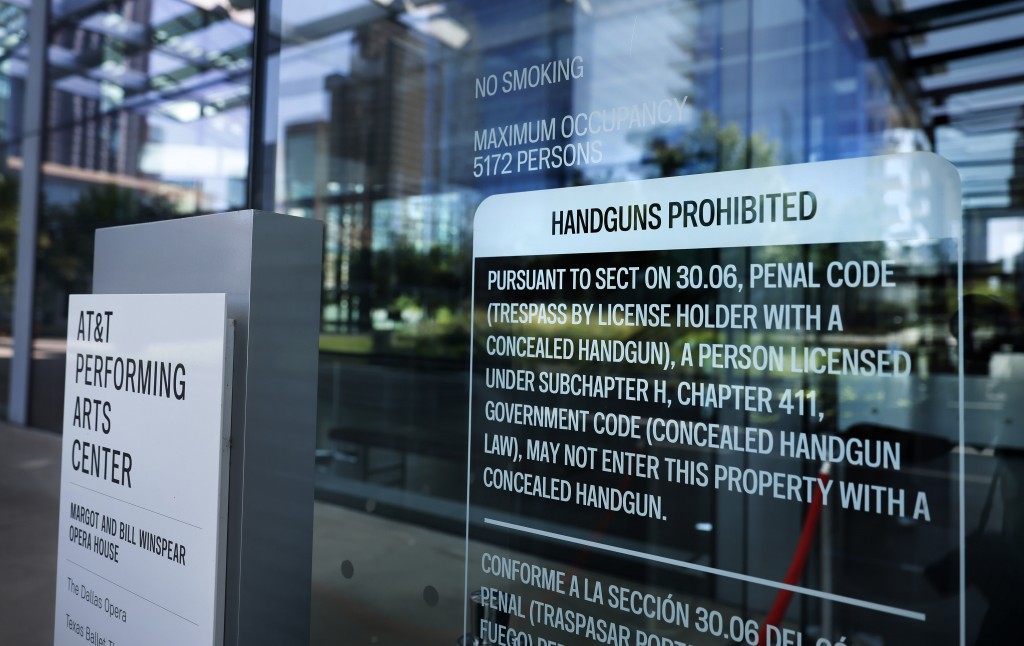 Debbie Storey, president and CEO of the AT&T Performing Arts Center, says Sept. 1 has added to the level of anxiety.

“We have artists and patrons who are expressing concern,” she says. “So, yes, we’re taking all the right steps to ensure the safety of everyone who works in or visits our venues.”

The Center is owned by the city of Dallas, so it’s self-managed and therefore allowed to restrict weapons by posting signs.

As an added precaution, ATTPAC screens for weapons at each of its venues by using metal detectors.

“We back that up with hand wands and bag searches if the magnetometer indicates that there is something that needs to be checked,” Storey adds.

For the first time in its history, Dallas Summer Musicals installed airport-style metal detectors for its current run of Wicked, the first Broadway show to go on tour since the beginning of a nationwide lockout in early 2020. 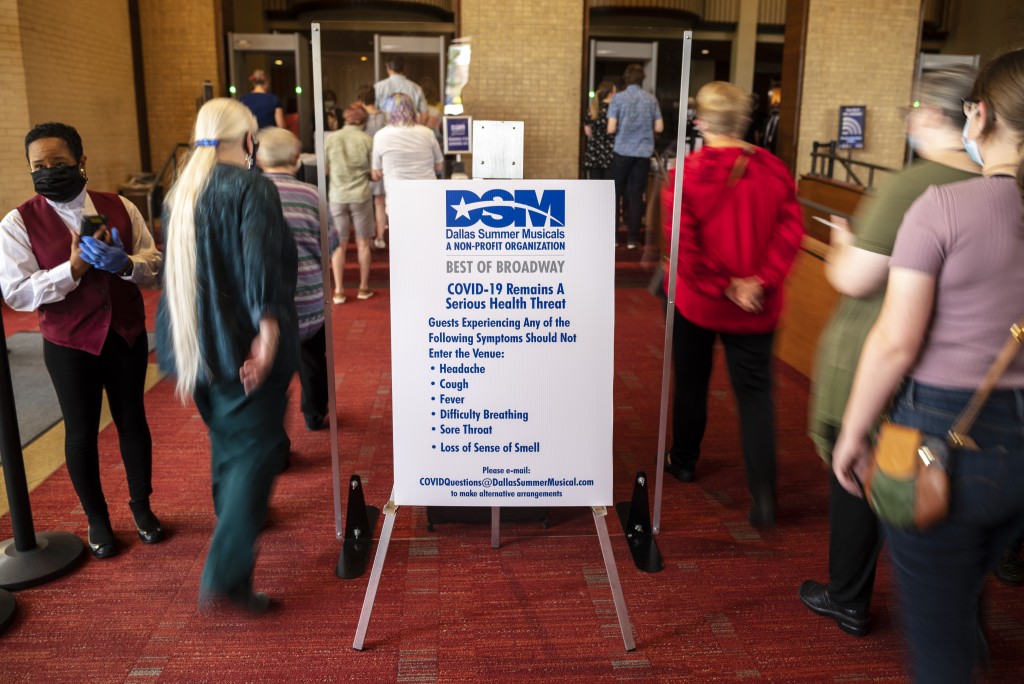 For the first time in its history, Dallas Summer Musicals installed airport-style metal detectors (in background) for its current run of Wicked. (Photo by Ben Torres | The Dallas Morning News special contributor)

The Music Hall at Fair Park has a capacity of 3,420 and is selling out most of its Wicked shows, which DSM officials say may bring in as many as 125,000 people by the time Wicked wraps up its run Sept. 5. That’s more than the capacity of the neighboring Cotton Bowl, which seats 92,100.

Kenneth T. Novice, president of Dallas Summer Musicals, says the venue has also made other “enhancements” that may make it feel like going to a sporting event. For example, limiting bags to small purses or larger clear ones and prohibiting backpacks.

The Music Hall is owned by the City of Dallas but operated by Dallas Summer Musicals. The same applies to ATTPAC and the Meyerson Symphony Center, which is city-owned but operated by the Dallas Symphony Orchestra. The DSO is also in the process of adding new signage.

“We will notify our patrons that they’re not to bring weapons into the building — guns specifically, but all weapons really,” says Kim Noltemy, DSO’s president and CEO.

Although the orchestra does not plan on screening its guests for weapons, Noltemy says the DSO will employ “beefed-up security keeping an eye out for anyone we think would be violating that policy. Law enforcement is able to notice things that, say, you and I would not notice.

“And hopefully between all of that we will be successful in having our patrons not even think for a moment about this, which is the goal. Because who wants to be thinking about things like that while enjoying a concert?”

The Sixth Floor Museum at Dealey Plaza installed metal detectors when it opened in 1989 but removed them years ago, says CEO Nicola Longford. Nor does it plan to bring them back, even with the new law.

“The Sixth Floor Museum will continue with its current practices,” she says.

Existing signage bans weapons in the building and that, Longford says, will be enough to address the new law. “We feel that what we have is very clear.”

Dione Kennedy, president and CEO of Performing Arts Fort Worth Inc., the nonprofit operator of Bass Performance Hall, vows that her organization “will continue to screen for weapons.”

History of gun rights in Texas

Despite the restrictions, the new Texas law is gaining attention across the country for the magnitude of its sweep. It sets a new — and highly controversial — standard for allowing people to carry guns openly in public.

To be clear, section 46.03 of the Texas Penal Code will continue to prohibit guns in these locations:

Even in the face of these remaining restrictions, gun-rights activists are praising the new law, saying they hope similar statutes will be adopted in other states.

The new gun law is the latest in a wave of pro-gun legislation. Texans have had the right to carry a gun in public since 1995, when then-Gov. George W. Bush signed concealed carry into law. In 2007, the Texas Motorist Protection Act made it legal for people without a handgun license to keep a firearm in vehicles. The state legislature authorized guns on state university campuses and open carry in 2015. But you still needed a license to carry a gun outside your home or vehicle.

Now Texans can legally own a firearm and carry it — in a holster — in public, for the first time since Reconstruction. Texas joins 19 other states in adopting what supporters call “constitutional carry.”

“Texas is finally a pro-gun state despite years of foot-dragging, roadblocks, and excuses from the spineless political class,” Texas Gun Rights executive director Chris McNutt said in a statement after Abbott signed the bill. “I’m proud of the work grassroots gun owners have put in to get Texas Constitutional Carry finally signed into law.”

But as Kevin Lawrence, executive director of the Texas Municipal Police Association, told The Texas Tribune:

“When it comes down to it, it’s just a sense of disappointment that the bill ultimately was passed.”

He won’t get an argument from many North Texas arts venue leaders, who — in addition to managing COVID masking and vaccination guidelines — now have another rule to oversee for the sake of safety.

A version of this story aired on KERA-FM (90.1) and appears on dallasnews.com.