A mural project is at a standstill in Fort Worth and the pause is prompting local artists to call for more just treatment and pay.

Artists will gather Saturday in support of  muralist J.D. Moore, who was painting a city commissioned project for free. Moore said a City of Fort Worth official threatened him with a trespassing citation if the artist tried to finish the project.

Moore is nearly done with the mural. He says the City of Fort Worth’s Graffiti Abatement program approached him last Fall to paint a series of murals on the North Henderson Street Bridge. He was given supplies and paint, and he volunteered to complete the mural for free.

“By November, I had signed the agreement to do the work,” Moore said. “I had created renderings of all the artwork, the portraits. I’ve got my theme organized and explained. At this point, it’s been approved by a chain of command.” 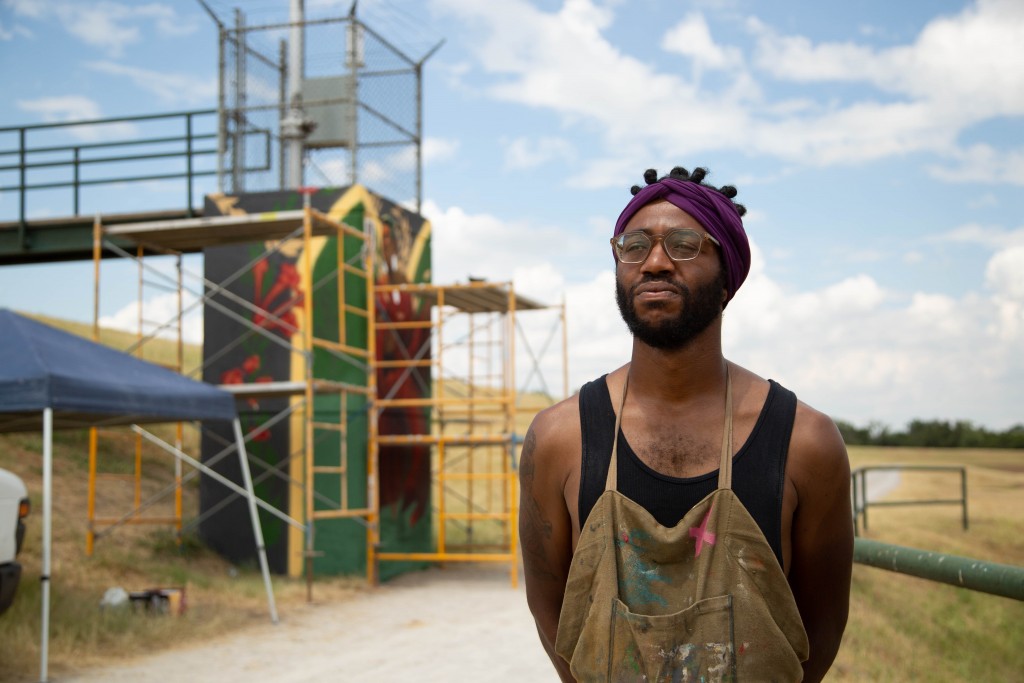 Black subjects, especially women, are typically at the forefront of muralist J.D. Moore’s work. This mural of his sister located by the Trinity River in Fort Worth was commissioned by the Tarrant Regional Water District in 2020. Photo by Keren Carrion

Much of Moore’s practice focuses on honoring and portraying Black people, and this mural was no different.

Moore alleges that the mural’s almost exclusive use of Black subjects was a concern for Michael Tovar, a superintendent with the city’s Parks and Recreation department.

Moore says Tovar suggested recasting one of the mural subjects as a Chinese person or to lighten one of the subject’s skin tone. Tovar told Fort Worth Weekly he was protecting the city from false accusations of racism. (KERA has reached out to Michael Tovar and the City of Fort Worth for comment.)

“I’m not going to make up a person who is supposed to look Chinese for the sake of doing that because that would be disingenuous to my art practice, which is using photo references,” Moore said.

This week, Moore received a call from Tovar, who allegedly told the muralist he was taking too long to complete the project and the city would be replacing him with another artist. Moore says he originally gave the Graffiti Abatement program an estimated date of completion, but he has no written agreement concerning a hard deadline.

Additionally, Moore said, during their call, Tovar warned Moore that he could receive a trespassing citation if he returned to the work site to continue painting. Tovar told Fort Worth Weekly he did not threaten Moore, but he also could not “recall” mentioning a trespassing charge.

On Friday, the Dallas Morning News reported the Parks department reversed its decision, and is offering Moore the chance to finish the mural with a new deadline of May 8.

Moore has since received a wave of support from other local artists after he took to social media to share details of his ongoing row with the city. Many have expressed outrage over the city’s use of local talent without compensation for beautification projects. Moore said he’d like to finish the mural, but that the Graffiti Abatement program needs to treat its artists more fairly moving forward.

“It’s been bastardized into a program that takes advantage of free labor from artists,” Moore said. “I feel like I’ve been exploited with no regard or concern for the integrity or quality. It’s just about a bottom line.”