The Dallas Holocaust Museum has a new home, a new name, and a new mission.

Want to attend the grand opening of the Dallas Holocaust and Human Rights Museum? Well, they’re giving away free tickets on the morning of September 18th. Head here for details.

In this week’s Art&Seek Spotlight, we connect with the museum’s leadership to discuss why they decided their visitors needed to learn about more than just the mass murder of Jews during World War II. And they told us that they think all the genocides that have happened since the 1940s are part of a larger human rights struggle.

When the doors to the new Dallas Holocaust and Human Rights Museum open next week, local Holocaust survivors will fulfill a decades-old vision.

“Well, in some ways this is a dream 40 years in the making,” says Mary Pat Higgins. “The survivors who made their home in Dallas started talking about building a memorial in the late 70s.” 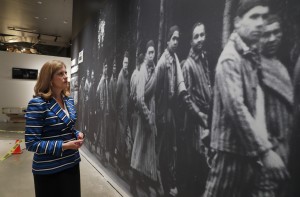 Mary Pat Higgins, pauses as she gives a tour to look at a wall-size image of Jews marching.
Photo: AP Photo/Tony Gutierrez

Higgins is the museum’s president and CEO. And for the past seven years, she’s led a mission to move the museum from its old 6000-square-foot facility to a new building that’s nearly 10 times larger (55,000 square feet).

“It’s been such an honor realizing the legacy of our survivors, but also working with the community to expand the original vision,” she says.

Higgins says the new museum’s radically different from its predecessor. And she’s right. To start, the museum is outfitted with a bright and spacious lobby and a courtyard featuring a stunning sculpture by Texas artist James Surls.  The space also has a special exhibitions gallery, a library, classrooms, and a theater. 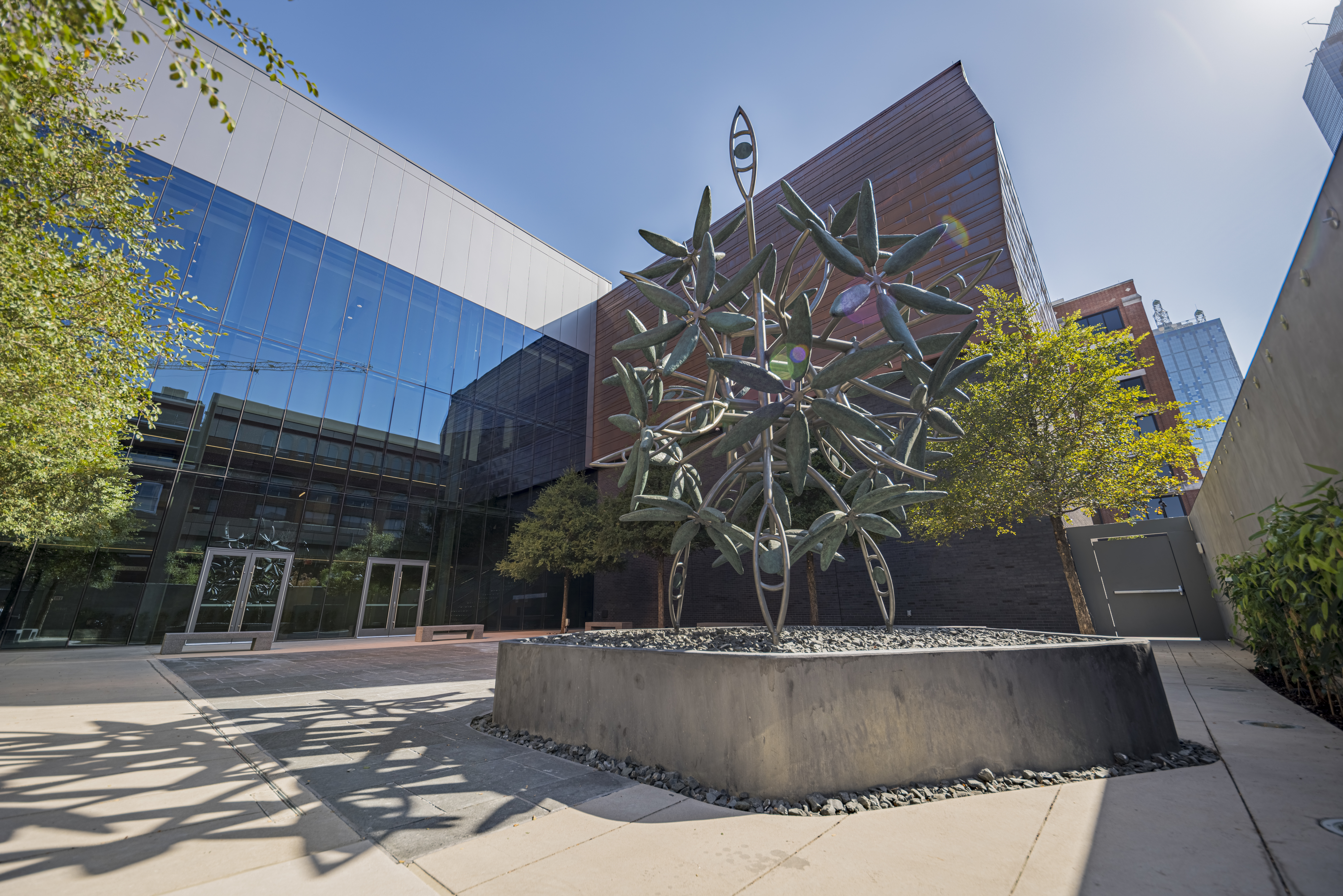 This Place, Everywhere (2019), a sculpture created by Texas artist James Surls. The sculpture’s six-petal flowers represent the six million Jews murdered during the Holocaust. The sculpture’s eighteen flowers represent Chai, the Hebrew word for life. Eighteen eyes are also interspersed throughout the sculpture, either looking down at the past and what was lost, or upwards to envision better lives for future generations.
Photo: Courtesy Dallas Holocaust and Human Rights Museum

“You know, we had a tiny theater in our old museum,” Higgins says. “Many of the events we held, we had to have off-campus so to speak. Our new museum has a 250-seat, beautiful, state-of-the-art theater that Cinemark fully furnished for us. And we have overflow capacities.” 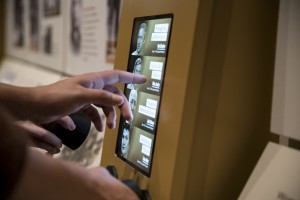 Touch screens, like once in this photo, are everywhere in the museum’s permanent exhibition. They let you hear from survivors like Max Glauben.
Photo: Courtesy Dallas Holocaust and Human Rights Museum.

The theater will host two signature speaker series and screen films. But the star of the museum is its permanent exhibition. It’s filled with testimonies from Dallas-area survivors and opportunities to interact with history. For example, visitors can step inside a restored boxcar, like the ones used to transport Jews to death and concentration camps. Here’s a quote that was said by a survivor from inside the boxcar:

“It was the loudest place you’ve ever been,” says a survivor from Poland. “Some of them would say the Shema. And some would say, “Why is this happening?!” And some people went berserk!”

That man was only one of the voices you can hear while standing inside of the boxcar. Each person has their own story. And all of them are heartbreaking. Higgins says these testimonies are important educational tools. That’s why they’ve collected so many. And hearing these actual voices personalizes the experience.

“You know Max Glauben told me a story once about being inside of a boxcar on its way to a concentration camp,” says Higgins. “And he said that people had to stand with their mouths open towards the ceiling because of the masses of people that were shoved [in the boxcar] and the lack of ventilation. He said the only water they could drink was the sweat or moisture dripping from the ceiling. And it’s impossible to imagine doing that to a human being.”

The museum wants people to have the opportunity to hear those stories. And now, thanks to a partnership with USC’s Shoah Foundation, founded by three-time Oscar winner Steven Spielberg, Glauben will be able to tell his chilling life story via hologram.

The exhibition doesn’t concentrate only on Jewish trauma. It also explores the roots of Nazism across Europe during the 1930s and 40s. And that means audiences are forced to come face-to-face with the hateful world views of Adolph Hitler. 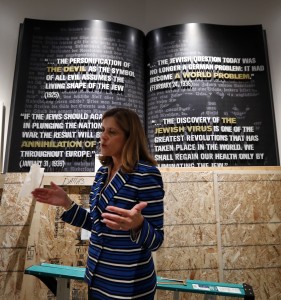 With quotes from “Mein Kampf ” and German Flags and swastikas, this part of the exhibition is intense. And it’s meant to be. Higgins says to learn from our past, we have to examine the ugliest parts of it.

“To, you know, have that level unchecked hatred and turn the rest of the German population against their neighbor is worth studying. The Holocaust really is a paradigm of genocide,” Higgins says.

The Holocaust isn’t the only example of unspeakable human cruelty. So the museum’s dedicated an entire gallery to 10 other examples of genocide. It identifies conditions, such as discrimination and persecution, that always precede mass killings. And it shows how those conditions existed at sites of genocides in Cambodia, Uganda, and Bosnia. 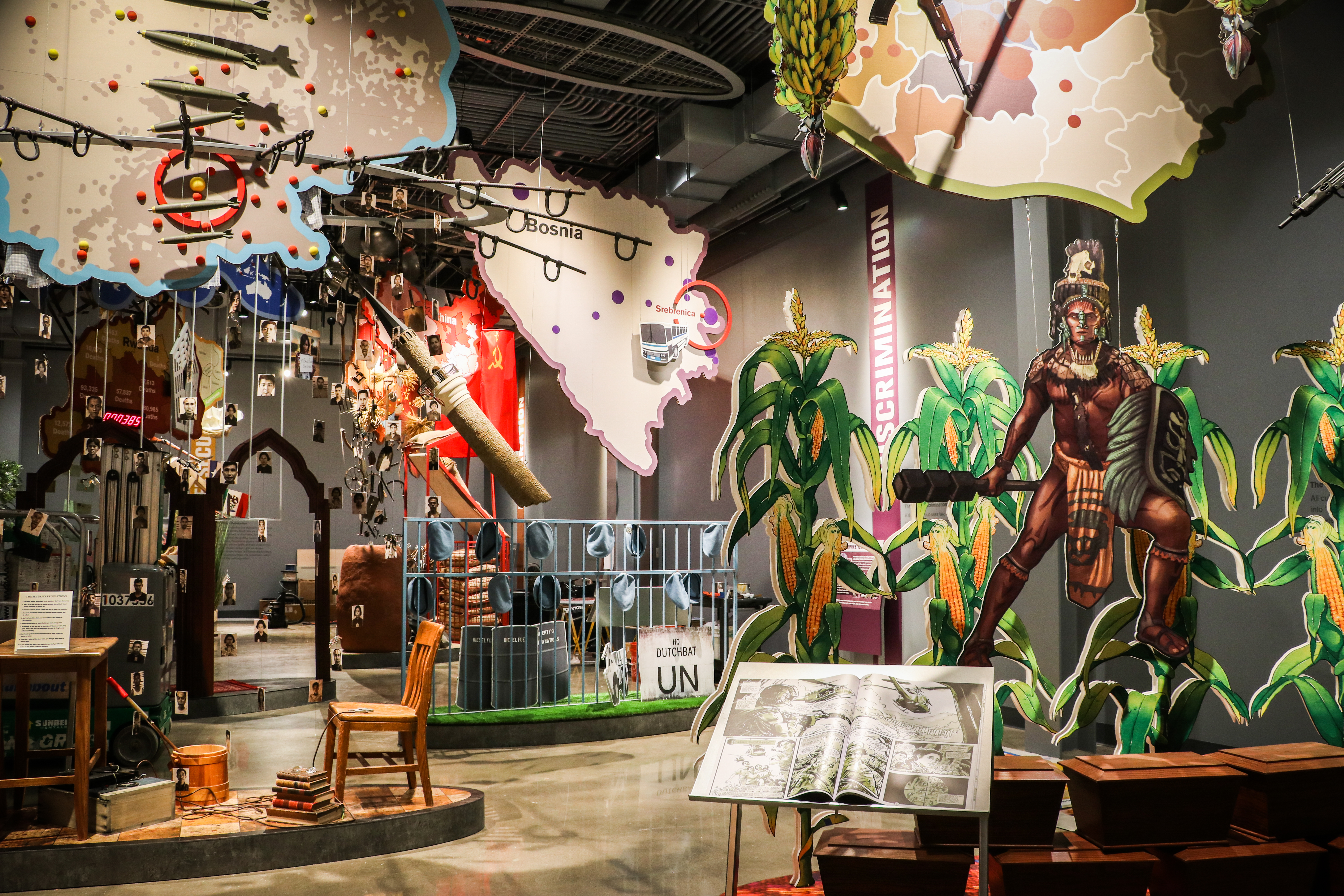 A photo of the Genocide Gallery, which reveals the stages that lead to mass killings.
Photo: Courtesy Dallas Holocaust and Human Rights Museum

Finally, the exhibition explores the worldwide movement for human rights and what we all can do to uphold them, from recognizing our own biases to standing up when we see injustice. 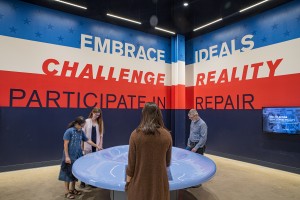 The end of the museum’s permanent exhibition features touch screens that let visitors find nonprofits they can volunteer with in hopes of creating a better and safer world.
Photo: Courtesy Dallas Holocaust and Human Rights Museum

“When people come, I hope that they’re inspired and that they do respond to the call to action, and that they become part of the solution,” Higgins says.

For years, the phrase “never forget” has rallied the Holocaust remembrance movement. The museum hopes that everyone who visits comes away thinking “never again.” 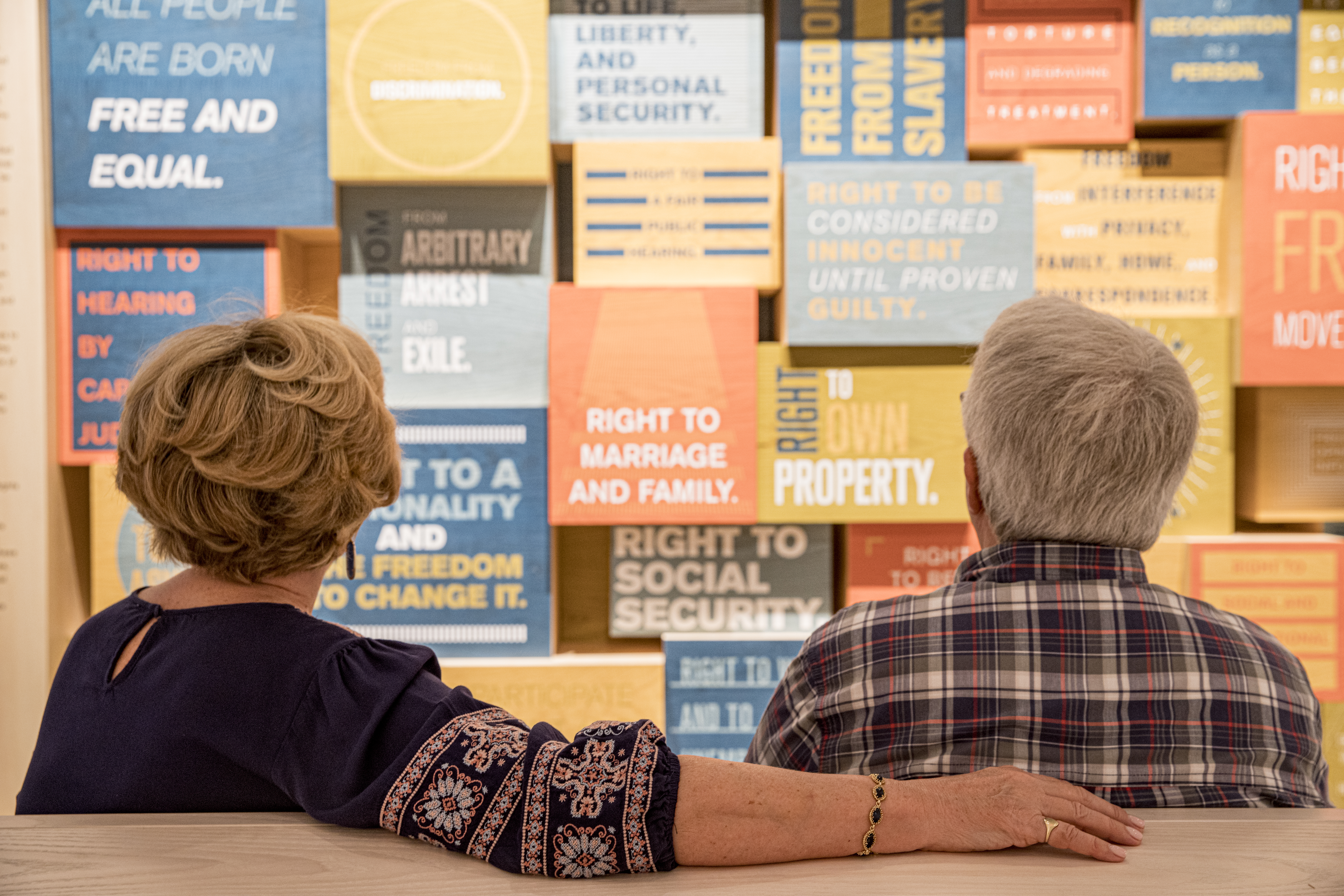