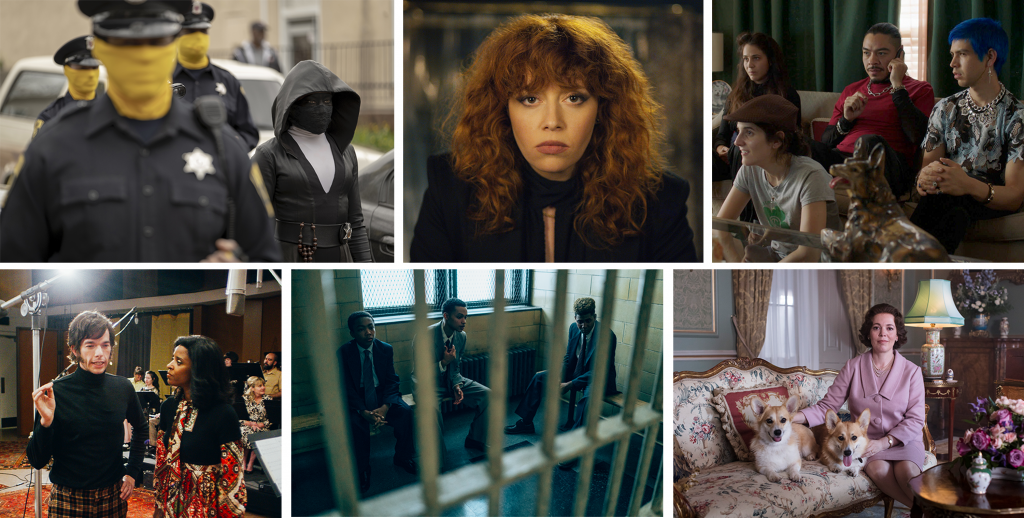 NPR’s TV critic and Pop Culture Happy Hour hosts pick 19 of their favorite television and streaming series of the year.

At a time when some modern politicians label any fact they dislike as fake news, there is no better moment for a miniseries dramatizing the collision between government propaganda and a massive nuclear disaster. Jared Harris is equal parts anxious impatience and weary fatalism as the real-life scientist who pushed the Soviet Union in 1986 to accept that an explosion at the Chernobyl Nuclear Power Plant was an international disaster caused by its own substandard design. Chillingly re-created with passionate performances — Stellan Skarsgard is a secret MVP as the Soviet apparatchik who slowly realizes the state is dead wrong — this miniseries shows the human cost where political convenience outweighs factual reality. — Eric Deggans

The cast is different, but everything else — the sumptuous production, the period details and the central gimmick (namely: the series’ insistence that whatever minor diplomatic faux pas du jour could feasibly doom the British Empire itself) — is veddy veddy much the same. Comfortingly so. Olivia Colman is marvelous as the doughty monarch who longs for a simpler life that’s less bound up in duty and public display. She and her fellow cast members manage to drive home the series’ theme that enormous privilege is in fact a burden — which, in 2019, is no mean feat. — Glen Weldon

Dead To Me (Netflix)

Christina Applegate and Linda Cardellini are both actresses who improve most of the projects in which they appear, and it was a joy to see them headline this dark comedy together. Applegate plays Jen, a young widow who goes to a grief support group and finds a new friend, Judy (Cardellini), whose intensity she finds both annoying and irresistible. Well-paced and consistently surprising, Dead To Me was one of the real sleepers of 2019. — Linda Holmes

The series headed into its third season with reduced roles for its two ostensible lead actors, Bill Hader and Fred Armisen. But it kept its focus: crafting loving homages to classic documentaries, rendered with laser-etched specificity. The key word: loving. The term mockumentary doesn’t apply here, as the tone isn’t biting or caustic. It’s tender, even intimate. Take the season’s standout, “Original Cast Album: Co-Op,” a hilariously precise riff on the 1970 D.A. Pennebaker doc, Original Cast Album: Company. There’s a moment when John Mulaney’s composer (not Stephen Sondheim but, c’mon, so clearly Stephen Sondheim) passive-aggressively — and erroneously — corrects a performer’s pronunciation of a lyric. It’s a tiny exchange so eerily perfect that it will fill a tiny subcohort of viewers with a unique species of delight: of feeling seen. And that, of course, is Documentary Now‘s stock in trade. — Glen Weldon 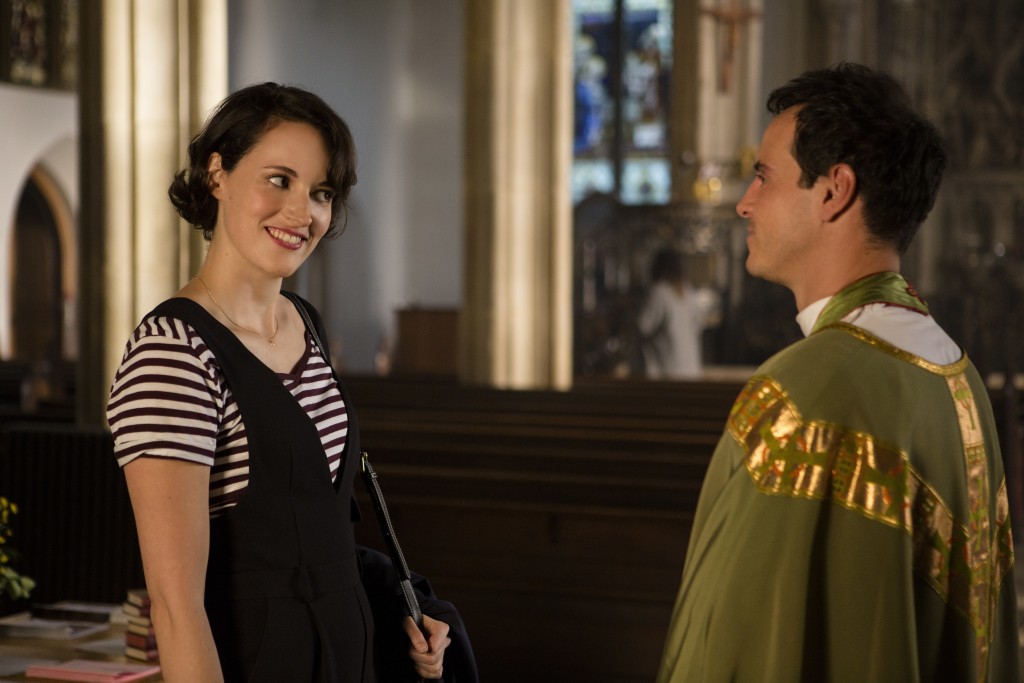 Yeah, yeah, everybody talks about Hot Priest. And Andrew Scott is certainly terrific as the off-limits love interest of Fleabag (played by creator Phoebe Waller-Bridge) in the series’ second and presumably final season, due in part to Scott’s chemistry with Waller-Bridge. But the show also made the very smart decision to establish him as an equal — someone who can match Waller-Bridge’s artisanal mix of toughness and vulnerability, and who can truly see her as we do. The series used him as a way to force Fleabag (both the character and the series) to absorb the lessons learned in Season 1’s shattering finale and move forward — and inward. — Glen Weldon

One of the weirdest and most proudly human comedies ever made, The Good Place has its ups and downs, and it struggles at times to keep its many moral and ethical quandaries from running away with it. But as the show closes out its final season, it has once again become one of the most engaging and thought-provoking shows on TV, anchored by a stellar ensemble led by Ted Danson and Kristen Bell. — Linda Holmes

Look: Los Espookys is weird. Blithely, blessedly so. It’s a comedy series about a group of friends who turn their love of horror movies into a not-so-thriving business providing elaborate but decidedly low-fi scares to a string of offbeat clients. It shouldn’t work: The humor is shaggy and abstruse, the tone is dreamlike, and the universe in which the show exists exudes a kind of matter-of-fact magic realism. But it’s that precise alchemical mixture — plus standout performances from co-creators Julio Torres and Ana Fabrega — that makes the show so funny and weirdly, wildly unpredictable. — Glen Weldon

The Other Two (Comedy Central)

The premise — a brother and sister (Drew Tarver and Heléne Yorke) struggling to make it in showbiz get blindsided by the sudden viral stardom of their much younger brother (Case Walker) — seems like a setup for broad pot-shots at Extremely Online culture. But The Other Two never forgets to be a show about a (very funny) family desperate to succeed, and it’s fueled by the easy chemistry between Tarver and Yorke. The jokes about viral fame, which are many, don’t feel as if they were written by a roomful of Gen Xers who need their kids to explain TikTok to them. No, they’re quick, sharp and precisely targeted, never more so than in the episode that features Drew throwing himself into the world of beautifully vapid Instagays. — Glen Weldon 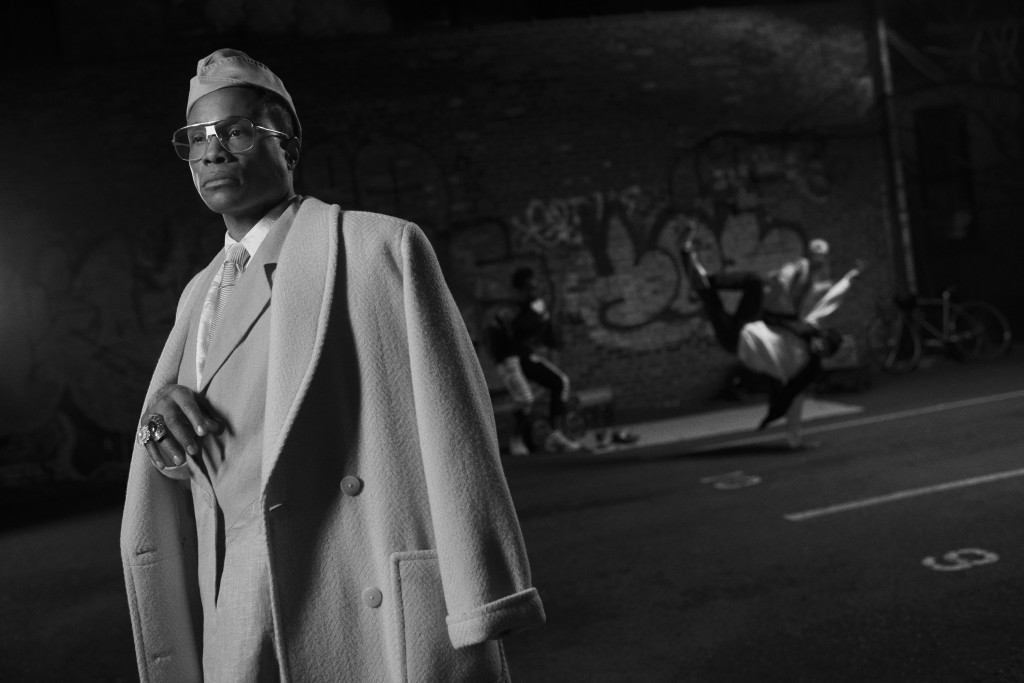 Billy Porter stars as Pray Tell in the series Pose.

Centered on the 1980s and ’90s AIDS crisis that took so many gay men’s lives, and the dance hits that brought ball culture into America’s mainstream, Pose gained focus and a potent mission in its second season this year. As always, Billy Porter shines as ball competition emcee Pray Tell; the most experienced actor in a sea of talented newcomers, he grounds every episode. And just as there is joy in watching Porter, a once-typecast actor, spread his wings, the whole season exudes that feeling: A show filled with transgender performers and producers has crafted stories about how love and friendship helped gay and transgender communities weather some of the most dangerous times in their lives. — Eric Deggans

The great Natasha Lyonne is at the center of this experimental, often funny, often very moving story about a woman who keeps returning over and over to the same moment at the same birthday party. Full of devastating observations about the loneliness of wishing someone else understood the strange circumstances of your life, Russian Doll succeeds as a comedy — but as several other things as well, including as a quintessential New York story. — Linda Holmes

By Season 5, most series start to lose some narrative momentum. But Schitt’s Creek didn’t let its characters and situations spin their wheels — it dug deeper. We saw that Moira (the great Catherine O’Hara) takes acting very seriously, even when starring in the schlockiest horror indie. We spent more, much-needed time with Emily Hampshire’s preternaturally sardonic Stevie. And most gratifying of all, Noah Reid’s Patrick finally grew into a full, rounded character with his own hang-ups — and secrets. — Glen Weldon

Liberally adapted from Lindy West’s memoir of the same name, Shrill stars Saturday Night Live‘s Aidy Bryant as a woman learning to live comfortably in her own skin. The rare comedy about a plus-size character that feels utterly devoid of pity for her, and shows her having loving friendships and a dating life that’s about as dysfunctional as anyone’s, Shrill marries Bryant’s sunny vibe and West’s marvelously sharp wit with great success. — Linda Holmes 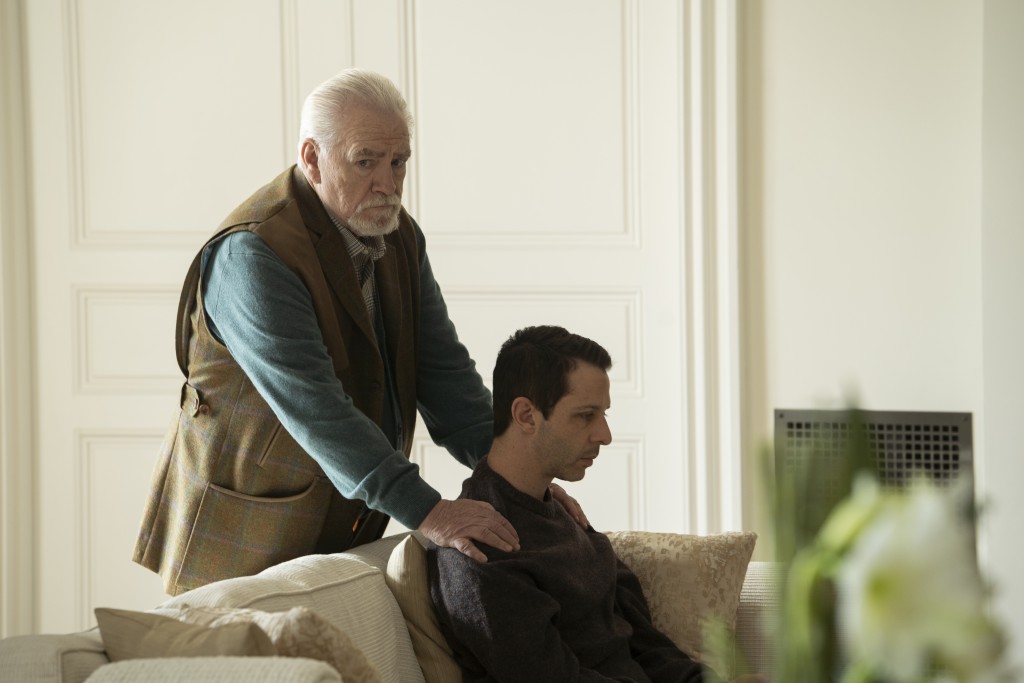 Succession is the rare show about despicable rich people that somehow gives them both humanity and wretchedness. The second season tracked the stifled misery of Kendall (Jeremy Strong), now more under the thumb of his father (Brian Cox) than ever. But the push and pull over the 10-episode run was devastating, funny, eminently quotable and brilliantly acted. The build to the final moments of the season balanced an air of inevitability with the tension of hoping something unexpected will happen, and by the end, it was immensely satisfying. — Linda Holmes

Executive producer dream hampton’s urgent docuseries achieves something horrific and necessary: It forces us to watch a long line of ex-girlfriends, former employees, journalists, music industry people and an ex-wife allege that R&B star R. Kelly has systematically groomed underage women for abusive sexual relationships over the past 25 years. As it unfolds, questions emerge: Why has the wider world ignored or downplayed these tales — some of which have circulated for many years? And why did it take a TV show packed with heartrending stories to force fans, critics and law enforcement to take a deeper look? Judging by its impact, which includes revived state and federal charges against a now-jailed Kelly, hampton’s work made a serious difference. — Eric Deggans

The abundance of great performances from the women in this Netflix limited series — Merritt Wever, Toni Collette, Kaitlyn Dever, Dale Dickey, Danielle MacDonald — would be enough to recommend it. But Unbelievable, based on the true story of a young woman who was persuaded by police to recant her account of rape only to have two detectives solve her case years later, is also enormously timely. As the detectives, Wever and Collette are completely different but perfectly in sync, and Dever’s work as survivor Marie Adler will stay with you for a long time. — Linda Holmes 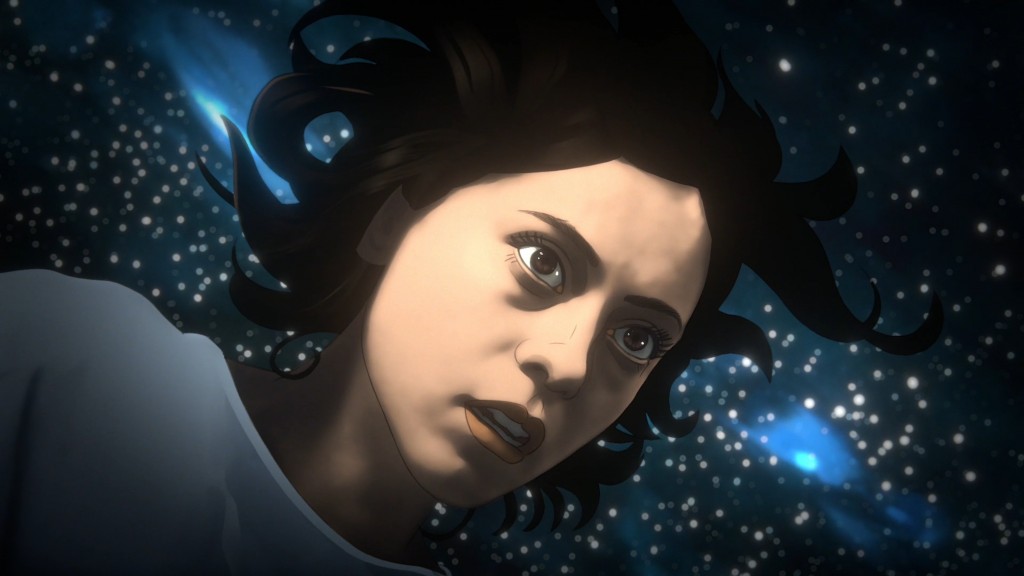 This series expertly rides a fine line between the physical and metaphysical while asking a potent question: Does a young woman’s conversation with her dead father indicate a hidden ability to bend time and space, or an advancing mental illness? The answer might seem obvious until you actually see the series, which uses rotoscopic animation to trace over scenes filmed with flesh-and-blood actors, blurring the boundaries between reality and something else. Rosa Salazar is funny and outrageously relatable as Alma Winograd-Diaz, a multiracial millennial searching for a purpose until her dead father, played by Bob Odenkirk, asks her to solve his murder. The answer she discovers at the end of the first season is as unsettling to the audience as it is for the show’s characters. — Eric Deggans

Creator Damon Lindelof has produced a masterpiece: the most ambitious, creative, eye-popping, genre-rewriting series of the year. It continues the story of the classic graphic novel Watchmen in a way that both subverts and revitalizes the modern superhero story. For those who find the genre too male-centered and white, Lindelof builds his story around a black woman’s family tree, starting from the 1921 Tulsa Race Massacre that destroyed a prosperous black community, and continuing as a passion for justice handed down through generations. Regina King is transcendent as Sister Knight, Tulsa’s best police officer, who wears a mask and costume at a time when white supremacists target police. And Lindelof creates new storytelling possibilities by reinventing two key characters as black men, somehow finding new possibilities from a comic book already considered one of the best deconstructions of the superhero mythos. — Eric Deggans

When They See Us (Netflix)

One of the best developments in media this year was seeing women and people of color gain the power to retell stories that were initially distorted by racism, sexism or some other -ism. No project embodied that spirit better than Ava DuVernay’s affecting limited series for Netflix, which dramatized the story of the Central Park Five — now known as the Exonerated Five. These were young, working-class, black and brown boys coerced into falsely confessing to the assault and rape of a jogger in 1989. You can quibble about how DuVernay dramatizes some events — prosecutor Linda Fairstein certainly has. But the scenes where talented, young actors such as Jharrel Jerome and Asante Blackk re-create confessions — statements that the viewer knows brought long prison terms in real life — are some of the most powerful moments in TV this year. — Eric Deggans