With school in the rearview, kids in North Texas are turning their brains off and enjoying their summer. But, this week, some students in the Dallas Independent School District returned to the classroom in hopes of becoming more proficient at one of their passions – music. We decided to visit Dallas Winds Band Camp to see what the kids were learning and to find out what they think about their future with music. 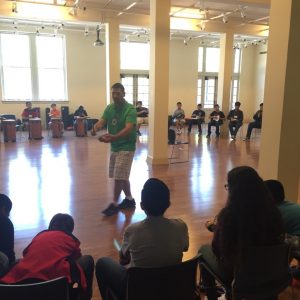 The students spend time warming up with a drum circle, even if that’s not their instrument.
Cred. Hady Mawajdeh

The day began with a tour of the camp, which is located at Booker T. Washington High School for the Performing and Visual Arts. My guide was Kim Campbell, the founder and executive director of the Dallas Winds – a symphonic band that’s been performing for the past three decades. The camp is one of the largest urban summer band camps in the country. And Campbell says that every summer the camp hosts around 600 middle and high school students from across the DISD so that students can have the chance to work with professionals to become better musicians. “You know, it’s one thing for a child to play the trumpet, but then to actually be in the room with a professional musician playing the same instrument that the child plays, that opens up their eyes. You can see the light go on. It’s like, “oh! That’s what I’m supposed to sound like,”” says Campbell.

Clarinetist Desiree Velasquez knows exactly what it’s like when that light turns on. The soon-to-be senior at Sunset High School has attended this camp for the past three years. Learning from the pros has helped her be a better musician and leader within her school band. She says that she’s taken what she’s learned at the Dallas Wind Band Camp and shared it with her peers. “I taught them at my school. So they became better clarinet [players] because of that. And now they’re here in honors band, so I’m pretty proud of them,” says Velasquez. 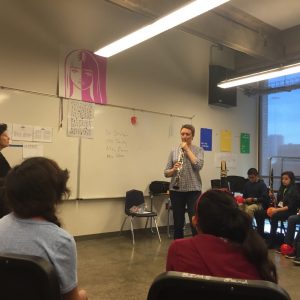 Instructors at the Dallas Winds Band Camp teach the students about things they’ll need to know to take things to the next level.
Cred. Hady Mawajdeh

John Shepherd is pretty proud too. Shepherd is the camp director and he’s the one who originally conceived this camp. Shepherd, a teacher at L.V. Stockard Middle School, loves hearing about students sharing what they’ve learned. He hopes it doesn’t stop after high school.

“We’re only ten years in, but one day my goal is to see one of these campers come back in 20 years and now they’re a professional musician and their playing in the Dallas Winds and so that’s really the full circle of music education,” says Shepherd.

Kim Campbell would also love for all of the students to become professional musicians. But, he thinks they’re getting something more important from this camp. “What we’re really doing is helping these children with some life skills that will make them better citizens,” says Campbell.

Hillcrest High School senior Alex Jett agrees. He says learning from the Dallas Winds and interacting with kids from other schools really puts him in an excellent position for working and playing with others. He says it helps him to play with any band and to play any music.

But how many of these kids really plan on playing music in the future? Other seniors weren’t positive they’d continue to play after high school. So, is classical music doomed to dribble away? Probably not Campbell says.

Classical music “is more alive than it’s ever been. Because of the internet there are more people listening to classical music worldwide than any time in world history,” he says.

You can put eighth grader Rita Salinas in that group. This is the second year that the confident young percussionist has attended this band camp. And she recognizes the merits of learning from classical music. Even still, her favorite music genres are rock and metal, which are known for their bombastic sound.

“[Rock bands] basically they just take what you learn [in band] but they add more energy into it and they change the style,” she says.

Though she was unsure about playing in a symphonic band like the Dallas Winds in the future, Rita says she plans to play in a rock band, “I see myself playing rock music in the future. I’m thinking about [adding] orchestra into the band. Like violins. A little guitar.”