Richard Sharum doesn’t see the kind of street photography community in the Dallas-Fort Worth area that exists in other large cities around the country — and he intends to fix that.

This August, he’ll host a five-day workshop with 12 photographers from around the city. Participants will go out and photograph on the streets for new or existing projects, then congregate to present and discuss their work.

Sharum says his role will be to offer advice on editing, sequencing and storytelling, but everyone in the class will offer feedback. 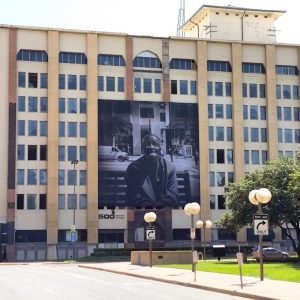 Sharum is a street photographer and the creator of “Observe Dallas 2015,” an exhibition of images of everyday people on the streets of Dallas, blown up and hung on buildings in the city. The tallest was 10 stories long. Art&Seek spoke to him about that exhibition last year. His goal with the project was to engender empathy in the community, which is also his hope for the class.

“I want to carry on the “Observe Dallas” idea of recognizing stories in the community and being empathetic,” he says. “There are hundreds of great stories out there that nobody is sharing.”

He is looking for students with experience in shooting — and, ideally, street work as well. He hopes photographers will be able to continue an existing project or initiate a new one and receive honest feedback from the whole class. Ultimately, he hopes their experience in the class will help foster a community of street photographers in the Dallas-Fort Worth area. 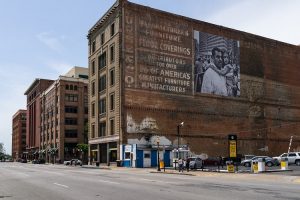 “There are a lot of creative people here, and they should be creating a revolution that gets national attention,” he says. “Hopefully this will be the first seed of a street photography scene, the first drop that causes a tide.”

After the workshop wraps up, Sharum says he’s headed to Cuba for the rice harvest to capture the agrarian lifestyle, before American-imported tools change it.

Photographers interested in attending the workshop should apply for free by sending a zip folder with 10 jpegs, max 1000 px on the longest side, to ObserveDallasWkshp@gmail.com by midnight, July 20. Include your last name in the file names. If accepted, there is a $150 fee per student.