If you’ve driven North on U.S 75 from downtown Dallas, then the chances are that you’ve seen a huge, beige, warehouse with loads of cars filling up the parking lot. 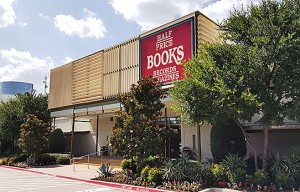 The entrance to the Half Price Books HQ in Dallas.
Photo: hpb.com

Well, that building is the headquarters for the largest, family-owned chain of new and used bookstores in the United States, the third-biggest of any chain: Half-Price Books. In this week’s Art&Seek Spotlight, we walk into the store and discover that one woman, an employee, is working to change how customers see books.

On a noisy Saturday afternoon inside of Half Price Books’ flagship store in Dallas, customer Priscilla Fitchit wanders around searching for the perfect book. Fitchit is a recent Dallasite – born in Fort Worth – and today’s her first-time visiting the place. And she’s taken aback when she sees what’s perched above the bookshelves. 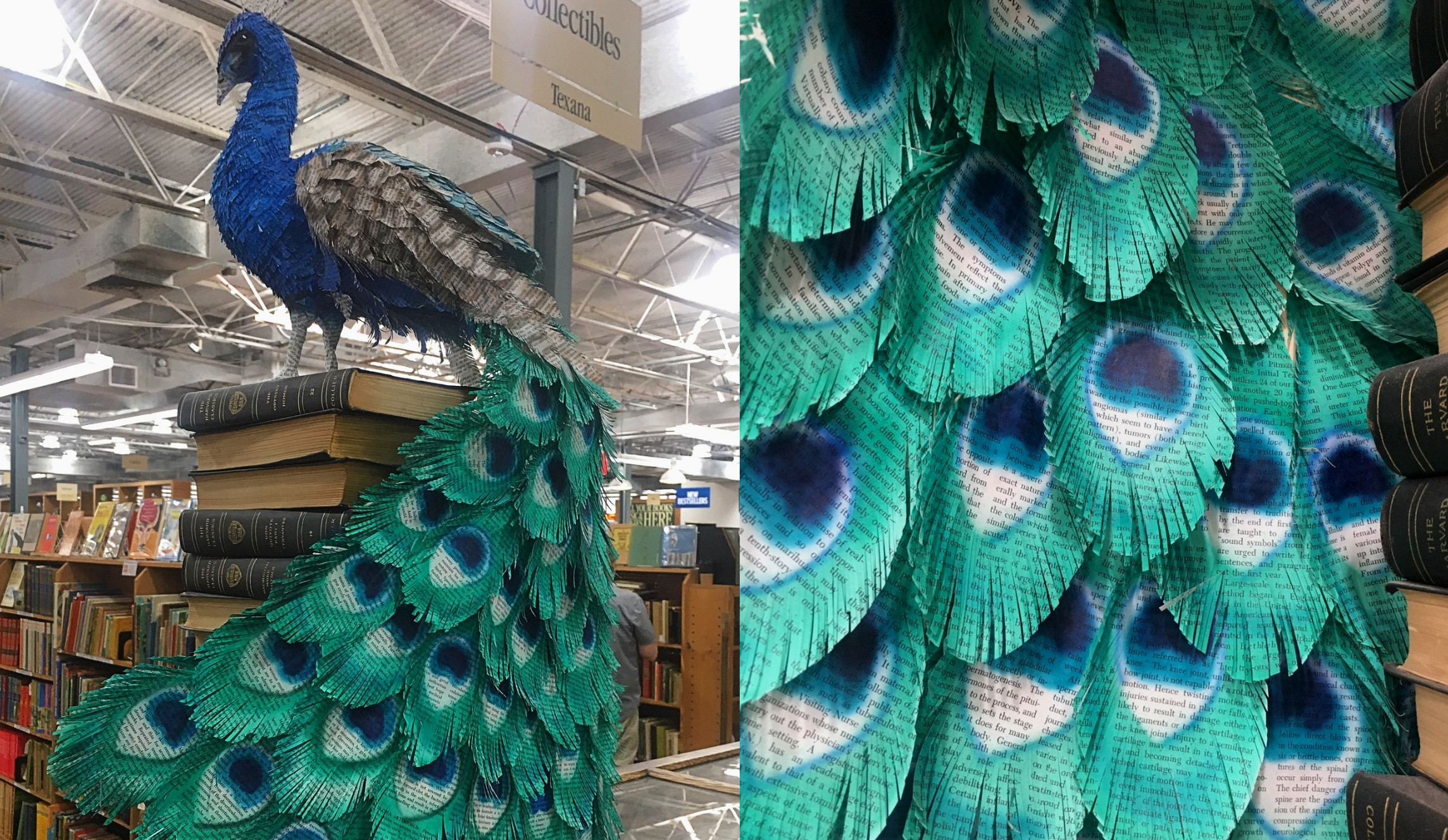 This peacock (and the detail of its tail) is what amazed customer Priscilla Fitchit. Photos: Jerome Weeks

“Amazing,” Fitchit exclaims as she looks at a stunning peacock. There’s also an elaborate paper carousel and a medieval knight. “And she did this. . . just I guess. . . Paper and glue. Paper and glue. Well, that is talented. I mean, I don’t know what else to say.”

Twenty years ago, when Half-Price Books took over the 55,000-square foot store, the place had all the ambiance of a Costco for books. Even now, there’s no carpeting and overhead, it’s mostly steel beams and factory lights. But if you stop searching the shelves and look up – as Stephen Orosco from Dallas did – you might see – the Grim Reaper.

Like some fairy tale character in a cave, the creator of these paper creatures is directly below us, underground. It’s Kiki Baughman (pronounced Bachman, like the lake) She works in the store’s basement – a vast, dim space filled with books and boxes, boxes and books. And on the day of our visit, the 54-year-old Baughman turned on her air brush compressor. She’s got a crowded work table in a sizable nook crowded with bins of supplies. With the air brush, she’s spray-painting craters – on a paper moon. The paper moon will be part of a larger display marking the 50th anniversary of the lunar landing.

“I’ll re-use a lot of things,” she explains. “Like this, we had an old display that was Pokeman balls, so this has now been turned into the moon. We’re just trying to recycle as much as possible.”

Baughman’s official title is Flagship Display Specialist, but her paper designs can be seen elsewhere – in Half-Price Bookstores around North Texas, Waco and Tyler. Her work’s been in a gallery, she’s built centerpieces for a literary wedding, she’s designed a dress.

When author David Sedaris came for a book-signing for his humor collection, ‘Calypso,’ Baughman made a stack of classic travel luggage – all out of book pages. Like most visiting authors who get such an artwork display publicizing their store appearance, Sedaris autographed the sculpture. Baughman built a small military helicopter for Brad Thor’s thriller ‘Use of Force. In fact, she’s built six displays for him, one for each time he’s visited. Thor, who’s sold more than 15 million books worldwide, may be Baughman’s biggest fan.

“Not anywhere on any of my tours across the country have I ever seen anything like that,” Thor exclaims. “And can you imagine what it would cost if my publisher tried to hire an artist in Dallas to do that, to draw attention to my books? I can’t imagine how many hours she puts into it.”

That’s because the peacock – with all its frilly feathers – required hundreds and hundreds of paper cuts. Baughman isn’t making papier-mache figures here: “Everything is hot-glued down,” she says. Which means she gets burned a lot: “I’m amazed I have any fingerprints left whatsoever. I could have a really good life of crime.”

Baughman’s background is in graphic design and packaging; she’s been creating store displays for Half-Price Books for 13 years. North Texans may still think of Half-Price as their funky, home-grown, used bookshop. But with 127 outlets in 17 states, it’s now the country’s third-largest bookstore chain. 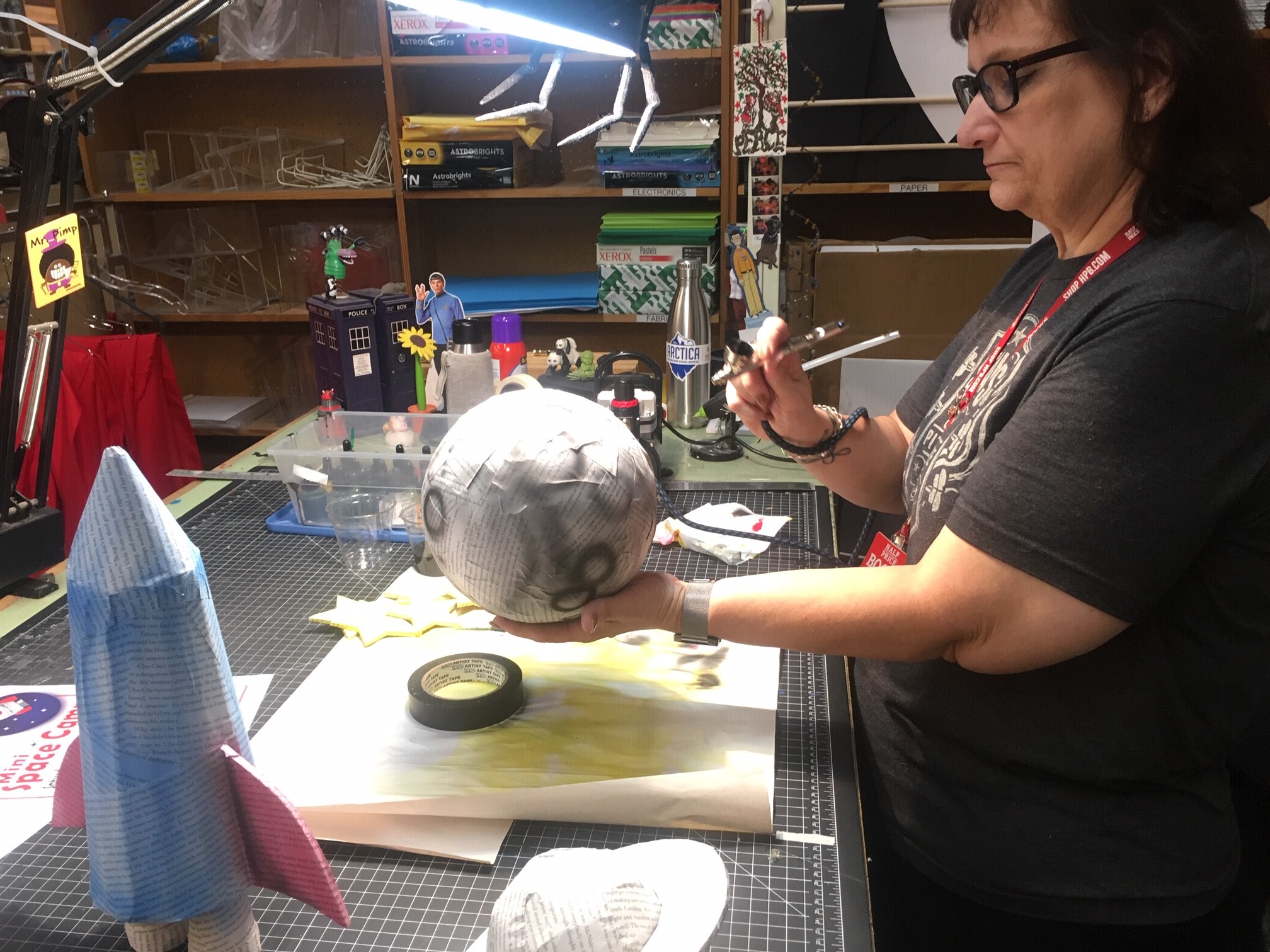 Kiki Baughman busily painting a paper moon – and a spaceship and stars – for a display commemorating the 50th anniversary of the lunar landing. Photo: Jerome Weeks

That’s one reason, six years ago, Baughman started crafting these elaborate paper structures. “One of the board of directors mentioned that we are too big of a company to be doing displays with construction paper and crayons. And I was like, ‘OK, let’s step up the game,.”

Baughman is a reader, her favorites are dark humorists like Christopher Moore, author of ‘Practical Demonkeeping.’ She’s also keen on recycling – she’ll use anything she can find in the store – but especially well-loved, worn-out books. She deliberately doesn’t use paint on her sculptures. She sprays them with water-based dyes. That’s so you can see these are book pages, you can even read the print.

Books are bought to be enjoyed, Baughman says. Bought to be read and re-read. And maybe sold and re-sold.

“And when they finally come to the end of their lifespan, that’s when I give them new life,” says Baughman. “One last time.”

They become carousels and teapots. Paper moons and robots.

In the center of Half-Price Books’ flagship store is a display case featuring four of Kiki Baughman’s creations: a burial vault for Anne Rice’s ‘Prince Lestat,’ a tree and a train for Harper Lee’s ‘Go Set a Watchman,’ another tree with a tire swing for Lee’s ‘To Kill a Mockingbird’ and a carousel for author Sarah Dessen. Photo: Jerome Weeks