It was a fleeting but powerful tribute to Floyd, who just five days earlier had been killed by police in Minneapolis.

“It’s almost like throwing doves in the sky when someone passes away, like a final resting piece,” Holmes said. “The sky is free land. We’re always fighting, arguing over what property is ours, but the sky is free.”

The memorial in the sky was a first for Dallas artist Jammie Holmes, but celebrating Black lives is central to his work.

Holmes is a painter. He grew up in Thibodaux, Louisiana, and his works offer glimpses into the lives of Black families in the Deep South. His paintings — intimate, poignant moments — blend portraiture with abstraction. Raw strokes of paint, symbols and text orbit his subjects. Yet, Floyd’s death and the protests that followed called for something different from him.

“The banners was good because if you was trying to hide away from the protests, while you’re on vacation or sitting at the beach or sitting on the lake in Dallas, you had to experience it regardless,” Holmes said. “It was still happening.”

And it keeps happening. This week, police in Kenosha, Wisconsin shot Jacob Blake several times in the back. Protesters quickly took to the streets.

Here in North Texas, demonstrations carry on. During a march in early August, activists walked through downtown Dallas after a pro-police caravan drove through the parking lot of Friendship West Baptist Church, a historically Black church in Oak Cliff.

“Black Lives Matter and that’s what we’re always going to fight for until there is there is equality, equity, complete and total recall of all these oppressive systems that oppress the Black community,” Swift said during the march. “We will not stop fighting. We will not stop protesting.”

The tenacity activists like Swift and others have shown in light of ongoing police violence leads Holmes to believe that we are at a turning point.

“I believe so and I hope so because I have two sons, and I need that to be fixed before they turn into Black men for sure,” he said. “I can’t leave them here in a world like this.” 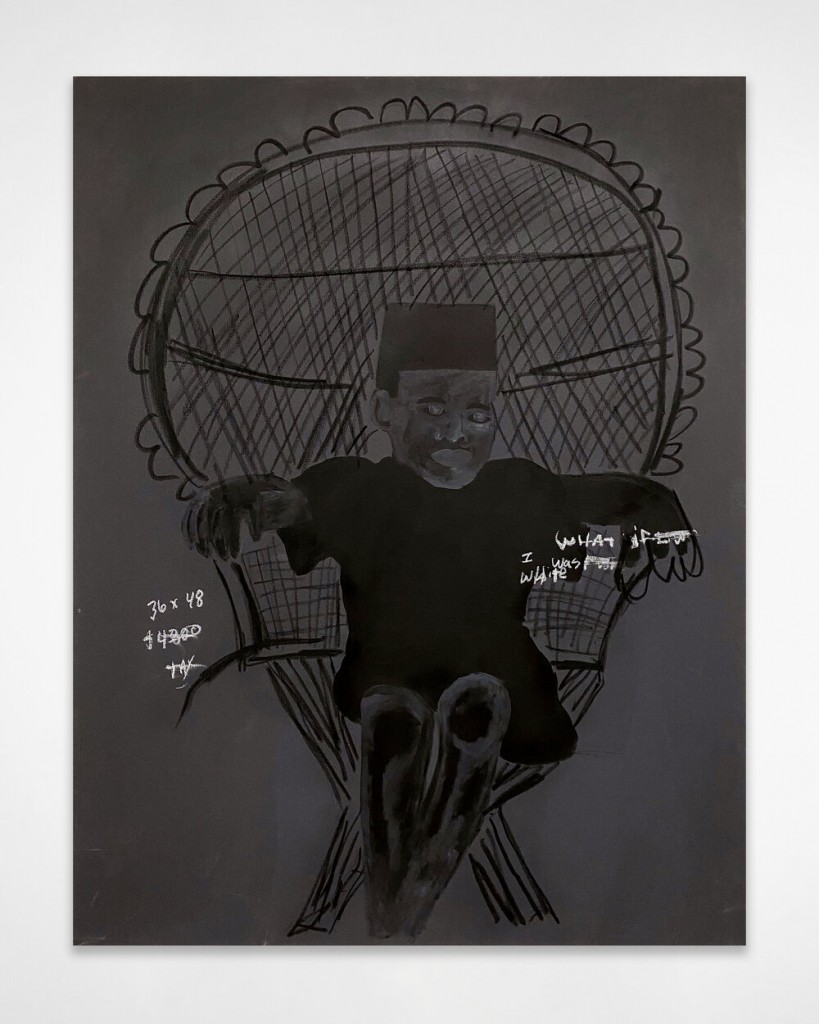 The world Holmes grew up in made him angry.

“As a kid, you don’t know what stress is, but as I got older, I was under a lot of anxiety, stress and depression,” he said. “It’s like you’re going back and you’re opening some old wounds.”

In a series of paintings called “growing up in darkness,” Holmes confronts the many ways society fails Black children. As a kid in Louisiana, he says the school system failed him. He didn’t get the same chances or treatment as white students. In one portrait, a boy — grey and somber — sits in a wicker chair. A message is scribbled to his right: “What if I was white?”

He says his paintings take a toll on him, but they ultimately give voice to his past and the community he grew up in.

“I endured hell and back,” he said. “But if I’m strong enough to actually keep fighting through it and keep making these changes, when the group behind us come up, they’re walking among a better society. I don’t want people to be so angry. I grew up angry. I don’t want that.” 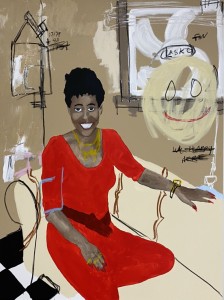 So, he counters the pain with moments of joy.

In one painting, his mother in a bright red dress sits on a cream-colored sofa with a beaming smile. In another, Holmes shaves his brother’s head —  pink flowers dancing behind them.

He believes his work, while deeply personal, can and should strive for something bigger.

“If you think this is about you, you’re out of mind,” he said. “Us artists, whatever we leave behind, helps change the way the world sees things. That’s what I’m looking for.”

His work picks apart the past, but Holmes clearly has his eye toward the future.