The Dallas Opera’s Hart Institute for Women Conductors is in its 4th year and it’s been getting attention, including from its next door neighbor, the Dallas Symphony Orchestra. The Symphony recently launched its own Women in Classical Music initiative. And that’s led some to wonder if it’s competing, cooperating, or maybe just tolerating its arts district neighbor.  For this week’s State of the Arts, KERA’s Bill Zeeble stopped by the Hart Institute and looked for answers.

You can click above to listen to his report, which aired on KERA FM. Or read it below:

Sonia Ben-Santamaria’s  arms are in the air, her eyes on the score, as she conducts two pianists. Teacher Carlo Montanaro sings and offers tips.

French-born Ben-Santamaria, is already a pro who wants to get better. She’s the first female conductor ever in the United Kingdom’s  Royal Opera House young artist’s program. She’s one of six women accepted into this year’s Hart Institute for Women Conductors. She calls the 2-week program a safe place for women to grow confidence in their own ability to conduct.

The Hart Institute for Women Conductors Concert is Saturday at 7:30 p.m. Details.

“This means a lot. We feel safe, we feel mentored, we feel supported.”

By safe, she means it’s a place where she can relax, let down her guard.

This institute first began in 2015 to help level an uneven opera field where men have dominated for centuries. There was even a time when male singers were castrated to perform female roles rather than allow women singers onstage. The Dallas Opera’s director of artistic administration, David Lomeli,  says the unique Hart Institute’s already had an impact. Some Hart graduates now hold leadership positions in opera companies around the world,as others are guest conducting. It’s also inspired other, though  shorter, female conducting programs, like the New York Conducting Institute.

“We are creating a change and a wave of change, that the more they are in the work force, the gender equality’s going to arrive, because they are suddenly being named decision makers too,” says Lomeli. 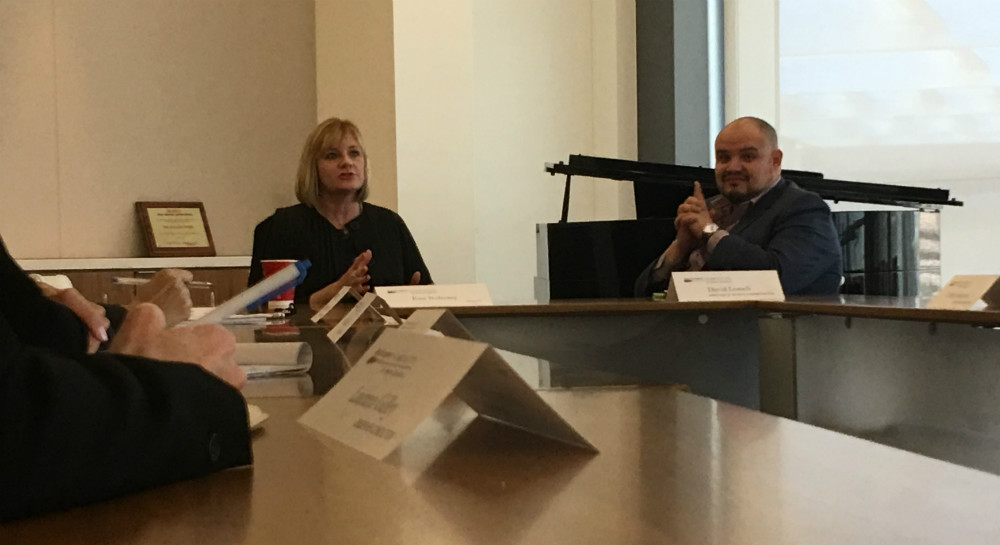 Next door at the Dallas Symphony Orchestra, Kim Noltemy is the newest decision maker.  Since January,  she’s been the Dallas Symphony Orchestra President and CEO. This year  she announced the DSO’s own 10-year women’s initiative. Half of all commissions will go to female composers. Principal guest conductors will continue to be women, on 2-year appointments. Pulitzer prize-winner Julia Wolfe’s been named the composer in residence. There’ll also be a Women in Classical Music symposium.  Noltemy says the Hart Institute helped influence it.

“I thought, well if we have the Hart Institute drawing all of these women, for this two-week period, then we thought it was very important to schedule it to overlap with the Hart Institute because why would you ever want to tell everyone, ‘Oh, come back in a month, or come back in two months,’ and, you know, so we can build on that,” says Noltemy.

The collaboration’s already being built. Noltemy joined the Institute’s 2-week faculty and addressed this year’s class of conductors about arts management. Lomeli quells any concern that the two women-based programs are competing with each other.

“I don’t really feel that it’s about competing,” he says. “What I love of this is that now Dallas is screaming that this issue exists and that we need to do something about it louder than any city in the world.”

Noltemy’s own research finds Dallas has long made noise about gender equity. She says five previous assistant DSO conductors have been women, which is unusual compared to other orchestras. She looked at Dallas Symphony personnel going back nearly half a century, and found 40% of DSO players have been women.

“And that’s highly unusual,” she says. “If you go back to the ’70s, at some of the larger orchestras you’re going to see that it’s many fewer. And so I thought wow that’s really interesting. So for many, many decades women have been very involved in the arts in Dallas and now we’re shining a light on it through these initiatives.”

And the public benefits. Most immediately, this year’s class of women opera conductors will show off their stuff Saturday when they lead the Dallas opera orchestra and singers in a public concert to end their intensive two week  education.