More than 8 million people have watched this video of composer Ludovico Einaudi playing piano in the arctic, as glaciers crumble around him. That collaboration with Greenpeace is just one of the works that will lure listeners to Fair Park Music Hall on Saturday night. I caught up with Enaudi from the studios of WNYC in New York for this week’s State of the Arts conversation.

You can click above to listen to the piece that aired on KERA FM. Or read excerpts of our chat below.

You’re the most streamed classical musical artist, you have topped the charts in the UK, yet classical music, in general, is perceived by many as in decline. Why do you think your music connects with so many people?

with the emotions of our time. Also, there is the fact that I dive into the world the world of music in a very wide range of possibilities. I was trained classically but I always love to be connected with popular music, with folk music. So, in a way, my music reflects this wide range of worlds. Everyone has a different connection with my music and I think this is very beautiful because also the fact it is instrumental music, it’s not closed into one meaning, but it’s open to different interpretations.

You’ve had very formal classical music training at a conservatory in Milan, and you’re a fan of rock and popular music. At this point in your life, which do you find more inspiring?

It depends. I mean, the world of classical music it’s so wide that I can keep discovering beautiful and incredible things for one life more. At the same time, there are worlds of music from around the world that I touch, like classical folk music from Africa, especially from Mali, and then many other cultures to discover I think. For example, Indian music—Indian classical music, it’s something that I would love to touch and to understand more in my life, but probably there’s not enough time—there’s not enough time in one life to do everything. 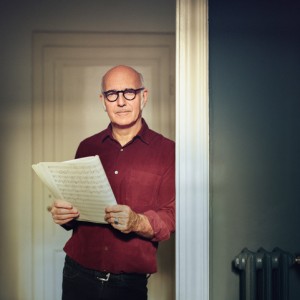 The video of you playing “Elegy for the Arctic” on the piano while floating out in the Arctic water has been viewed more than 8 million times. What was it like performing in that environment?

The environment was incredible because there was a wall—a mountain of ice around us. It was like a theater, a natural amphitheater, with no signs of life. There was a little seal, a young seal coming, popping out of the water once in a while. The ice is falling in the summer. It was falling down from the glacier into the water. Maybe you arrive and the water is clean, but after one hour the water full of ice.  So it is constantly something moving and changing. It’s very beautiful, actually, to be there. It was also quite dangerous in a way, because the mountain of ice falling down was creating big waves sometimes. But I was very excited to be there and I didn’t feel any risk.

Yes. There was only the group that was filming on another little boat that was following from the distance what I was doing. But I felt—there I felt alone.  It was like playing for the gods.