The first floor of the Crescent Hotel is an odd place for an immersive art show. But recently, gallerists Michael and Karen Bivins took over 12,000 square feet there. Enter through a door branded with the show’s title, “Psychedelic Robot”, and waiting inside is a space opera, 12,000 square feet, a celestial burst of colorful installations created by both international and Dallas-based artists.

Dallas graffiti artists Isaac Davis (IZK) and Michael McPheeters created an immersive mural that greets you with swirls of blues, green and yellow. A veteran of the Dallas arts and music scenes,  Davis represents exactly the kind of savvy, talented creative involved with this exhibition.

“”Psychedelic Robot” is a refreshing multi-sensory art experience in the soul of Uptown,” Davis says. “I think I just stepped into a Hunter S. Thompson hallucination.” 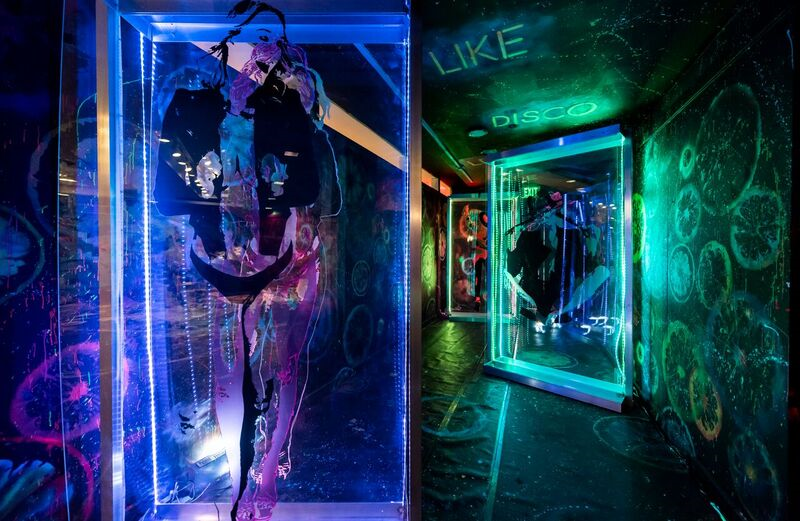 “Psychedelic Robot” has been extended to November 15. Details.

This show is one example of the couple’s ability to predict trends in the art world over the last 30 years. It started during their time as art consultants in L.A. For two years, Bivins Gallery has also been in Crescent Court, across from the entrance to the premier Dallas hotel, where the pop-up show is located.

“We wanted to look around for the best location. We didn’t want to be on Dragon or Levee,” says Karen Bivins. “We wanted to think about our curriculum and roster. Some of our clients were big time people. We wanted to come to their area. We always thought the Crescent was off limits because of the price.”

For “Psychedelic Robot” the Bivins turned rooms over artists they represent, like Punk Me Tender and Frederic Avella, to do what they would with them. Proceeds benefit Klyde Warren Park.

“Psychedlic Robot” is in a similar vein to immersive experiences like the Sweet Tooth Hotel in Dallas, or Meow Wolf, the Santa Fe art collective that turned a bowling alley into a semi-permanent interactive exhibit. The Bivins brought together accessible artists and teams, including the immersive paper installations of The Color Condition, the geometric madness of Laura Moore, and trippy, graffiti abstractions of Travis McCann.  The experience provides a temporary artistic alternative to the discord and distractions of the real world.

“This is needed, especially in the world we live in right now,” says Karen Bivins. “People are going into solitude, kids are on their computers and never interacting. It’s a wall of solitude. This is about people getting together again.” 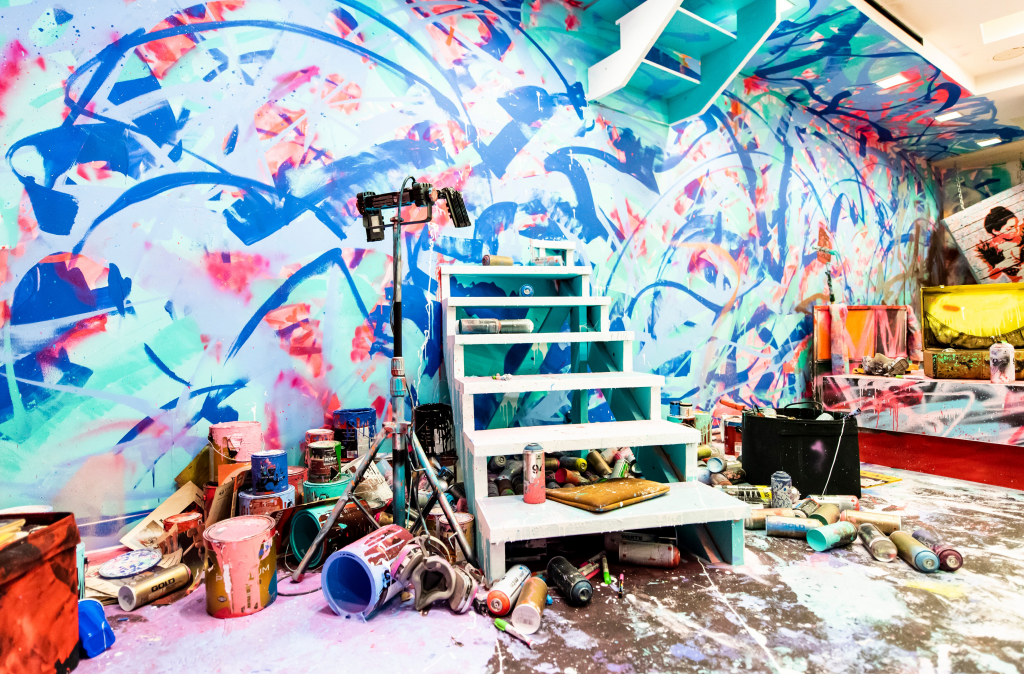 Installation by not.travis – a replica of his Dallas studio – at “Psychedelic Robot.” Photo: Bivins Gallery.

Across the way, Bivins Gallery boasts an international roster of artists from various disciplines, including Mr. Brainwash, a central player in Exit Through The Gift Shop, the 2010 documentary on anonymous street artist, Banksy.  The Gallery works on three levels: first it represents artists from around the globe in the primary market. The couple also works with international clients to find artworks, such as Picassos and Monets, for clients’ personal collections. And the Bivins represent young, emerging artists, and provides them with outlets, such as “Psychedelic Robot.”

“The truth is, most gallerists are going to represent artists they like,” says Michael Bivins. “You are always going to get that slant on what kind of roster you put together. We put together a roster of people we like. Karen and I are constantly scouting the world for what we think are undervalued blue chip artists. What we mean are artists who are in all the museums, phenomenal exhibition history, yet their price points are still in the realm of reality.”

The couple launched other careers – he in finance, she a lawyer. Their initial foray into the art world was as consultants, buying and selling multi-million dollar works to collectors in the Bay Area. They started advising on art purchases for friends, eventually working with corporations on serious art acquisitions. 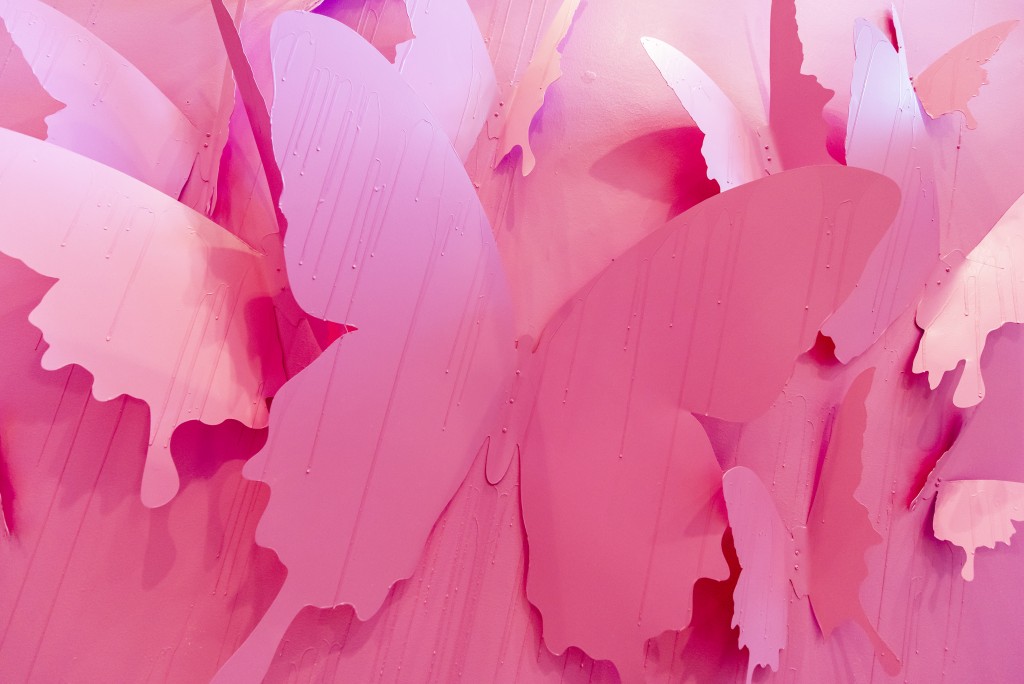 “We were enamored with the artists from Northern California from the early ’60s, we like that style of artwork. Now they (critics) make fun of the New York artists who take themselves so seriously. A lot of the museums are now looking for a lot of things we were looking for.”

When it comes to the couple’s working relationship, Michael says, “We’re pretty similar on what we like. We love color. It’s a big thing to us. We both choose the artists on our roster and manage our clients equally. I take care of marketing and sales. Karen takes care of handling the artists, contracting artists, back office and logistics.”

The Bivins returned to Dallas, Karen’s hometown, five years ago. “We felt like the collector community was here, so we decided to open a gallery,” says Karen.

Looking for a location that separated them from the rest of the art scene, they embraced Uptown, an area that lost its biggest art venue, McKinney Avenue Contemporary, to the Cedars neighborhood in 2015. 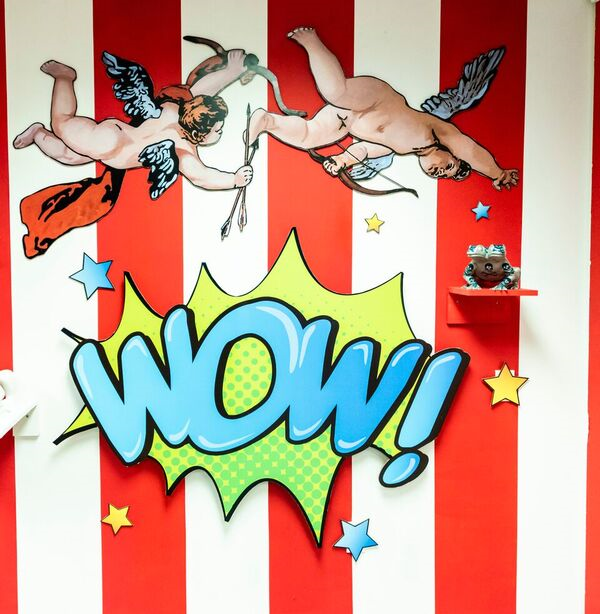 Karen wants everybody, especially young people to feel at home when they visit an exhibition at Bivins Gallery.

“There’s no pretense here and no such thing as a dumb question. We’re a ‘bring your dog and come in and have a beer’ gallery. We handle the most seasoned collector to the person buying their first piece. We have 35 artists we represent in a primary market, and in the secondary market – if someone is looking to acquire a Picasso, we can help them. If they want to sell one we can help them too.”

“Psychedelic Robot” falls in line with that philosophy.

“This is about democratizing the artworld,” Karen said. “We wanna create art for young people. What’s happening now is this experimental emerging in the art world. They’re popping up and they are very successful. You have to have art. You gotta have it for your soul.”