Skip Navigation
Home > ArtandSeek.net > Quinceañeras Strut Through The Garden And Celebrate, Despite The Pandemic

On a cloudy afternoon in early September, 15-year-old Yailyn Gomez twirled in her grandmother’s garden wearing her navy blue quinceañera dress and dreaming of the princess moment she’s wanted since she was a little girl.

“This is my dress. It’s sparkly. It’s big and poofy. And there’s a lot of sequins,” Gomez said as she touched the sparkly beads stitched onto her garment.

Before this moment, Gomez’s quinceañera dress had been hanging in her closet waiting for a celebration that never happened.

“That’s all you really picture when you’re little,” she said. “You are just waiting for your quince, with your big poofy dress, your friends and family and just the lights on you.” 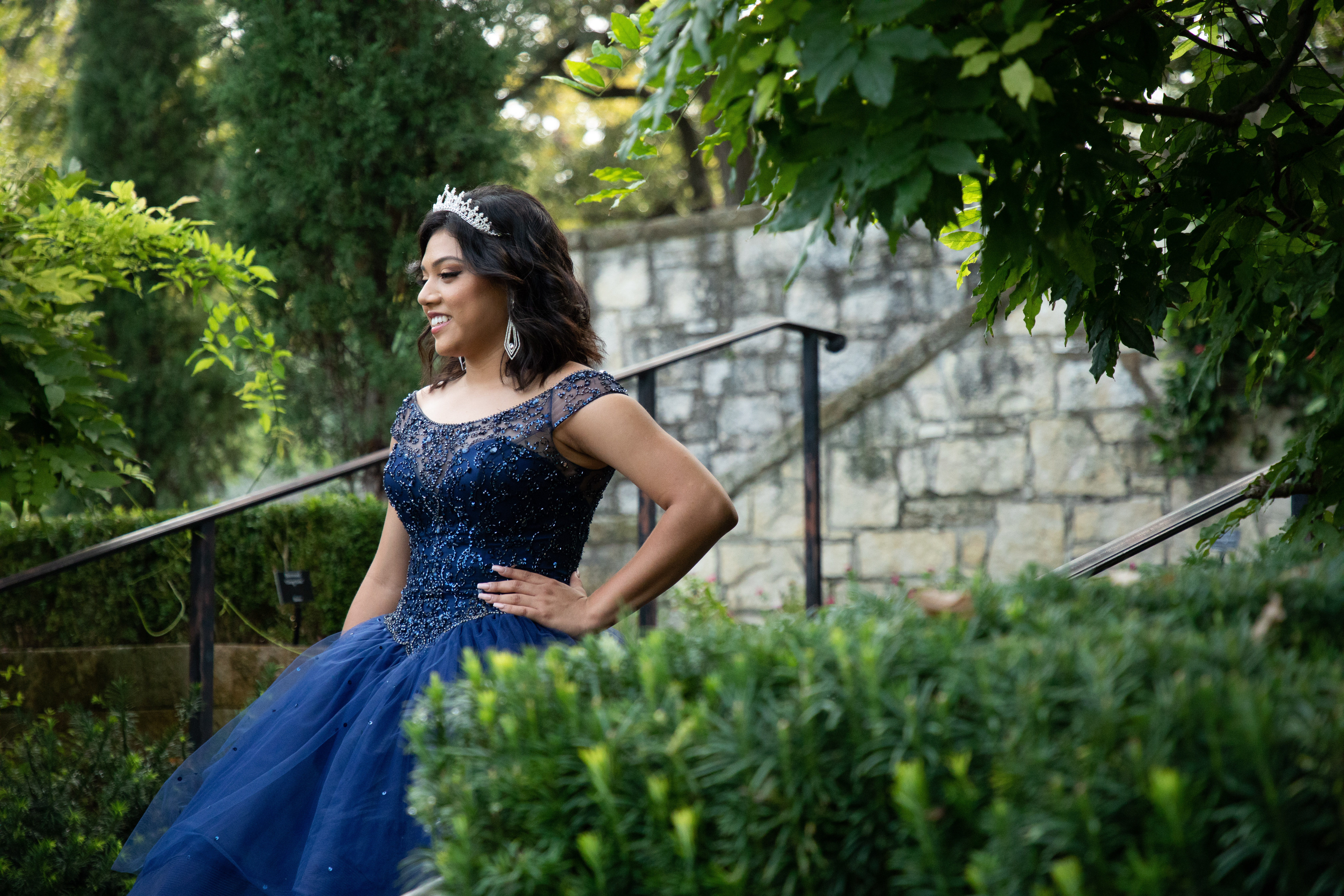 Yailyn Gomez, 15, poses for a photo at the Dallas Arboretum, in her Quinceañera dress. Photo: Keren Carrión/KERA News

Gomez, who goes by Yaya, is a sophomore at Lakeview Centennial High School in Garland. Her family and friends describe her as shy and driven. She loves to play classical piano music and has recently joined her high school’s drill team. Yaya is the oldest sibling of two. In May, her 15th birthday party was cancelled due to the pandemic.

“As a Mexican American girl you hear the stories of your mom and your tias having their quince and you’re just so excited,” Yaya said.

A Quinceañera isn’t just any birthday. In Latino culture, the day a girl turns 15 is a coming-of-age ritual. The tradition includes a dance with dad, a change of shoes from flats to high heels, and la ultima muñeca or one last toy doll — all of which are symbols of leaving childhood behind. In some cultures the celebration is deeply rooted in religion and some girls hold a mass before the pachanga or party.

Yaya’s mother found the dress on Facebook for an affordable price. Quince dresses can be as expensive as wedding dresses.

In places with huge Mexican American populations like Dallas, quinceañeras are part of the cultural lifeblood of the city. The tradition has been in Yaya’s family for generations. Her family’s from San Luis Potosi, Mexico. In her grandmother’s home, the hallway is lined with framed quince photos.

“As you can see this is my mom in her quinceañera dress and her crown. And this is my tia… and her sister and she is also in her dress…” Yaya said as she walked the hallway.

How The Pandemic Impacted Quince Plans

The family hoped to reschedule the party. Then in July, Yaya’s dad got sick with COVID-19.

Gomez, who works in construction, was sick for three weeks. He experienced intense fever and loss of appetite. His family thought he wasn’t going to make it. 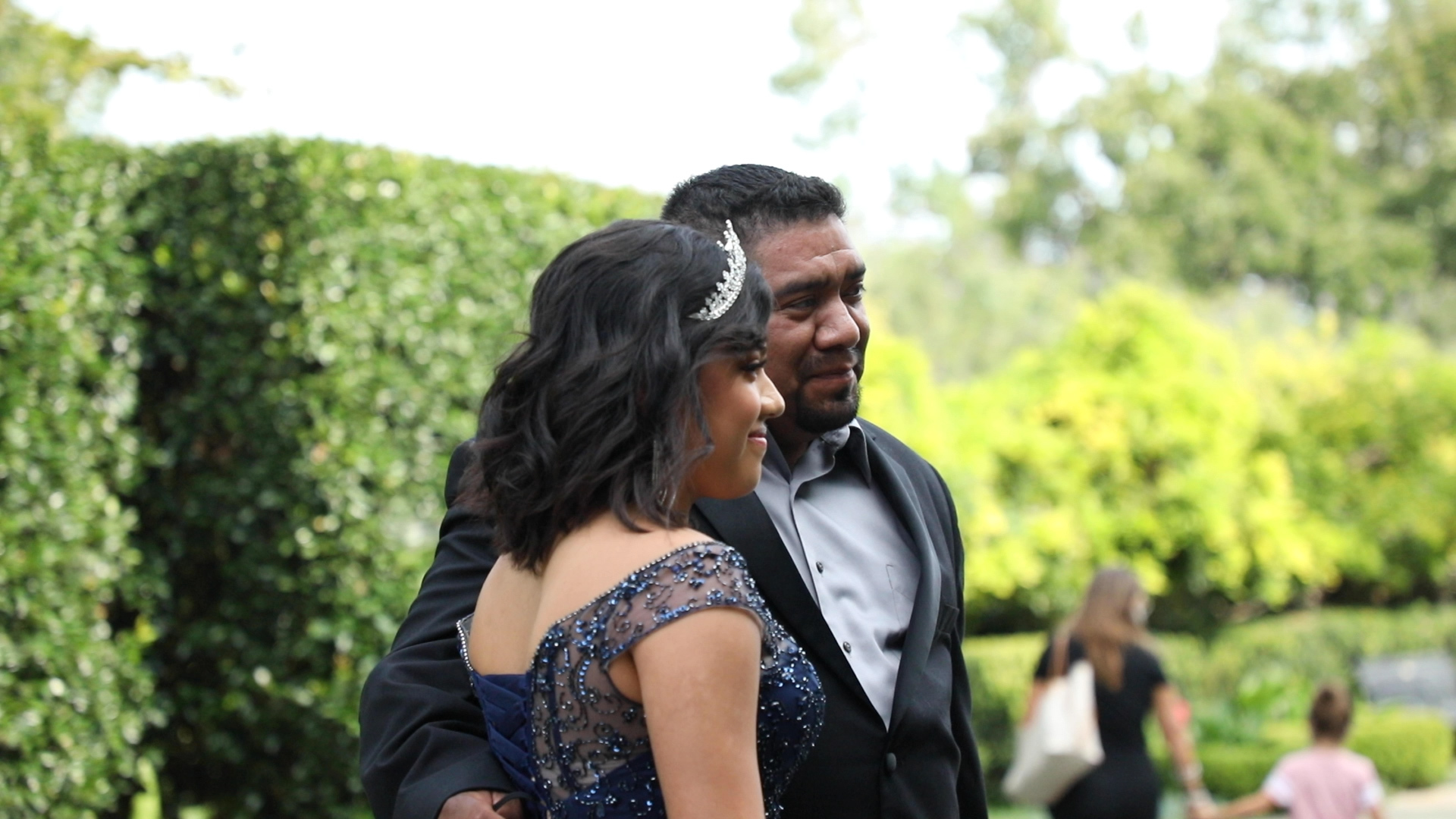 Hispanics make up 41% of the population in Dallas County, but comprise 57% of positive COVID-19 cases, according to data from public health officials in July. One of the biggest reasons is because a lot of Latinos aren’t able to stay at home as much as other groups, and they also make up a huge chunk of the city’s essential workforce.

“My dad got sick and it was just really sad. All I kept thinking about was the quince father-daughter dance. It is very important to me and I almost didn’t have it,” Yaya said.

But despite all of this, Yaya’s parents were still determined to make the quince happen.

Yaya’s parents encouraged her to sign up for the Quinceañera Show at the Dallas Arboretum on Sept. 12.  tThe 3-year-old event kicks off Hispanic Heritage Month, which officially begins Sept. 15 and goes to Oct. 15.

On the day of the show, traditional waltz music played as 39 girls, many, who like Yaya, weren’t able to have their own quince, paraded around the gardens. Their elaborate dresses of pink, blue and purple looked like flowers against the backsplash of the lawn.

“We see quinceañeras here at the garden everyday, so it feels like a part of our landscape that these young ladies are here,” said Marcela Rojas, Public events manager at the Dallas Arboretum.

Rojas is from Mexico, and this event stirred memories of her own quinceanera.

“To me it’s really personal,” Rojas said. “It’s because it connects me to my culture. And to me, this is the day our garden looks most beautiful.”

In the main garden, families sat in white chairs in front of a stage and the girls were called out one-by-one, as the host read each of their statements about why this moment was so meaningful. 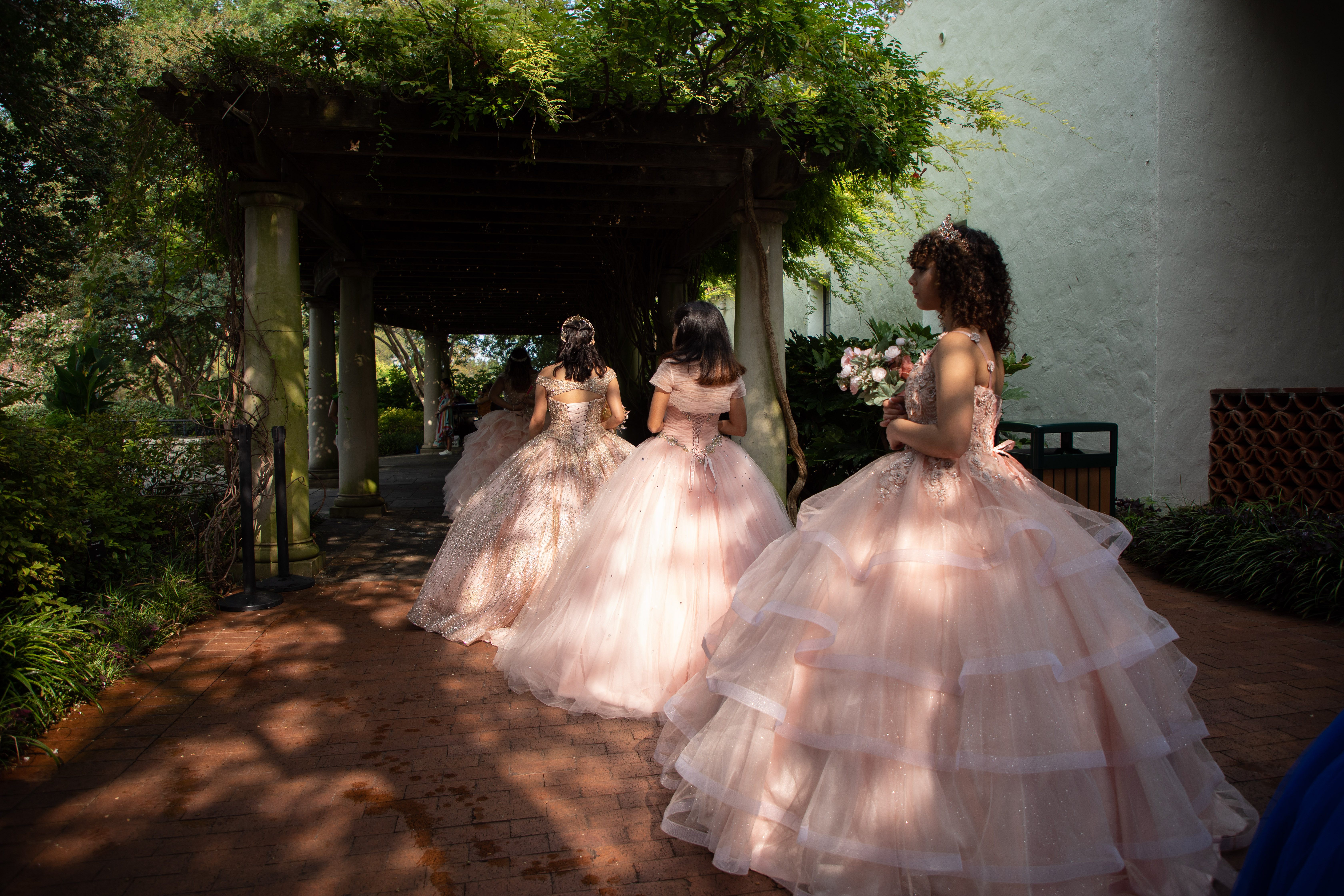 A group of young women at the Quinceañera Show at the Dallas Arboretum on Sept. 12. Even before the pandemic, it was common for girls in Dallas to take photos in their Quince dresses at the site. Photo: Keren Carrión/KERA News

“Yailyn Gomez,” the host read. “Yailyn says her heritage provides me a sense of unity and belonging to a group. Every time her family comes together to celebrate they take the time to talk to her about past generations and the story of where we came from…”

When Yaya walked down the stairs from the gazebo that event was using as a stage, her parents were overwhelmed. Tears flowed down her dad’s face.

Despite the obstacles, Yaya was able to realize her dreams of marking her special day, upholding a family tradition and taking the first steps to adulthood.