The teen theater company, Cry Havoc, has been developing a play about gun violence called “Babel.” More than that, they’ve built a set for their play as a public art installation anyone can see – without the show.  The room-sized artwork uses video projections – plus lots and lots of shoes.

At Hamon Hall in the Winspear Opera House, volunteers sort through huge piles of donated shoes on the floor. Some 7000 shoes.

‘Babel: A Play About Guns,’ presented by Cry Havoc Theater at Hamon Hall in the Winspear Opera House through July 15. You can follow our entire coverage of Cry Havoc’s lengthy development of ‘Babel’ – including an interrupted visit to the NRA convention in Dallas here.

Gun violence, he adds, “touches us all.”

McGeehon is the production designer of ‘Babel.’ And he’s busy directing a small army of Cry Havoc actors and volunteers as they empty laundry hamper after laundry hamper, plastic box after box, all of them filled with shoes. 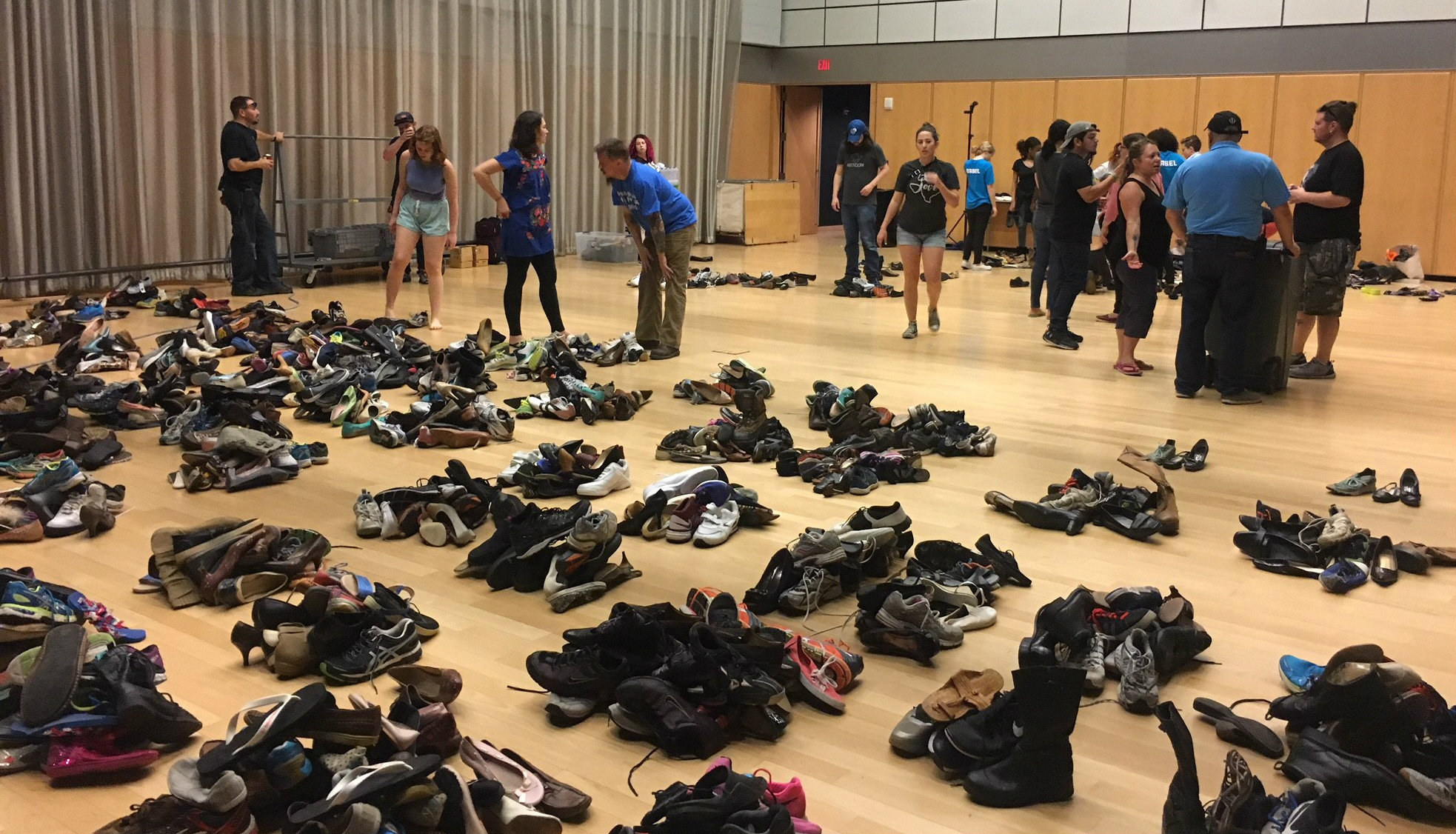 Sorting the shoes on the first day. Photos: Jerome Weeks

McGeehon: “We will hang the number of shoes of people that have been touched by gun violence in America to that given day.”

Each shoe represents another victim of gun violence. On average over the past several years, 12,000 Americans were killed by guns. McGeehon calculated by early July this year, there’d be somewhere between 7000 to 8000 gun deaths. In fact, “the show itself runs for about three weeks,” he says. “We will add shoes daily to show how many people were affected that particular day.”

McGeehon is the guy who had to figure out how all of this would work: how to store the donated shoes as they came in from AT&T Performing Arts Center staff, One Arts Plaza and other sources (he used rolling laundry hampers – and the shoes were individually deodorized), how these piles of shoes would end up dangling down Hamon Hall’s four walls. He had to calculate how many total pounds the shoes might weigh, how they might be safely hooked together in strands that wouldn’t break (100-lb. zip ties and a safety cable) and whether the lighting grid could lift all the necessary spotlights for the show itself plus the 226 strands of shoes, lift them all 21 feet into the air.

OK. So why shoes? 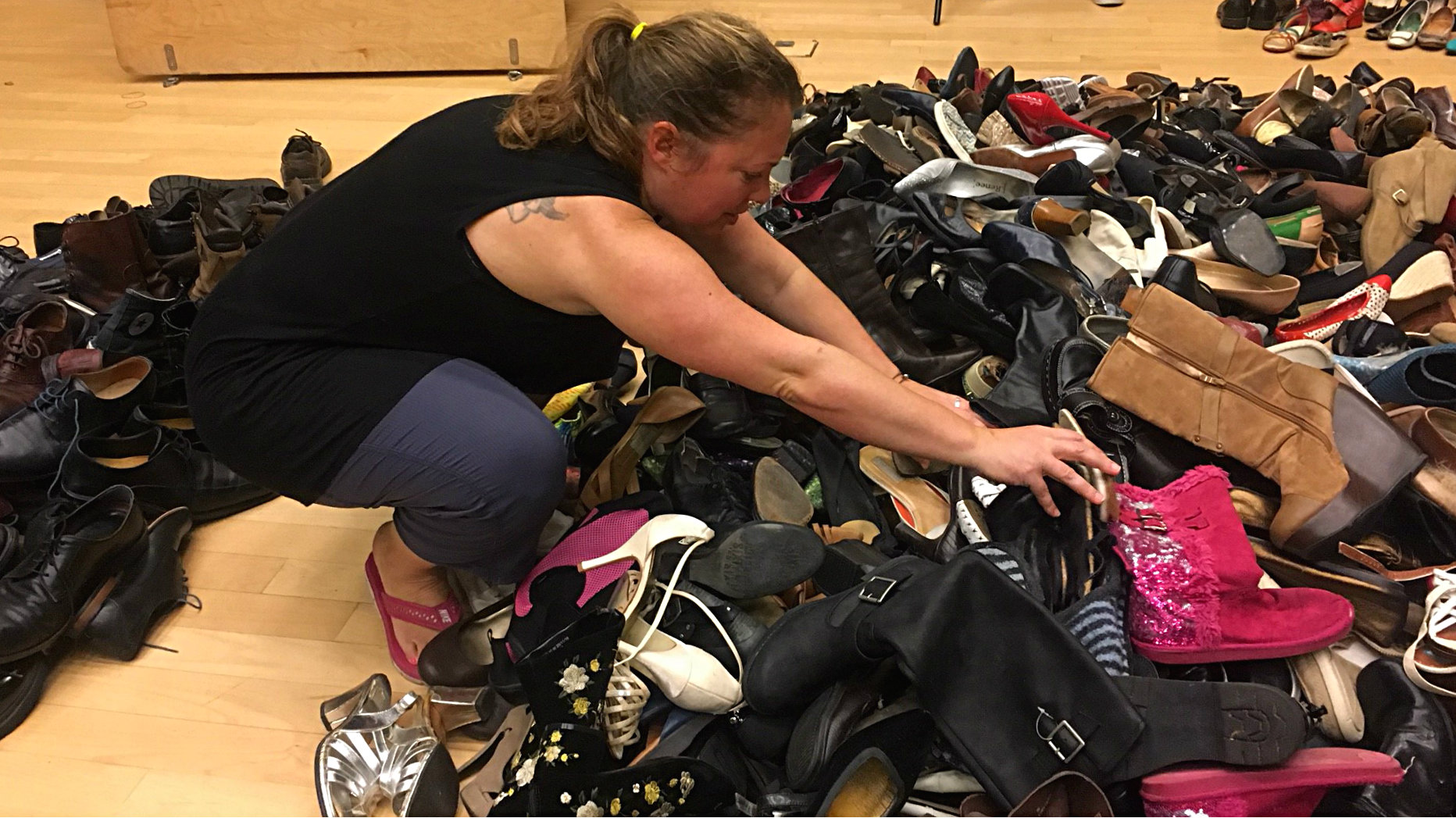 Cry Havoc’s executive director Mara Richards Bim digs through shoes for ones to use for characters in the play, ‘Babel.’

Partly, it was Hamon Hall. It’s the Winspear’s smaller venue, but it’s still a tall, handsome room with a shining wood floor.

“Hamon Hall has shimmery, sparkling curtains,” says Mara Richards Bim, executive director of Cry Havoc. “And you know, it’s a beautiful space. And I was trying to wrap my head around how we would do a show that I knew would be so – painful?”

‘Babel’ contains interviews with parents whose children were shot to death, interviews with politicians waffling around gun rights vs. gun control. But Richards Bim also had to wrap her head around how to make the sheer numbers of gun deaths in America meaningful to visitors. For instance, the numbers of gun deaths typically listed may list only homicides or homicides plus accidents. They do not include suicides. Yet suicides by guns represent two-thirds of all gun-related deaths in the country. It’s the second leading cause of death for males from adolescence to 24. In 2016, a total of 38,000 people were shot to death – by themselves, by accident, by a murderer.

“When numbers get really big,” Richards Bim says, “people don’t identify with them. You know, how do you quantify thousands of people lost to guns?”

Eventually Richards Bim recalled the famous room of shoes at the United States Holocaust Memorial Museum in Washington D. C. They were all confiscated from Jewish prisoners at a single Nazi concentration camp. 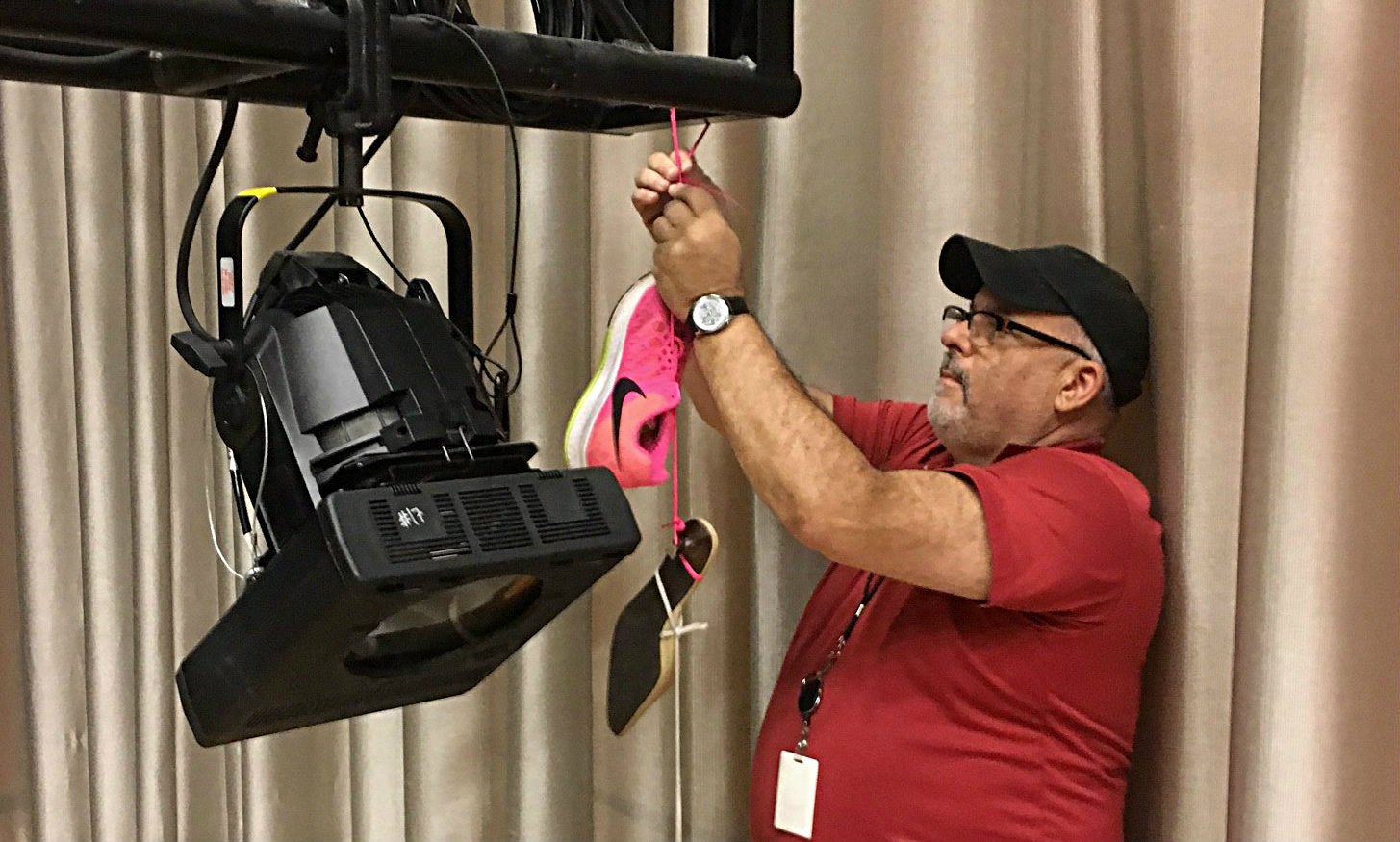 When she told McGeehon her idea for a curtain of shoes, he immediately started considering the technical challenges. “Then I started thinking about it from a philosophical point of view,” he says. “And I just sort of teared up. … In the world of gun violence, people are running away from it.”

Hence, the shoes. They made artistic sense, emotional sense. And McGeehon could make the idea work.

“I called ATTPAC the next day,” Richards Bim exclaims, “and was like, ‘I have this really, really crazy idea, and you’re going to say no.’ And they didn’t!”

Actually, administrators at the AT&T Performing Arts Center liked the idea so much, they wanted to make it more than a set design with video projections. It should be its own artwork.

“So it’s two separate events,” McGeehon explains, “both funded by the Center and the Office of Cultural Affairs. There is the art installation which will be open from 9 to 5 every single day that people can come in and see, and there’s the performances of ‘Babel.’ ” 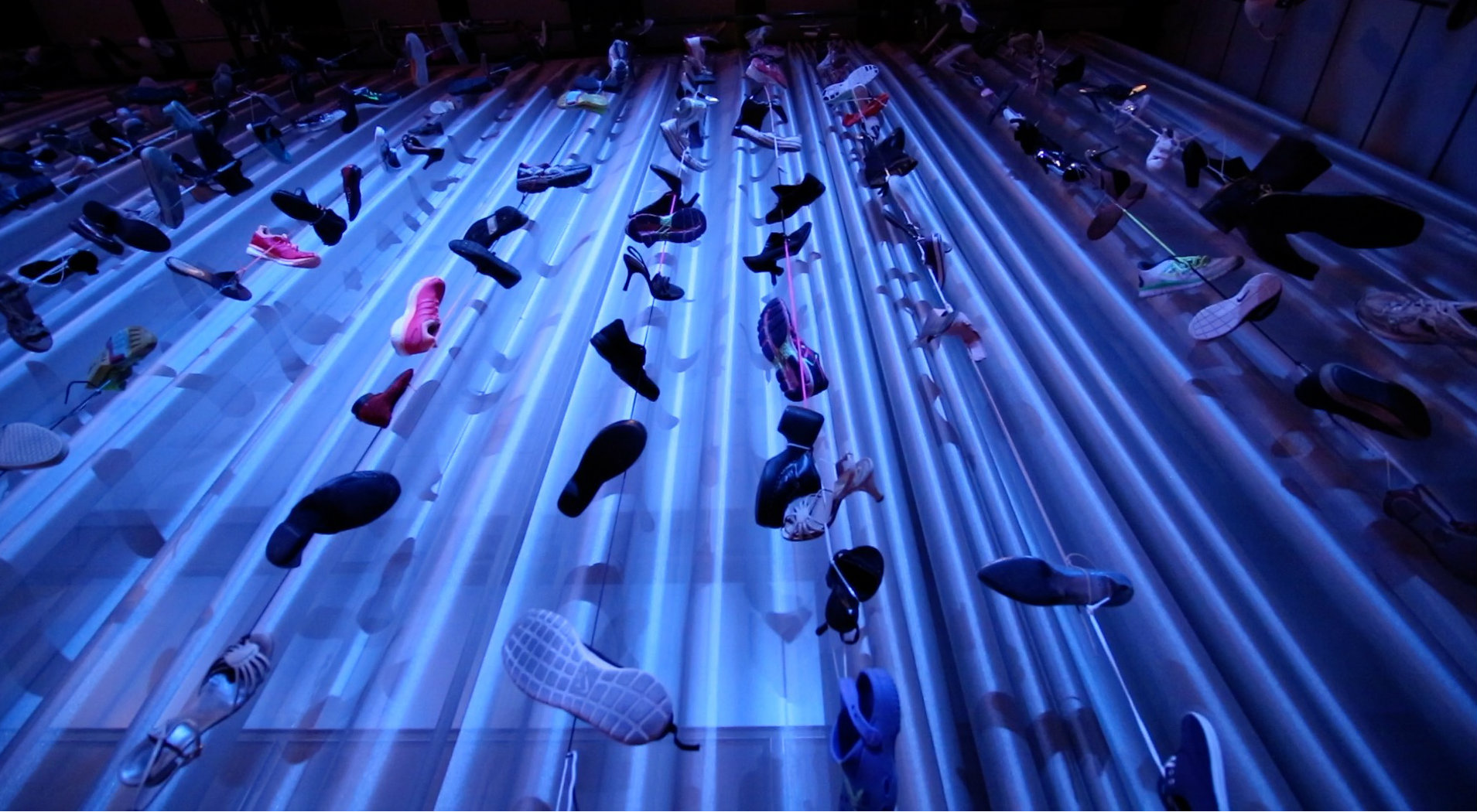 On average, there are about 21 shoes per strand and more than 200 strands lining Hamon Hall. To step into ‘The Cenotaph,’ audience members will have to step through the curtain of shoes.

In Hamon Hall, the shoes are now in separate piles. People have started to zip-tie them into long chains. When the show is over, any usable shoes will be donated to homeless shelters.

“This is one of the few times in my life,” she says, “that I’ve been truly in awe of what a bunch of people can do when they come together. Cuz a few hours ago it was all still in boxes, but now we’ve got some order.”

When people wander in from the Winspear lobby to check out what’s going on inside the Hamon this weekend morning, and the meaning of all these shoes is explained to them, they get quiet. This entire art installation is called ‘The Cenotaph,’ an ancient Greek term.

“It is an open-air monument,” Richards Bim explains, “that was usually used to honor people fallen in war. And it does not contain bodies. Their bodies were buried elsewhere.”

Cenotaph literally means ‘empty tomb.’ The JFK Memorial in downtown Dallas is a giant cenotaph. A cenotaph is empty to evoke all that was lost to death. All that’s now gone.