I do miss the blood.

I know, I’m surprised, too. But there’s not enough juice – carnal or emotional – in the current, goth-ish production of ‘Sweeney Todd’ at Circle Theatre. Not enough, that is, to make this great musical roar or sing the way it should. Director Joel Ferrell’s revival has the possibilities for a fresh re-imagining, which would be welcome. Put away the Victoriana, update a few things to our new Gilded Age of homelessness, grinding workloads and abuses of power. But, thanks to Sarah Gay – who is so stand-out forceful in her role as Sweeney’s partner, Mrs. Lovett – this show is practically ‘The Tragedy of A Pie Shop Owner’ instead of ‘The Demon Barber of Fleet Street.’ It’s hardly Gay’s fault; everything else is mostly just clever or underplayed – and not cut-your-throat compelling.

When Stephen Sondheim set out to adapt a 19th-century, violence-and-vengeance penny dreadful about a barber bent on payback for his unjust conviction, the composer said he had no grander aim than to create a lurid musical that would deliver some skin-crawling chills. Yet that modest aim led to one of the landmark achievements of ‘Sweeney,’ arguably Sondheim’s masterwork. It was the first musical – to my mind, the only one still – that is frightening, truly appalling, yet still is funny and musically resplendent.

Not what you might expect from a typical evening of Broadway entertainment. But it’s been said that in ‘Don Giovanni,’ Mozart expanded our musical vocabulary by using music, for the first time, to express fear – in that moment when the Don is dragged down to hell. Ditto ‘Sweeney.’ This is not the terror of Hollywood slasher films with their gotcha scares, though Sondheim does provide occasions for arterial effects. Rather, it’s the abiding worldview here that’s so rampagingly grim: We don’t need to be dragged anywhere; we’re already in hell.

The core of this bleak cosmology lies in the title character’s realization that human existence is diagrammatically simple and brutal: “We all deserve to die!” the maniacal Sweeney (Max Hartman) sings in a number appropriately titled ‘Epiphany.’ “Because in all of the whole human race / Mrs. Lovett, there are two kinds of men and only two / There’s the one staying put in his proper place / And the one with his foot in the other one’s face./ Look at me, Mrs. Lovett, look at you.” 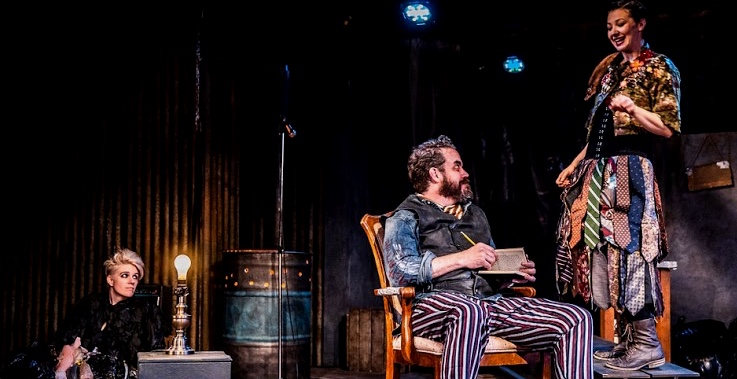 Let me add up our profits so far: Mary Gilbreath Grim, Max Hartman and Sarah Gay in Circle Theatre’s ‘Sweeney Todd.’ All photos by TayStan Photography.

But the desolation of spirit in Sondheim’s musical expands in every direction from there. It’s more overwhelming and built-in than Sweeney’s frustrated tirade would indicate. Sondheim crafted one of his most exquisite, crystalline songs, ‘Green Finch and Linnet Bird,’ for Sweeney’s daughter, Joanna. Taken from Sweeney and kept locked away as the ward of the lecherous Judge Turpin, Joanna sings about the caged birds being sold on the street. Immediately after the song, the street vendor himself is asked, why do the birds sing?

Oh, he replies. We blinds ’em.

That detail, the casual cruelty of it – blinding birds to entertain us – that’s the fatalistic universe of ‘Sweeney’ in miniature. Nothing escapes exploitation or pain and death – whether it deserves it or not.

This hell has been given a specific time and place: the Industrial Revolution. Mrs. Lovett, the shopkeeper, employs her eminently practical economic sense: Why not use Sweeney’s murdered clients to generate some revenue? Ergo, Sweeney’s revenge and her storefront become the logical extension of the squalid, mechanized capitalism of Victorian London. It’s Charles Dickens and Karl Marx armed with a sharpened razor and a dark, Satanic mill in the basement, baking human pies.

Except – the truth is that Hugh Wheeler’s script and Sondheim’s lyrics never mention any factories or industrial laborers. There’s not a scrap of steam-powered machinery onstage nor any villainous banker or company owner  – just a creepy judge. The Industrial Revolution background was supplied by Hal Prince, the show’s original Broadway producer, and his genius scene designer Eugene Lee (the former house designer for the Dallas Theater Center and ‘Saturday Night Live’).

They did it in epic fashion: Lee dragged in the brick-and-steel remains of an old New England foundry for his immersive set. A piercing, factory steam whistle even punctuated the scene changes. Voila, the show gained broader historical implications and economic analysis, more than just a nutjob with a blade: This is the kind of heartless, socioeconomic system that cranks out people like Sweeney and Mrs. Lovett. The set won Lee his second Tony Award. 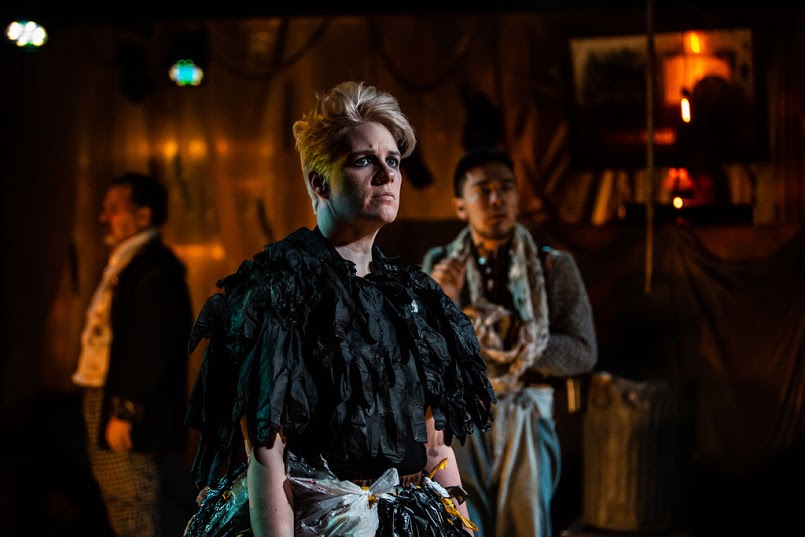 In his program note, director Ferrell subscribes to this accepted interpretation. No problem with that. But what’s actually most inventive and promising here is his attempt at a new take on ‘Sweeney’ – with contemporary steampunk-ish styles. Gone are the Victorian costumes, except for the occasional flourish like a recycled hat or vest. And set designer Bob Lavallee has taken advantage of Circle’s underground location to remind us we’re all trapped in a dimly-lit basement. He’s fashioned a subterranean, apocalyptic wasteland-or-other, not quite a sewer or a subway service tunnel, just a leftover industrial place where I-beams are lying about among crates and the ratty plastic curtains of a meat freezer. He’s even devised a wheeled wooden platform that elevates the performers so their heads are practically brushing the ceiling – emphasizing this claustrophobic, no-exit netherworld.

The particular script-and-casting arrangement at Circle Theatre draws on the minimalist Broadway revival of ‘Sweeney’ in 2005, which was often called ‘Teeny Todd.’ Director John Doyle reduced the original cast from more than two dozen to eleven and did away entirely with a pit orchestra. All of the actors performed musical instruments onstage. It was a daring choice because Sondheim’s near-constant musical underscoring is one of the things that elevates ‘Sweeney’ from the melodramatic to the epic and operatic.

At Circle, there are eight actors, and we occasionally hear them perform on a trombone, a French horn, a guitar, some percussion but mostly (and somewhat monotously) a piano (played by Aimee Hurst Bozart, who’s never seen). This impromptu band onstage adds to the inventively rough-edged, Poverty-Row look of the show. But it also produces a thin and different texture for the music, one much more dependent on individual singers. Music director Ian Ferguson plays the young sailor, Anthony, for instance, and he performs the love song ‘Joanna’ like an emo singer  – just a lone guitar and his strained voice, expressing longing for Sweeney’s daughter.

As strikingly cluttered as all the onstage instruments and post-apocalyptic get-ups may be, there are some peculiar inconsistencies. The mad beggar woman, for instance, played by Mary Gilbreath Grim, is dressed in torn plastic trash bags (the costumes are by Melissa Panzarello). But any sense of squalor is belied by Grim’s trim, David Bowie-meets-Annie-Lennox haircut. Noticing that, we notice as well that her trash bags are actually quite clean, not filthy or ragged at all. So her outfit is more a fashion choice and less a byproduct of homelessness. (Meanwhile, the judge’s and Sweeney’s outfits are certainly grubby enough.) 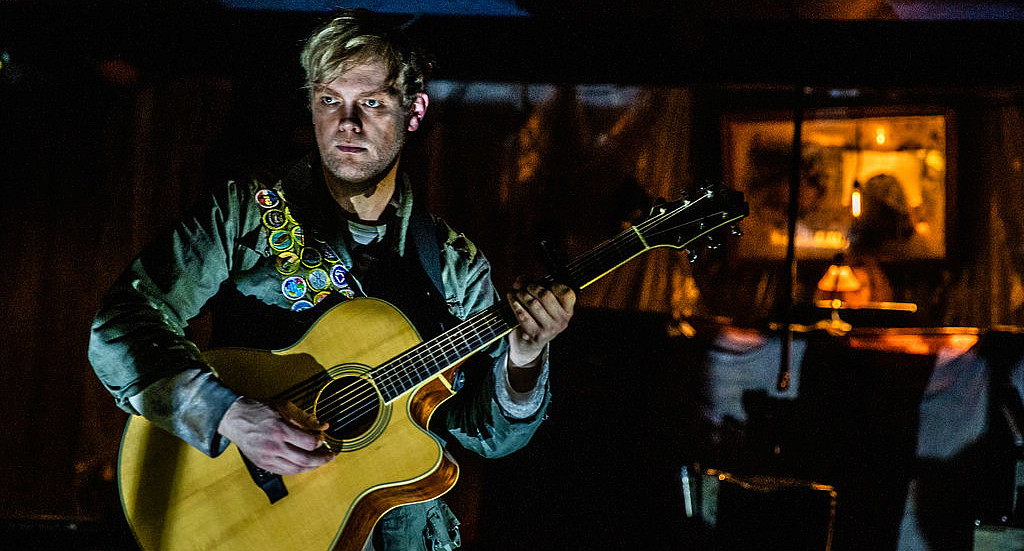 These kinds of details pull us out of Sweeney’s pitch-black universe: Where are we, exactly? And who are these people? We might wonder, for example, why Sweeney and Anthony repeatedly extol Joanna’s beautiful yellow tresses – when Carly Wheeler, who plays her, is clearly a brunette. Obviously, a blond wig is a simple enough remedy, so not choosing to use one must be deliberate. But why? Why Sweeney’s use of ordinary butter knives instead of his customary straight razor? In his shaving contest with the trumped-up, snake-oil salesman Adolfo Pirelli (also played by Mary Gilbreath Grim), Hartman’s Sweeney certainly strops his blade as if it were a razor.

It seems Ferrell is carefully, self-consciously avoiding many of the show’s long-established staging techniques, choosing new expressions, new tools, new movements. Great. But it’d help if this new world didn’t puzzle us – and if those choices didn’t often flatten or fudge the show’s emotional payoffs. When Mrs. Lovett presents Sweeney with his prized, sterling silver razor set – which she’s kept all the years he was away, serving his sentence – the Sweeney in past productions has typically grasped his razor, exultantly thrust his arm upwards as if defying God himself. “At last,” he shouts, “my right arm is complete!“

It’s our first, terrifying indication that Sweeney is more than a wronged man seeking justice. Vengeance has consumed him like a fever; it defines him. But here, Max Hartman acts more or less as though he’s – satisfied. Thanks. Got my razor back. Appreciate it. Hartman would seem to be a superb choice for Sweeney. He has the heft, the physical presence,the emotional force and the musical and acting chops the character needs. Yet Hartman seems oddly opaque, even reserved or withdrawn as he soft-pedals both the barber’s humor and his murderousness. Conclusion: This is the approach Ferrell wants.

And so, we come back to the lack of bloodshed. 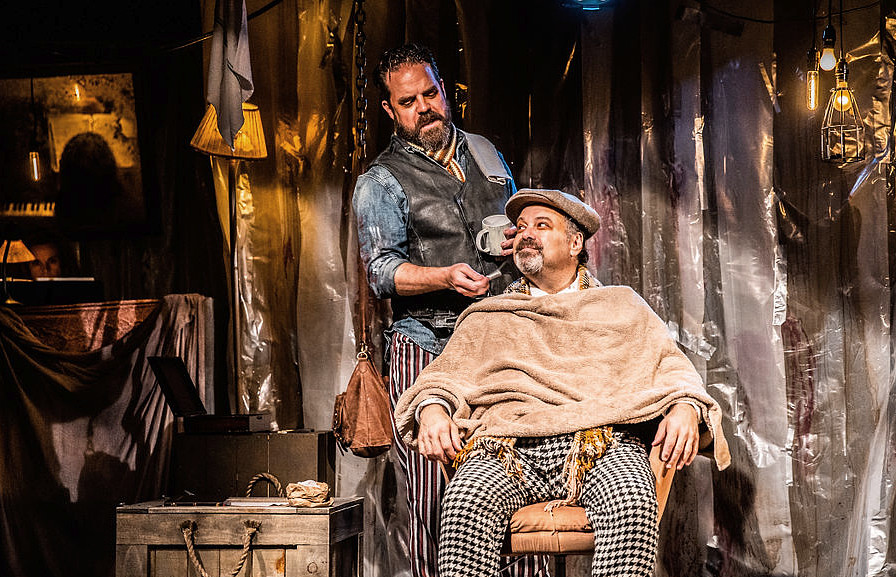 Don’t take too much off the top. Max Hartman and Randy Pearlman in Circle Theatre’s ‘Sweeney Todd.’

Admittedly, in the past, some directors have gone overboard with the Grand Guignol slashing and spurting. And it’s a bold move by Ferrell to abstain from all carnage during the show. But this lack of shock value leaves Randy Pearlman (who plays Judge Turpin as well as a string of Sweeney’s nameless victims) to squirm as he dies over and over again, making unconvincing and clownish contortions. This scene – with the same song, ‘Joanna,’ that Anthony delivers – is one of those moments unique to ‘Sweeney.’ It’s an emotional combination that no previous show had ever even attempted. The music is gorgeous and yearning: In a duet, Sweeney and Anthony both long for Joanna. But in Sweeney’s case, he’s resigned himself to never seeing his beloved daughter again, so he’s calmly murdering anyone, everyone. Without Joanna, without the possibility of revenge against Turpin, his life has no meaning, so why should theirs? At the same time, his methodical slaughters are actually comic. He’s like a glum waiter going through the motions of serving customers, absent-mindedly shoving food at them. Except he’s systematically poisoning them all.

That fusion of comedy, horror, beauty and pathos can be stunning, disturbing and hilarious. But without the horror, everything else is off-kilter. It’s not as funny, despite Pearlman’s flailings, and it’s not particularly heart-breaking, despite Hartman’s melancholy. I was actually surprised to see how bloodshed is so necessary for that scene to kick in. It fuels it, makes it uniquely Sweeney-ish.

In contrast, Sarah Gay’s Lovett manages to hit all these different notes of comedy and pathos and horror with seeming ease. She’s all-in with Nellie Lovett’s particular brand of dementia. Gay’s cracked voice, her rubbery energy, her comic, unrequited passion for Sweeney: She’s like a murderous Olive Oyl. She’s such a vivid character, you half-expect her to give up on Hartman’s low-energy, manic-depressive barber. Why not just murder him and go into business for herself?

As a director, Ferrell has done some of his best work with monsters and musical hells: ‘Frankenstein,’ ‘Cabaret,’ ‘reasons to be pretty,’ ‘The Rocky Horror Picture Show.’ And one scene here does give us a taste of the impact his approach to ‘Sweeney Todd’ might have delivered. The original Broadway production cut the musical number, ‘Mea Culpa,’ a reprise of ‘Joanna,’ sung by Judge Turpin. In it, Turpin whips himself into a sexual frenzy over Joanna and resolves to marry her despite her fear and hatred of him.

Subsequent revivals have re-introduced the number with the judge, alone in his study, punishing himself like a penitent wallowing in self-pity and self-loathing. But here, it’s a public scene: Ferrell has Randy Pearlman stand in a public spotlight like a guilty man in the docket while the rest of the cast, in unison, slaps the stage with belts. With each thwack, Pearlman jolts like he’s been electrocuted – or having an orgasm. The effect is sordid, creepy – and galvanizing.