The Civil War is our nation’s defining convulsion, our Homeric conflict — as novelist Robert Penn Warren put it. It was the bloody resolution of what it means to be American: how we think of liberty today, democracy, ‘state’s rights,’ race, citizenship, even who qualifies as a human being. All of these were decided on that chopping block.

‘The Road To Appomattox,’ presented by the Contemporary Theatre of Dallas, through May 22.

So it’s not surprising that playwright Catherine Bush’s attempt to link the death throes of Robert E. Lee’s army with a contemporary couple’s unhappy road trip is a metaphor stretched a bit too far. In ‘The Road to Appomattox,’ Lee loses, of course, but it’s the couple who are diminished by the comparison, and not in an amusing way, a case of small-minded quarrels looking humorous in the face of vast, violent destinies being thrashed out, a desperate general trying to find rations for his starving troops while the Confederacy itself deservedly dies around him. No, Steve and Jenny Weeks are, at best, only intermittently entertaining. 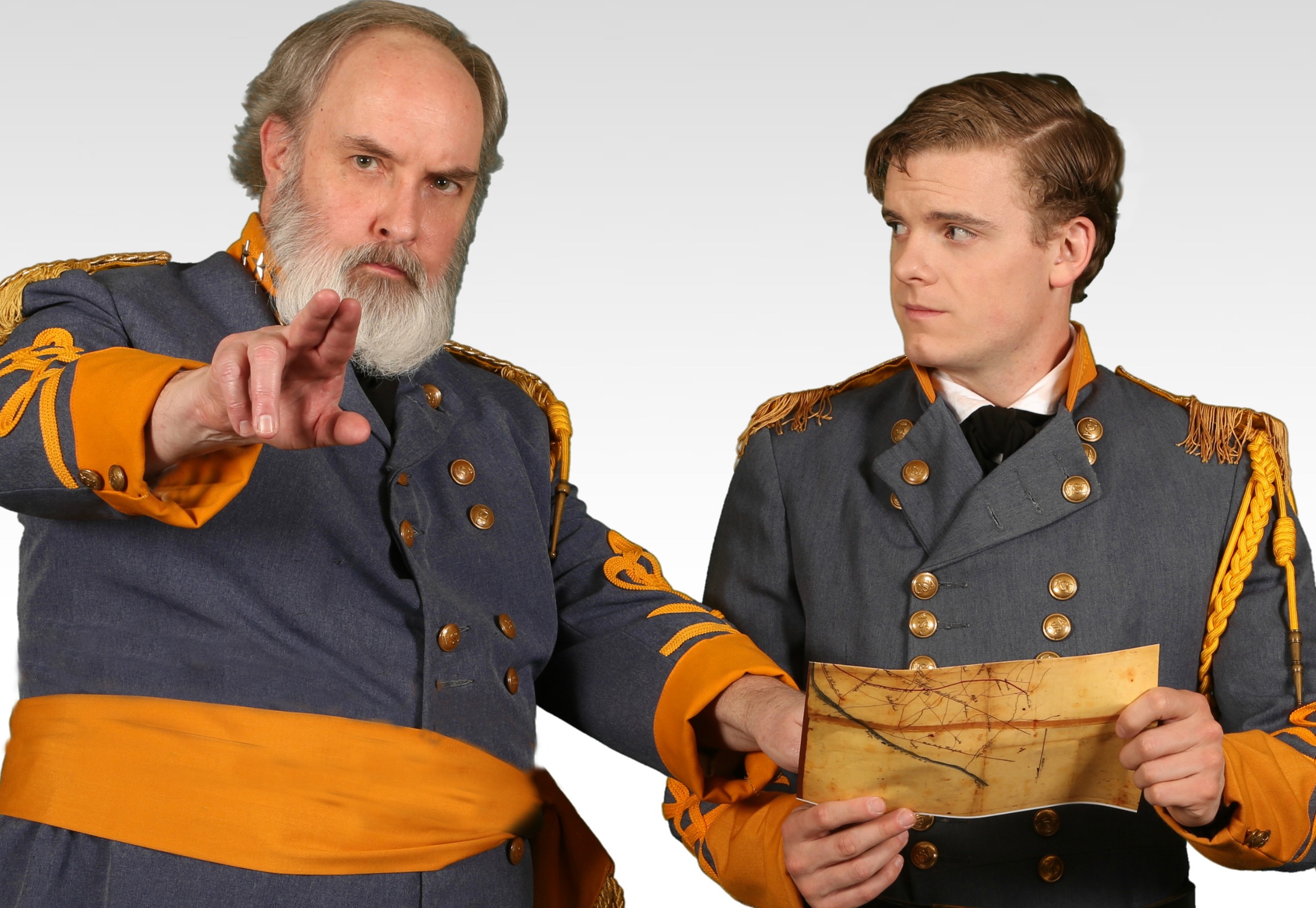 And they don’t even seem particularly necessary. Bush is playwright-in-residence at Virginia’s Barter Theatre. In a program note, she explains that the Barter’s producing artistic director asked her to write a play about Robert E. Lee. Faced with the task of making the South’s military saint into a flesh-and-blood character on stage, she oddly chose to set Lee’s plight against a modern couple tracking his retreat via roadside historical markers. The husband (Jeff Swearingen) recently became a “buffy” — a Civil War buff — having found an old rebel cap and a mysterious military message tucked away in his great-great-grandfather’s trunk. He’s now the obsessive sort who drags his reluctant wife (Catherine DuBord) to every battlefield he can find.

This set-up is an odd choice because it’s not clear how it would humanize Robert E. Lee. One could dispense with Steve and Jenny entirely from ‘Appomattox,’ and Lee would not fade into the distance as some arcane figure from the past. Instead, on Rodney Dobbs’ bare-wood-and-stretched-canvas set, ‘The Road to Appomattox’ alternates scenes between the contemporary couple and General Lee in his tent, trying to equate the two somehow. It also offloads a fair amount of historic context via an academic expert who conveniently stops by on his motorcycle. He fears the Weekses may be stranded and offers to help. He then sticks around to serve as both a walking bibliography and, in actor Kevin Moore’s overly forceful performance, a studly temptation for the wife.

Tom Stoppard makes this stuff look easy, the way he spins past and present together, the way his characters hatch literary and personal interpretations like butterflies. That Stoppard was Bush’s model seems clear. It turns out Jenny Weeks may hate Civil War history, but she’s a scientist, so the Second Law of Thermodynamics gets enlisted here. When Bush applies it to the decline of the South, the deterioration of a marriage, the fall of Humpty Dumpty and Lee’s inability to unite his shattered corps, one senses entropy getting tied on everything as an attractive bow. But the similarity Bush sees uniting these figures — they’re “stuck” in some fashion and entropy is setting in — is so broad as to provide no deeper understanding. They may all get wrapped together, but insights — like the AAA batteries one can never find — have not been included. 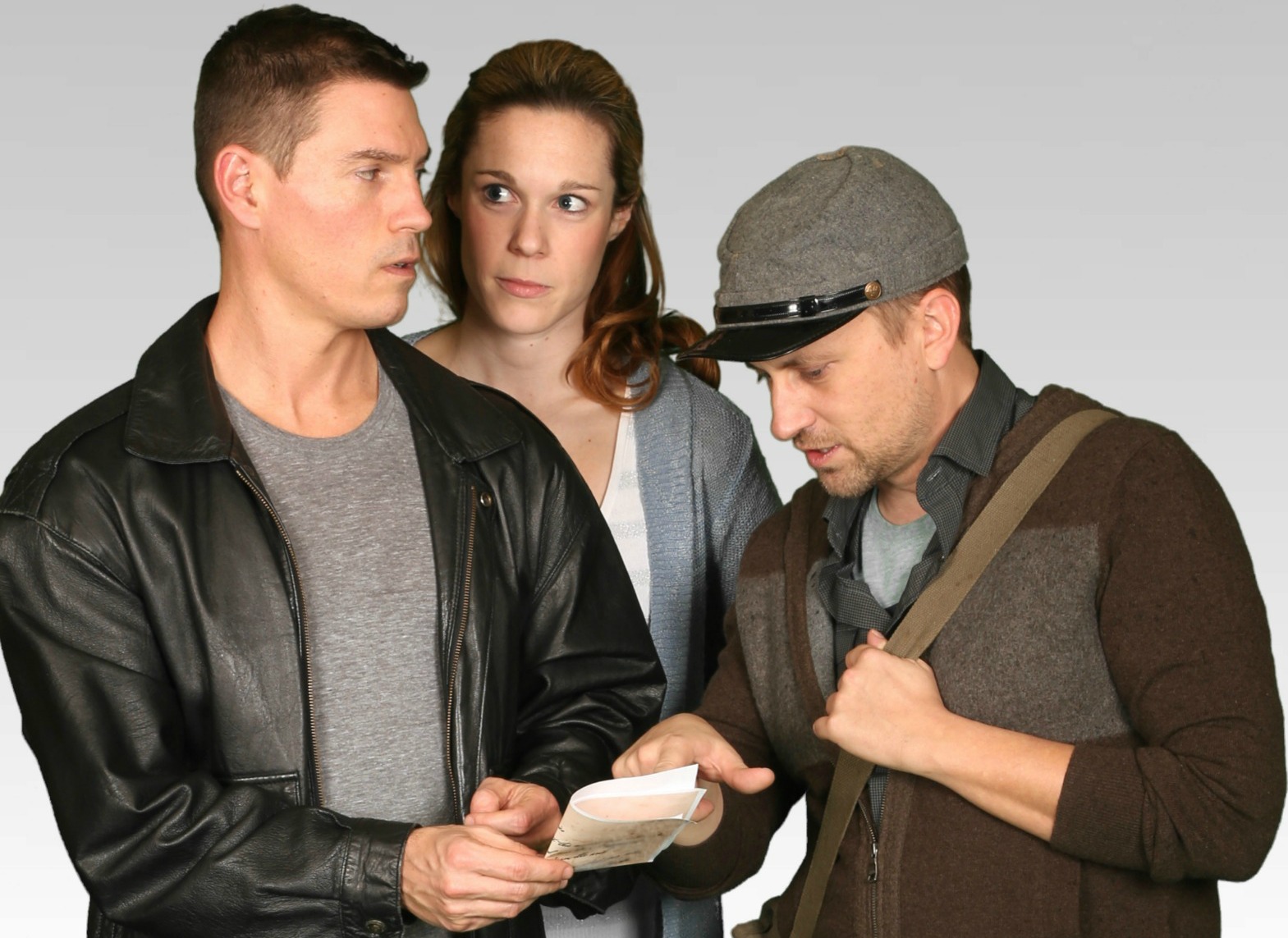 Kevin Moore, Catherine DuBord and Jeff Swearingen in ‘The Road to Appomattox.’

Even so, Bush’s basic dramatic ploy — to tie a significant historic upheaval to present-day people — actually could be effective (consider Suzan-Lori Park’s ‘Top Dog / Underdog’ where Lincoln’s assassination shapes two black hustlers’ lives). But the backstory Bush supplies the Weekses — how they became emotionally stuck — feels disconnected from the rest of the proceedings. By the end, one of the characters has been more or less kidnapped, and a possible historical mystery is left unsolved. Yet improbably — spoiler alert, well, no, not really — none of the characters seems to care.

The great Southern historian C. Vann Woodward, among others, has noted that although the Civil War is our national tragedy, it produced no great play, poem or novel (‘The Red Badge of Courage’ comes closest, perhaps, although it, like ‘The Road to Appomattox,’ fails to address race). Yet Woodward notes that any such lack was made up by the brilliant prose stylists who did write about the war in memoirs, essays and speeches: Lincoln, Sherman, Grant, Chesnut, Twain. I bring this up because much of what Lee says in Bush’s play — he has some of the best lines here — is derived directly from personal accounts, including that of his aide-de-camp, Lieutenant Colonel Walter Taylor.

Taylor was one of the early proponents of the ‘Lost Cause’ myth (the white, romanticized reinterpretation of the Confederate war effort as a noble resistance to Northern aggression, a war effort that magically had little to do with slavery). And I bring all that up because in her program note, Bush makes the improbable claim that Lee — by rejecting any attempt at continued resistance against the North through guerrilla tactics — helped re-unite the country as much as Lincoln.

Well, no. Not really.

That is, not unless Lee risked his political future by passing the 13th amendment, banishing slavery. And not unless Lee got a bullet in the back of his head from an enemy fanatic — becoming a martyr who united the country in grief, shame and horror. In other words, although Bush describes herself as a native Northerner who was wary of the mythology surrounding Lee, she’s gone to some lengths creating this unwieldy, modern-day set-up to recount Lee’s last scramble — and then she portrays him as a brilliant general trapped in a hopeless, tactical situation. In short, his are mostly military problems. The only moral quandary Lee faces is one he recalls from four years before, when he chose his home state of Virginia over his military oath to the United States. And that particular case of being “stuck” doesn’t seem pertinent to the Weekses’ marital discord.

At the end of ‘The Road to Appomattox,” when Lieutenant Colonel Taylor (Matt Holmes), confesses to Lee that he cannot walk out with his commanding officer and face surrendering to Grant, the quiet, simple moment is more convincing, more touching than anything the Weekses struggle with. Other scenes with Lee might be equally as affecting if, under Susan Sargeant’s direction, Robert Banks didn’t play the general as bombastic and sarcastic. Lee was universally hailed for his kindness and dignity (not for nothing was he called the ‘last gentle knight’). When Lee does get sharp with an underling, it would be all the more meaningful, more cutting, if it came from someone who doesn’t bellow.

Recently, the Contemporary Theatre of Dallas has been living up to its name by presenting local premieres of new plays — like ‘The Road to Appomattox.’ A very welcome effort. Here’s hoping the company continues to do so — with better scripts. The lesson one might take from General Grant in his pursuit of Lee applies: dogged persistence can pay off.