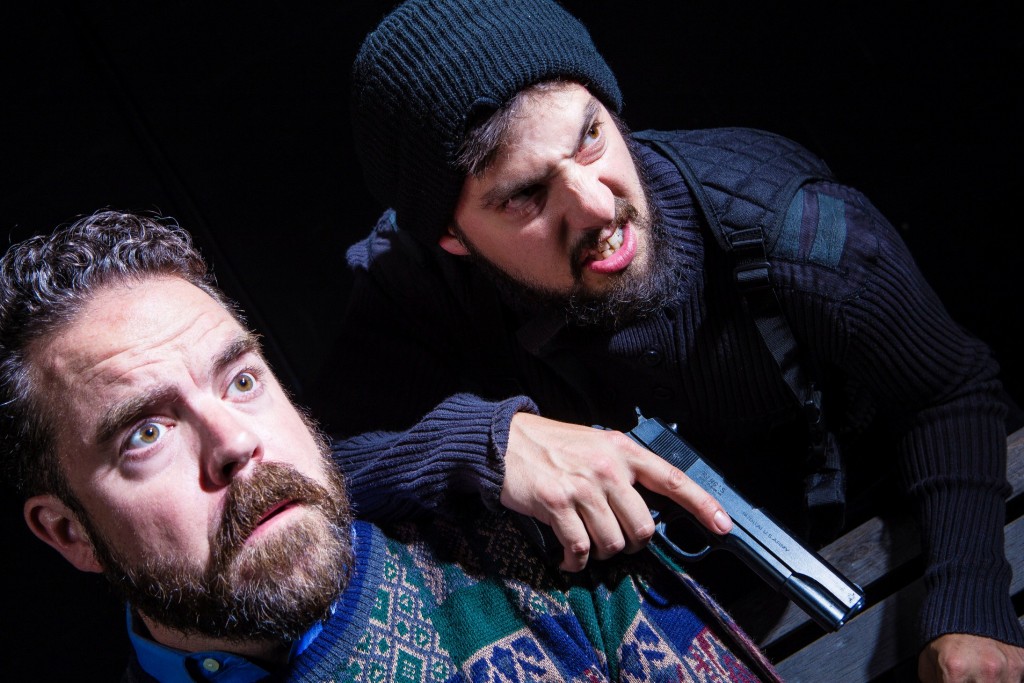 Max Hartman as Jeffrey and Drew Wall as Ben in ‘The Totalitarians.’ Photos: Matt Mrozek.

Political satire usually doesn’t age well. What were once hot topics fade quickly from headlines and memories. Who remembers why Kenneth Starr was ever important? What was a hanging chad? Even the best of Saturday Night Live‘s political sketches from only 10 years ago would have to come with footnotes. Kitchen Dog Theater is presenting the regional premiere of the political satire, ‘The Totalitarians’ — which was actually written two years ago. But in his review, KERA’s Jerome Weeks says, when it comes to political campaigns, ‘The Totalitarians’ can still sound like last night’s newsfeed.

Kitchen Dog Theater presents ‘The Totalitarians’ in the company’s new home, The Green Zone, in the Design District, through Dec. 19.

Every so often, Kitchen Dog Theater finds a play with a role that unleashes Tina Parker. Parker is the company’s co-artistic director, and when she goes crazycakes onstage, it’s a theatrical event.

Parker can certainly play mousey little characters; she was attorney Saul Goodman’s secretary on TV’s ‘Breaking Bad.’ But onstage, Parker is a big presence with a big voice — and when her characters are equipped with tiny brains, Parker has zero inhibitions about turning them into a ten-car pile-up wrapped in pantyhose. In Kitchen Dog’s new production, ‘The Totalitarians,’ Parker plays Penelope Easter, a former roller derby queen. She’s running for lieutenant governor of Nebraska. Her family life’s a mess, and she’s completely unqualified. But she can deliver hilarious, angry gibberish with complete conviction. 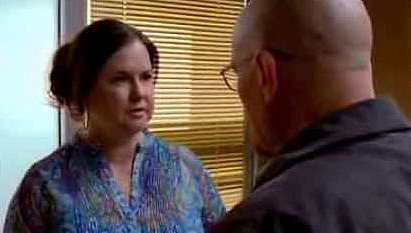 “These are bad, bad times!” Penelope bellows in the speech that galvanizes her campaign. “So frippin’ bad that even the rights we thought were un-in-alienable are under a full assault.Life is under attack! Murderers! Viruses! Avoidable accidents! And of course, I don’t think my opponent – with his bulletproof Cadillacs and access to medicine – really understands how we could all die — [snaps fingers] — just like that. I understand ‘cuz I, Penelope Easter, will fight for your life! Will you fight for mine?”

As one character asks, what does any of that even mean? Well, what it means is Penelope Easter can channel and stoke people’s resentments and fears. She can’t articulate any of them, but who cares? We can’t either. For many of us, that only makes her a more “authentic” candidate.

It’s too bad Penelope isn’t the main character in ’The Totalitarians.’ Instead, it’s her campaign manager, Francine, played by Leah Spillman. Francine knows Penelope’s stupid but Francine’s desperate to prove she can run a winning campaign. Thus, Penelope becomes the perfect conduit for Francine’s own, inchoate frustrations and needs: If her speechwriting can get an idiot like Penelope elected, it’s on to the nationals.

On the other hand, Francine’s doctor-husband Jeffrey (Max Hartman) comes to fear that Penelope might actually be dangerous if she gets into office. He’s been listening to a young cancer patient of his named Ben (Drew Wall). If Penelope represents one political extreme — let’s call her the conservative heartland outsider — then Ben’s her opposite number. He’s the bitter liberal cynic who pushes his distrust of corporate money into paranoid conspiracies.

After he declares 95 percent of all of Nebraska — energy, communications, agriculture, land — is already owned by a wealthy cabal, Ben vehemently informs Jeffrey that “a secret, well-stocked militia is quietly being trained in an underground base in Broken Bow, and then after the next ‘election’ when everything is in place — boom! Checks and balances gone, government, money, minds, material objects, everything under control. Nebraska overnight will become a totalitarian regime.”

Unfortunately, ‘The Totalitarians,’ like so many American political satires, ends up in the too-easy position of declaring a pox on both sides — as if the different sides carried equal weight, equal merit. But what “side” is Penelope even on? It’s clear playwright Peter Sinn Nachtrieb set his sights on the populist likes of Sarah Palin and Michelle Bachmann (the malapropisms, the husband widely rumored to be gay, the wild game hunter — with a bow, here, instead of Palin’s preferred rifle). But none of the aggressive positions either politico has declared on, say, abortion or immigration or taxes ever comes out of Penelope’s mouth. Of course, yes, Penelope is a loose cannon. She’s more a lucky, unscrupulous opportunist than any sort of ideological puppet. Anything she’d spout, she’d probably countermand the next moment, especially if there’s a bottle of champagne nearby.

Meanwhile, if Penelope basically has no political content — no agenda other than unloading her gripes and getting herself elected — Ben is nothing but party-line, political analysis. Until, that is, the play’s big revelation kind of empties him out. Playwright Peter Sinn Nachtrieb seems intent on spoofing just the wretched rhetoric, the canned oppositions and unhinged-from-reality speechifying our political discourse has fallen into. Fine, but there really are things at stake in politics other than just campaigners making up nonsense.

Ultimately, against these two characters, Francine and Jeffrey struggle to find a position in the middle somewhere. By the end — too feebly and too late — the couple becomes an attempted counterweight, a kind of small-scale reality principle against all the rage flying around. But exactly what the couple is supposed to represent is never clear — beyond a married, middle-class normalcy muddling through somehow.

So OK, Nachtrieb’s political satire is a bit of a muddle. But it’s mostly a fun muddle. Director Christopher Carlos keeps ‘The Totalitarians’ running along as a loud, dark farce. Sometimes too loud — as if to keep up with Parker’s rampaging Penelope, everyone else goes up several notches on the frenzy scale.

No matter. Frankly, as long as Tina Parker’s onstage here, we don’t care much about the rest. Too many real-life campaigns (and their donors and, yes, their media coverage) have turned our electoral politics into the Great American Traveling P. T. Barnum Carnival and Power Grab.

Unlike them, Tina Parker is a trainwreck — who’s actually fun to watch.