When he’s not writing serious dramas like the Pulitzer Prize-winner, ‘Doubt,’ playwright John Patrick Shanley occasionally likes to hop behind the bar and uncork another bottle of a favorite intoxicant. Call it ‘The Terrifying Courtship.” Typically, it’s a comic romance that flares between two emotionally wounded, working-class sorts who are deeply attracted to each other even as they are conflicted about themselves and their feelings. Such is ‘Outside Mullingar,’ the latest audience charmer by Shanley on the menu at WaterTower Theatre.

If you’ve never indulged in earlier Shanley beverages such as ‘Danny and the Deep Blue Sea,’ ‘Savage in Limbo’ or  ‘An Italian-American Reconciliation,’ you’ve still probably gotten tipsy on a particular vintage of his. That would be “Moonstruck” — the 1987 rom-com about a young Italian widow (Cher) in love with the wrong man, an angry, brooding fellow (Nicolas Cage) who seems intent on both wooing her and driving her mad. ”Moonstruck” won both Cher and Shanley some Oscar gold, and “Outside Mullingar” is Shanley’s latest variation on the same conflict: would-be lovers bantering and bickering with each other as they try to overcome their encumbrances and fears of intimacy.

This time, all the pleasant and unpleasant tumult is set on adjacent farms in the Irish Midlands. Ergo, Shanley’s earlier bill of fare — red wine, pasta and opera — is replaced here by whisky, tea and blarney. This is Stage Ireland, where it’s always rainy and green, and everyone is quaint, morose and amusing. “Outside Mullingar” traffics in some thoroughly worn and familiar tropes, yet it remains undeniably appealing, thanks to a fine WaterTower production and cast (directed by the hard-working Rene Moreno) but mostly to Shanley’s deft way with dialogue and character. He keeps things familiar and beguiling but just prickly and unpredictable enough that we don’t get too cozy with the accents and the Guinness. 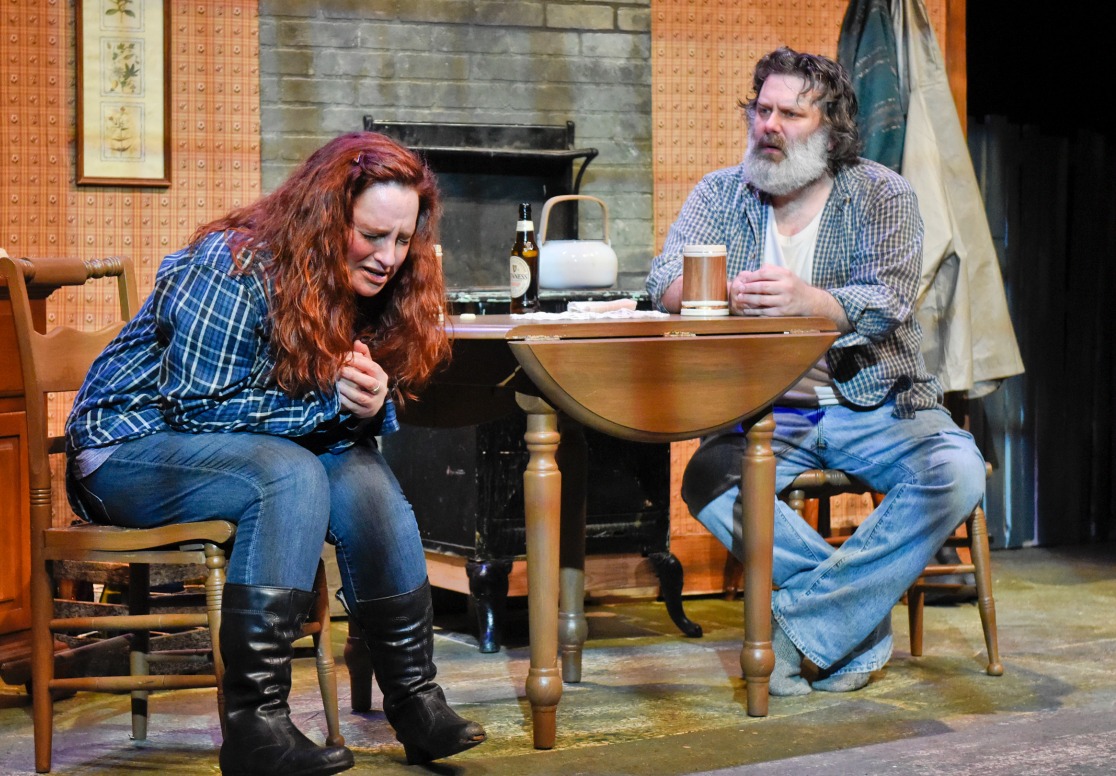 Was it something I said? Jessica Cavanagh and Jeremy Schwartz in ‘Outside Mullingar.’ All photos: Karen Almond.

Moody neighbors since childhood, Anthony Reilly (Jeremy Schwartz) and Rosemary Muldoon (Jessica Cavanagh) are now middle-aged adults with seriously aged parents. Indeed, Rosemary’s father isn’t getting any older: After his funeral, she and her mother, Aoife, stop by the Reillys for some tea with Tony, Anthony’s father. It’s during Mama Muldoon’s reflective conversation with Tony about the future that awaits them both (“You’ll be dead within a year!” he observes with satisfied finality) that we learn of the intertwined complications that’ll bedevil everyone for the next 90 minutes of stage time.

Although son Anthony has been the family plow horse for decades, Tony is planning to deed the farm to a nephew in America. To Anthony’s drop-jawed face, his father (John S. Davies) explains that Anthony has always taken after his dead, daft mother’s side of the family, he’s never been a ‘real’ Reilly and he has no true love for the auld sod. It gives him no joy.

So in all likelihood, the nephew’ll sell the place. If he could find a buyer, that is. Twenty years earlier, when Tony was in need of some ready cash, he sold the front access to the farm — to the Muldoons. But as if designed precisely to hinder the hoped-for return of that land, Rosemary has held a long-simmering grudge against Anthony. When she was six, he pushed the would-be ballerina into the dirt. He was 13, he doesn’t even remember the incident. But she certainly does, so she’s not about to sell the access road back to the Reillys.

Where Shanley’s Italian characters aimed for high opera and apache dancing in their hormonal clashes, his Irish mostly brood and mutter sullen wisecracks as a way of expressing affection. Which perhaps explains why, of all of Shanley’s plays, the romance in “Outside Mullingar” doesn’t flare and flash and resolve in what seems like a few days. It’s a more gentle comedy, and it takes years for the melancholy duo to unfold themselves (but have no fear: the intermissionless play doesn’t feel long).

Otherwise, as noted, these are Pure Shanley People — and wonderfully captured here by the WaterTower cast. This is the playwright’s own character description of Danny from the script of “Danny and the Deep Blue Sea”: “He’s dark and powerful.” He’s stubborn and torn, yet “he finds it difficult to meet a woman’s gaze.” That’s pretty much a thumbnail sketch of Anthony — as portrayed by the looming Jeremy Schwartz at his beardiest, broodiest and most sweetly introverted.

And this is Shanley’s description of Denise Savage from “Savage in Limbo”: “She’s small, wild-haired, strong, belligerent, determined, dissatisfied and scared.” The very picture of Rosemary in Jessica Cavanagh’s capable hands– if you scratch the “small” and make “determined” into “positively obsessed.”

Stubbornness in triplicate: John Davies, Jessica Cavanagh and Gail Cronauer in ‘Outside Mullingar.’

One warning: There’s always been a large streak of the improbable, even the borderline ludicrous in Shanley’s romances (recall Cage waving his prosthetic hand and raving about how his brother ruined his life — you’re certain his despair is meant to look demented). This is Shanley’s way of amplifying the ardor to almost heroic-tragic levels (they’re so frustrated, they’re so hot for each other, they’re so impulsively ethnic, things are bound to go bad) while almost tipping it over into the completely nonsensical or self-conscious (just get over yourselves, you think; surely, you’re not going to break up over this silliness).

‘Mullingar’ is perhaps the most extreme example of this. The land feud is such an old-fashioned plot device, but here it’s also laughable in its long-term yet small-time irritation (the Reillys are forced to go through two gates to get to their own house). And upon learning what it is that has kept Anthony all these years from declaring his obvious attraction to Rosemary, you may be tempted to blurt, “You’ve got to be kidding.” The play is lurching into sweet, demented hokum.

But it’s a sign of Shanley’s craft that any lack of credibility doesn’t really damage our enjoyment. The land quarrel combined with the lovers’ misunderstandings remind one of Eugene O’Neill’s heartbreaking ‘Moon for the Misbegotten.’ And for Shanley’s emotional turnarounds to truly catch us, he must surely intend for us to have that fear in the back of our hearts, that all this could all too easily turn to bitter stone, to lonely tragedy.

But while O’Neill’s plays can be funny (yes, they can), he never truly understood happiness — happiness as a settled state (his one wistful, conventional comedy, ‘Ah! Wilderness’ offers an end to restlessness and ache that feels more hoped-for than real). On the other hand, Shanley projects a smiling and accepting sensibility here — even in the face of death. With his love of language, with his characters’ mule-headed lack of self-knowledge, we have the delightful suspicion from the start that nothing this farfetched and warm could end truly badly.