If Aaron Loeb’s world-premiere drama,  ‘The Trials of Sam Houston,’ demonstrates anything, it’s that if you recount the stirring creation of ‘The Star-Spangled Banner,’ which was written as the British bombarded Fort McHenry, if you have characters sing that anthem, if you project a glowing image of a giant American flag, and all this comes after Sam Houston delivers a rousing defense of his honor, a defense that includes extolling the American character as so noble it will outlast the cosmos itself – if you manage all this, then you will indeed get many of us on our feet, clapping.

The Trials of Sam Houston,’ presented by the Dallas Theater Center at the Kalita Humphreys Theater, through May 13th

Not that there was ever much doubt on that last point, but one welcomes the confirmation from director Kevin Moriarty’s production at the Dallas Theater Center. Just what is it we’re applauding is probably unclear to most, but perhaps we simply appreciate how insistently the show fired off its patriotic huzzahs. All that was needed was some t-shirt cannons and maybe a confetti drop.

It’s unclear because, before all of the oratorical bottle rockets go off, ‘The Trials of Sam Houston’ is a bit of a muddle. At moments, Loeb’s drama is gripping enough. It would be a poor play if it weren’t gripping at some point, given Houston’s momentous life. It included not only his being left for dead at the Battle of Horseshoe Bend with two bullets in him but also becoming the president of the Republic of Texas, its first United States senator and then its governor, followed by his committing career suicide by refusing to join the Confederacy. He was the only Southern governor brave enough to do so.

But ‘Trials’ never resolves exactly what it’s about. Is this a ‘profile in courage’ – hailing a hero most people outside of Texas have never heard of (seeing as John F. Kennedy’s ‘Profiles in Courage’ is more than 60 years old)? If so, it’s an odd choice, given that Houston is often entertainingly portrayed here as a funny and violent drunk. Or does Loeb use Houston’s life to examine America’s long-running war over race? Much of the play is hip-deep in issues of slavery. But why then, does the trial that takes up most of the play have nothing to do with race relations? In 1832, Houston was brought up on charges for assaulting a Congressman who’d called him a fraud. 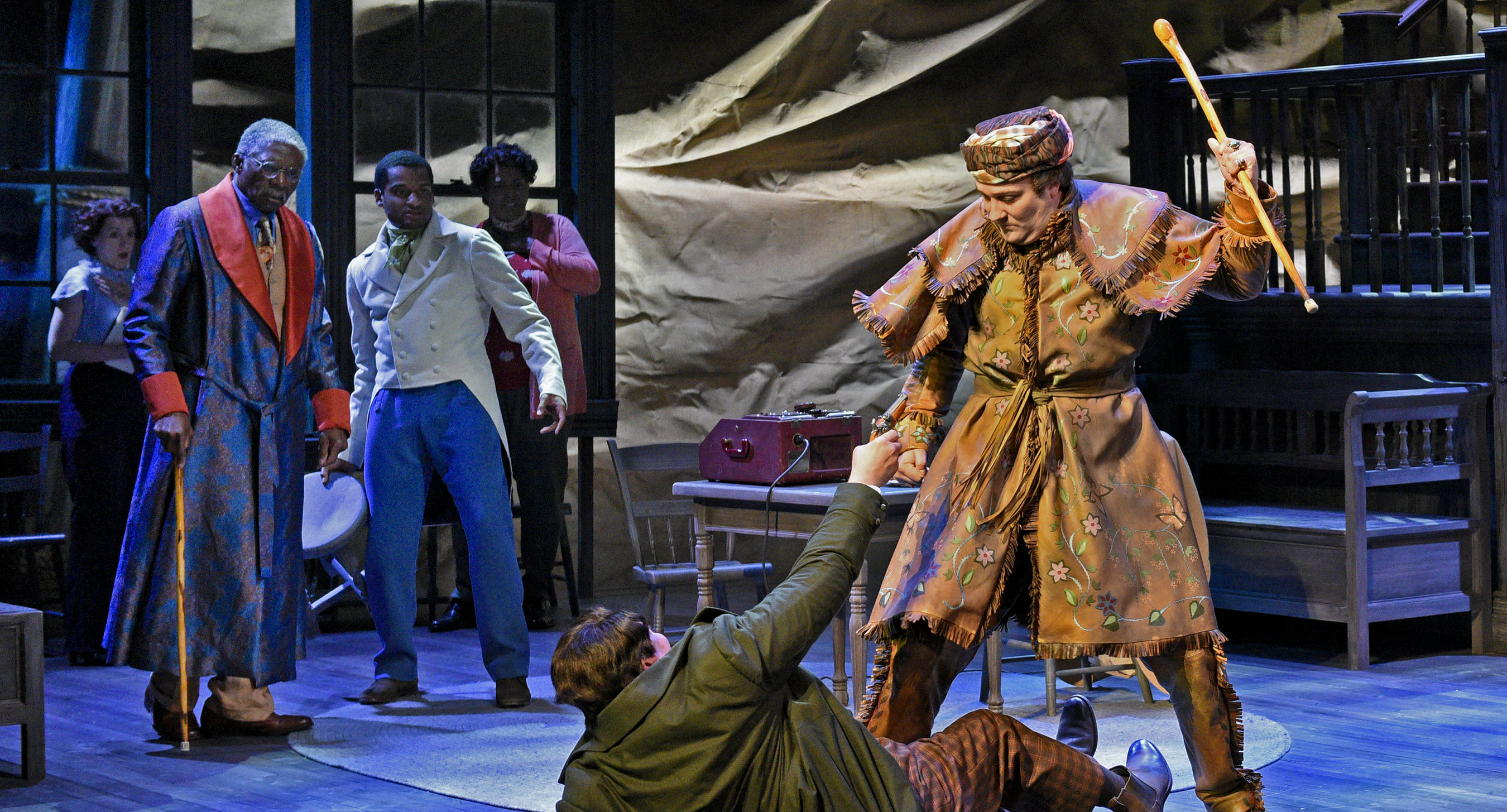 Actually, it’s no surprise that any play about Houston gets lost in his own brambles. He is perhaps the most conflicted and compelling figure of the Texas Revolution, a man difficult to encompass within a typical bio-drama. Even today, just why Houston’s first wife Eliza Allen left him so soon remains a mystery. Yet it’s one of the major pivot points in his life: In shame, he resigned as governor of Tennessee.

And his contradictions and puzzles never stopped: As a fellow populist from the wilds of Tennessee, Houston was considered President Andrew Jackson’s protege and fought loyally with him against the Creek Indians. But he angrily broke with Jackson over the harsh treatment of Houston’s beloved Cherokees. After Houston exiled himself to Texas and defeated General Santa Ana, he could probably have been proclaimed King of Texas: He won 80 percent of the vote to become president of the Republic. Yet Houston was eventually driven out of office by angry secessionists. He repeatedly risked his public career by opposing the expansion of Southern slavery – even as he personally owned a dozen slaves.

Houston seemed to realize slavery threatened the very basis of America – even as it was a practical benefit to him. Over the course of his life, Houston was a great orator, a political leader who rode the populist and imperialist forces that roared through 19th-century America: nativism, expansionism, slavery, class conflict between frontier Westerners and old-guard Easterners. And he was eventually brought down by those same forces – as well as by his own depression, alcoholism and even his more heroic, self-sacrificing instincts. Houston died with his widow unable to find a Texas funeral home willing to bury him.

In some ways, he represents the best and worst of Texas. Perhaps the Cherokee summed him up best. They nicknamed Houston both ‘the Raven’ (traditionally, a shrewd animal, a trickster, a figure of transformation) and ‘the Big Drunk.’

To give shape to some of these events and characters, Loeb has focused on two of Houston’s ‘trials’: his prosecution by the House of Representatives for assault and his later stand against the Confederacy. Loeb relates these uproars through the memory of Jeff Hamilton (Charlie Robinson), whom Houston bought as a slave when Hamilton was only 13. The flashback set-up is formulaic enough: A historian (Kate Wetherhead) arrives with a recorder to get the aging Hamilton’s account of life with the long-deceased Houston  – and we’re off. 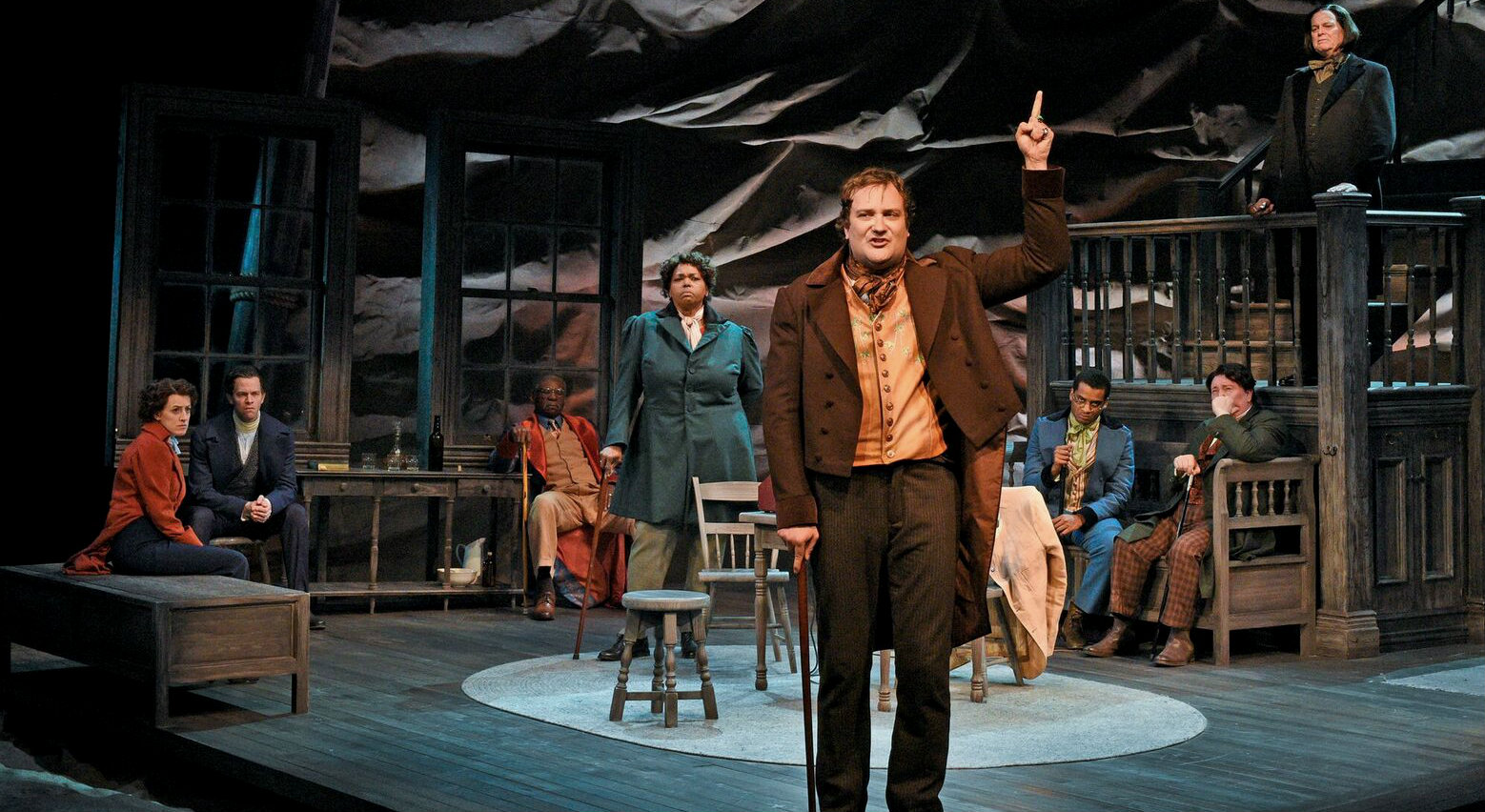 The flashbacks turn out to be tricky, though. Hamilton wasn’t even purchased by Houston until some 20 years after the street brawl with the congressman. Hamilton is relating what was told him decades later. And his own daughter (Liz Mikel) occasionally interjects that he’s telling Houston’s story differently this time. Who are we to believe?

What’s more, we have eight actors portraying 22 characters, including different actors playing old and young Jeff Hamilton and old and young Sam Houston. So we have time shifts and casting shifts. Director Moriarty’s notable success here lies in making most of these changes (including changes in race and gender) relatively easy to follow, unless you’re perplexed by non-traditional casting (Liz Mikel plays John Quincy Adams, which is fitting in a way, given Adams’ often solitary stand in Congress for abolition).

But if, as the saying goes, no man is a hero to his valet, what are we to make of a slave’s memories of his former master? Is he recounting brutalities or mourning a fallen benefactor? ‘Trials’ goes out of its way to depict slavery as heartbreaking while portraying Houston as a great (if headstrong) man. Yet it also charges him with utter callousness toward Hamilton. And these different points are not assembled into some complex, multi-faceted view. We’re given no central explanation, no core understanding of Houston’s nature nor Hamilton’s basic feelings toward him.

To take one example of how oddly assembled the play feels: The sole reason “The Star-Spangled Banner” figures so prominently in ‘Trials’ is that the man who defended Houston in his assault case was the very capable attorney, Francis Scott Key (Kate Wetherhead). Yes, that Francis Scott Key. Having Key try to defend Houston before hostile Republicans while he’s thoroughly hungover from a night of drinking with his client – these are the dramatic mechanisms of a stage trial, and the trial is the centerpiece of the play. Fine. But having Key then relate at length how he came to write our national anthem would seem perhaps … unnecessary?

Still, now that Loeb has introduced the rocket’s red glare and the land of the free, one would think – in keeping with Jeff Hamilton’s personal interest in slavery – he might mention that Key himself was a wealthy slaveowner. Or the play might bring up the anthem’s highly controversial third stanza with its derisive reference to “the hireling and the slave.” It’s one reason that, today, black athletes have been taking a knee during pre-game anthems.

But, you ask, isn’t all this stuff about stanzas and Key’s background getting us just a little lost in the weeds? Our main story, after all, concerns the relationship of Houston and Hamilton. Right. So you felt introducing the attack on Fort McHenry made sense? It happened 39 years before the two men ever met and neither was there. 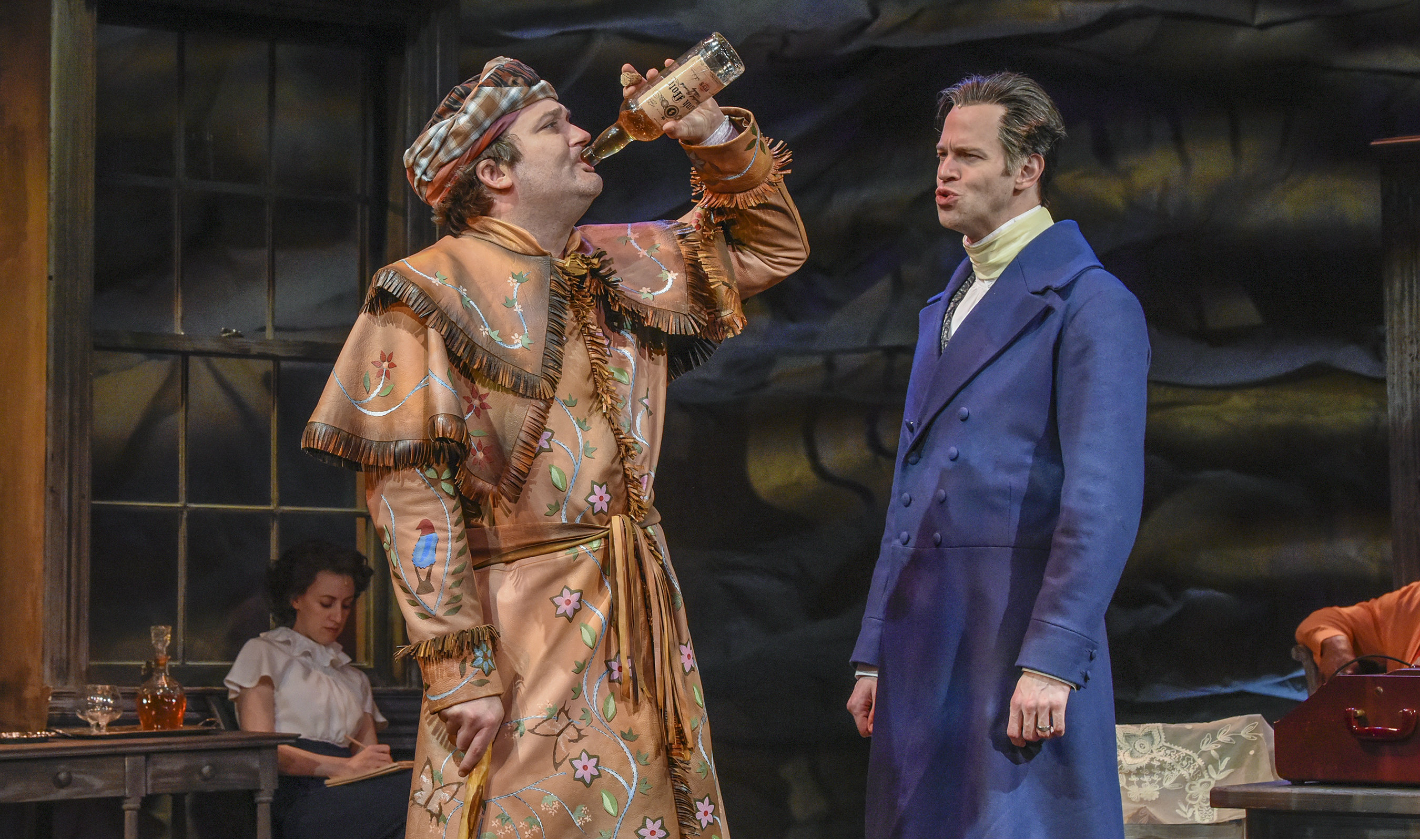 Do the Dew: Kate Wetherhead, Steven Michael Walters as Sam Houston and Alex Organ as James K. Polk in ‘The Trials of Sam Houston’

If the relationship between Hamilton and Houston is the center of the play, it’s perfectly possible for that relationship to have been both rewarding and appalling. That’s one of the galling, painful paradoxes of American slavery: It was awful and it was frequently about family.

But ‘Trials’ leaves us with a heap of broken pieces. Houston was a troubled but valiant man who happened to be an uncaring slave master. Hamilton loved and admired him even as he rightfully resented him  – a fact that, according to ‘Trials,’ he kept secret for decades.

Amidst these puzzles, one actually feels some sympathy for Loeb. Houston’s a fascinating figure, and Loeb’s not a bad writer; he can handle dialogue and character and scenes. It just seems his new play was developed and developed, added to and added to, until it finally stumbled on to stage.

As Houston, Steven Michael Walters is too much the modern, fresh-faced American to convey the grim steeliness of an ambitious, war-hardened frontiersman, the kind of man who could survive bullets and arrows, a devastating public trial, the loss of his wife, his career, his political mentor – and then go on to help fashion a new state, practically a new empire.

But Walters does know how to handle comic drunk scenes and how to sell a climactic speech. As noted, ‘Trials’ has anything like a center (it doesn’t), it lies with Walters together with Robinson as Hamilton. When Robinson briefly plays Andrew Jackson, he also lacks the tight-lipped ruthlessness of such a man. But as the older Jeff Hamilton, he is a wise, gentle, wounded presence.

And almost as an afterthought, ‘Trials’ provides a fine showcase and workout for David Coffee, who plays five different characters, including a delightful turn in drag and, as a bonus, he even looks like the real William Stanbery, the Congressman Houston cudgeled in the street.

Director Moriarty has said that with Frank Lloyd Wright’s layout at the Kalita Humphreys, “when you embrace the architecture and work in harmony with Wright’s ideas, it opens up amazing artistic possibilities.” In this case, that seems to mean having designer Beowulf Boritt completely drape a third of Wright’s stage and its back wall with yards and yards of stiff, crumpled fabric intended to resemble, perhaps, eroded Texas limestone. There’s also a prominent staircase that, Escher-like, goes nowhere. All in all, the set is an ungainly performance space, one that funnels the cast into a cramped front corner with hardly anywhere to go.

But then during two scenes, the show’s one grand visual effect blinks on, then off (the lighting is by Jeff Croiter). Those 20 seconds of a flickering American flag apparently justify the entire set design. It exists for this effect, really.

Those moments are like a big, bright idea – that fails to illuminate much.