The epic stage drama ‘Angels in America’ won the Pulitzer Prize. It’s been turned into an HBO film and an opera. But Tony Kushner’s play was written in the early ‘90s about events in the mid- ‘80s, about the onslaught of AIDS and the Reagan administration’s lack of response to it. I sat down with Art & Seek’s Jerome Weeks to ask – with the Uptown Players reviving ‘Angels in America,’ is the play even still relevant?

JW Justin, asking if ‘Angels in America’ is still relevant is a little ridiculous.

Uptown Players’ ‘Angels in America’ runs through November 20th at the Kalita Humphreys Theater.
JWIt’s like asking, now that Nantucket doesn’t have a whaling industry, why do we care about ‘Moby Dick’? Tony Kushner’s sub-title is “A Gay Fantasia on National Themes.” Just like Herman Melville, he’s aiming for something much bigger than his little era. That was his lens to view American history, American identity, even human questions of power and responsibility. And the Uptown Players production more than justifies our interest.

But ironically, thanks to our president-elect, ‘Angels in America’ couldn’t be more relevant. 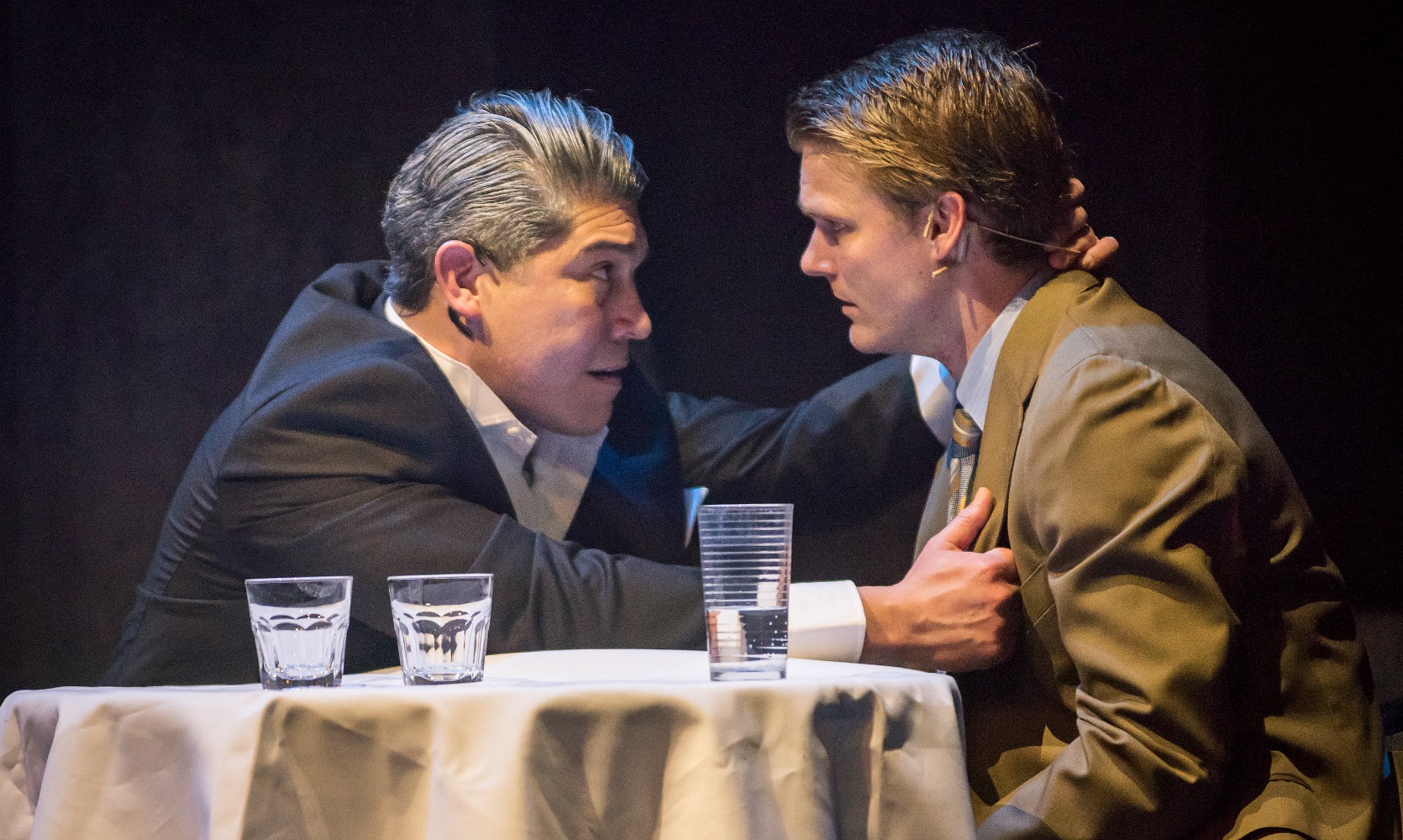 Because of Donald Trump? Is this about whatever his stands might be on gay issues?

JWNot at all. It’s because of Roy Cohn.

You mean the guy who was Senator Joe McCarthy’s hatchet man – waaaay back in the ‘50s – the guy in the McCarthy hearings?

JWRight.  Cohn went on to become perhaps the most dangerous lawyer in New York, a close personal friend of the Reagans. And he was Donald Trump’s mentor, teaching him how to handle the media, especially Rupert Murdoch, and helping him fight the federal charges of racial discrimination that Trump faced in 1973 over his housing developments. That case, by the way, was settled out of court. But Cohn used the law as a weapon to punish people.

So how does Cohn figure in all this?

JW‘Angels in America’ follows two couples – one’s a pair of naive, young Mormons, and Joe, the husband, is up for a job in the Justice Department. Roy Cohn, who’s been mentoring Joe, really needs him there because – and this is true – Cohn was facing disbarment. And he wants Joe to be his ally in Justice to protect him. But Joe refuses; it’s unethical, he says.

Cohn: What do you think this is, Sunday school?

Cohn: This is intestinal is what this is. This is blood red meat. This stinks. This is politics, Joe. The game of being alive. And you think you’re what, above this? Above alive is what? Dead. In the clouds. You’re on earth. Plant a foot and stay awhile.

So Cohn’s a complete bully.

JWNot just a bully. Cohn is the play’s showcase role, all fireworks and acid. Al Pacino played him on HBO. But Cohn should be a snake – both venomous and seductive. You don’t get to be well-connected without some charm. And I think David Lugo, who plays Cohn there, just makes him a thug – a force of nature.

But the other pair in the play is a gay couple: Prior and Louis. Louis can’t deal with the horrors of hospitals or sickness. So he’s utterly guilt-ridden when Prior, whom he loves, has HIV and has developed cancer lesions from Karposi’s sarcoma. This was back when that was a death sentence.

Prior: Lesion number one. Look at it. The wine-dark kiss of the Angel of Death.

Prior: I’m a lesionaire. The Foreign Lesion. The American Lesion!

Prior: Don’t you think I’m handling this well? I’m going to die. Let go of my arm.

Prior: I can’t find a way to spare you, baby. 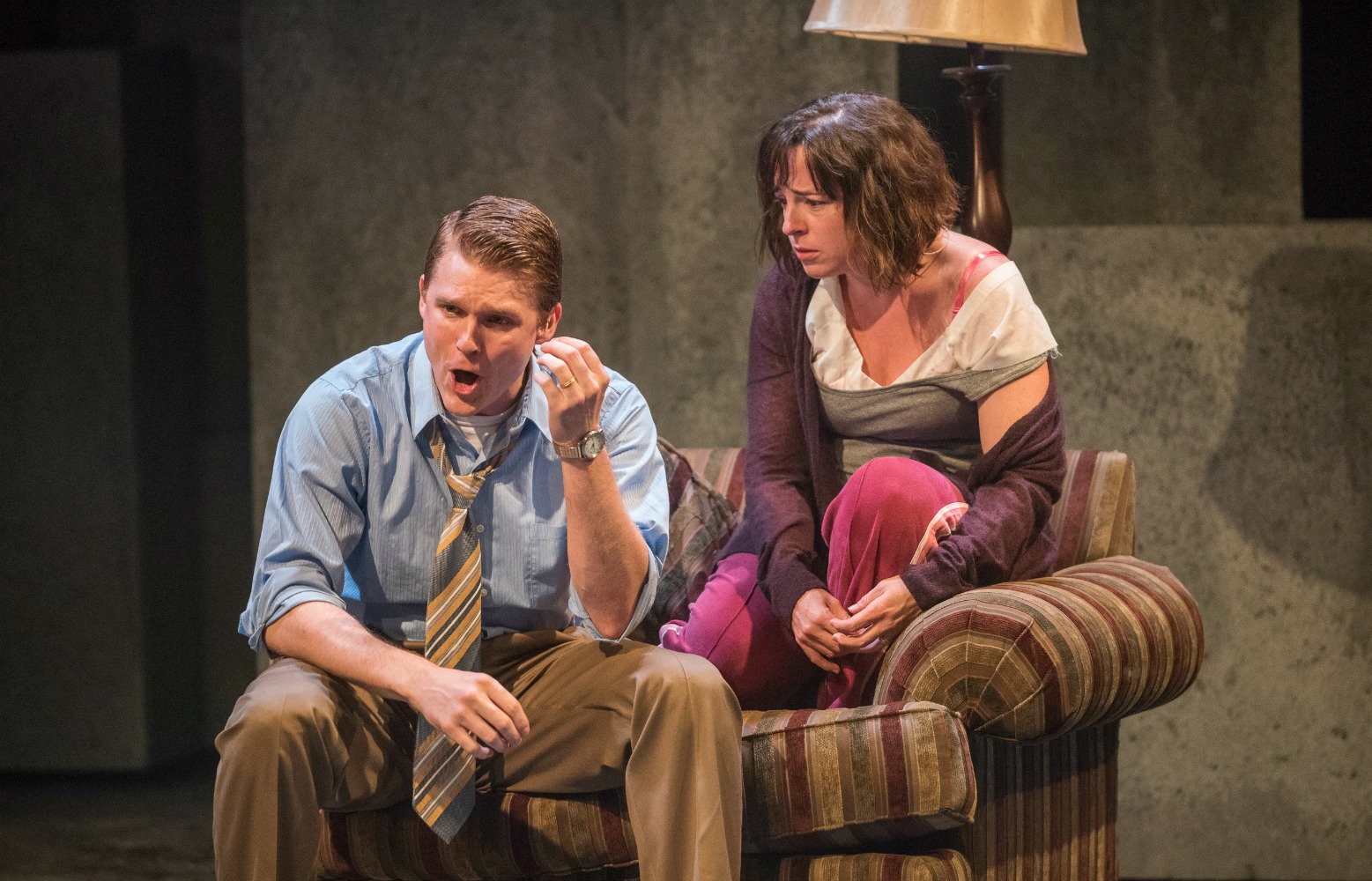 That’s a lot to process, a lot of emotion, the way it pivots from bitter humor to pain.

JWYeah, that’s what Tony Kushner can do. And did I mention, ‘Angels in America’ is extremely funny? Kushner’s not stupid, he knows a three-act play is a lot to sit through, so he delivers quick, sharp humor, particularly from a draq queen played by Walter Lee. The Uptown Players’ productions was directed by Cheryl Denson, and it’s good. At first, I thought the blocky, concrete set from Bart McGeehon was downright ugly. But the way it pivots and splits, it’s like these huge tectonic plates crumbling in America and in these people’s lives. And when he projects images of courthouses and Salt Lake City on those blocks, you get these Cubist images of institutions, whole cities being deconstructed. It became very striking, very evocative.

But it’s the acting that captivates. David Meglino as Louis and Garret Storms as Prior are superb, Meglino, especially, he just inhabits Louis’ tortured soul. Marianne Galloway as Harper, Joe’s wife, is also notable, although at the beginning, I thought she hit the same complaining, desperate note — there was a wanness, a sweet lost quality to Marcia Gay Harden’s performance on Broadway that immediately offset some of Harper’s screaming interrogations of Joe. But when the deadpan comedy kicks in with Harper’s drug-induced fantasies, Galloway really comes into her own. There’s this sad elfin appeal to her.

But the really good news?