The comedy ‘One Man Two Guvnors’ has been a hit in London and on Broadway. Along the way, it even made its lead actor James Corden a star – and launched him into the host chair at ‘The Late Late Show’ on TV. Now the WaterTower Theatre’s presenting the comedy’s area premiere. Local All Things Considered host Justin Martin sat down with Art & Seek’s Jerome Weeks to talk about what, in fact, is a funny but very old play.

JWJustin, let me play you a little music. So who does this sound like? [plays an excerpt from ‘Give It Up Baby’]

It even makes me think of ‘Austin Powers.’ Y’know, ‘Grooovy, baby!’

JWExactly. Basically, the whole swinging-London-in-the-early-‘60s feel. But the song is actually an imitation of that pop style. Composer Grant Olding created a bunch of copycat tunes for the comedy ‘One Man, Two Guvnors’ when playwright Richard Bean developed it at the National Theatre in London five years ago. The show even opens with a skiffle song — skiffle was what the early-early Beatles played, a kind of rhythmic folk-rock, easy for street musicians to perform. A big skiffle hit was ‘Rock Island Line’ — and just to show you how closely Olding echoes these things, ‘One Man’ even has a tune called ‘The Brighton Line’ — because the show is set in Brighton.
‘One Man, Two Guvnors’ at WaterTower Theatre through August 28th.

In any case, they didn’t make the comedy into a musical; the songs are played by a live band on stage to add some of that lively, upbeat spirit of the early British Invasion. Instead, the play is actually an updated version of  the old stage comedy, ‘The Servant of Two Masters’ — Il servitor di due padroni. It was written in 1746 by Carlo Goldoni, one of Italy’s most popular stage writers. 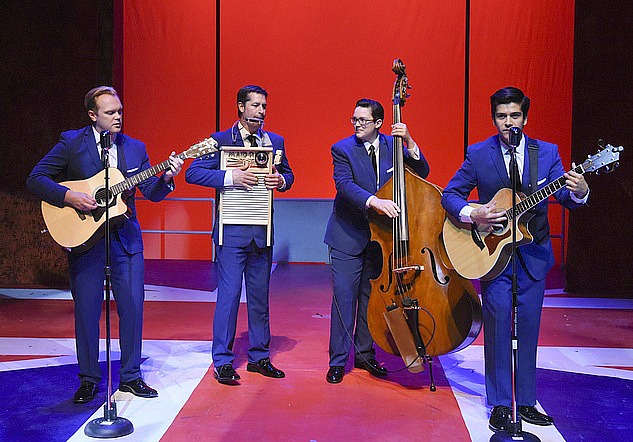 JWIt’s kind of pointless to explain the plot. Ask me why in a minute. Anyway, a hired hand named Francis works for a gangster named Roscoe. Francis doesn’t know Roscoe was murdered because Roscoe’s twin sister has stepped in in disguise. She wants to get money her brother’s owed so she can marry the man she loves. Meanwhile, Francis isn’t getting paid and Francis is hungry, so he hires himself out to another criminal. At any rate, Francis tries to keep these two bosses – his two guvnors – apart but everyone ends up at the same restaurant.

Oh yes. So Jerome, why is it pointless to explain the plot?

JWBecause the plot, as complicated and ridiculous as it gets, really isn’t that important. You don’t laugh at the plot. Carlo Goldoni, the author of the original play? He was working with the very old traditions of the commedia dell’ arte. That was a popular Italian street theater. It uses stock characters — the lecherous old man, the innocent young lover, the conniving servant — and stock situations like sketch comedies. You know, “Oh, no, my wife’s here! Quick! Hide behind this very conveniently placed sofa!” You can find the commedia in everything from Shakespeare’s ‘The Comedy of Errors’ to Rowan & Martin’s ‘Laugh-In’ and a ton of American sitcoms.

Right. So when does the funny stuff happen?

JWI’m getting there. Another early name for the commedia happens to have been commedia all’ improviso. Improvisation. The actors use these old routines as excuses for their own political quips, local references or physical slapstick. They often broke character and just joked directly to the audience. So in this scene, Francis is played by Brian Gonzales. He’s still hungry, but he’s putting the moves on the gangster’s sultry bookkeeper, played by Ashley Puckett Gonzales. Their wisecracking here is typical of the show’s dialogue, and so is Francis’ last line — which he addresses to the audience. 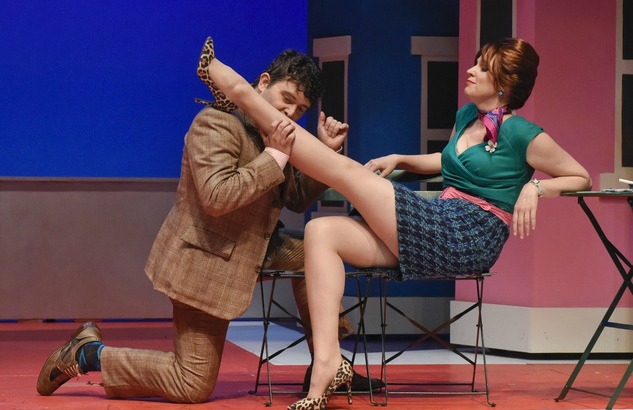 That’s real sharp. That sounds like something out of Monty Python.

JWIt is classic, isn’t it? The WaterTower Theatre production captures that whole spirit of effortless silliness and ‘60s pop style. It’s directed by Terry Martin, and he’s cast this very well. I especially liked Sonny Franks and John-Michael Marrs as the two guvnors and Jeff Colangelo as a feeble old waiter. All in all, it’s a lot of well-done fun.

Of course there’s an ‘except’ with you. Here it comes.

Well, when James Corden played Francis in London and on Broadway, he had a sweetness, an innocence to him. All of his schemes came from desperation – he really WAS starving. And I don’t get hunger or desperation from Brian Gonzales. Gonzales is funny. But from the start, he’s more of a wise guy. He’s not really after the food, he’s after the laughs. So you lose a little of that innocence that’s one reason the whole show is set in the early ‘60s.