During February’s ice storm, 23 of the more than three dozen buildings in Fair Park experienced water damage, including the Cotton Bowl. But the worst to suffer was probably the Hall of State. The Art Deco masterpiece, which was built as a Texas showcase, was flooded all the way down to its basement auditorium

A month after the storm, fans and dehumidifiers were still running in the Hall of State, still drying it out.

The blackouts across Texas during the storm cut the power to Fair Park. So very early on February 17, a single, fire-suppression sprinkler froze in the Hall of State – and burst in the lobby, known as the Hall of Heroes.

“What happened was it sprayed across the Hall of Heroes,” Karl Chiao said. He’s the executive director of the Dallas Historical Society, which is headquartered in the hall. “And then the water pressure forced it to kinda daisy-chain and break the other sprinkler pipes that were up there.”

The East Texas Room before the storm. The G. B. Dealey Library is at the back. Photo: Jerome Weeks 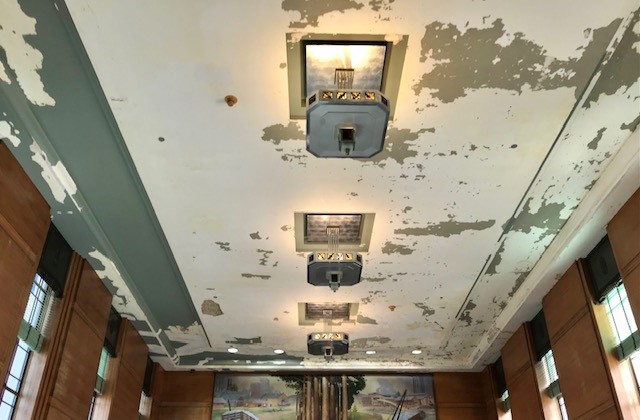 Chiao points to where cascades of water broke chunks of plaster from the ceiling. The wooden walls are streaked – so are the historic murals that were painted in 1936 for the Texas Centennial. The initial estimate to repair all this is more than 3 million dollars.

The price tag’s unfortunate because all this comes after a $14.41 million restoration of the building that was just completed in December. What’s more, everything in the Hall of State, designed by modernist architect Donald Barthelme, Sr., was originally custom-built, hand-made. From the chandeliers and carved doors to the floor mosaics and the display cases — they’re all works of art.

There is a small silver lining in all this, however – the rescue of some rare, fragile, often-overlooked artworks. Much of the attention has been on the very visible damage — flaking plaster, water-stained paneling — or the iconic historic items from the Dallas Historical Society’s collection that got soaked, including John Neeley Bryan’s Bible and Quanah Parker’s leather bag, items that have been flash-dried to save them.

But this morning, three people trundled wood carts into the Great Hall; the carts are designed specifically to transport artworks: Ironically — or fortunately – the storm has triggered a rescue operation, a rescue operation that might have otherwise been delayed.

“Without water damage,” said Lyzanne Gann, “we were thinking they had just sustained corrosion.” 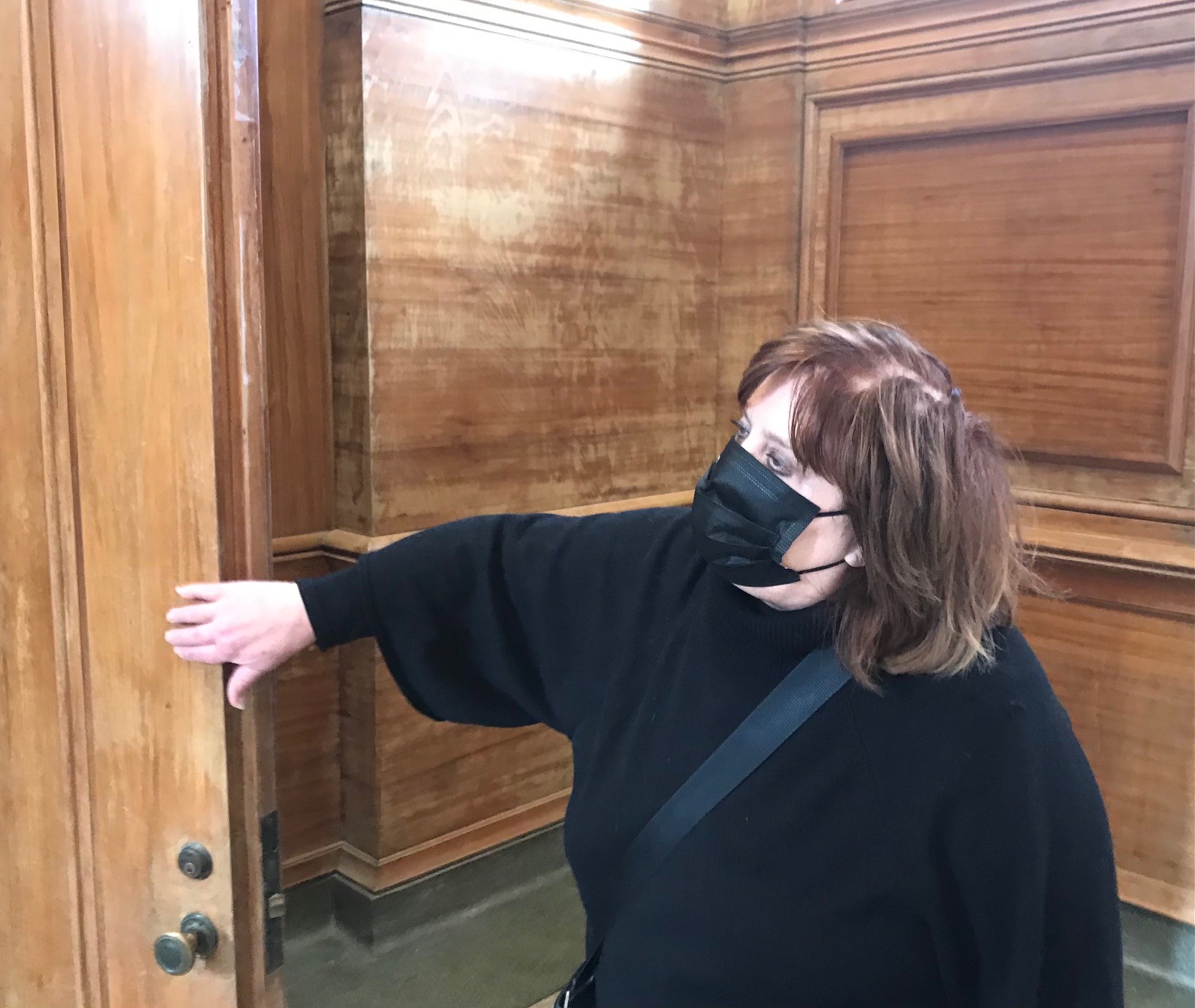 Gann was talking about the 18, large-scale orotones that lined the walls of the East Texas Room, the worst-damaged room in the building. Orotones are glass-plate photographs, and these were made by Polly Smith in 1935. Some had already become visibly spotted, but the idea was to start slowly, conserving one at a time. Then the walls got soaked and all the images were taken out of their built-in frames. Turns out, they need much more work than realized.

“Jobs of this scale,” Gann said, “come along perhaps once or twice in a career of a conservator.”

To gain a sense of the scale and rarity of these orotones, we need to zip through a little art history.

Various experimental types of orotones —  or gold tones — were developed in the late 19th century. But American photographer Edward Curtis’ studio perfected the orotone process around 1918. You’ve probably seen one of his. Arguably, Curtis’ most famous images are orotone portraits of Native Americans. The images are known for their rich bronze and dark brown hues, and a glow that seems to come from inside.

If you’ve seen any of these in a book, though, you haven’t really seen an orotone. Their effect is dependent on the gold pigment that’s used in the image, laid down as an emulsion on back of the front plate of glass. And then there’s the light in the room the orotone is in. Orotones can look as though they have low-watt light bulb gleaming behind them. That’s because an orotone is as much an optical effect as a printed image: Behind the glass photo, they have a metallic reflective surface that bounces the light back through the image on the front plate.

“They are gorgeous,” said Veletta Lill, chair of the Dallas Historical Society. When looking at Polly Smith’s orotones, she said, part of their effect “comes from gold – that’s often what you see when you look at the orotones. And you get the sense of 3D” from the different layers of glass.

But a typical Edward Curtis orotone is around 11 inches by 14, though you can buy reprints that are larger. The orotones at the Hall of State, on the other hand, are almost three times that size. For orotones, Polly Smith’s are huge.

“These are so rare, ” Gann said. “I have never seen an orotone this size in my career.”

And Polly Smith herself was a rarity.

“Polly Smith shot these to market Texas to the world for the Centennial,” said Lill. She was hired as part of the Centennial’s tourism promotion. “So she went on the road with her camera and a little developing room on a truck” — and set out to capture images from all around Texas, projecting it as modern, vast, old-timey, bucolic, bustling.

Smith was 25 years old. In 1935, a female professional photographer was unusual enough, but one driving Texas backroads by herself was pretty much unheard of. What’s more, Smith had previously studied photography with the great Edward Steichen. Now she was climbing into power stations, visiting water holes, talking with sharecroppers.

So why isn’t Smith as well known as similar pioneering photographers of the era — like Gordon Parks or Dorothea Lange?

“They had long careers,” said Lill. “She decided she wanted to do sculpture and she left photography behind. She went back to school.”

And along with the rest of her photography, she left us these 18 glass plates.

Veletta Lill says, Polly Smith’s orotones are part of our shared history in Dallas. On Wednesday, the City Council will consider authorizing $376,000 for the conservation of these golden portraits of Texas from the 1930s.