The Beast. All photos: Jerome Weeks

The DFW Auto Show is at the Kay Bailey Hutchison Convention Center this weekend – it’s the 35th anniversary of the show coming to North Texas – and local All Things Considered host Justin Martin sat down with Art and Seek’s Jerome Weeks to talk about the wide appeal of such shows, ying a car and what distinguishes this particular show — acoustically.

JUSTIN: Jerome, you’re not in the market for a new car, are you? So why’d you visit the DFW Auto Show?

JWIt’s not all about selling cars. Curiosity. Nostalgia – to connect with my youth. My father worked hjs entire career as an engineer at Chrysler. And my brother works in design at GM. This is the 35th anniversary of the DFW Auto Show, which actually shows how relatively recent it is. Growing up in Detroit in the ‘60s and ‘70s, I saw probably a dozen auto shows. Back in the ’50s, GM started the whole ball rolling by renting out ballrooms in hotels like the Waldorf Astoria and hiring whole orchestras for what it called the Motorama. But it wasn’t until the ’80s that the new (more conventional) auto shows started tootling out to cities like Dallas — because that’s when city convention centers got big enough to hold the shows.

JWLike any other noisy, bright, spangly touring trade show, of course — only bigger than most. The auto shows do cater to nostalgia – they have classic car clubs and collectors bring in their models from the ‘50s through ‘70s for the ‘memory lane’ sections– and they certainly cater to adolescent, hormonal fantasy. There’s always a couple million-dollar supercars on hand that just shriek wonderfully useless indulgence – this year, it’s the Pagani Huayra and the Rezvani Beast, which doesn’t even come with a roof or doors. The kind of car for your backyard speed track, which you have to use because the average freeway around here won’t accommodate you hitting 238 miles per hour.

But you’re right, mass-market car sales are still what drive this, even if that isn’t on the mind of the particular attendee. I mean, the show is brought here by the DFW New Car Dealers Association. It’s a giant sales pitch. And the dealers, of course, want to sell a car to just about everyone, which is why there are so many different kinds of cars. But almost as an accidental result, the auto show is a fairly rare cultural event these days.

JWIt’s like the State Fair. It’s one of the few public occasions that actually draws people from – well, I can’t say from every walk of life. It’s a paid, ticketed event and not everyone in America can afford a car. But beyond that, it’s still fairly rare to see this kind of big, diverse crowd in North Texas, all different kinds of folks just … mingling together, sipping cokes and talking cars.

As proof, I met a person who I’ve never seen before at any auto show. A young, Roman Catholic nun. I had to ask her what she was doing there — because I half-expected her to say she was shopping for an SUV for the entire convent or something.

“My name is Sister Josephine Garret. I’m with Sisters of the Holy Family of Nazareth. And I’m here because we’re raffling off a car. And we thought people at the car show might be interested in our 2016 Mazda Miata.” 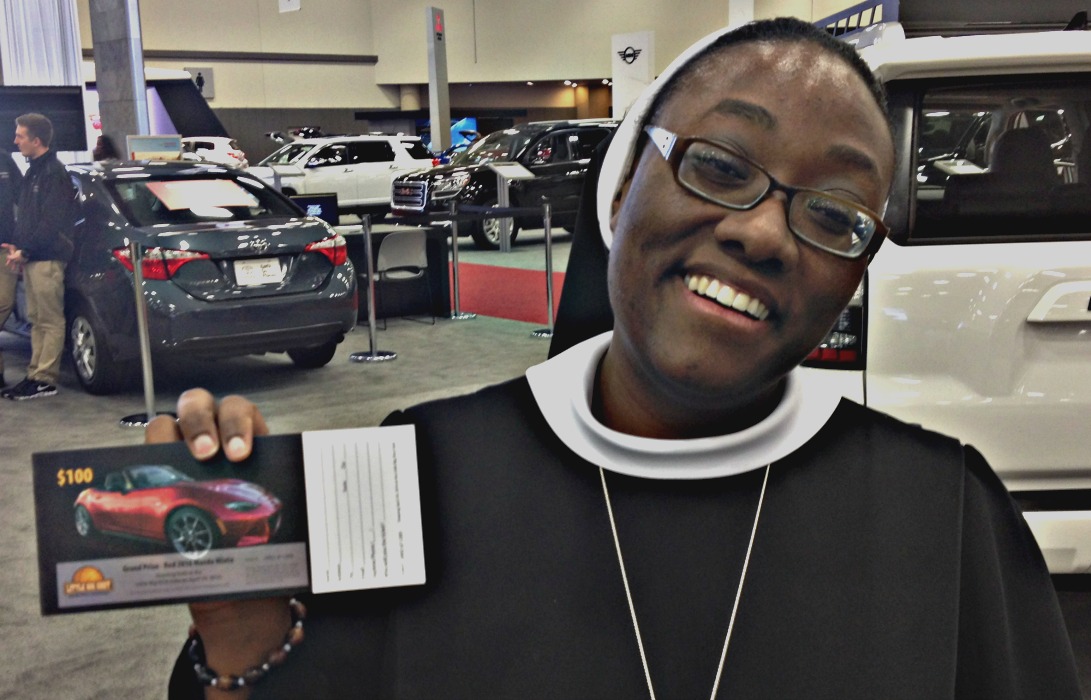 So she was there to sell!

JWYes, basically. A little different sales pitch than what the models on the platforms were giving, but I wished her well.

But what was distinctive about this auto show, what made it a DFW auto show?

JWYou mean besides all the pickups? There were so many rows and rows of Toyota trucks, so many pickups done up with those tough-guy, bolt-on, fender flares, I began to think of them all as Toyota’s new limited edition, The Paramilitary. But that’d probably be a bad PR move, given how infamously popular Toyota trucks have been with terrorist groups.

The fact is I was a little surprised just how much real estate Toyota has. It’s the second-biggest car company in the world, so that shouldn’t be surprising. But VW is the biggest and it didn’t have nearly the same space. And BMW isn’t even here. Then I saw Toyota’s big sign saying, “Hello Texas.” Forehead slap. Of course. Toyota’s building its $300 million North American headquarters in Plano. Naturally, they want to show off. Locally, they’re definitely with the big boys now.

Thinking about that made me think how visual an experience the auto show is – the scale of it, how different companies display their cars, all the big-screen videos going on, and, of course, the cars themselves. So I wonder just how much of that you can convey on radio.

JWTrue. The visual experience is so rich – hard sale, soft sale, any kind of sale — that it’s designed to be overwhelming. But so’s the audio experience. I could have brought back clips from all the pop music, the fanfares, the pitchmen (generally pitchwomen) on echo-y PA systems hawking the new V6 engine and braking systems.

But I decided to bring back something distinctively automotive – in fact, some of the most carefully crafted sounds in the entire auto show: [a thump follows each brand name] A Mazda. A Ford. A Hyundai. A Lexus. Chrysler. Volkswagen. Jaguar. Cadillac. An Alfa. 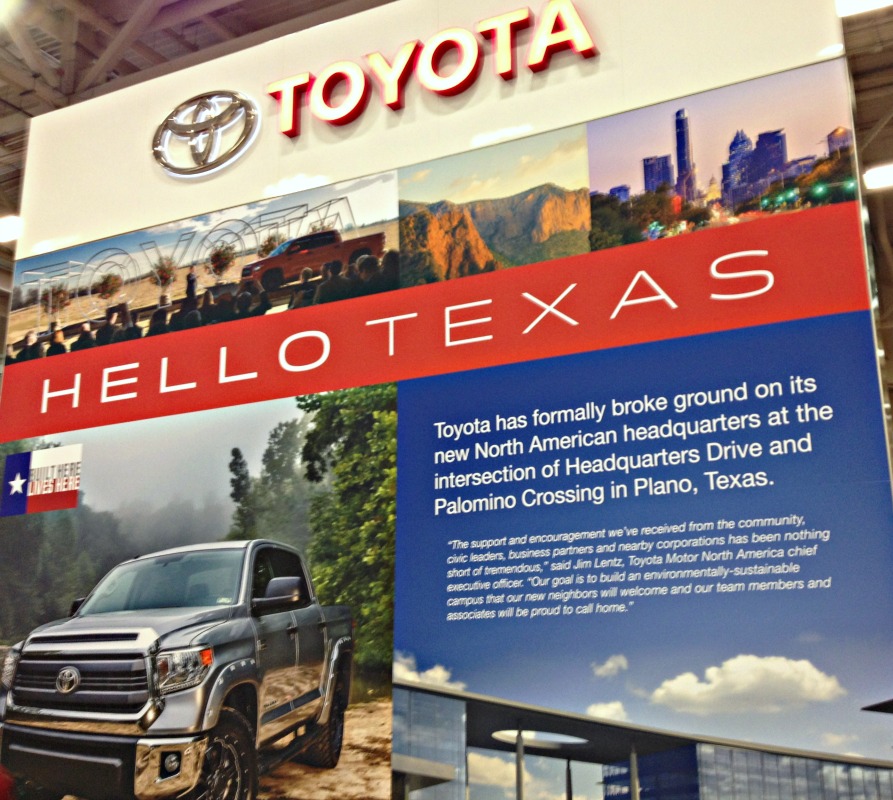 Hello back at ya.

Are you punching these cars?

JWNo, I’m slamming their doors. There are whole teams of staff specialists at firms like Mercedes and Audi who work on nothing but the ‘acoustic descriptors of door closure.’ When we open and close a car door, we intuit hundreds of bits of data: how the handles feel, how the locks latch, how the rubber seals fit, how the weight of the door moves on the hinges. Car makers know that’s often the first sound and the first feel we have of a car. So that combination of sound and touch is a little like the car saying, “Hello,” and giving us a firm handshake. Or maybe “At your service.” Or even waving and saying, “Heeeey there, let’s go for a spin!”

Well, before you drive on out of here, do you have any thoughts on what’s coming up?

JWThe very first Fort Worth Fringe Fest. It’s the first, so I can’t vouch for the overall quality, but there are 16 different performances – theater, dance, comedy, spoken word – all in two days at the Fort Worth Community Arts Center. And the groups I do know – like the musician Ginny Mac and the Dark Circles Contemporary Dance – suggest the festival is starting off strong.