Skip Navigation
Home > ArtandSeek.net > Stage West’s “An Octoroon” Explores Race – And What It Means To Be A Playwright

Branden Jacobs Jenkins’s award-winning Off Broadway play “An Octoroon” features blackface, Br’er Rabbit and a pair of wise-cracking enslaved women.  It makes its North Texas debut at Stage West in Fort Worth.  I caught the show last weekend, and stuck around for the talk-back, led by Stacie McCormick, assistant professor at TCU.

McCormick teaches literature and drama, and her forthcoming book, “A Body Without a Nation: Performing Slavery and Fugitivity in Contemporary Black Drama” looks at the rise in dramas on slavery in theater today. I invited her to join me for our weekly State of the Arts conversation.

You can click above to listen to the conversation that aired on KERA FM. Or read a longer – though still edited – version below.

Branden Jacobs-Jenkins’ play, “An Octoroon” is based on another play called, “The Octoroon”. Can you explain the titles?

So Branden Jacobs-Jenkins is basing his play on Dion Boucicault’s 1859 play, “The Octoroon”, which dramatizes this antebellum romance between a mixed-raced woman and a white man. This is all happening as his family wealth is collapsing. 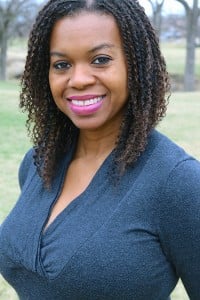 “An Octoroon” at Stage West through  Details.

narrative, but it’s inflected with all these modern-day concerns and issues that continue to resonate in our society.

Why is the original play significant?

The original play is significant because, in many ways, Boucicault was tapping into a cultural zeitgeist around the ending of slavery. His play comes out in 1859 and soon after, we get all these uprisings – John Brown’s raid on Harpers Ferry – as well as the Civil War. So in many ways, the play was trying to tap into the cultural sentiments at the time where slavery was at an extreme debate. Issues of identity and American-ness were in contest because of these racially ambiguous, enslaved people who the country didn’t know what to do with. So that created a crisis of identity for Americans that Boucicault then dramatizes.

And it was wildly popular.

It was, it was. It was probably the second most popular antebellum play about slavery after “Uncle Tom’s Cabin.”

And yet, I think it would seem to modern people to be truly over-the-top because it’s a melodrama. It also treats race in a way that would make a modern audience uncomfortable. So why would Jacobs-Jenkins re-stage this?

I think Jacobs-Jenkins takes on the challenge of re-staging this because he was interested in the craft that Boucicault was engaged in. Boucicault uses all of these racial signifiers, [like] black face, red face. He dramatizes all of these racial tensions. And I think Jacobs-Jenkins was interested, in his own way, in exploring the way race is problematically configured on the contemporary stage.

So I don’t know that Jacobs-Jenkins was looking to have a conversation about the legacy of slavery, just that this play offers it. It then creates something very interesting, because slavery is still very present and these issues of race are still very present.

But Jacobs-Jenkins seems to be having two conversations. One about the legacies of racial representation and the problems with that in the American stage, alongside how these histories converge at the same time. So how the history of slavery informs the way we understand race today. It becomes indirect engagement, if you will, with slavery, as he’s interrogating race and as he’s interrogating theatrical practice historically. 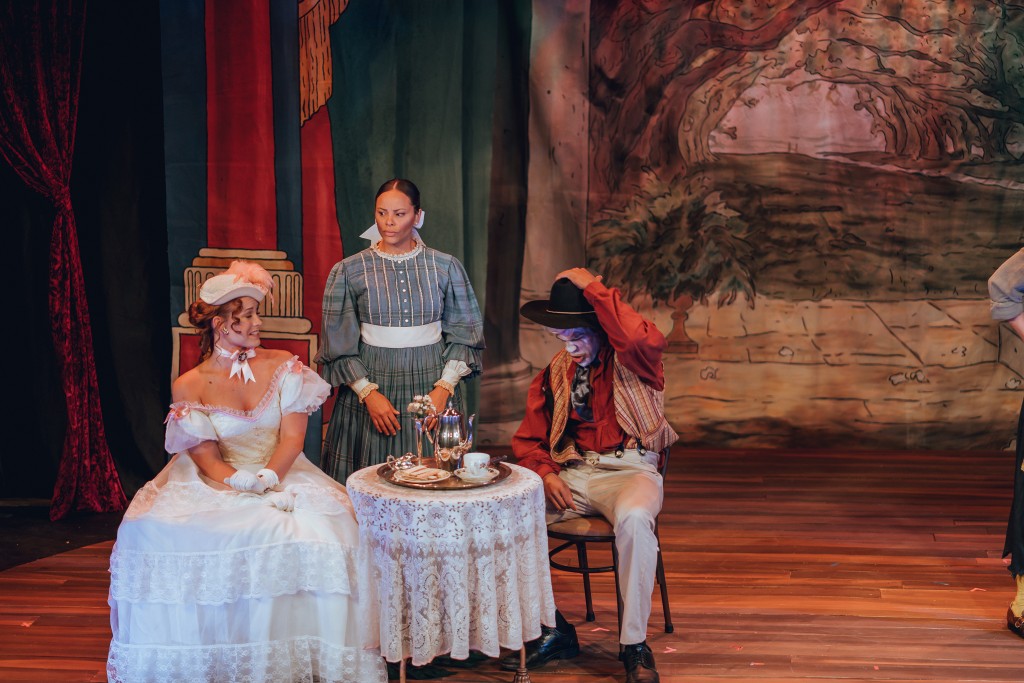 He is a character in the play and so is Boucicault, the original playwright.

We talk about taking down the fourth wall in theater. He immediately uses his character, BJJ, as a reference to him,  immediately [letting the audience] know that they’re at a show. Automatically, we’re taken out of this fanciful context and put into very intentional space. It feels very Brechtian.

He’s doing something very radical and interesting, calling attention to the writers behind the dramas we see, and the things they are concerned with.

The male actors in the play are in blackface, in whiteface, in redface.

It’s so interesting because  Jacobs-Jenkins only has the male actors in the makeup whereas the female actresses are not. So you do have to ask, why that choice? Because it does seem a very stark contrast. In many ways, satire can be a masculine tradition, and I don’t know if Jacobs-Jenkins is reproducing that, that male actors are getting to do this experimental thing.

But at the same time, I think it’s interesting the way he stages the other female characters.  Minnie and Dido, two enslaved women, weren’t very vocal in Dion Boucicault’s play. They only had a few lines. In this play, they have a very large role. That’s perhaps the most significant revision.

The play makes us laugh at stereotypes from the 19th century and then Jacobs-Jenkins twist them in a way that makes us think about our life today. Minnie and Dido, both wise-cracking enslaved women, are two characters in the play that really makes me think about that.

I think Minnie and Dido are, in some ways, the most consequential characters of the play. It’s not only because they call attention to the lunacy of slavery. They are calling attention this institution that is configured in a way that’s unrealistic to maintain; that it’s not in concert with the way we understand humanity, and it’s almost a parallel universe, if you will.

They joke about things like rape, which is hard to hear, and those jokes are a part of what makes this play controversial. Because you have to ask, is it OK to laugh at these things?

But also at the end, Dido laments that the main character, Zoe, the octoroon, refers to Dido as her mammy. So Dido’s still trying to carve out her own identity as separate from this historical figure that has basically been how black woman are perceived, and have been perceived, in terms of their mothering, across time. So there’s a lot of contradiction that they embody. They’re the two characters that we have to sit with the longest to really process. That’s very intriguing to me as an exercise. How have black women navigated this history? What did they have to do to survive in the time of enslavement? How do black women still bear the burdens of those legacies today? So those are questions I think the play raises.

I think at the core, it is about identity. It’s about the main character, BJJ,  and his freedom, to be something else other than an essentialized idea of a “black playwright.”  He doesn’t want to be contextualized or boxed in. Then, he takes on a kind of play on that identity: we start the play with him lamenting being imprisoned by these stereotypes. When he plays those opposite characters, who are both white men, it becomes a space for him to expand himself and actually engage other possibilities for how he’s seen, through these two very opposite figures.

How did you come to this work?

I was actually in New York when the play premiered. I heard all this buzz about “An Octoroon” and admittedly, I had never read Dion Boucicault’s play, “The Octoroon.” I was immediately taken by the title, by the way Jacobs-Jenkins changes the article from “the” to “an,” as to suggest that there is no definitive experience of a black person. Just one of many. So I came to play hoping to learn more about what he was trying to do. When I saw it and read it, it really captivated me and that was in 2014, and here we are in 2018. I think that speaks to the resonance of the play, the fact that it’s continuing to be shown and enjoyed by audiences. He’s bringing us into new cultural conversations that we’ve had in the background. He’s bringing them to the forefront. 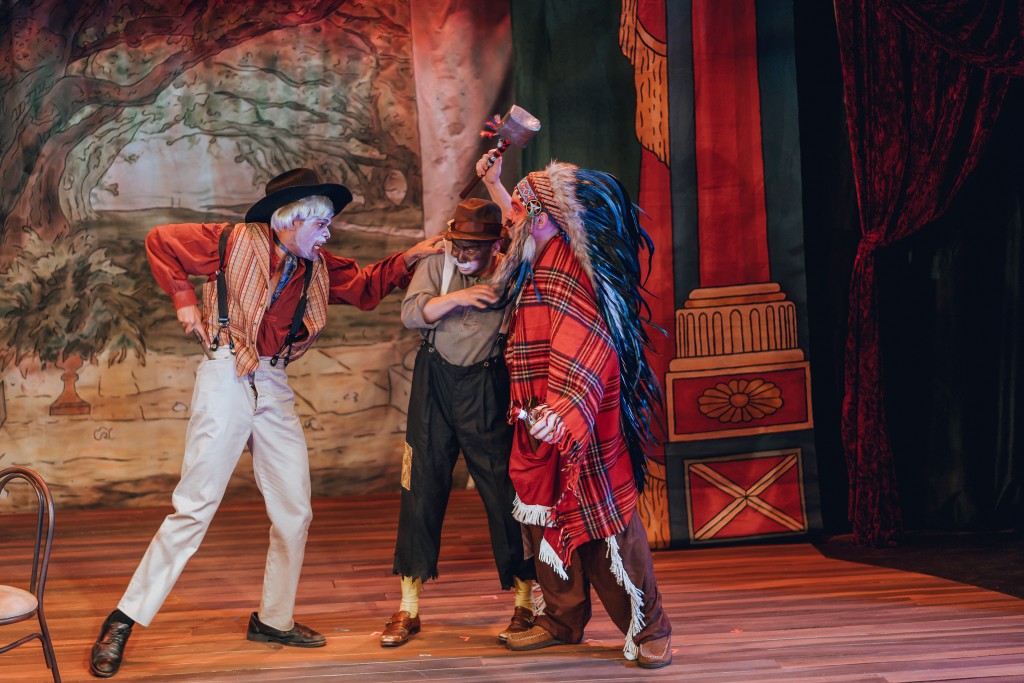