The State Fair of Texas opened last weekend. And as much as we’ve missed corny dogs, Midway rides and Big Tex, these past two years,  believe it or not, there was another event at Fair Park that was met with even more excitement. It was the 1936 Centennial Exposition —  a nearly six-month party celebrating the 100th anniversary of Texas’s independence from Mexico.

In preparation for this big bash more than 50 buildings were constructed, transforming Fair Park into the Art Deco wonderland that we all know and love.

The crown jewel of the 1936 Texas Centennial building boom was the Hall of State, a grand showplace designed to shine a very bright spotlight on Texas history and culture.

We know you’re excited to be back on the fairgrounds, but before you go ride the Texas Star or grab a turkey leg, you need to explore this spectacular building and discover some of the hidden details that make it one of a kind.

Here are six easily overlooked artistic treasures at the Hall of State that you’re going to love discovering. 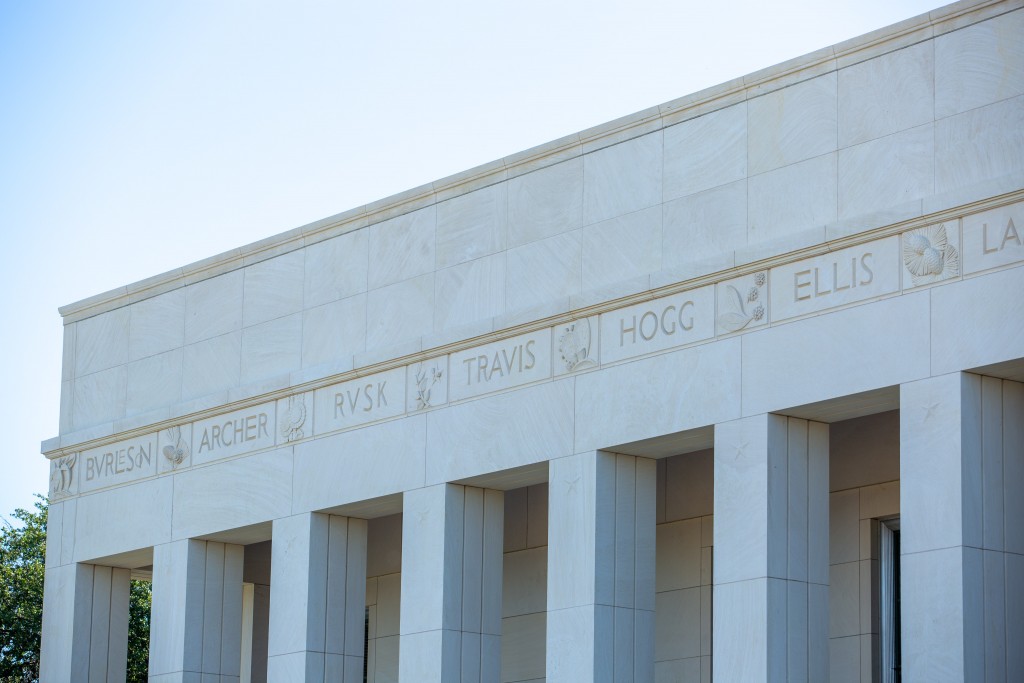 Architect Donald Barthlme found a way to get his name on the Hall of State. Photo: Keren Carrión

1. The Architect’s Name Is Hidden In Plain Sight

Donald Barthelme was the head architect for the Hall of State, but somehow his name was left off the bronze plaque near the front entrance. Undeterred, Barthelme found a very creative way to get his name on the building.

“If you look up along the top of the building along the frieze you’ll see the names of 55 prominent Texans of the past,” Author and Texas history scholar Steven Butler said. “Going from left to right, if you take the first letter of each of those names — Burleson, Archer, Rusk, Travis, Hogg, Ellis, Lamar and Milam — you’ll see that they spell out ‘Barthelm.’ It’s suppose to have another E on the end, but he didn’t have another name that began with E, so he had to stop one letter short.” 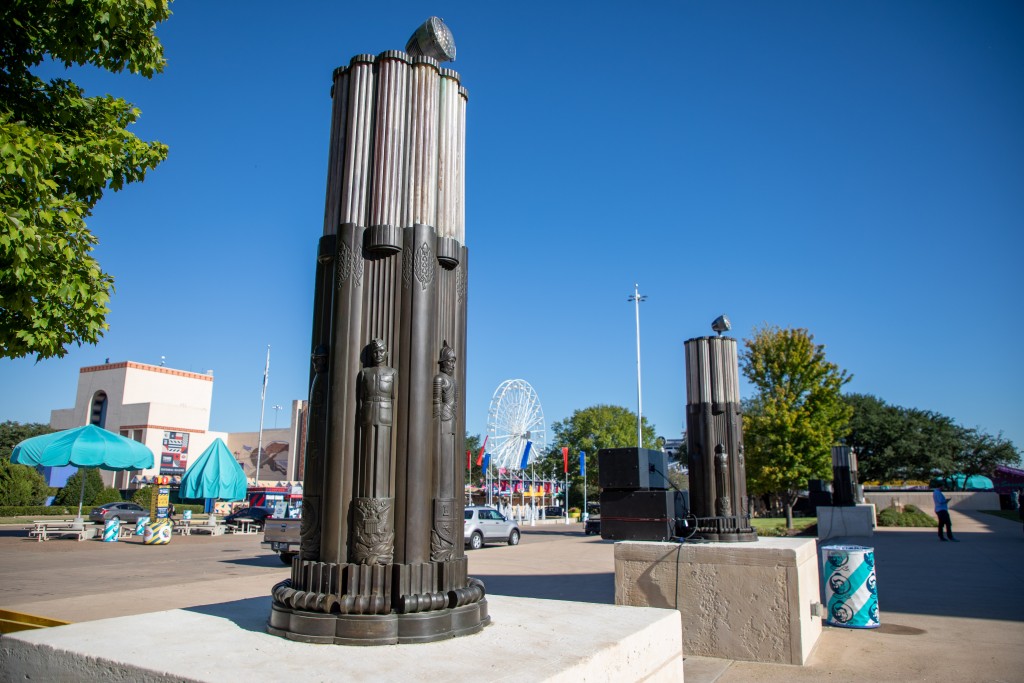 At the foot of the Hall of State Terrace, are lamp-posts which salute the Texas under Six Flags. Photo: Keren Carrión

2. Figures That Salute The Six Flags Of Texas

In the front of the building on either side of the steps sit two large bronze light posts on limestone blocks. If you look closely you’ll see figures that represent the six flags of Texas surrounding the posts.

“A lot of people don’t notice them. They’re not very big, so it’s easy to miss them,” Butler said. “There’s a Spanish Conquistador, a French explorer, a Mexican officer, a frontiersman with a coonskin cap that looks a bit like Davy Crockett, a Confederate colonel and finally, a World War I American soldier. World War II hadn’t happened yet, so they have a figure wearing the uniform [that was] current around 1936.” 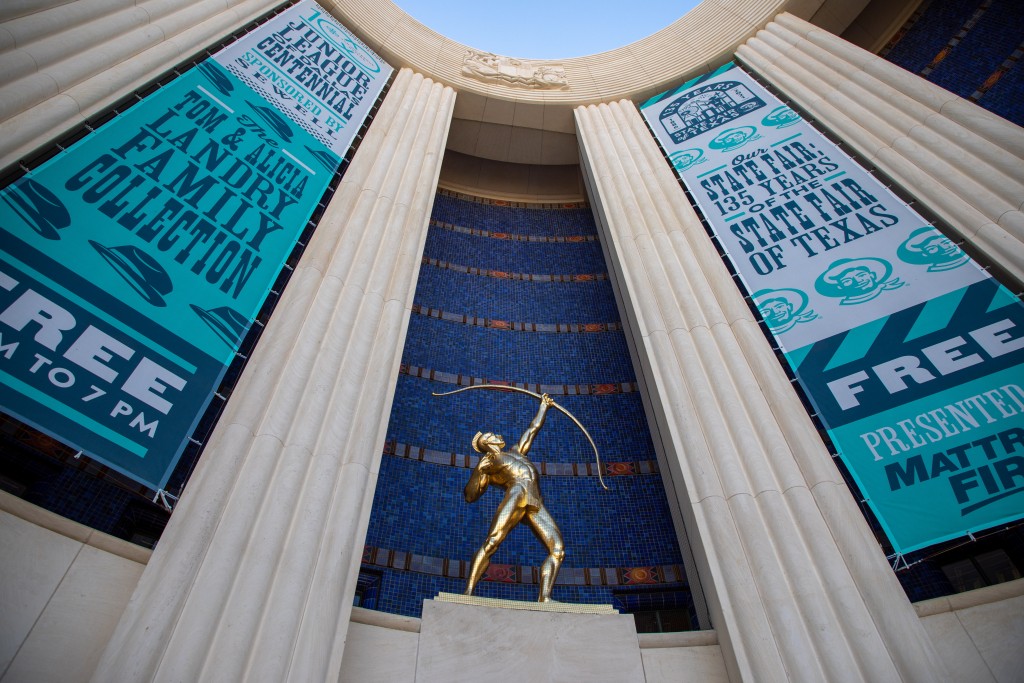 High on the building, the Tejas Warrior points his bow at the Symbolic Seal of Texas
Photo: Keren Carrión

3. Look Up!  The Warrior’s Bow Is Pointing At Something 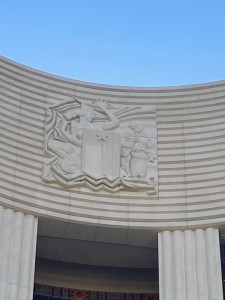 Detail of the Symbolic Seal of Texas. Photo: Therese Powell

The most prominent piece of art on the exterior of the building is the gold Tejas Warrior statue by Dallas artist Allie Victoria Tennant. The warrior holds aloft an arrowless bow that represents peace.

While your eye is drawn to him you might not notice his bow is pointed at a 3-D relief at the very top of the building. The carving called “The Symbolic Seal of Texas” was designed by Donald Barthelme and sculpted by local artist Henry Lee Gibson. It features a female figure known as the Lady of Texas who’s holding a shield bearing the Texas flag. Her arm is stretched upward and she’s holding fire in her hand that represents the spirit of patriotism.

On her right is an owl, which represents wisdom. It’s perched on a key which is symbolic of prosperity and progress. Pecan leaves from the official state tree decorate the background. 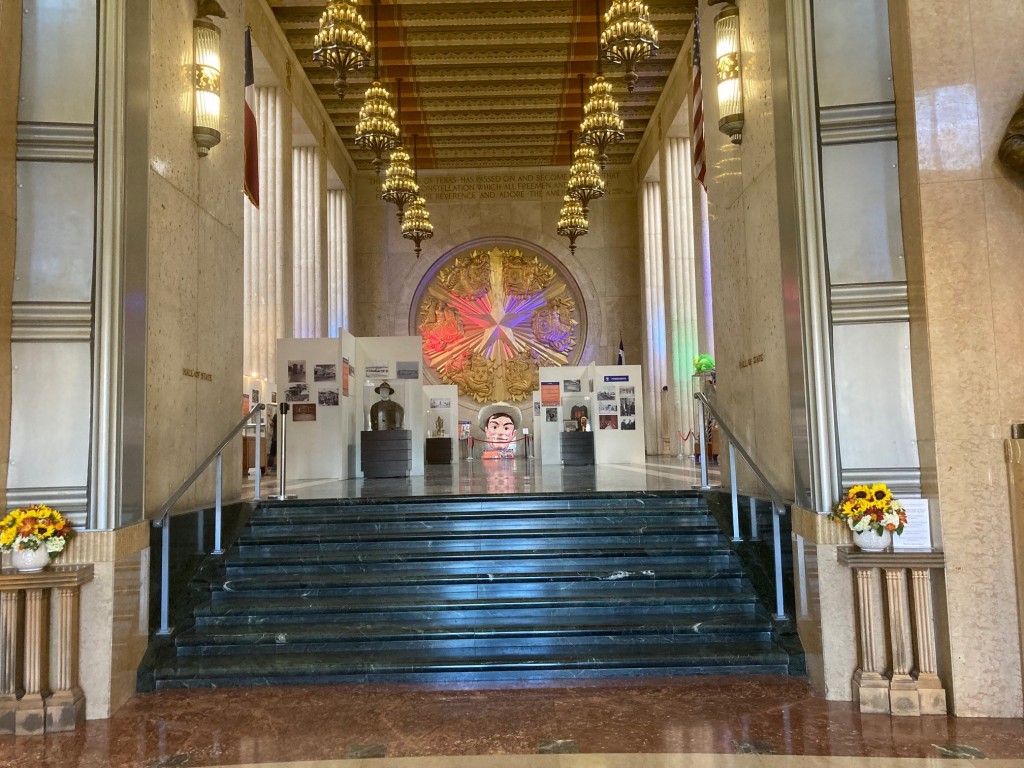 Head up the green marble steps into the Great Hall. Photo: Therese Powell

4. Find The Native Animals Inside the Great Hall 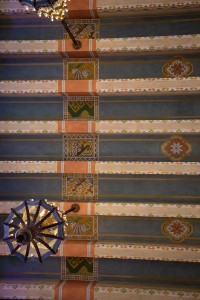 The ceiling in the Great Hall looks like a woven southwestern-style blanket. Photo: Keren Carrión

Open the bronze doors of the Hall of State and the first thing you’ll notice when you step inside the Great Hall is the gigantic golden medallion on the back wall.

“The space feels important and magnificent. As a child I always imagined that if there was a Wizard of Oz, this is the place he lived,” Butler said. “It’s a feast for the eyes because everything in there is decorative and symbolic in some way. There’s not much that was done with no thought behind it.”

Your eye is certainly drawn to the magnificence of the Hall, so much so that you might walk right by all the native wildlife.

Look up, and painted into the rafters you’ll see hand-stenciled representations of armadillos, roadrunners and rattlesnakes. Yale University artist George Davidson painted them in an Aztec style. The effect gives the ceiling the look of a woven southwest-style carpet. The brown, green and blue colors symbolize the earth, the sea and the sky. 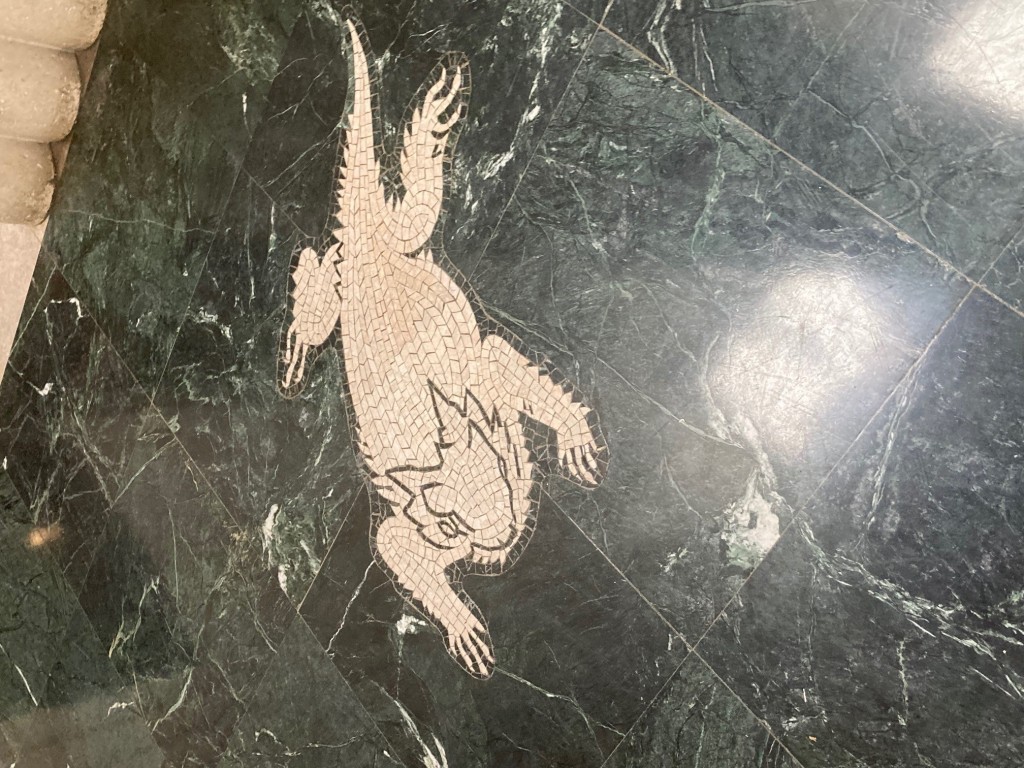 There are 12 Texas animals inlaid into the floor in the Great Hall at the Hall of State. Photo: Therese Powell

Look down, and inlaid into the green marble floors and you’ll spy mosaics of native Texas wildlife. Walk along each side of the hall and there are 12 animals in all — an armadillo, a horned toad, a rattlesnake, a fish, a jackrabbit, an alligator, an eagle, a javalina and a wild turkey. 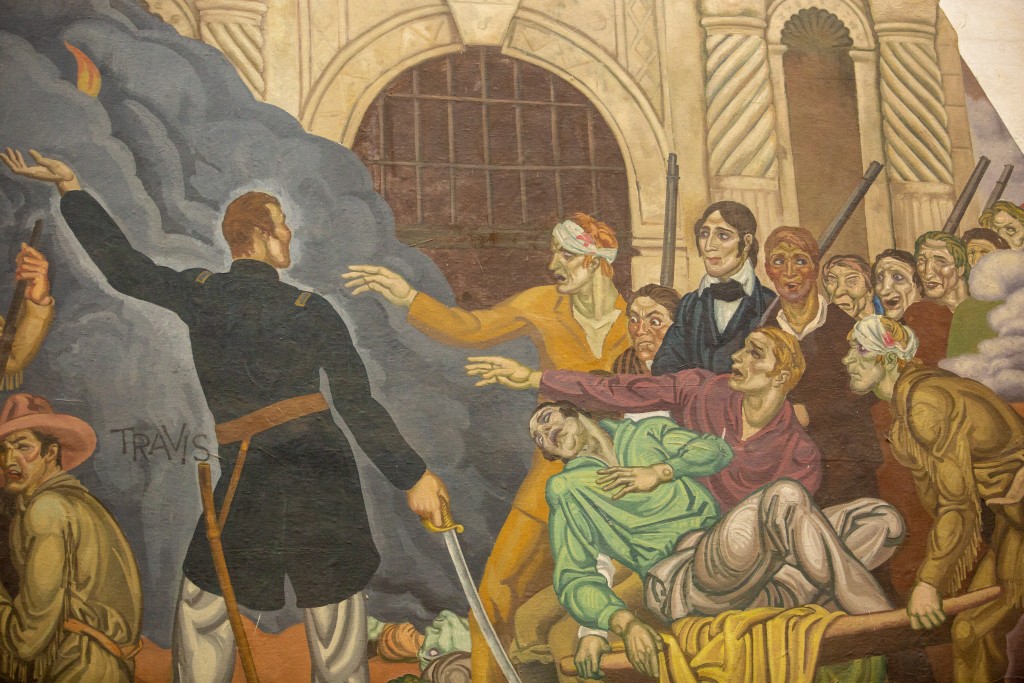 It might surprise you to learn which figure in this painting is Davy Crockett. Photo: Keren Carrión

5. A Case Of Mistaken Identity?

Along the Great Hall’s North and South walls are huge murals by Eugene Savage and a team of artists who assisted him. The paintings are nearly 3-stories high and depict the history of Texas from the 1500s through 1936.

The murals are loaded with details and of course symbolism, but one tiny nuance of Texas history is slightly off. If you look at the center scene on the North wall you’ll see the events surrounding the fall of the Alamo. All of the major figures seem evident to everyone who took Texas History in middle school — General Travis with his sword drawn, Colonel Bowie wounded on a cot and James Butler Bonham, shown carrying Bowie’s cot. But what about Davy Crockett?

“It’s very difficult for most people to determine which one of the figures in the painting is Davy Crockett,” Butler said. “Most people think it’s the man in buckskins reaching out to Colonel Travis. But in fact, Davy Crockett is the man standing next to him. He’s the guy wearing a black frock coat, a starched collar and tie.”

As the story goes, Savage, a New Yorker, did not have a broad knowledge of Texas history or Crockett’s frontier persona. When he painted the Texas hero in the Alamo scene he referenced a portrait of Crockett painted while he was in Washington as a Congressman. This explains why the famous frontiersman is decidedly overdressed for the siege and of course, missing his signature coonskin cap.

6. Last Wishes Of A Fallen Hero 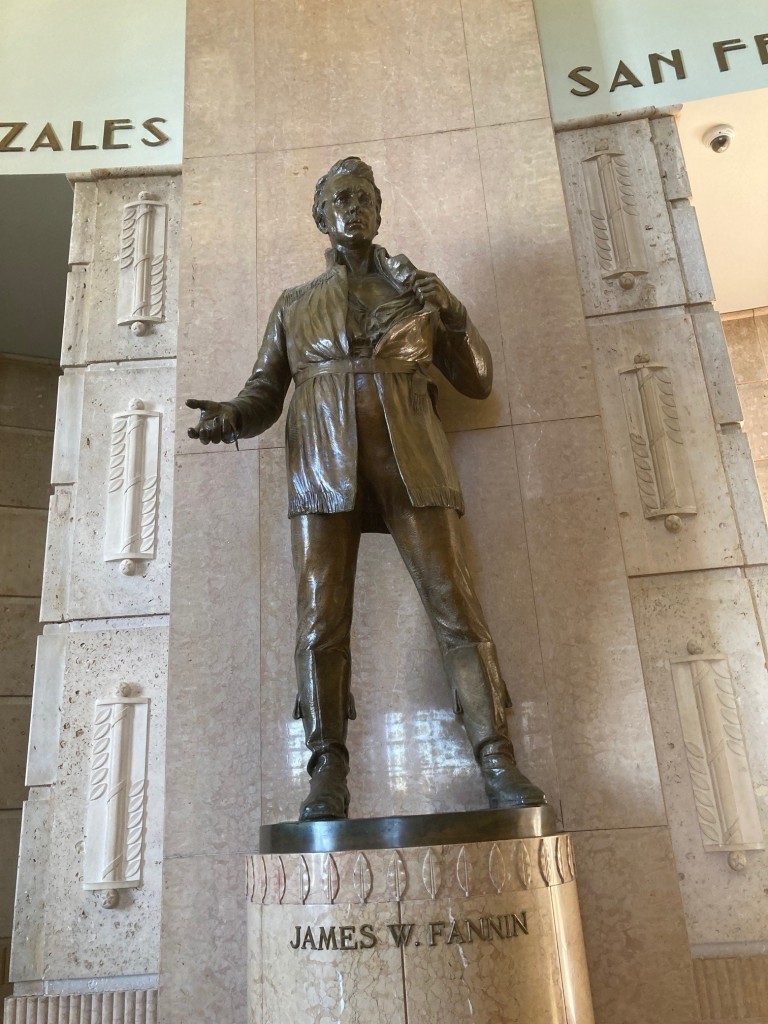 Located in the foyer of the Hall of State is the Hall of Heroes. This space features six bronze statues of individuals who helped create the Republic of Texas: William Travis, Thomas Jefferson Rusk, Sam Houston, Stephen F. Austin, Mirabeau Lamar and James Fannin. Of the six figures only Fannin’s statue tells the story of his final wishes.

Italian-born artist Pompeo Coppini depicted Fannin with his right hand extended and holding a watch. In his left hand, he’s pulling the top of his collar away.

“Fannin commanded the doomed Texian troops at Goliad,” Buter explained. “And the story goes, just before he was to be executed, he asked the Mexicans to shoot him in the heart and to give his watch to his wife as a memento. Unfortunately, they did neither. Fannin was shot in the head and the watch was pocketed by the Mexican commander.”

The watch was eventually returned and is now part of the Dallas Historical Society’s collection.

The Hall of State is open now for you to enjoy during the State Fair of Texas. But if you prefer to skip the crowds, you don’t have to come during the fair. Fair Park is a Dallas City Park that’s open to visitors year-round. In addition to these gems in the Hall of State, there is so much public art to admire, beautiful lawns and ponds perfect for picnics, museums — and lots and lots of history.