In April, three Dallas artists flew to a mountain village in Sicily to paint murals. The plan was to celebrate some of the town’s fading culture. Yet the entire, elaborate project started with an offhand remark. This State of the Arts is the second part of a two-part report from Jerome Weeks on how the town of Prizzi [PRIT-ZEE] was helped by a Dallas psychiatrist.

About a year ago, Dr. David Atkinson was eating at the Yucatan Taco Stand on lower Greenville with a friend, 28-year-old painter Maria Haag.

“And I just mentioned how much I loved painting murals,” Haag recalls. “And he said, ‘You know what, there’s this town in Sicily, I think it could use some murals.’ I did not believe it would happen.”

Less than a year later, it did. The 40-year-old Atkinson is a Dallas psychiatrist with UT-Southwestern. He’s been visiting Italy since college when he first went to Rome. Two years ago, he stayed in a mountain-top village called Prizzi – actually, he drove up in a fog and ended up in the middle of il Ballo dei Diavoli, the ‘Dance of the Devils,’ the town’s famous Easter festival about Death. Death himself appears, exulting in Jesus’ crucifixion and, along with his henchmen devils, tries to prevent Jesus from reuniting with his mother Mary. The whole shebang involves music, parades up and down Prizzi’s tight, twisty, ancient streets, children in masks demanding money as if it were Halloween and, in general, what Atkinson describes as a ‘day-long drunken dance party.’ Funny – he felt immediately welcome. In fact, these days, Atkinson has more than 300 Facebook friends – from a town of 5000 people.

But Prizzi is suffering because it’s isolated on its mountaintop and because Sicily’s economy is bad. The official unemployment rate is 24 percent, while unofficially, for people 25 or younger, it’s double that. Stories have appeared for years – the next European Union member that may fail its loan obligations may well be Italy, and Sicily is where the failure would start. All of which is why young people are leaving Prizzi for jobs elsewhere. 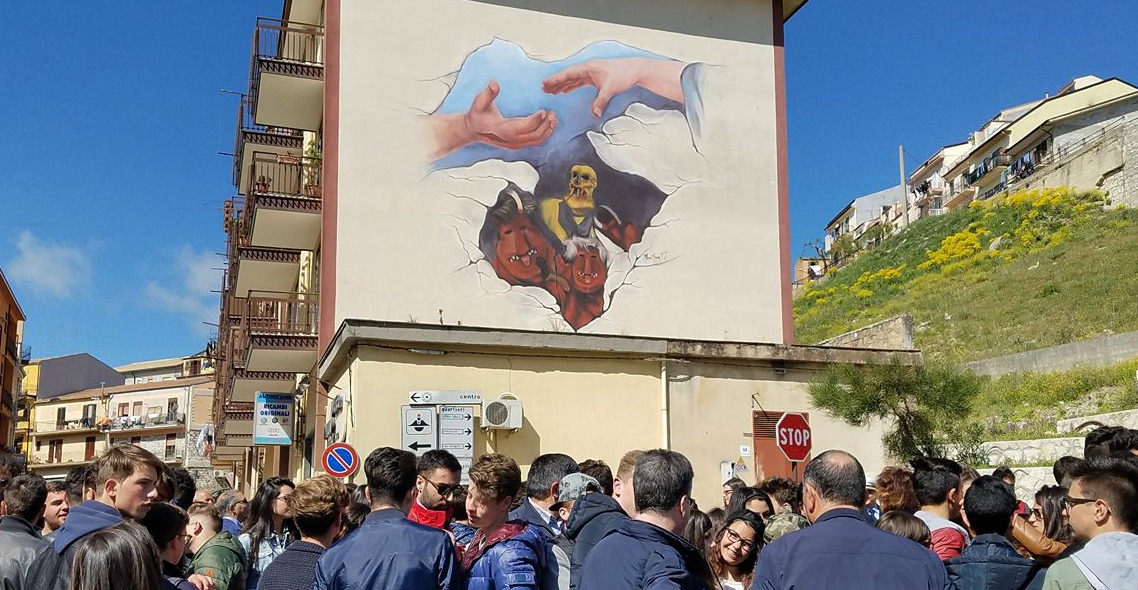 The official unveiling of Maria Haag’s mural celebrating the town’s Easter festival, ‘The Dance of the Devils,’ which involves Death (in yellow) and his hellish minions trying to prevent Jesus from reuniting with the Virgin Mary (the two hands).

But in addition to its open-hearted people, its stunning scenery and its food, the town does have a few, older murals. And Haag’s remark about painting led Atkinson to think, maybe creating more murals might help people appreciate Prizzi more. And he wanted to do something to help the town.

“I actually went to the mayor’s office with three plans for things I could do to give back to Sicily,” he says, “but the mural idea was the one that he really jumped on.”

Mayor Luigi Vallone was so enthusiastic about the plan, he even agreed to Haag’s suggestion to bring along another Dallas artist, Olivia Cole. This led Atkinson to approach Frank Campagna. The Dallas painter’s best known for his many murals in Deep Ellum. Back in 2012, Atkinson bought a painting by Campagna at Art Conspiracy, the charity art auction.

Seeing the painting, Atkinson recalls, “the emotion of grief was so powerful I couldn’t take my eyes off of it. As I walked out of ArtCon, someone said, ‘That’s an amazing piece you bought.” I agreed, and they asked if I understood what it was. I admitted, no, I didn’t. That’s a painting, she said that Frank did of his son who committed suicide on New Year’s Eve. And as a psychiatrist, suicide prevention is our number one job. And I realized quickly that’s why this painting spoke to me.”

The men had never met. But Atkinson emailed Campagna about his Prizzi plan. 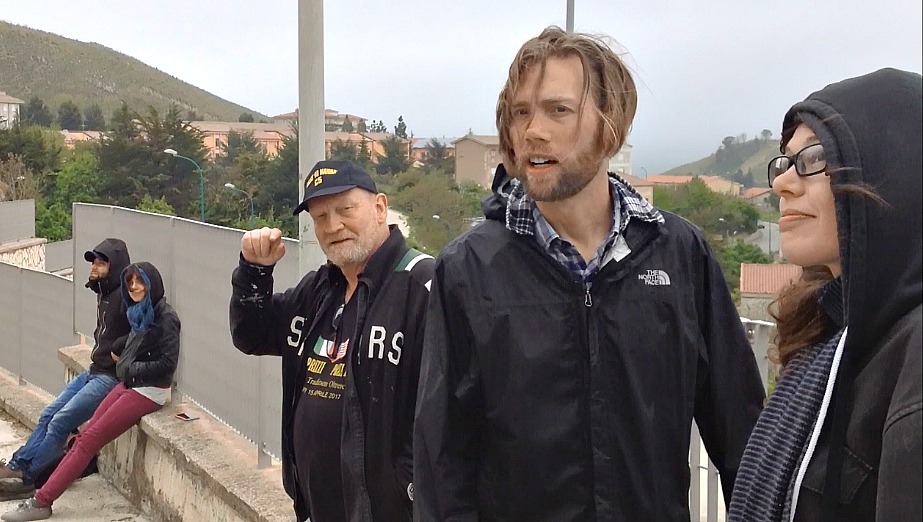 “I thought it was a scam,” says Campagna. “I thought he might as well be a Nigerian prince that wants me to give him my bank account number so he can transfer five million dollars.”

But once Atkinson told Campagna about buying the portrait of his son, about his own work with troubled teens, Campagna signed on. He says simply, “I was his guy.”

In January, another layer of complexity was added to the project by another chance encounter. Atkinson learned his alma mater, the University of Dallas, was presenting a workshop by an Italian documentary filmmaker named Luca Vullo. Vullo arrived early.

“The room was closed,” Vullo recalls, “like all the lights are out. But there was a guy with a laptop there, and it was Dave. And the teacher say, ‘Excuse me, the workshop is in two hours.’ But Dave say, ‘Yes, but I’m here just to know Luca Vullo!’” — and Vullo laughs.

Eventually, Atkinson and Vullo agreed that Vullo would make a short, 20-to-25 minute documentary about the murals, to help publicize the need to preserve Sicily’s villages and their way of life. So Atkinson brought Vullo and his film crew to Prizzi. 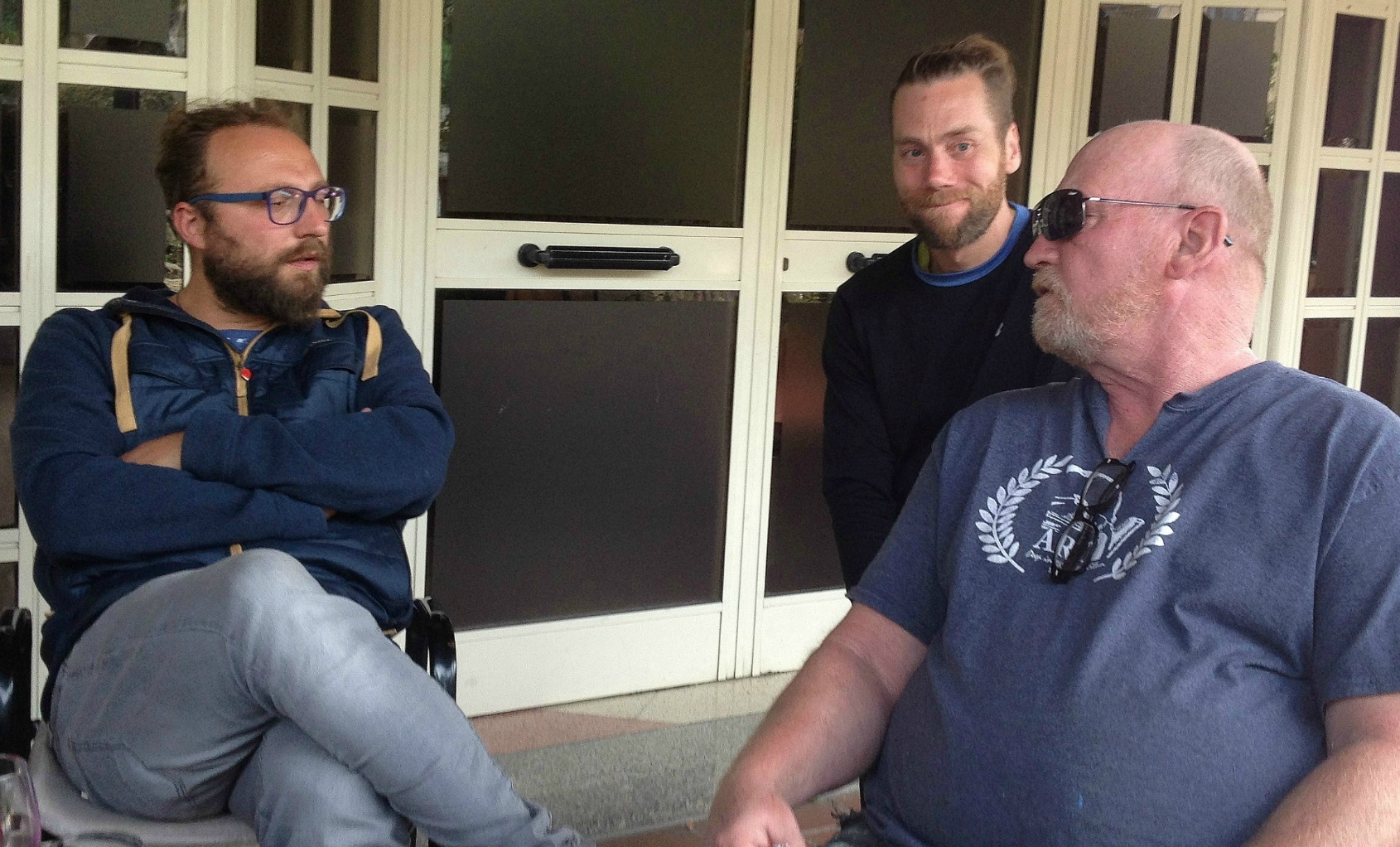 But all of this meant that, once in Prizzi, Atkinson was coordinating the works schedules, lodgings and press conferences for three painters – plus an entire film crew. It’s little surprise that during lunch, Atkinson’s phone never stops buzzing. He was also negotiating with the Prizzi town council. The town council bought the paint for the murals, but the entire town didn’t have a single spray paint can or paint roller. They had to go to Palermo to buy them.

Atkinson gives Mayor Vallone a lot of credit for taking on such a risk and trusting Atkinson — and with artists the mayor never met. But when the murals were almost done, Atkinson got an urgent call from the mayor’s office. He drove right over.

“I have no idea why we’ve been emergently called to city hall,” he says as he hops out of his rental car and starts walking fast. (Prizzi’s streets are so narrow, it’s often betterr walking than driving.)

Turns out Mayor Vallone and town council chairman Giuseppe Castelli simply wanted to thank Atkinson – with lengthy speeches. But also with a massive history of Prizzi, a three-volume book Atkinson probably won’t be able to fit in his carry-on luggage. 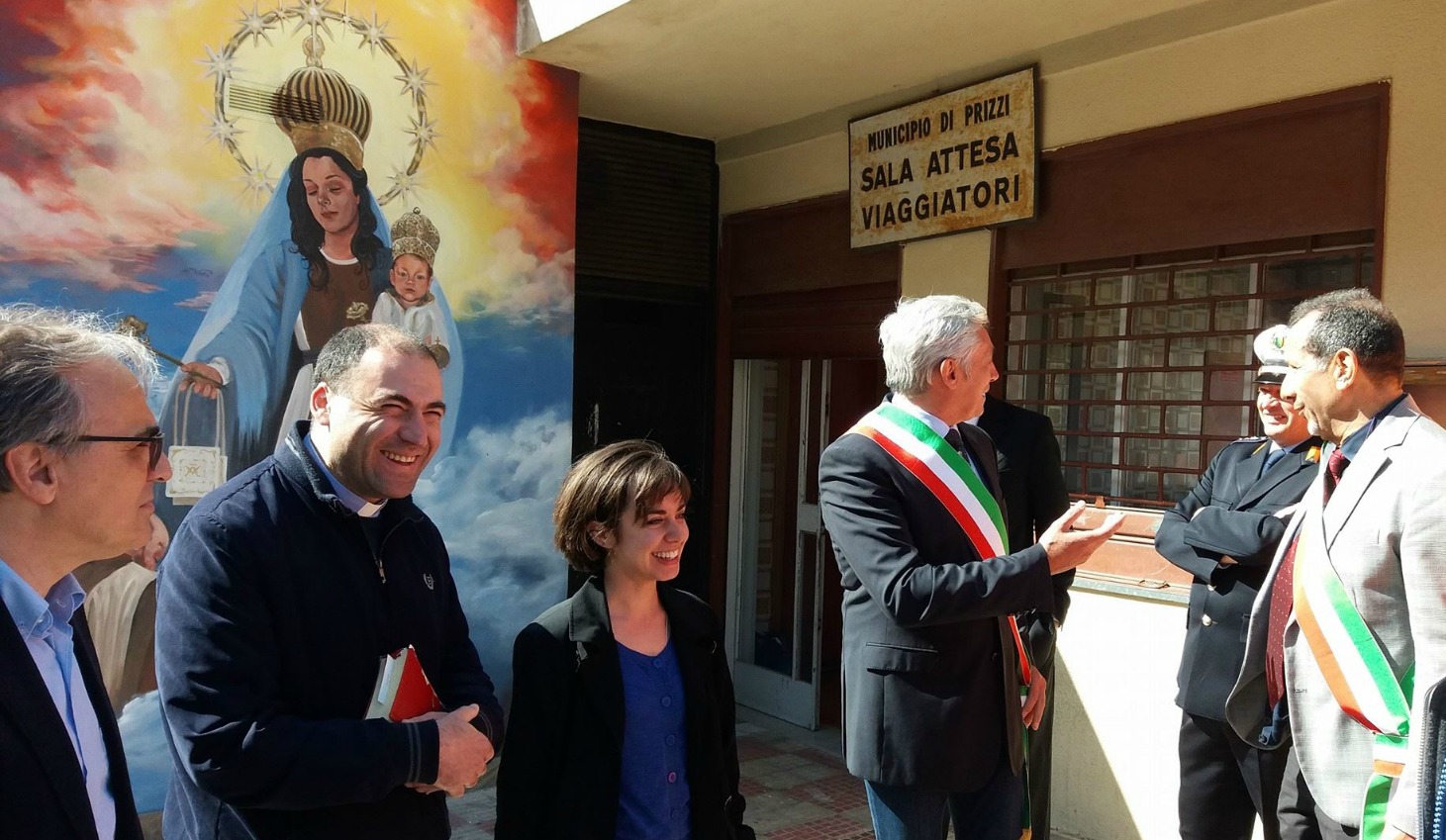 But then council member Castelli floats a suggestion that startles Atkinson.

“I’m asking,” he says, “it could be possible to make a sister project?”

Atkinson leaves, pondering the whole idea of a city-to-city exchange. Prizzi needed painters from outside the town just to create the new murals. So what kind of art or artists could this little village send that typical Dallasites might actually appreciate?

It’s only later – after finishing lunch – that Atkinson comes up with a possible answer. 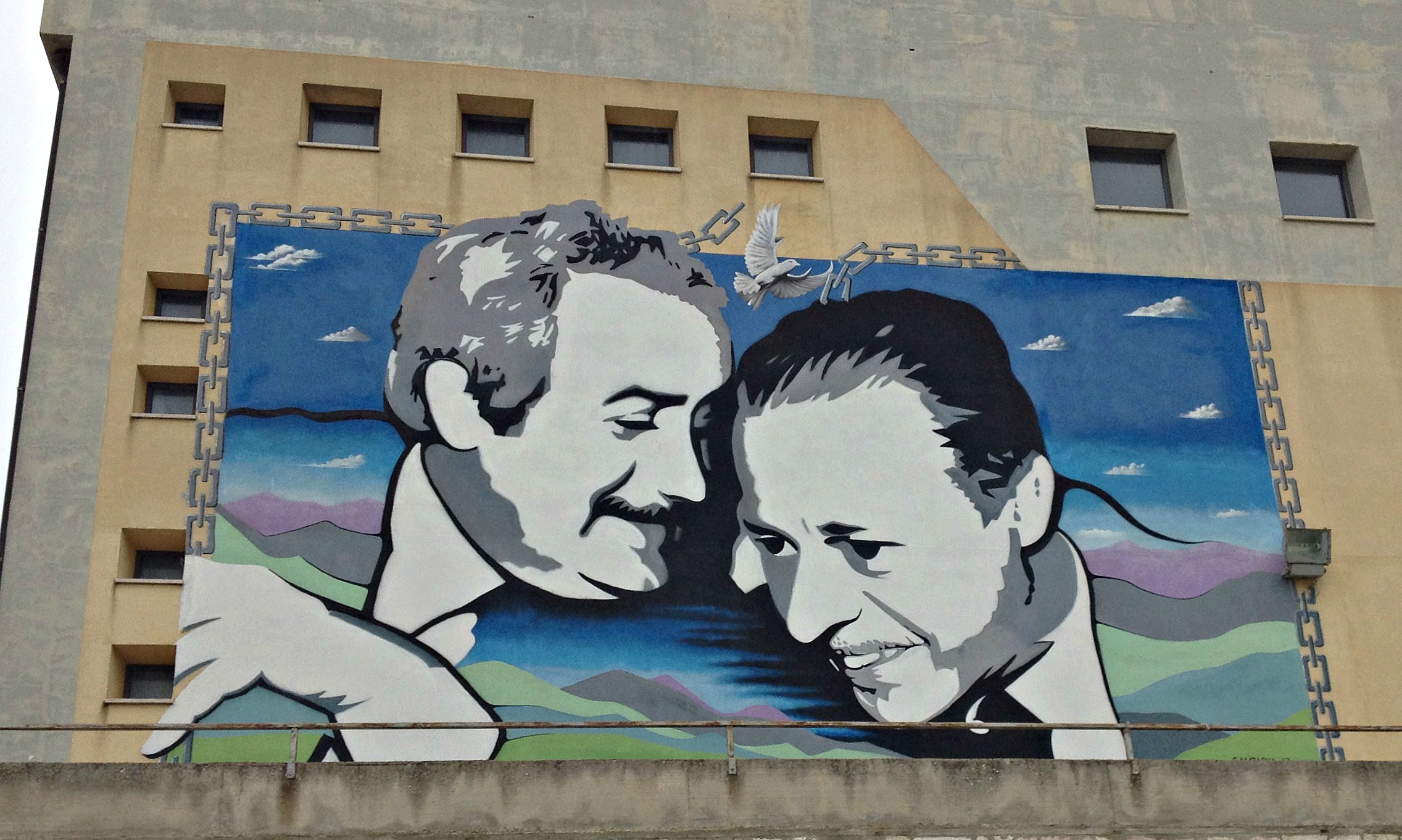