COVID restrictions have forced arts groups to offer shows online to convey some of what their audiences value — that personal encounter with a performance. But a small group of Dallas artists has developed a different approach: a high-tech hybrid of the live and the digital.

Onstage at the Latino Cultural Center were three seats — just three seats for each performance. And all three were inside a glowing, white, 12-foot-by-12-foot cube made of PVC pipe and reflective projection screens. Once audience members are seated there, video projections will surround them — along with ambient sounds and a voice that speaks of “Breath. Space. Sanctuary. Light. Things you take for granted.”

The Cube is at the Latino Cultural Center through Jan. 30th. Reservations are required.

This is The Cube, a new multi-media, immersive performance piece developed by a small group of Dallas stage artists. Ruben Carrazana, one of the show’s creators, acknowledged the whole set-up echoes a lot of pop-culture, sci-fi examples of disturbing white rooms and disembodied computer voices — like Hal, from 2001: A Space Odyssey. Or the racism detector in HBO’s The Watchmen, the psychological torture cell in The Ipcress File from 1965 or, well, White Chamber, the dystopian thriller from 2018. 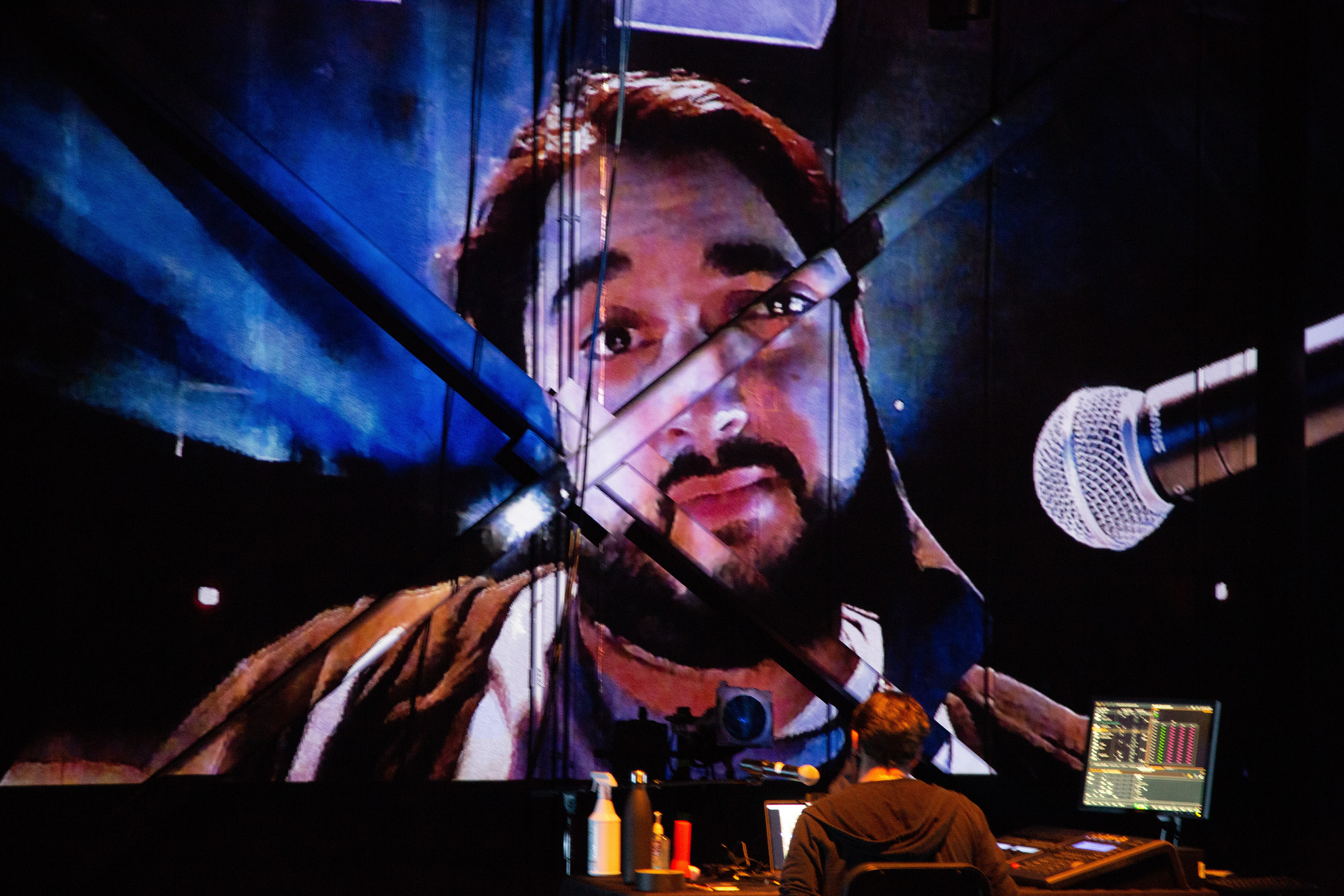 But one of those cinematic echoes is particularly relevant.

“The cube is reminiscent of an isolation chamber,” said Carrazana. “And that was kind of by accident. Once we started loading it in, we realized that it is reminiscent of those quarantine chambers that you see in a movie like Contagion.”

In fact, isolation and quarantine were chief inspirations for The Cube. Last March, like most actors, Carrazana saw his jobs and opportunities vanish because of COVID restrictions. Then theaters shifted from live performances to offering virtual shows. But Carrazana didn’t find that format fully satisfying.

“I tried one and realized it just wasn’t for me,” he said. “There’s very little overlap between what I know how to do and what is necessary for a Zoom reading to work.”

Carrazana missed working closely with other artists, he missed the connection an actor can have with an audience — the kind of human, social connection that, to some degree, we all have lost.

What Carrazana wanted, he said, was to keep actors, crew and audience members safe – while still performing live on stage. It’s the dilemma many arts groups face today. Plenty of people are enjoying our new world of at-home, on-demand dance and theater and visual art. But for thousands of years, those experiences were amplified by an intimate component: We shared the same space with each other and with the art work.

Could any of that in-the-moment, in-the-flesh immediacy be — retained? Safely? 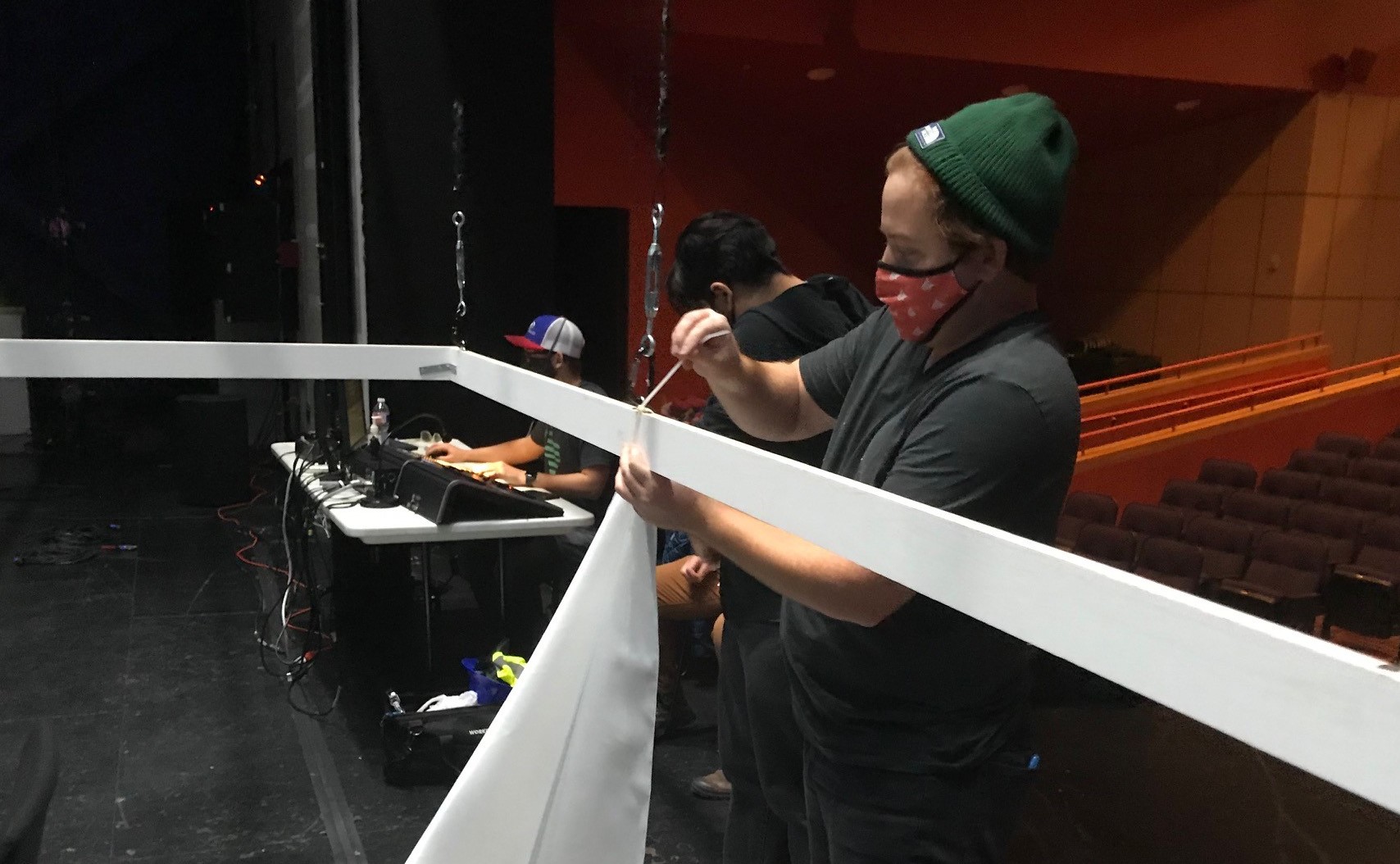 Set designer Jeffrey Moffitt zip-tying the Cube together. Behind him are Carrazana, and the lighting crew, Aaron Johansen and Will Elphingstone. Photo: Jerome Weeks

“And so,” Carrazana recalled, “my good friend Jeffrey Moffitt called me and said, ‘Ruben, what if we created some kind of structure with projection screens for walls that people could enter and experience something?’”

They got a microgrant from Dallas’ Office of Arts and Culture — and got started building their white box.

Onstage at the Latino Cultural Center, Aaron Johansen and Will Elphingstone were programming the lighting effects for The Cube. This was for the show’s “stumblethrough” — when a production’s components are finally assembled onstage — lighting, audio, performers, the cube — and everyone gets to see if all this can function as planned.

It was only a few days before the show opened, yet the stumblethrough was the first time the entire creative team, all of them wearing masks, were in the same room, working together on the show. It was the first time several had even seen the videos or the cube itself. They’ve all collaborated for months almost entirely through emails, phone calls and Zoom meetings. When the cube broke during the stumblethrough, one of them even thought it was just part of the show.

Emily Bernet is the choreographer and dancer for the show; Nigel Newton is the composer and musician. Their collaboration makes up part of whole Cube experience. 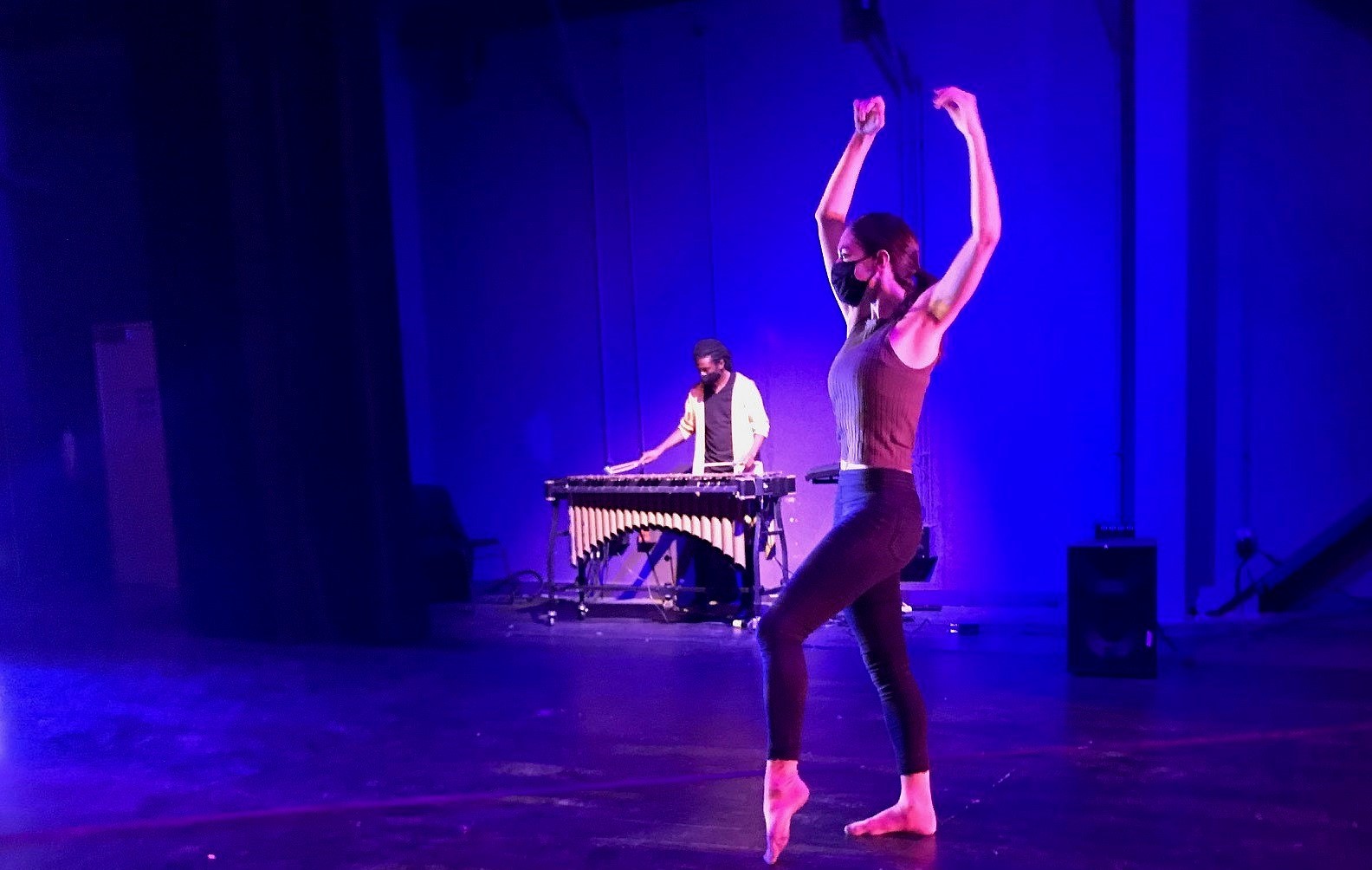 The Cube is a small show, and a short one, only 30 minutes long. But that’s long enough for it to morph into something else, something other than a video immersion chamber seemingly run by a computer overlord. No spoilers. But what was disembodied becomes physical and musical and personal.

“It’s going to blur the lines,” said Carrazana, “between this more virtual, socially-distanced work we’ve become accustomed to and the traditional, live performance work we’ve all loved for centuries.”

Composer Nigel Newton said he was given complete creative freedom over his music. But Carazana did offer some general ideas.

“‘Loneliness’ was the first adjective that he gave,” said Newton. “So that was the primary drive. But then, there’s a bit of joy – and kind of all the things that I felt in quarantine these last few months.”

The Cube was created in isolation and it’s about isolation.  In however small and socially-distanced a way, the show attempts to convey what we’ve been missing — from the performing arts and from our own lives.

It’s about getting beyond the box.