Skip Navigation
Home > ArtandSeek.net > SXSW Is Full Of Art This Year. Here’s What To See

The 2019  SXSW Conference and Festival kicked off over the weekend.

Watch some of the most anticipated SXSW panels and discussions here.

And the highlights have included keynotes from television and film writer, director and producer Marti Nixon, the world premiere of the newest film by Academy Award Winner Jordan Peele and a conversation with Trevor Noah & The Daily Show team.

But one of the lesser-known aspects of the festival is the SXSW Art Program. That’s right, art! For the third straight year, the festival is presenting a lineup of curated installations. The artists come from around the world. And the immersive artworks use technology as a vehicle to explore topics such as the human spirit, cultural traditions, and how we interact with our environment. The works engage audiences, asking them to think about the role visual and digital media arts play in society, shared spaces, and technology.

I’ve been speaking with artists and checking out all eight installations. Below, see photos and videos of the works and some insights from a few of the folks I’ve spoken with along the way.

PanGenerator is a new media art & design collective based in Warsaw, Poland. Their installations ‘APPARATUM’ & ‘hash2ash’ are on view inside the Austin Convention Center (see video above).

At first sight, ‘APPARATUM’ looks like a futuristic doohickey. Seriously. Fans of Star Trek might even confuse it for some sort of comms machine. (You know like the ones flashing and beeping behind the Star Fleet’s translator and communications officer Uhura.) But upon closer inspection – and a brief reading of the artists’ statement – it’s revealed that ‘APPARATUM’ was actually inspired by a music studio from the 1950s. It’s called the Polish Radio Experimental Studio.  And it’s one of the first studios in the world to produce electroacoustic music.

The artists say the installation also draws inspirations musically and graphically from a composition called “Symphony – electronic music” – composed by Bogusław Schaeffer. Schaeffer, a celebrated Polish musician, is known for dreaming up his own visual language using symbols to convey sound cues that engineers use to assemble songs. The collective is reusing that idea with ‘APPARATUM,’ except now the audiences are the music makers.

‘hash2ash’ is the collective’s second installation on view at the conference. It asks audiences to upload a selfie to their network. The selfie appears on a screen and quickly disintegrates. The selfie turns into a pile of ash that sits directly beneath the screen. The artists hope audiences consider the idea of selfie-culture, and the realistic fear of permanently losing the digital records of our lives due to technical failures, the impermanence of data storage, or, simply, obsolescence of old digital file formats.

“Belongings” was created by SBS Australia’s Digital Creative Labs – an experimental visual storytelling group inside of the national public television network in Australia. It’s on view at the JW Marriott Austin.

The artwork invites audiences to listen to and watch testimonials from migrants living in Australia. They talk about the reasons they’ve left their homelands – war, persecution, opportunity – and things they had to leave behind in search of a new life. But it’s not all about lost possessions and relationships. In fact, the people in this immersive installation talk about one possession they held onto through their arduous journeys; things like a purse, a necklace or a cloth soaked with the scent of a beloved family member.

Collin Anderson, a film student at the University of Central Arkansas in Conway, Arkansas, engaged with “Belongings” with several friends. And he says the stories shared are amazing to listen to and that he found them moving. “It’s just so interesting to see that a mundane object – to me – could mean so much,” he says. Anderson wasn’t simply moved emotionally though. He says the work provided him new ways to think about filmmaking, “This is a great way to show that you can tell stories in other ways than movies, TV, and books.”

‘Blooming’ is the creation of the Korean-American artist Lisa Park. It uses biometric sensors, such as heart rate and brain waves, to create intimate environments that display hidden emotional states such as vulnerability, intimacy, and confrontation. Badge holders can see it at the Hilton Austin.

Park says “understanding human relationships and emotion has been an ongoing investigation” in her practice and “Belongings” is an extension of that search. She told SXSW that using biometric sensors is her way to turn the invisible – our inner feelings – into something visible.

The artwork itself is made up of two components: a screen displaying a cherry blossom tree and sensors that people step upon to have their metric read. When you enter the room, the tree has not bloomed. It’s simply a tree with bare branches. But as you step upon the sensors, the tree changes colors and blooms according to the metrics an audience member is putting out into the world.

‘EVERY THING EVERY TIME’ by Naho Matsuda Producer: FutureEverything

The London-based artist Naho Matsuda’s installation asks, “What stories can be unearthed from a city using the data generated by its residents, visitors, and workers?” And folks willing to walk around the convention center during SXSW can find out. All they have to do is take a walk past Brush Square Park on 4th Street.

In ‘EVERY THING EVERY TIME’ Matsuda says, ” I have turned data streams into narratives formatted as poems. Data, stripped from its original context and purpose, becomes impractical poetry. The work interrogates where data comes from, who owns it and how it’s used.”

The work was produced by produced by FutureEverything. The group’s spokesman, Andy Stratford, says they’ve come to SXSW with ‘EVERY THING EVERY TIME’ to get people to consider data. He says we all ought to think about where it’s coming from, where it’s going and what’s being done with it. “We give out a lot of data,” Stratford says, “and this is a bit of a meditation on that.” The work can turn mundane Tweets, texts from social media posts and search engine searches into haikus, which is beautiful, but at what expense? 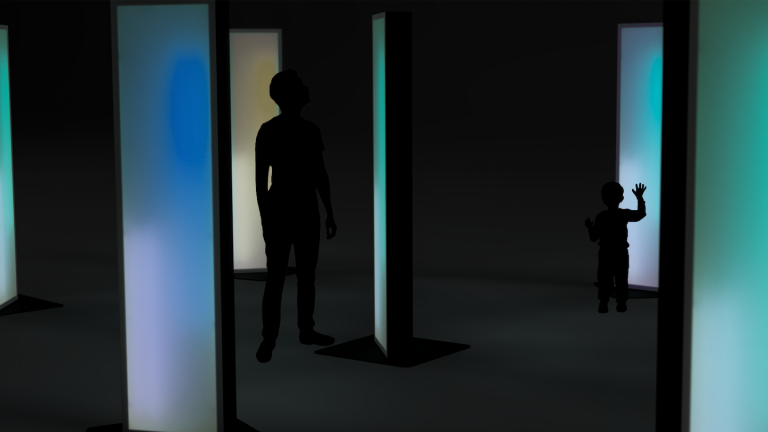 ‘Semeion’ is an evolving light and sound installation where art meets artificial intelligence. See it at the JW Marriott.

The artwork takes AI from the shadows and places it right in front of audience members. The machine’s thoughts and reactions to people manifest in several large minimalist structures that light up and make noise. The artists say it’s “abstract form it evokes the human relationships through its behavior.” They invite viewers to suspend their preconceptions about AI, and engage with it in an explorative, curious way.

‘Weaving’ is a light art performance inspired by the frantic nature of SXSW. CocoLab’s Alejandro Maturo says the collective wanted to create a moment of calm in the middle of the conference and that idea birthed the artwork. You can relax and bathe in its calmness inside the convention center.

The artwork mixes art forms with the Mexican tradition of weaving, music making, light art, and performance. It’s something that needs to be truly experienced, but you can see a preview in the video above.

Louie Palu is a Canadian documentary photographer and filmmaker known for covering social-political issues, including war and human rights. His installation is a series of large photographs frozen in large ice blocks. You can see them on the plaza of UT Austin’s Harry Ransom Center. The photos were made in the Arctic over three years, while Palu was on assignment for National Geographic.