The Tuzer Ballet’s production of ‘The Nutcracker’ this December will be the first one in the company’s 33-year existence without one of the roles filled by its founder-director, Tanju Tuzer. In December 2014, Tuzer was shocked by a diagnosis of late-stage colon cancer. Even so, he continued to teach – and to appear in ‘The Nutcracker’ in what has become a beloved role, Herr Drosselmeier.

But this week, Yvette Abernathy, a member of the ballet’s board of directors, sent a message saying that the Turkish-born, London-trained Tuzer was now at home with his wife Patricia and under hospice care. He’d had surgery a little over a month ago to remove a tumor; it turned out he needed a colostomy. But Tuzer was too weak to undergo more chemo, so the cancer continued to advance. 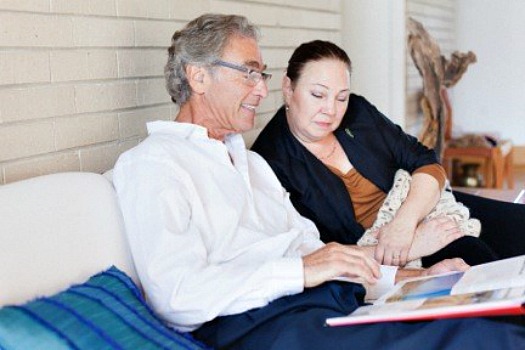 Tanju Tuzer and Patricia Tuzer on the porch of their home. Photo: Tanzer Ballet

The news has hit social media, with alumni of his Tuzer Dance School – which he established with Patricia in 1977 – and dancers from other companies offering to cover for him. It was his wish that ‘The Nutcracker’ go forward without him, if need be. Travis Morrison is an alum and is stepping in to play Herr Drosselmeier.  Kathy Chamberlain of Chamberlain Ballet in Plano has asked to help. Kimi Nikadoh, artistic director of Bruce Wood Dance,  is another alum who’s stepped in to run rehearsals. Others have volunteered to perform or work backstage at the Eisemann Center in December.

The company hopes to establish a foundation in Tanju Tuzer’s name; for those who wish to contribute to the company, here’s the link.