Skip Navigation
Home > ArtandSeek.net > The Pandemic Killed His Gigs. So This Fort Worth Musician Got Creative.

As a musician, Joe Savage typically gigs all over North Texas. But COVID-19 emergency orders made typical work for the Fort Worth singer-songwriter impossible.

Joe came up with a solution: He asked his apartment complex to hire him as the resident entertainment and created the Courtyard Quarantine Concert.

Joe spoke to us about losing his income due to the coronavirus pandemic. Here are his thoughts, in his own words:

The music I make is considered country, Americana, folk – it definitely falls under those three umbrellas. I’m inspired by artists like The Beetles, Johnny Cash, Bob Dylan.

Some people describe my music as Chris Issac meets Johnny Cash. I love writers like Kris Kristofferson and John Prine. They inform my writing and storytelling in every song.

What I love most about being a musician is that I’m my own boss. I may have always had a slight problem with authority growing up and in my other career paths. So the biggest thing about all this is that I’ve learned a skill that enables me to go out and earn my living without having to report back to anyone. But I’m also accountable for everything.

Life for me before coronavirus came was really a gravy train of playing mostly D-FW regional gigs with my band or solo. Really decent pay. A great community that I was always around. 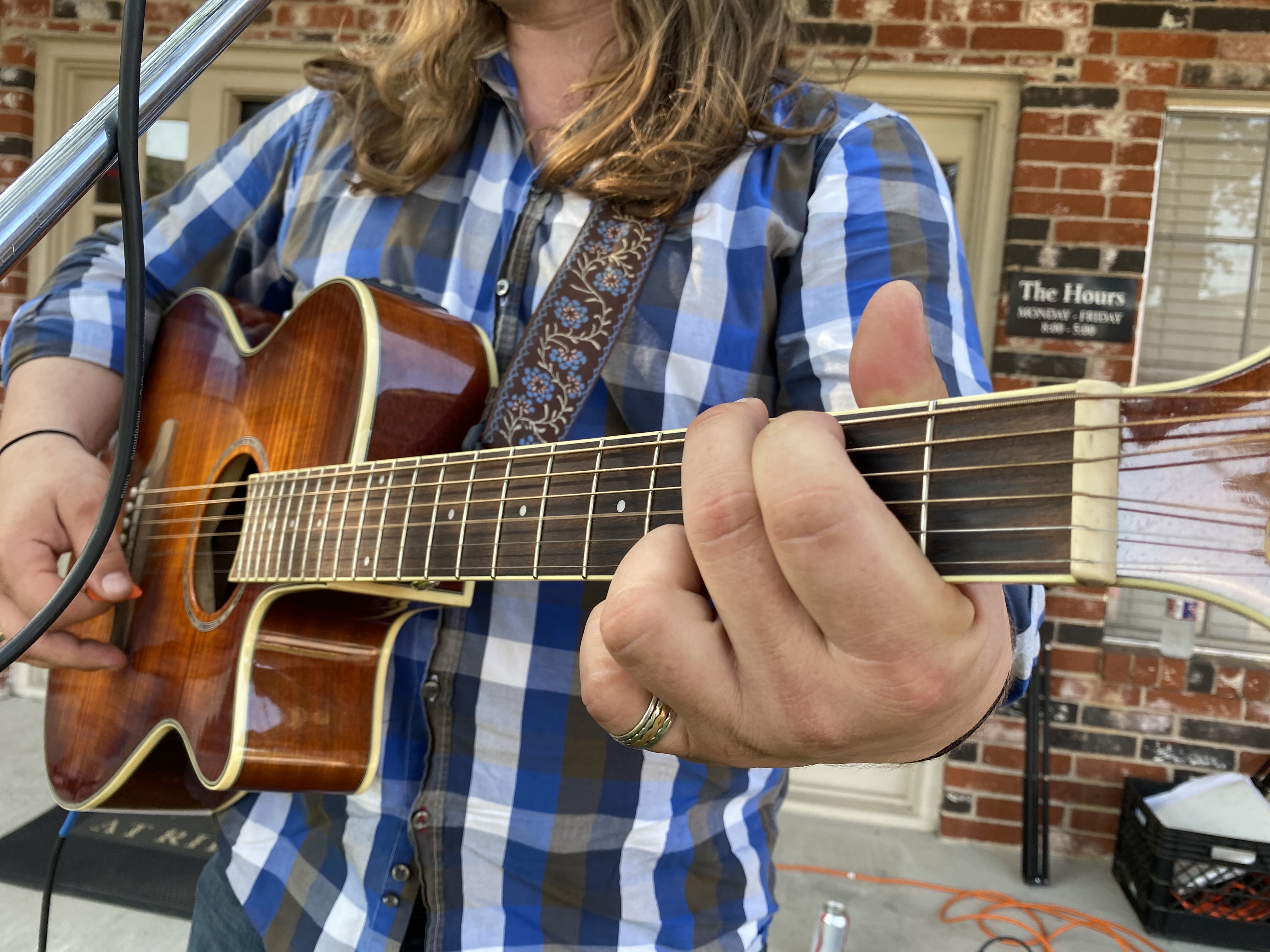 “I plotted an escape,” Joe says of his college years when he began thinking about music more seriously. “My dad’s guitar came with me to San Francisco. On the drives, I would just pull over and stop and play.” (Photo: Hady Mawajdeh / KERA)

Gravy train is the best way to say it. I mean, we had venues to play at, fans that were coming out. There were people watching our videos online, we were working in the studio on singles and I was really at a high point for a local musician. I even started branching out to places like Lubbock, Midland, San Antonio, Houston. I had even gotten in with a management company I had been pursuing for a few years. And they were gonna send me to Minot, N.D., for a weeklong gig, six days in a row at the same bar for five hours.

I’ve just wanted to work with this company for so long … however, all that was pre-coronavirus times. We have not made that up yet.

For me the gravy train has been a few residencies on your hard-to-book days, like Sundays and Mondays. And for the first time ever, I had accomplished getting those sorts of gigs in 2020. I had a reoccurring gig called The Sunday Open at Landmark Bar & Grill on West 7th. That was amazing pay. And on Mondays I was out in Azle at a bar called Split Town Tavern. It was an open mic that I hosted. Mondays are even harder to book than Sundays. I was supposed to have those residencies throughout 2020.

Music, for me, really came about in a really zig-zaggy, long road that started when I was really young. I performed in the school choir. And I was always beloved by my teachers. But eventually sports won out. I didn’t start performing or singing or anything, really, until my college years. I had always written poetry or written music, but at that time, no music. Then I borrowed my step-dad’s guitar without asking. I started reading Jack Kerouac. I read Into the Wild. And then I was just blown away.

I plotted an escape. My dad’s guitar came with me to San Francisco. On the drives, I would just pull over and stop and play. That’s when I met a guy who told me, “Why don’t you tune that thing from time to time?” So I started doing that, and it made a big difference!

KERA’s Art&Seek has been tracking how the arts world and artists are dealing with life on the financial edge during the pandemic:
▸ View more One Crisis Away: Coronavirus And Life On The Financial Edge coverage.
▸ Are you an artist who needs financial assistance due to the pandemic? Browse resources in the Artists category at KERA Helps.

Once I settled down on the west coast, I stopped in Portland. That’s where I went to school. That’s where I met folks in songwriters’ circles and my music just progressed.

When I came back to Fort Worth, I worked as a teacher. But I started going to open mics here and people supported me. I was getting my music critiqued and I got better. Eventually, I quit my job. A taste of a few $50 gigs was all I needed to be able to jump in.

I quit my job in 2013, and I went full-time as a musician. That’s even after my friend counseled me and told me that $50 twice a week is not enough to live on.

And they were right, especially when I was making, like, three-grand a month as a teacher. But you know, as a musician, you end up doing a lot of jobs. I had a friend teach me to be a sound engineer. And I did a lot of odds-and-ends jobs, like working at hotels, moving band equipment. That’s how you meet people.

So March 17, we had a Tuesday gig for St. Paddy’s Day. It paid great. It was just me and my guitarist. We felt lucky to be there, but we knew we were edging up against no more gigs. The NBA was canceled on March 11, so from that point on we were all just so glad to be even standing on a stage together.

After my gigs went away, I got depressed. I ate too much because I had bought more food than I had ever bought. And I had been doing an Airbnb prior to COVID, so I didn’t have that, either. I had to stop because I didn’t want to give them the sickness or for them to give it to me.

When the NBA happened, every gig I had was wiped off for 30 days. But really most venues wiped me off for 60 days. I was worried about my savings. I had been saving for a trip. And because of the gravy train, I had a lot of “gravy” at home. So I had to be smart. I payed my bills ahead of time for April. But I had no idea what I was going to do about May. Or after May.

That’s what made me write the letter to my apartment complex. I had to explain to them what was happening. 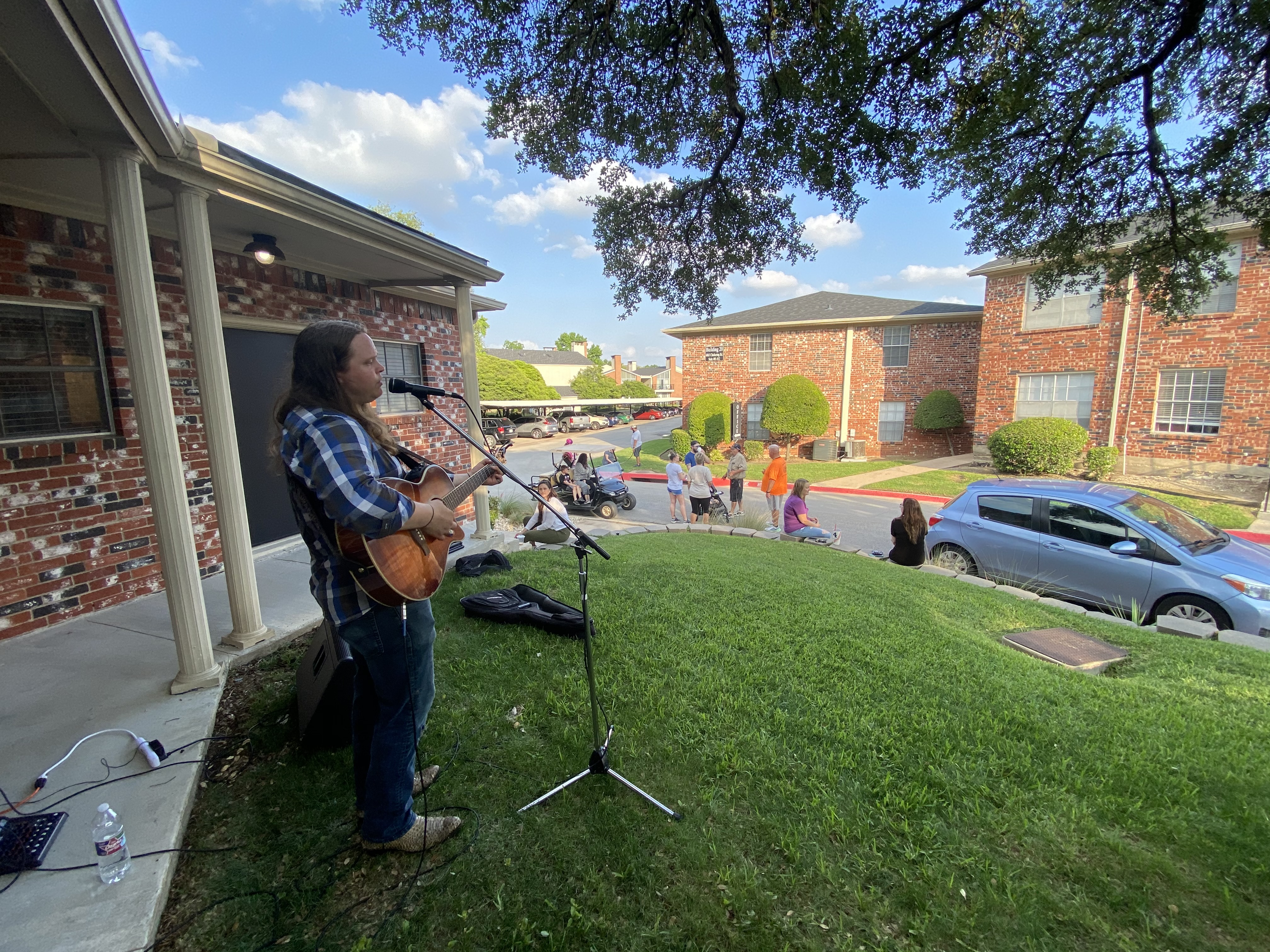 After I talked to them on the phone for a little while, I realized that the apartment managers were struggling with what to do just as much as I was. And so, I needed to figure out how to make them my ally and not make them — the manager who was trying to kick me out — the enemy, even though they did tell me that if I wasn’t able to make my rent payment, they would have to start paperwork for the eviction process. But they wouldn’t actually evict me until the courts were opened back up.

So, I sat down and did my best. I used all of my college skills, and stuff from my speech class, and my experience from my years of teaching, and I wrote the best letter I could possibly think of. In the middle of it, I offered my services as a singer-songwriter-performer for $100 an hour. I called it the Courtyard Quarantine Concert series. I just gave them some reasons that it would be good for both of us.

To play for the crowds at these apartment complexes is amazing. It pushes me to open up my set. It pushes me to think about the fact that they didn’t come to the bar to listen to me. I’m going to their home and playing for them. It’s been amazing.

The first time I did it, it was in front of my apartment building, like where I actually live, and my neighbors all came out. It was the most warm, fuzzy, crazy good feeling. They were all clapping. People were running down $20s and putting them in my case, even though they weren’t supposed to, because we said only Venmo tips. But I quarantined the money and kept it. They needed to give it away, I guess.

I’m just so grateful that I can share my music with my neighbors.

Our interview with Joe was lightly edited for clarity.