The 2008 presidential election was a landmark, elevating Barack Obama as the first African-American in the White House. For the latest Art&Seek Spotlight, Jerome Weeks says ‘Obama-ology,’ a comedy at Fort Worth’s Jubilee Theatre, re-tells that campaign from an angle we’ve rarely seen – the ground level.

These days, the news is pretty much all politics 24/7. And we’ve seen how such stories get shaped – for dramatic conflict or visual impact. There’s the constant polarization, for instance. The blaming and name-calling: “Boy, this campaign has really gone off the rails, hasn’t it? I mean, it’s become an insult comedy contest,” says Howard Kurtz, Fox News’ media critic. “It’s become a brawl.”

Got all that? Be sure to carry the four and don’t forget the percentage point.

With American campaigns and elections, what we typically don’t see or hear about is this: “Most campaigning is a grind,” declares Aurin Squire. “It is not sexy. It involves long hours. It is the lower-level people pounding the pavement again and again and again.”

Squire wrote “Obama-ology,” which is getting its area premiere at  Jubilee Theatre. A playwright, journalist and TV writer, Squire is a self-confessed political wonk: “When I went to college at Northwestern, I worked as a reporter for the school newspaper – and as a volunteer, as a campaign staffer and as an activist for different human rights issues.” 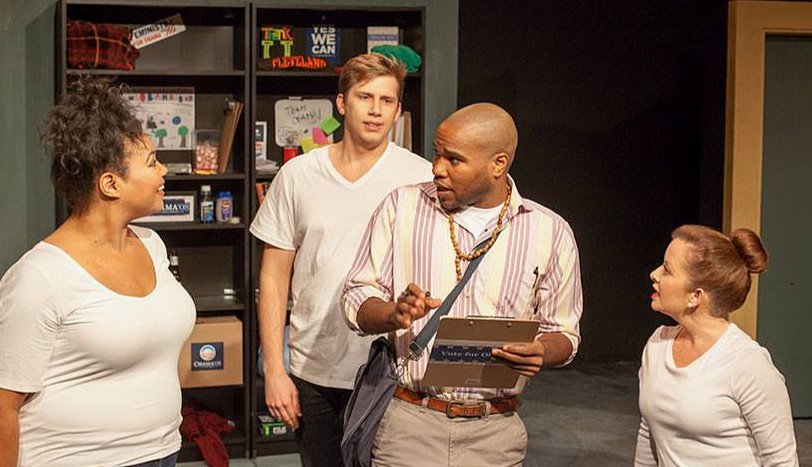 ”Obama-logy” focuses on what’s called the “ground game”: knocking on doors, handing out flyers, making phone calls and — finally — getting voters to the polls. It’s not exciting — which is a big reason it rarely appears in movies, on TV or on the stage. The most you see, typically, is one shot of exhausted staffers at campaign headquarters and maybe a two-minute tag-along with a volunteer talking to “an average voter.” Cut to commercial, end of the coverage of the campaign’s nuts-and-bolts.

But it’s these old-fashioned methods that often get people elected – not the tweets and the YouTube ads. Social media can assemble a crowd of people-in-agreement faster than ever before – for that protest march. What it doesn’t do so well is build a sustained movement that will keep building momentum, putting on pressure, raising money, getting people to vote.

Squire himself worked for the 2008 Obama campaign in East Cleveland, which was strategically targeted. Obama was often hailed for his influential use of social media in that election, but what really made the difference, Squire says, was getting out the vote – more votes, in some areas, than had ever been cast before.

“East Cleveland is a predominantly black neighborhood that has a very bad voting record,” Squire says. “So Obama and the powers-that-be decided to focus on getting those numbers up and creating new votes, creating a larger pool outside of polling statistics.”

The idea was that if East Cleveland could deliver like it had never delivered, candidate Obama might win Cleveland. And if he won enough votes in Cleveland, he could offset the more conservative, white voters in the rest of Ohio — and thereby win a very big, very important swing state.

In ‘Obama-ology,’ the main character, Warren, is a campaign advisor, new to Cleveland. He embodies the class hurdle Obama faced: How does a highly-educated black man appeal to an impoverished, African-American community with every reason to think the system is rigged against them – and suspicious that this new guy is just out for himself? Warren, the campaign advisor played by Lee George, aspires to ‘elevate’ his fellow African-Americans. But Laura, his white manager played by Dayna Spring Fries, says Warren’s results are bad because he just sounds like he’s talking down to people.

“My parents worked hard to send me to the best schools,” Warren argues, “and I worked to make the honor roll, to get into college and to prove I belong with the best. My ancestors did not raise me up on their backs to act like a degenerate ghetto thug.”

“Warren,” Laura fires back, “it’s that attitude that is creating this issue.” 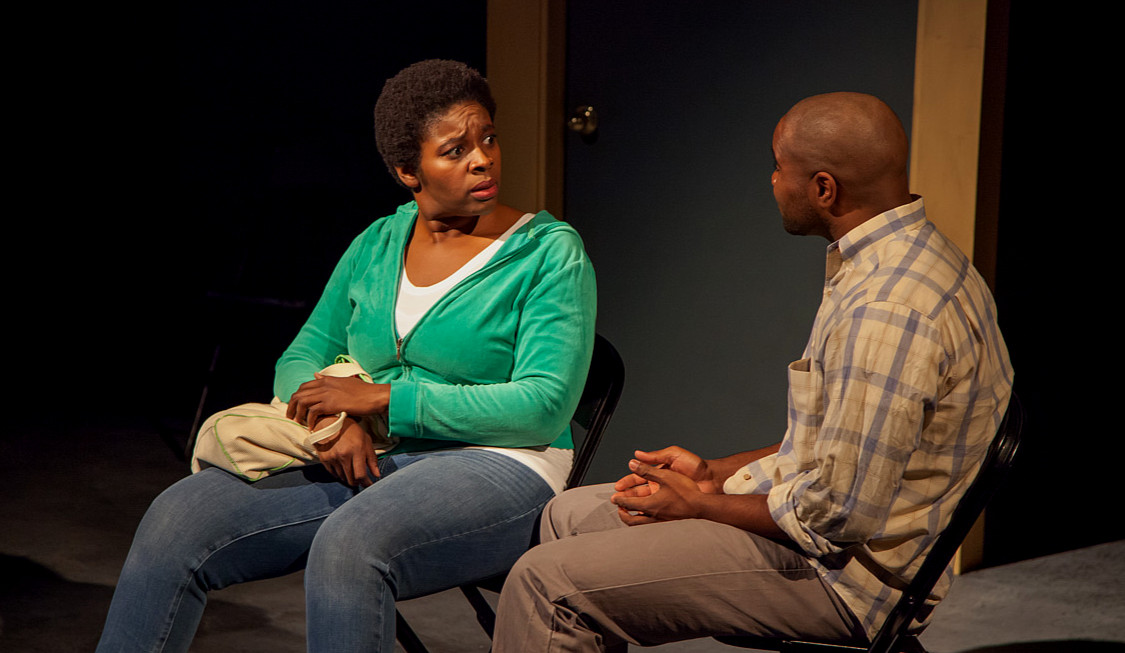 Lee George, as a campaign advisor (right), trying to convince a doubtful Clevelandite (Chris Sanders) to work as an Obama volunteer.

Says Squires: “It’s a fish-out-of-water plot. They assume he’ll fit in because he is black but he does not fit in, so he has to find his own space.”

Some of “Obama-ology” is a bit lecture-y, but then, they’re often comic lectures. One of Squire’s campaign jobs was training volunteers. So we learn how staffers live and work out of their cars. It’s best to bring a comfy jacket – to use as a pillow. Always stay calm during police stops — and there will be police stops. And keep a spray bottle of Febreze handy – to freshen up the car. And your clothes. And yourself.

But despite such interesting insights into class conflicts and campaign hygiene, you may have noticed a dramatic problem with this story. It’s one that Republican strategist Karl Rove learned about – live on FOX News on election night 2008.

“If he loses Ohio,” Rove says of Obama, “he’d not only need to sweep the rest of these states, he would also need to pick up some states as well.”

“Guess what, Karl?” says Brit Hume. “I’ve just received word that the state of Ohio has gone for Barack Obama.”

Obviously, the dramatic problem is that we already know who won. There’s no suspense about the outcome. But then, ‘Obama-ology’ was hardly intended as an election cliffhanger nor as a nostalgic victory lap. It’s about how Warren learns to be himself, how he finds a place for himself in a political campaign – while dealing with black co-workers, white managers, white police officers and unemployed black neighbors. Squires say that this entire balancing act is similar to what still faces black or female candidates – like Cory Booker, Kamala Harris or Alexandra Ocasio-Cortez : Any victory is temporary. You make one group happy one week, then there’s the unhappy group the next week, and the next.

“There’s just no way that you’re going to satisfy all the people all the time,” Squire says. “You’re going to face criticism from all sides, and still you have to keep going.”

And just in case you hadn’t noticed, these issues of race, economics and competing interest groups are back. Because the next presidential campaign has begun.