Art&Seek is highlighting new music from North Texas every Thursday. Click above to hear me talk with Jason Roberts, co-owner of Revelers Hall and Elevated Busking Records, and Philip Joseph from the Revelers Hall Band. Our Music Minute airs on KERA FM and KXT 91.7. For more North Texas music, tune in to the KXT Local Show at 7 p.m. on Thursdays. And tell us what you’ve been listening to on Facebook, Instagram or @artandseek on Twitter. 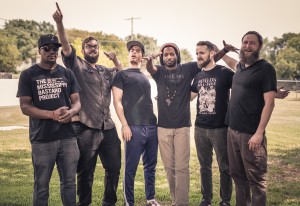 Nestled in the heart of the Dallas Bishop Arts District, right around the corner from Oddfellows on Bishop Avenue, you’ll find Revelers Hall.

The venue opened in March of 2019, and there was one thing that co-owner Jason Roberts (formally of the band Happy Bullets) was sure that he wanted the establishment to have: a house band that could support the artists who would come through and perform.

“I love the idea that we have this venue, we have this talent coming through, and then we have this house band that’s just getting better and better, ” Roberts said. He says Revelers Hall Band was inspired by groups like Motown’s Funk Brothers and Stax Records’ Booker T. & the M.G.’s, where a solid backing band can back up new artists who come in to perform but also stand alone as its own group.

The Revelers Hall Band plays under the direction of Kevin Butler (who is also the band’s sousaphone player) and features Philip Joseph on trombone, Alcedrick Todd on trumpet, Daniel Porter on piano and Christian Levens on drums. In addition to the five core members, there is also a full roster of musicians who rotate in to perform with the ensemble.

At its core, the Revelers Hall Band is full of high-energy jazz and can be considered acoustic — but not singer-songwriter acoustic.

“This is like what it would have been like in New Orleans in 1925, and this is just a bunch of guys that blast the doors off the room and still create the energy,” Roberts said. “If we wanted to put electronics into the mix we can, but they can play it without, too.”

The Revelers Hall team also created Elevated Busking Records, a label whose music is rooted in jazz with horns at the forefront, as a way to help artists get their music out.

The inaugural release for Elevated Busking Records is the Revelers Hall Band album, which dropped May 7 and was celebrated with a sold-out album release show at the Kessler Theater.

The debut single off Revelers Hall Band is a cover of a high energy jazz classic called “Always There.” The song was originally recorded in 1975 by saxophonist Ronnie Laws before being covered multiple times, most notably by British acid jazz band Incognito (feat. Jocelyn Brown) in 1991.

Philip Joseph, the trombonist for Revelers Hall Band, says one of the best things about “Always There” is the amount of crowd participation involved when the song is played live.

“Before we even start the song, we require the audience to start clapping and then we have a little section… I call it the Dragonball Z moment, where we’re just like awwwww… and then we just break out and start going H.A.M.” Joseph said. “It’s a really high-energy song… it’s fun.”

The song IS fun and the energy is contagious in Revelers Hall Band’s version of “Always There.” The song is almost five and a half minutes of a great time, and the listener gets to experience both Joseph’s Dragonball Z moment and what it feels like to be transported into Revelers Hall.

“It feels like you’re at Revelers Hall,” Roberts said. “You’re right up front, you’re doing this big roll-up at the beginning, and the guys are kind of singing, and then all of a sudden it breaks out into this big raucous brass number.”