At the corner of Cadiz and South Howard Streets near the Dallas Farmers Market, there’s a new mural depicting tall buildings, with rooftop gardens, water walls and solar panels, interspersed with wind turbines. It’s a reimagining of the Dallas skyline.

Prominent Dallas buildings and bridges like the Reunion Tower, Margaret Hunt Hill Bridge and the Fountain Place are part of the mural, but re-envisioned with a lens toward climate change initiatives.

The mural, titled “Dallas Dreams,” was installed by the nonprofit Climate Reality Project this week ahead of Earth Day Thursday.

The organization wanted to raise awareness of Dallas’ Comprehensive Environmental Climate Action Plan, approved by the Dallas City Council last May. The mural aims to depict what putting that plan in place could look like in an urban environment like Dallas. 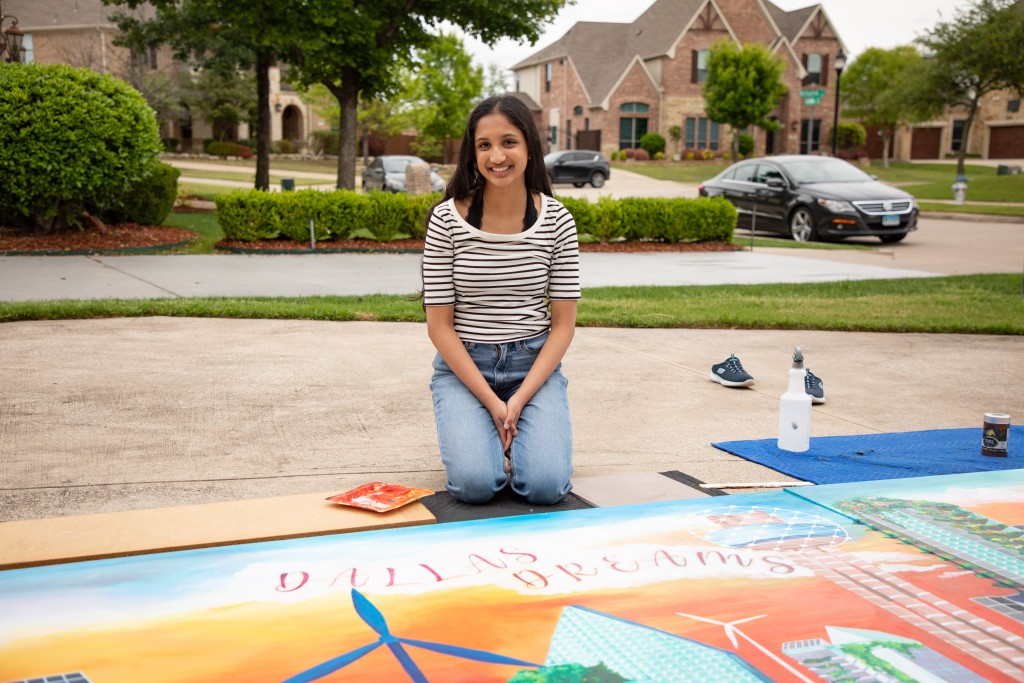 Ishrita Pol is one of the only high school students who is a member of the Climate Reality Project in Dallas. She designed the “Dallas Dreams” mural. Photo credit: Keren Carrión.

Ishrita Pol, 16, is one of the few high school students who is also a member of the environmental organization. She took the lead on designing and painting the mural for this project.

The mural took over three weeks and more than a hundred hours to make. From the planning process to painting the sealant coat, to the long nights and weekends painting the background and all the details. 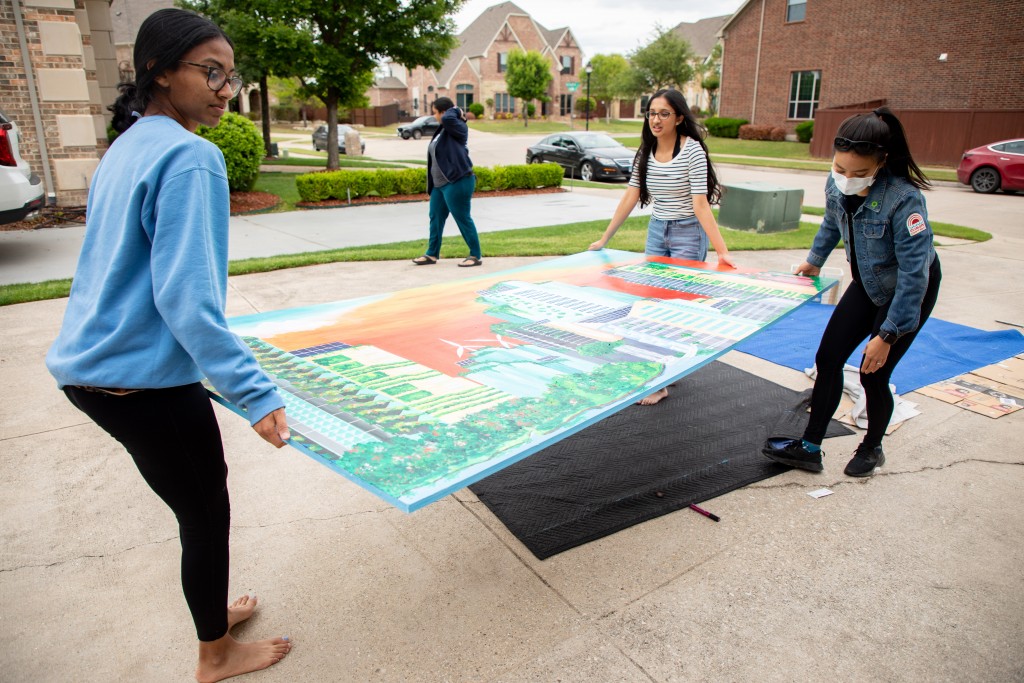 The artists carry a piece of the mural into the garage, where they will seal it with a glass coat, before installing it in downtown Dallas, on Sat., April 17. Photo credit: Keren Carrión.

Pol said balancing school with the mural has been difficult, and she’s had to put in a lot of extra hours outside of her school work and extracurriculars.

“She worked 12 hours on Sunday,” her friend Vedanti Naktode said. “It’s been a long process.”

Lisa Ricci, a member of the nonprofit, was the driving force behind getting the piece  created. It is  installed at her creative loft space, where she hopes to create a zero-waste film and photography event venue.

Originally from New York City, Ricci said she wanted a mural that reflected her passion for the environment and urban health.

“I want people to come by and tell how they’re making a difference,” Ricci said.

One of the key organizers of the project, Li-Ya Mar, organized several brainstorming sessions until they landed on a mural based on Dallas’ climate action plan. 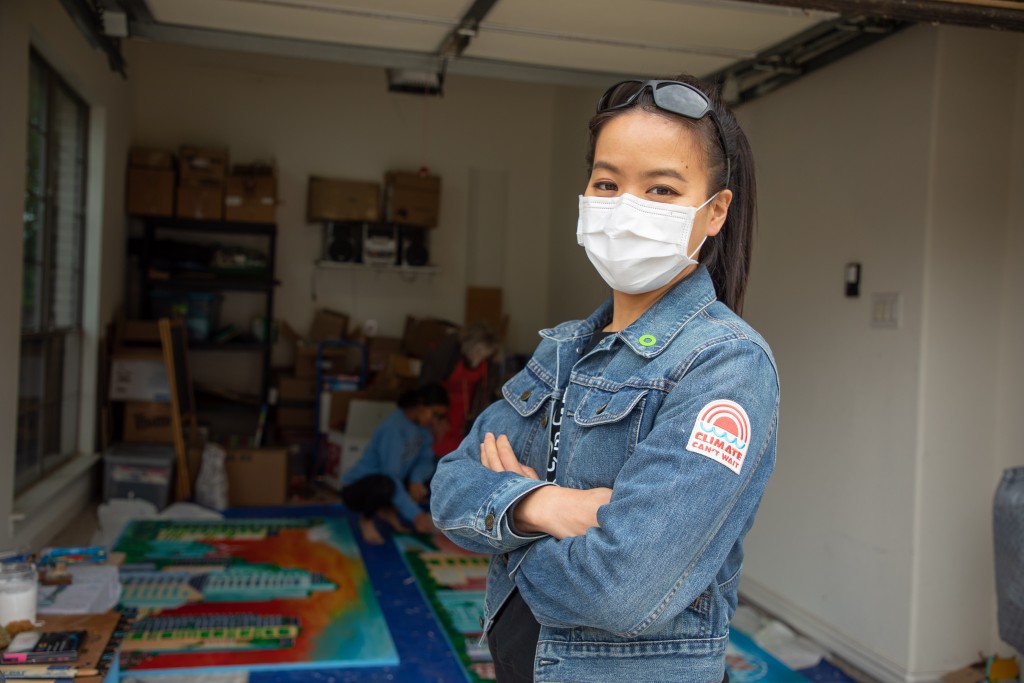 Li-Ya Mar, vice chair of the Climate Reality Project in Dallas, wears a “Climate Can’t Wait” patch while helping prepare the mural for installation, on Sat., April 17. Mar is one of the key organizers of the mural project. Photo credit: Keren Carrión

One of the goals of the city’s climate action plan is to create solar farms within the city.

“That’s what we have put into the project,” Mar said. “We tried to put as many solar panels on high rises in Dallas because if we have solar panels in all the high rises, a lot of the power generation can come from them.”

Other goals of the plan include increasing the tree canopy cover and creating equal access to green spaces across the city.

“This is sort of like bringing the imagination of what can be done to that iconic Dallas skyline,” Mar said. “At the bottom of the mural, we placed a lot of green spaces and connected that to the nature element of water.” 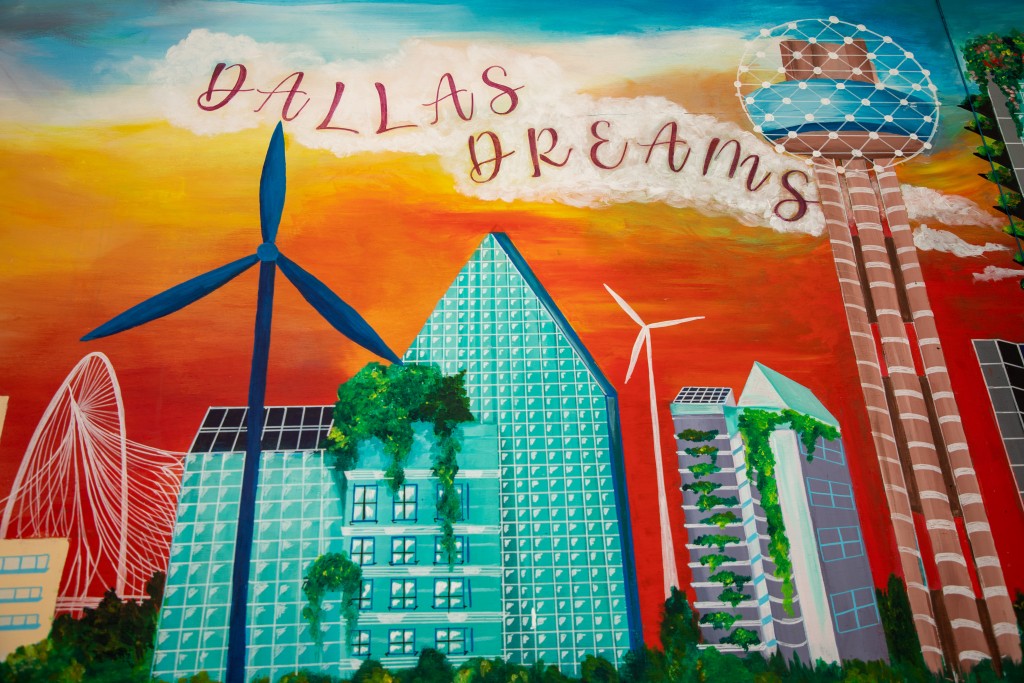 Almost all of the artists that worked on the mural were people of color, and Mar said it was a crucial part of the project.

“We’re moving into a generation of young people, and mostly brown and Black kids, really taking a lead, because they know that Black and brown and Asian communities are the ones that are mostly heavily impacted by climate change,” Mar said. “It’s a very empowering experience for them.”

People can stop and take photos in front of the mural. Pol said she wants passersby to contrast the city they see now with the future of a new, greener Dallas — and inspire people to create change.

“We’re all part of the city. And this is the future,” Pol said. “We have to take that sustainable path.” 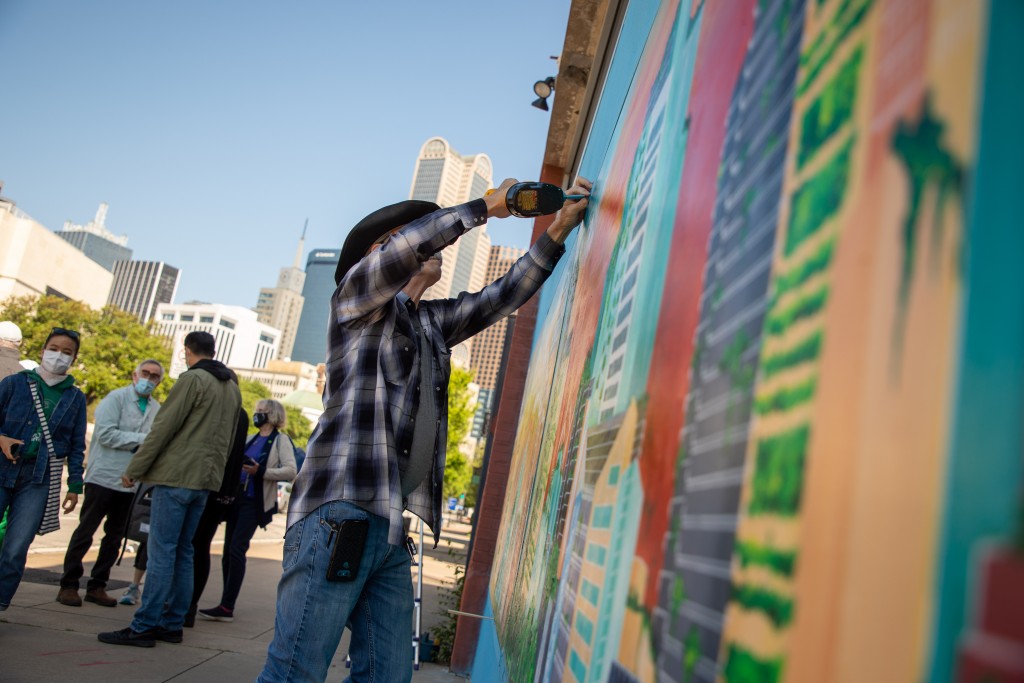 A member of the Climate Reality Project helps install the mural in downtown Dallas, across the Farmer’s Market, on April 18. Photo Credit: Keren Carrión.