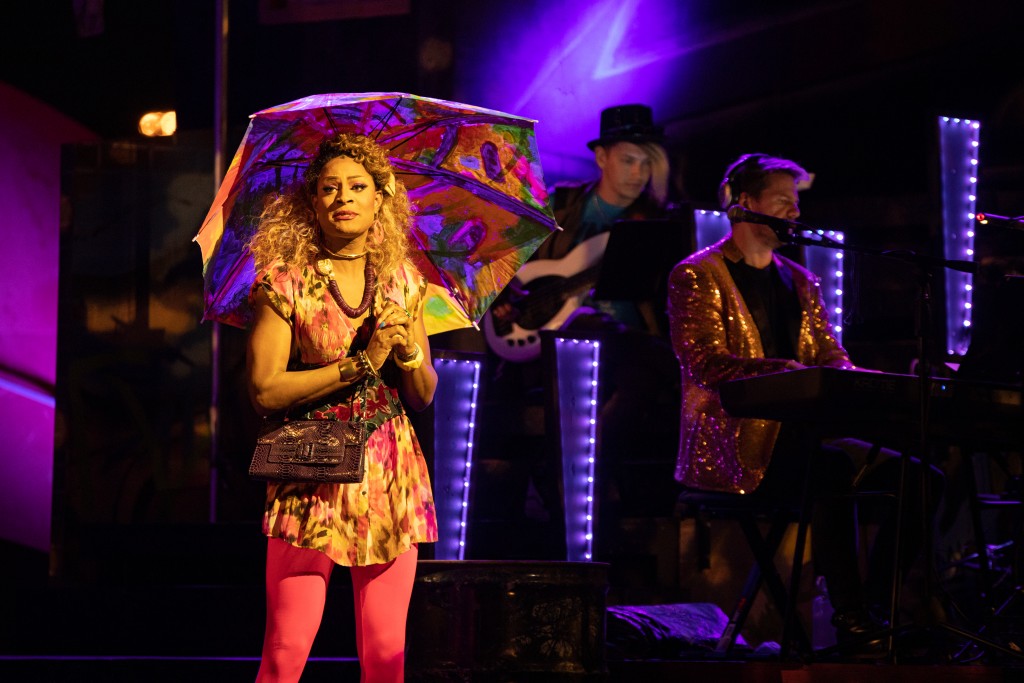 Theatre Three is wrapping up it’s month long run of “Little Shop of Horrors” this Sunday at Samuel Grand Amphitheater in Dallas.

The musical comedy is about a poor and meek floral assistant named Seymour who stumbles across a new breed of plant. He names it “Audrey II” – after his co-worker crush. At first, it looks as though the plant is the answer to all of Seymour’s problems, But as it grows, Seymour begins to realize the potty-mouthed, R&B singing plant is out for blood–literally.

Actor Lee Walter takes on the role of Audrey — a floral arranger and the object of Seymour’s desire.  Walter spoke with us about what it was like sharing the stage with giant plant, negotiating stairs in 5-inch heels and making the role of Audrey their own.

What was it like having an 8-foot-plant as a co-star?

It was awesome! That plant is ginormous! We had to do various rehearsals with the person who’s operating the plant to get the rhythm together where we get eaten and stuff. So it was kind of like a ballet if you think about it like that. It all just works together.

The set is amazing, but there are so many steps. There’s a flight of stairs you go up and down at least twice, and another group of steps in the front of the stage. How did you navigate the set while wearing 5-inch heels?

The shoes I wear in the show weren’t the shoes that were initially picked for the character. The heel on the shoes that were picked were much smaller. But the director, Joel Ferrell, was like, “you know, it’s Audrey. She needs a little higher heel.” But I’m used to wearing heels, so it wasn’t a problem for me running up and down the stairs. I didn’t really have to practice it at all. It’s just it comes naturally to me. I’ve been doing drag for 12 or 13 years now.

So besides the shoes, how did you mentally prepare for the role of Audrey?

I’m not going to lie. I struggled with trying to figure out how to play her and not do it as as everybody else does. And then getting in my head about with OK, what if they don’t like that? When we first started rehearsals, I would go home a little frustrated because I could not find a perfect place to put her. But then I talked to a friend of mine and he was like, you need to quit trying to play her as somebody and just play her as you. And I was like, OK, that just totally makes sense.

Is that where your identity for Audrey comes in?

Right. I’m transfeminine. And except for the abuse, I’m going through exactly what this character is going through. I’m coming to terms with my femininity and my identity, and I’m like, I can totally use that and put that in this character, so it’s basically just me. And so after he told me that, I was like, this is perfect then. And that just made everything so much easier.

The character of Audrey was originally played by a white woman. Pasadena Playhouse in Los Angeles cast gay and trans actors in the leads of their 2019 production of “Little Shop,” but, to my knowledge, this is the first time in Dallas, that a person of color who is also trans has been cast as Audrey. Your performance brought a whole new dynamic to the role. Can you talk about the layers you brought to the character?

I wanted to play her  as a trans woman because, especially in the climate now, a lot of black trans women are being killed. So it was like, it kind of fits the show. Because not just trans women of color, but trans women in general, have to deal with a lot of abuse from men, because some men still think that it’s not appropriate, so they’ll treat them how they want to treat them.

So I thought about that, and I said, “You know, I’m going to play her like this. I, myself, am a transfeminine. So I was like, that’s just works out. It works out perfectly. And I think that’s the layer that I brought to the show, because Audrey was written so specifically, and I don’t want to play her like everybody else has played her. I want her to be a real person. So I felt like that was the best way to do that.

Do you think by playing this character that it will shine a light on these victims? Or was that your intent to do that?

It was kind of a mindset and kind of not a mindset. We’ve had various audiences that were not enthusiastic about Audrey being hit or being talked to the way she was talked to. So they took it seriously. And then there have been audiences that have been laughing about it because it’s a musical comedy. But I feel like if someone comes and sees the show that is a trans woman or a trans man that they’ll feel like they’re represented and they feel like they can actually go out and audition for stuff as themselves. So yes, I feel like that was my intent.

After doing the role of Audrey, do you think that audiences in Dallas will be accepting of more roles like that? Like a trans woman being cast in Romeo and Juliet, for instance?

Yeah, I think Dallas is ready. I hope they’re going to start casting more this way because honestly, our world is so diverse and it needs to represent the community as well. Theater should represent what’s going on right now in the world, and I feel like this is the perfect time to do it.

This conversation was edited for brevity and clarity.