The Kimbell Art Museum has assembled 55 artworks from private collections and museums around the world to create its new show called ‘Early Monet.’ But these are not the famous, later masterworks by the great Impressionist Claude Monet. Local All  Things Considered host Justin Martin sat down with Art & Seek’s Jerome Weeks to ask why this exhibition would still interest fans of Impressionism and even specialists.

Jerome, I like pretty paintings as much as the next person, but this new exhibition at the Kimbell – ‘Early Monet’? Monet’s an Impressionist, so this must be the Kimbell’s third Impressionist show in two years?

‘Early Monet’ runs at the Kimbell Art Museum through January 29th
JWYep, there was that big show of Impressionist portraits, and there was the one on Gustave Caillebotte, a gorgeous show on the least-known Impressionist. And now this one on Monet’s early development as an artist. I admit I’ve grumped about how the Impressionists are the artist-radicals your grandmother loves. They do such lovely flower arrangements.

You mean they’re popular with people who otherwise don’t care much about art?

JWI mean they’re popular because they’re revolutionary yet comforting. They’re easy-access. But these Impressionist shows are something only the Kimbell can really bring us. It’s established long-term relationships with places like the Musee d’Orsay, the Paris museum that has such a great collection of Impressionists. And as long as Kimbell curator George Shackleford finds new ways for us to appreciate these artists, you have to recognize the real opportunities we’re being given. This show, Early Monet, has loans from nine countries, including Japan — and there are rarities here, works that have never been seen before in the US.

Case in point: ‘Early Monet’ brings together two fragments of an abandoned work. In exhibitions, we often see drawings for commissions that never came through for an artist, but in this case, these canvases are all that remain of a hugely ambitious work that Monet simply couldn’t finish in time for a Salon in 1865, so he gave it up. Calling them ‘fragments’ doesn’t do justice to one, nearly 14-foot tall section of ‘Le dejeuner sur l’herbe’ — which was rolled up, forgotten and badly damaged. Both pieces belong to the Musee d’Orsay but are not usually included in a typical Impressionist or Monet exhibition, so it was a surprise to see what is, all at once, a fascinating oddity, an impressive piece of unfinished work and a lost shot at early fame for Monet.

So what’s the show about?

JWI’ll let Shackleford explain: “The goal of the show is to provide you opportunities to see Monet trying and experimenting and thinking through his strategies for moving forward – and it’s not always linear.”


If people know art history, they know it’s Monet’s little painting from 1872 of a foggy harbor at daybreak that gave Impressionism its name and helped ignite a furor. Monet titled his painting as an afterthought — he thought of the painting more as a sketch, so he gave it a generic name: ‘Impression, Sunrise.’  A scornful critic used that title to dismiss this “gang” of younger artists. They couldn’t really paint, they were just splashing their ‘impressions’ onto canvases. 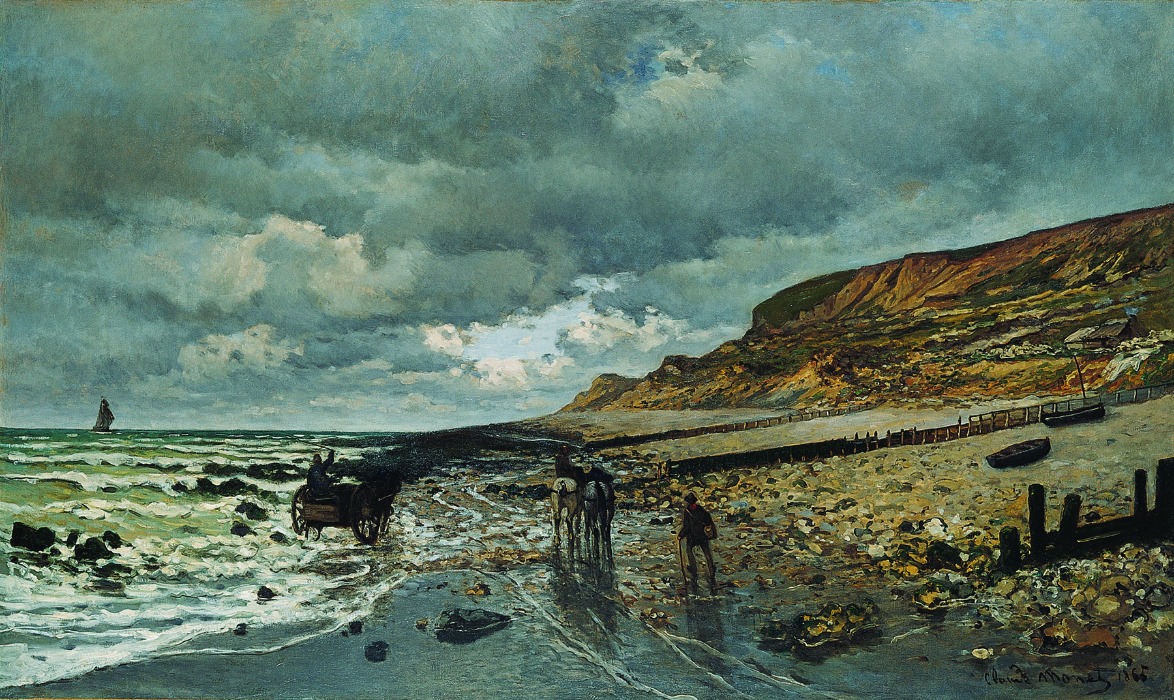 So that’s when it all starts?

JWNo, not at all. This show leads us up just to that breakthrough. But Shackleford’s point is that artists get lost sometimes, they make sudden leaps in their thinking or they even retreat, re-think. Monet didn’t flick on a light switch and, boom, he’s an Impressionist. Look at this early work, Monet’s first to be accepted by a Salon. It’s one of the Kimbell’s own Monets; he painted ‘La Pointe de la Heve’ when he was only 24-25.

So what do you see?

JWIt’s extremely realistic, right? You can practically count the rocks on the beach. And despite the naturalism — the gloomy sense of isolation and poverty to the people picking over what’s washed up at low tide — there’s almost a lyrical quality to the sky, the sea and the bluff, the way they all mix blues and greens, whites and browns.

Now look at this, painted only four years after that beach scene. It’s ‘Bathing at La Grenouillere,’ La Grenouillere was a popular boating and bathing spot on the Seine river. If I asked you — and you’d never seen this before — what style of art is it, what school, what era, what would you say?

I’d say Impressionism. There’s that soft focus, the kind of dappled brushstrokes with what looks like a sponge.

JWExactly. Look at the detail of the bathers in the middle distance there. What’s Monet done with them? 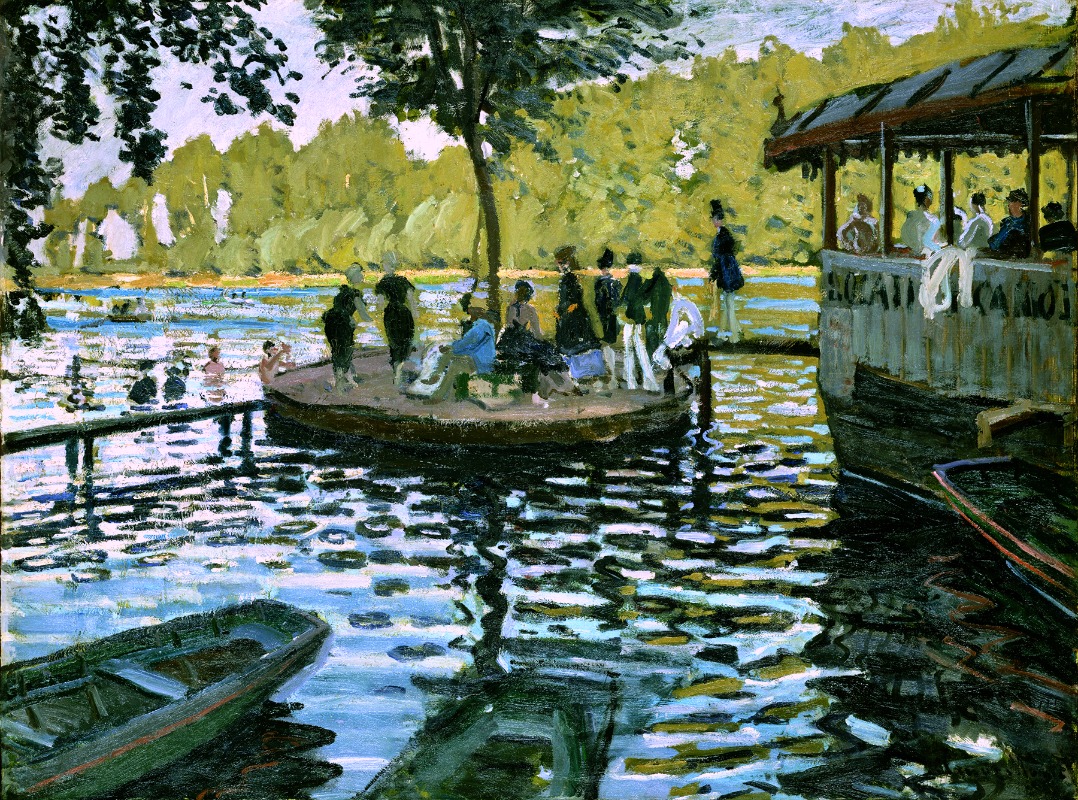 There’s not much detail. He’s broken them up into just flicks and dots of paint.

JWRight, he’s dematerializing them, they’re just light and color. You can barely even tell who’s male or female in much of this picture. Yet this is three years before Impressionism supposedly took off, before ‘Impression, Sunrise’ in 1872. But he’s already caught that incredible shimmer and flicker of sunlight through trees on rippling water. Step back the right distance from this painting and you’d swear it becomes liquid.

But then, what’s even more surprising, the same year he painted ‘Bathing at La Grenouillere,’ he painted a still life of flowers and fruit.

JWIt’s completely realistic. Completely conventional. Those pears and grapes look solid enough to eat, and each flower petal is so carefully picked out. Yet those solid pears and Monet’s disintegrating bathers were painted only months apart.

Kind of, yeah. But he kept obsessively mucking about the same things. It’s amazing to see that at 17, he’s already painting water scenes and sunlight through leaves and trying to capture changing clouds. He instinctively was drawn to these scenes and he will keep working on these same subjects, taking them apart, re-seeing them, re-thinking them for the next 50 years. That’s why ‘Early Monet’ is so revealing.

Here’s Shackleford: “There’s already an obsession with atmosphere, with how the air close to you looks different from the air far away. There’s already a fascination with reflection, which is surely one of the great constants in Monet is to see how do you paint reflections, how do you paint the surface of water. If you follow an idea like that through this show, it’s enormously rewarding.

He’s right. It can be. For instance, Shackleford has grouped paintings by themes or subjects but also in a loose chronological order — so we see how Monet treats boats and ocean waves or Paris street scenes next to each other. And it becomes apparent how life-changing Monet’s visit to England and Holland in 1870 was. It’s not simply that he got to see paintings by J. M. W. Turner and James Whistler or that he met the dealer Paul Duran-Ruel who would boost his career. 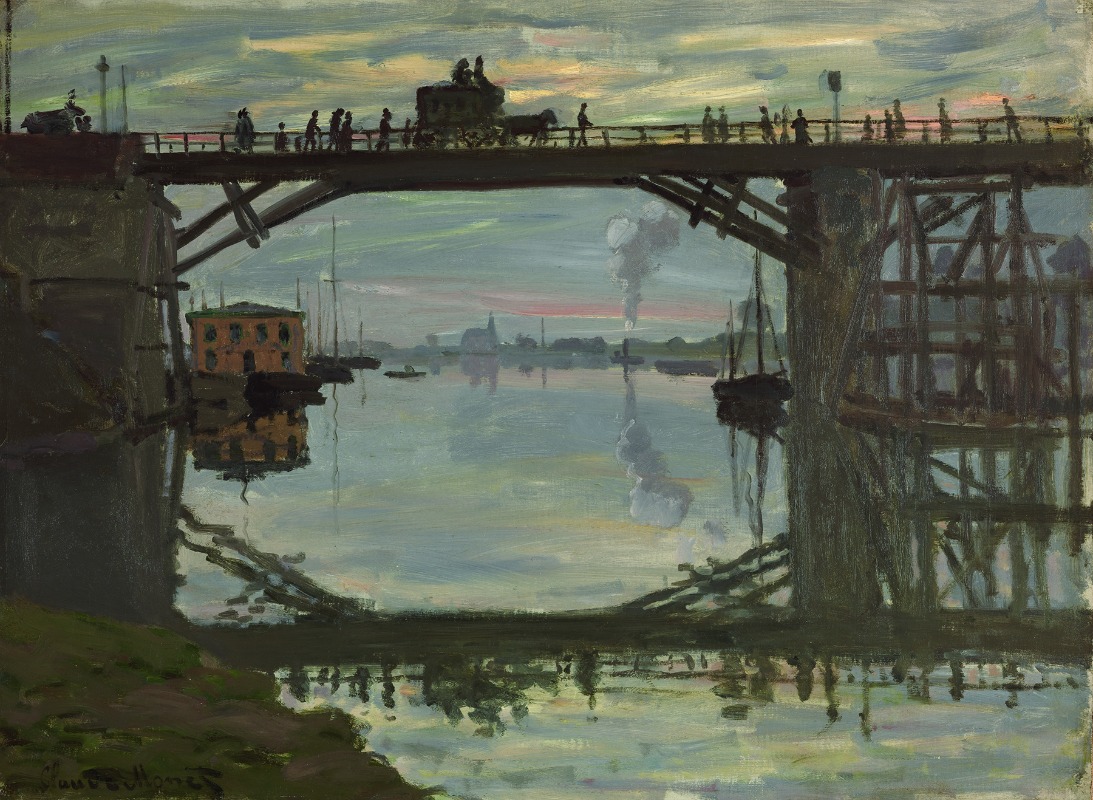 London was the first time Monet was entirely out of his element. He didn’t know the city, didn’t know the language, didn’t know many people — and here, he’s plopped down in the foggiest, smoggiest, most industrialized city in the world. No wonder haze and the disappearing edges of distance and mist begin to pervade his work — just as mechanical evidence of 19th century modernity begins to show up.

After that, Shackleford says, you’re always seeing trains in his work — especially in his tremendous series on the Gare Saint-Lazare, when he dissolves an entire, giant train station, steel girders and locomotives and crowds, with billows of smoke and steam. But even in his country scenes out at Argenteuil, there’ll be a little steamship puffing down the river somewhere or a train crossing a bridge — he always likes putting them in, Shackleford says, “because he’s found fumes are so beautiful to paint.”