Skip Navigation
Home > ArtandSeek.net > We’re Out Of The Arts Venue Blues – And Into Blackhouse

By day, Noel and Sara Viramontes  are typical working parents. At night, they transform their home in a funky neighborhood into Fort Worth’s newest intimate arts venue. They host gallery openings, live music – even plays. This week, the Art & Seek Artist Spotlight sh ines on the couple behind Blackhouse.

On this particular Friday night, friends and families gather at tables in the gravel backyard behind Noel and Sara Viramontes’ house. Drinking, talking, eating. You can see downtown skyscrapers twinkling in the night sky, just a few blocks away. The Viramontes do a lot for these evenings to work: book the DJ, hire a taco cook, give visual artists a place to show their work or offer a stage for musicians and actors to perform. But Fort Worth videographer Austin Crow says what’s unfolding right now, this is what Noel does best. 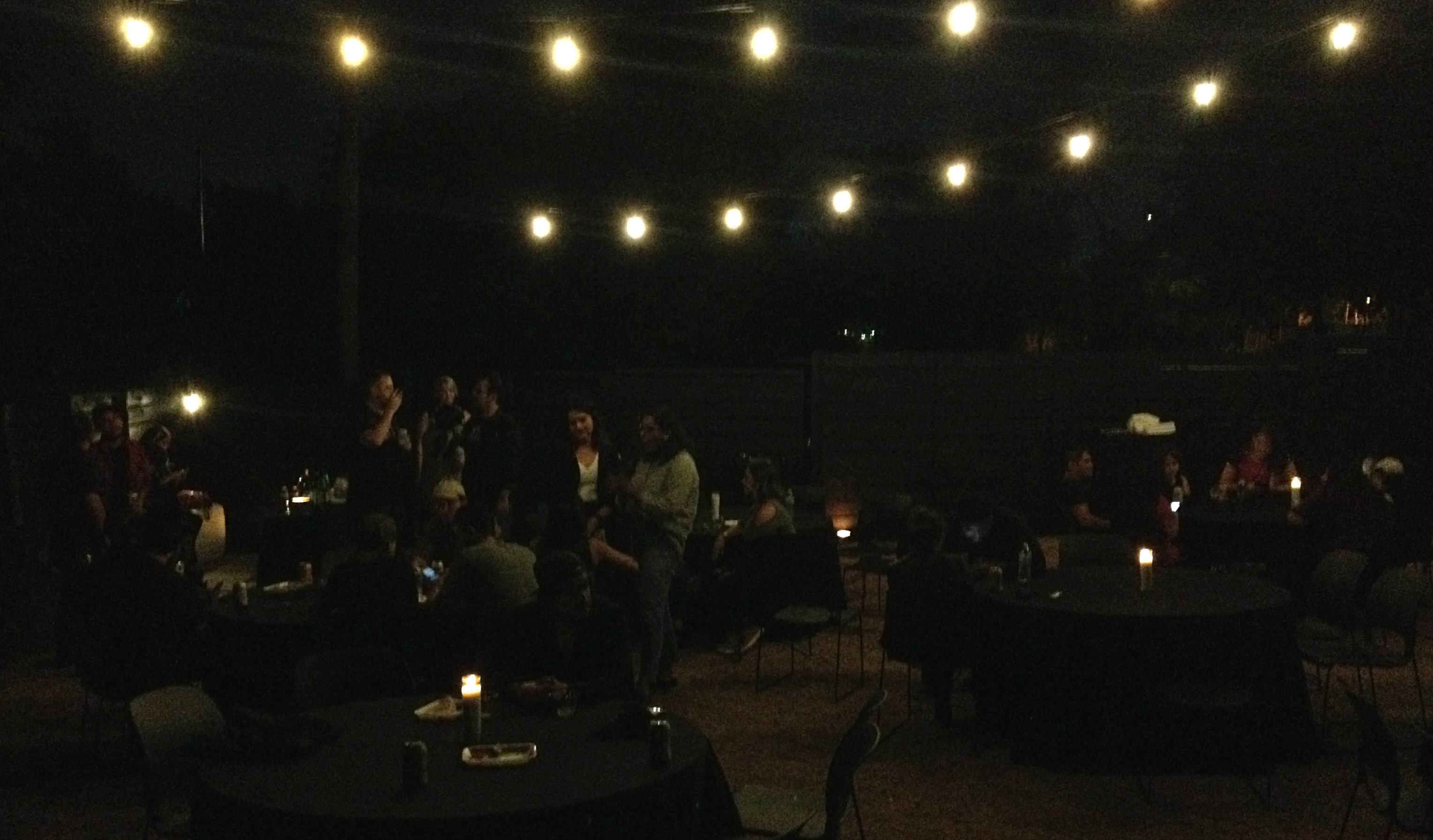 Backyard at Blackhouse. Yes, in the not-so-distant distance, a couple of those lights are downtown Fort Worth skyscrapers. Photo: Jerome Weeks

“He doesn’t necessarily do art in the way that people would go to a museum and see,” says Crow, who’s shot videos for Blackhouse. “But he brings people together like no one I’ve ever seen. I’ve never felt like a part of a community more than coming around here.”

In their mid-30s, the Viramontes have been stoking a younger arts crowd in Fort Worth. They’ve given it a venue and a place to meet. Their openness to the arts has created a kind of mellow gravitational field at Blackhouse.

And filled a need. Last year, in July, artist Guillermo Tapia had arranged a show elsewhere when those plans suddenly fell through. Sara says he called, telling them, “‘Hey, they cancelled on us. Can we have it at your place?’ Like, ‘Yeah! That’s why we did this!’ And that was our first event.”

That’s why we did this. 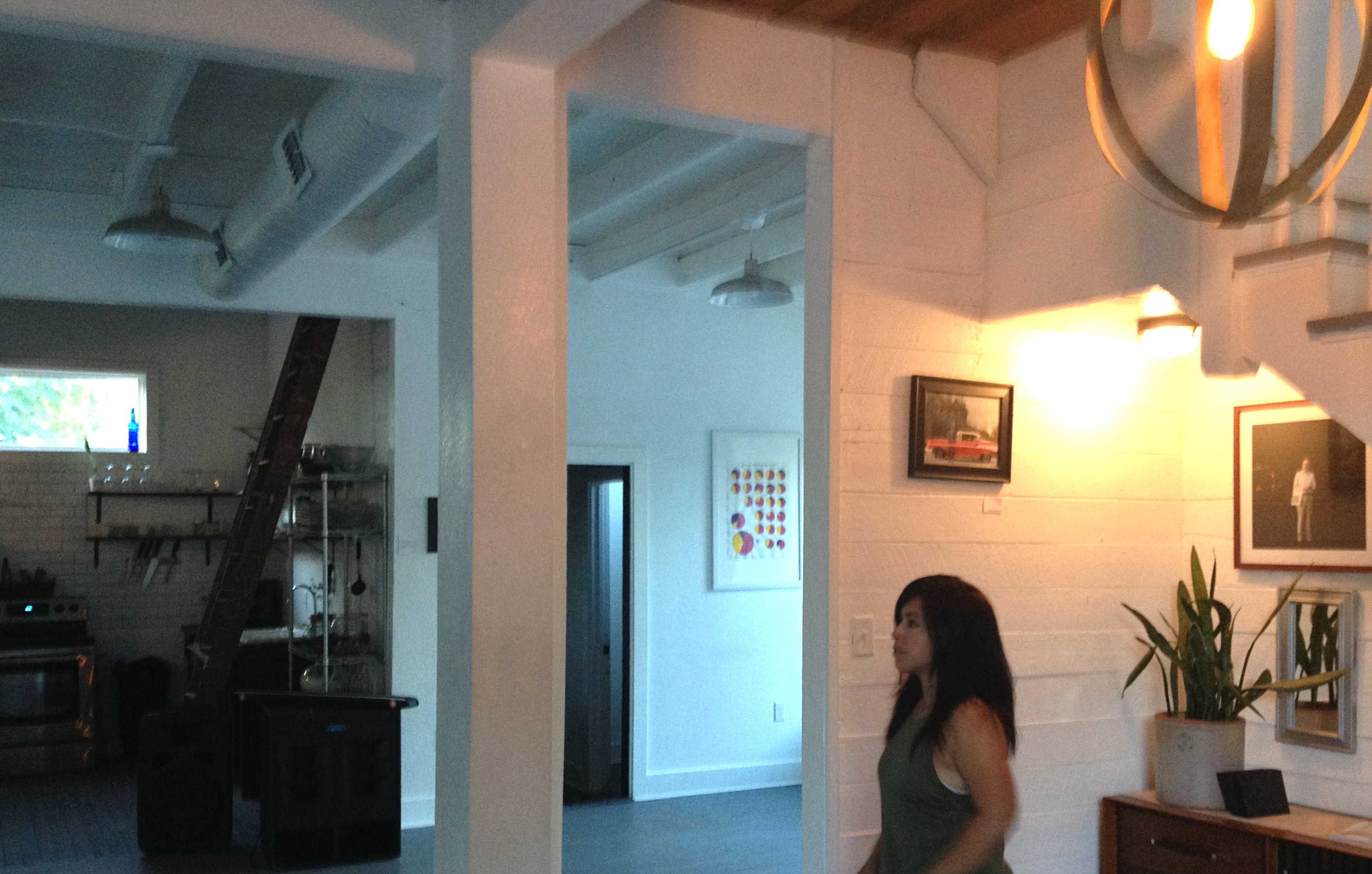 “We basically stripped down the house to bones,” says Noel. “All siding, everything. And put everything back together. We essentially did five years’ hard work.”

Sara chimes in: “We pulled all-nighters trying to clean up the walls, and splinters in our hands, hot summers.”

Then, they painted the entire house satin black. Because – black’s a cool color. And on this big, old house, black makes a big, bold statement. You drive by, the place is hard to miss. Sara says when they went to the paint store, all she and Noel said was, “Give us your darkest black.”

But what the Viramontes did to make the house an arts venue was keep their living quarters upstairs. On the first floor, they ripped out all the walls – living room, dining room, hallway, even the kitchen – to create one big, open space, painted white. Like an art gallery. Or a small nightclub. 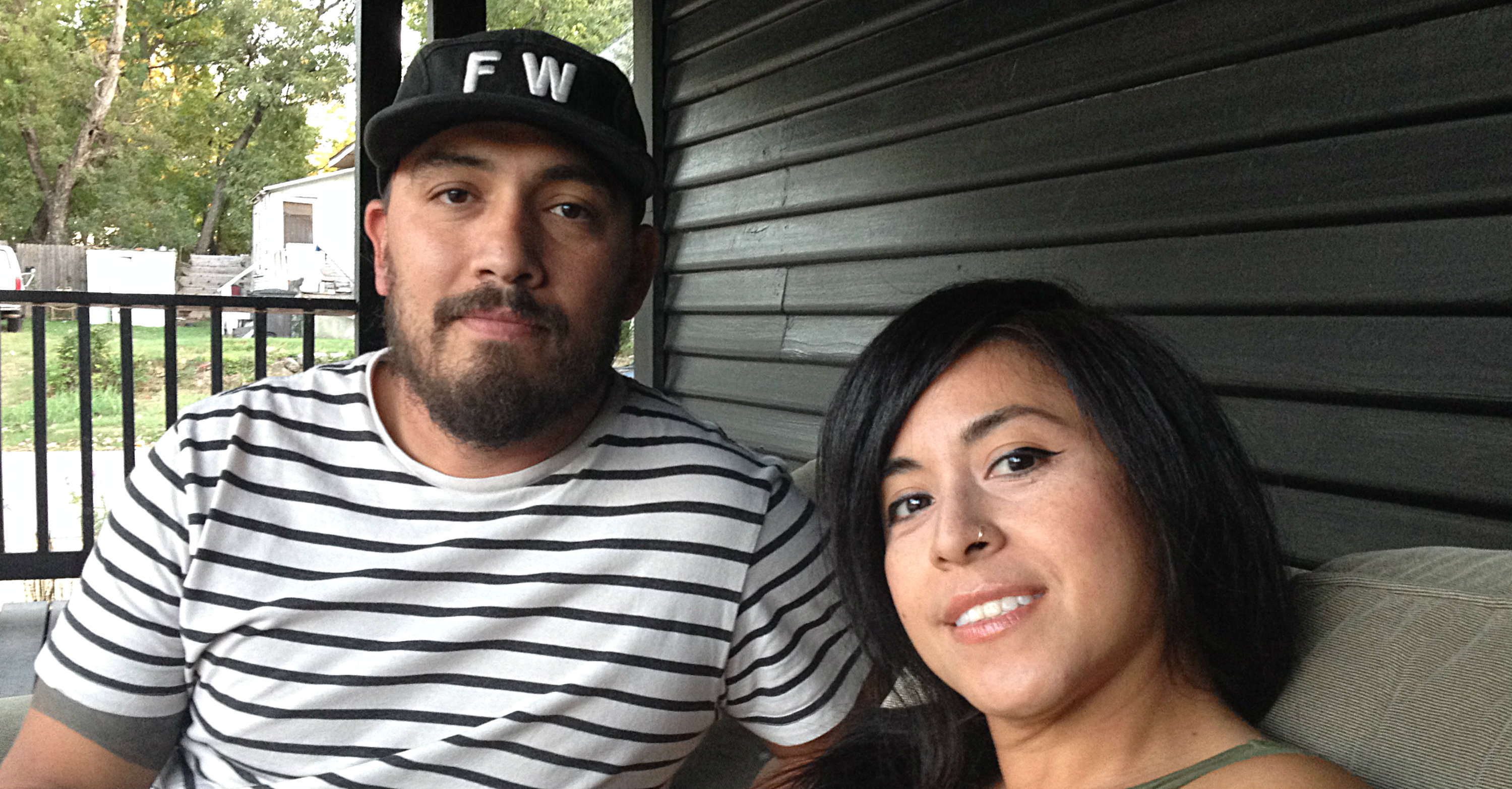 Noel and Sara Viramontes on the porch they built on to the front of their home, Blackhouse. Photo: Jerome Weeks

And last summer, after that first show at Blackhouse –

” And we’re still trying to figure it out,” says Noel.

“We’re so busy,” adds Sara. “We get emails on the daily. And we’re trying to be parents and do PTA and work full-time.”

Noel works maintenance for a church. Sara’s a full-time mom with their two kids at home. In their first year running Blackhouse, one thing they’ve figured out: Blackhouse caters to different crowds. The early gathering of families drifts out. By 10 pm, a volunteer mans the door to collect $5 from newcomers. (Volunteers from different Fort Worth arts groups often help out.) Noel says they’re not getting rich on the cover charge. It just covers their expenses.

And then the after-party kicks in with Dallas DJ Blue the Misfit.

Hearing all this, you may wonder: An arts venue drawing crowds in a residential neighborhood, with late-night parties and beer and live music? Where’s the fire marshall? What about zoning?

First, the Viramontes don’t sell liquor. So they don’t need a license. The beer is donated by Cowtown Brewery. 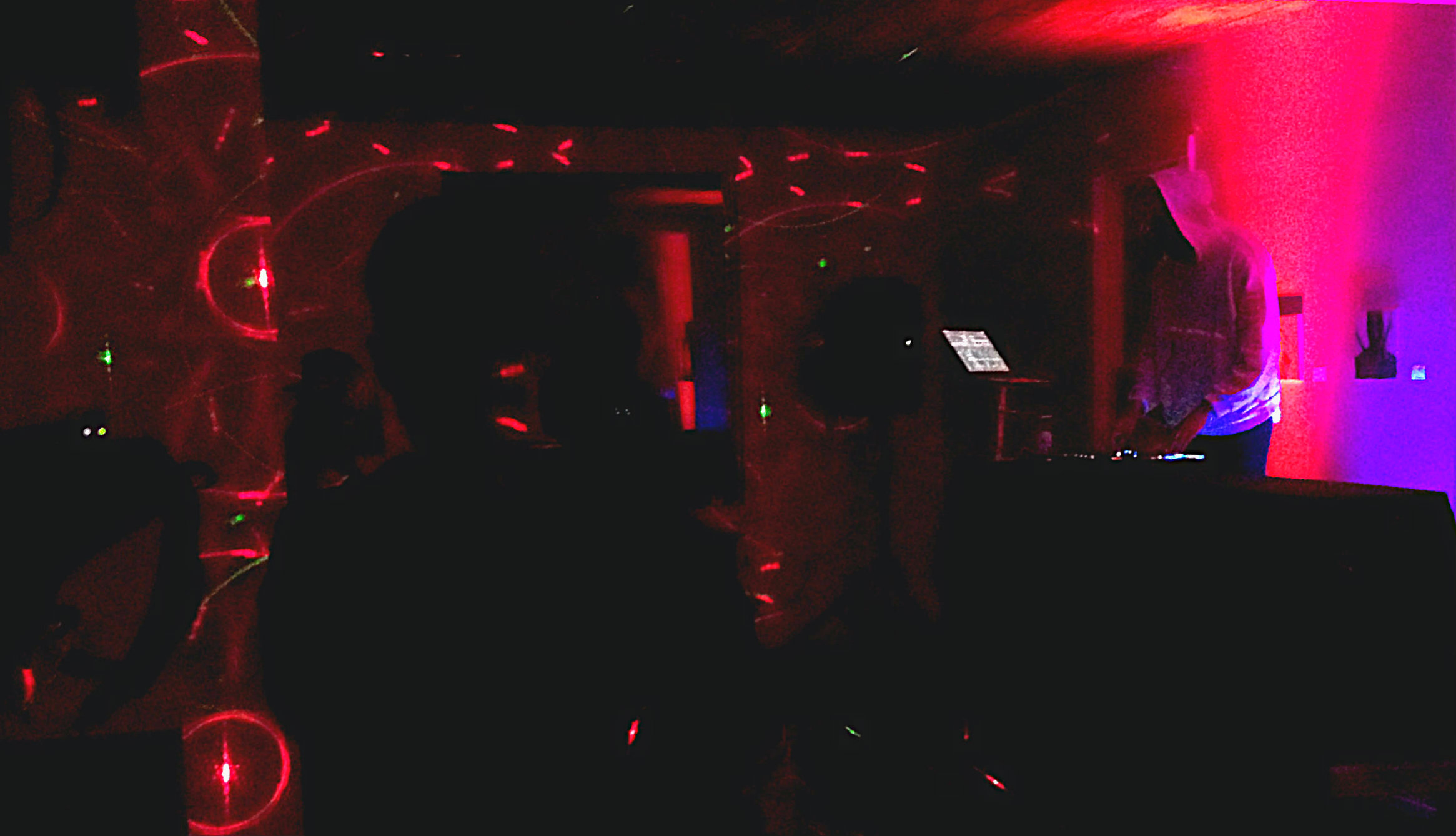 Second, Rock Island is an unusual neighborhood. It was created more than a hundred years ago mostly by African-Americans working on the Chicago, Rock Island Railroad. Remember that train horn while the Viramontes were talking?

Train tracks have always bracketed Rock Island on either side, isolating it. And when Noel went to get building permits, he discovered something else about the neighborhood he’s lived in since he was 10 years old.

“It’s zoned in different pockets, and some of these are residential, but this corner is medium industrial. And that’s why we can have a restaurant a block away that’s commercial.”

And remember that brewery? It’s only two blocks away. You can hear the downside to such zoning — right next door to Blackhouse, every 45 minutes, a train rolls by, honking and clacking.

The Viramontes have a knack for connecting artists, making friends, “keeping the movement going,” as Noel says. They’ve even put their art party on wheels. Last month, for Fort Worth’s annual Gallery Night, the couple rented two buses. They partnered with Art Tooth and brought artists and art lovers together at Blackhouse, then toured the galleries, drinking and socializing.

“This is what people want to do!” Noel exclaims. “They love the art. But what’s Gallery Night if I’m not going to be with the artists? I mean, we sold out two buses. I think we can do a lot more.”

They probably can. The Viramontes are already mixing local bands with music acts who’ve asked to come in from LA – like Andy Davis, who’ll be here Oct. 22nd. The couple is planning to build a backyard stage. And they may even break out some more black paint. The Viramontes never had a chance to ‘open’ Blackhouse: It just started up. So the party tonight is to celebrate its official launch. It’s no longer FW Blackhouse because the couple hope — eventually — to launch more Blackhouses. In other cities.