Skip Navigation
Home > ArtandSeek.net > What Is ‘Truth’? And Can We Find It At 24 Frames Per Second?

The Dallas Museum of Arts’s exhibition “Truth: 24 Frames Per Second” touches on everything from 16 millimeter film to virtual worlds. I’ll be leading a State of the Arts conversation about the exhibition Thursday called “New Media and the Future of Art.” And so I sat down with Anne Bothwell, KERA’s Vice President of Arts, to talk about how new media can reveal new truths.  This is our expanded conversation.

State of the Arts: New Media and the Future of Art at the Dallas Museum of Art’s Horchow Auditorium, Thursday, 7 p.m., January 25th. $5.

Jerome, twenty-four frames per second generally refers to film-making. But your State of the Arts panel Thursday at the DMA is called ‘New Media and the Future of Art.’ And film-making doesn’t exactly sound like ‘new media’ to me these days.

Right, I think the title of the show is something of a provocation — in our age of media and ‘fake news.’  A better way of thinking about the exhibition is “presenting 60 years of artists working with moving images in all these different forms: TV news footage, videos, videogame technology, YouTube videos. The exhibition is not strictly chronological, but it does more or less begin with 16mm, black-and-white film and ends with things like a giant digital wall. In fact, this is the first major DMA show to deal with all these new media, all at once.

And there is a lot of it. There are works from 24 artists, they’re all from different countries. They’re all dealing with different topics. There’s race, there’s censorship, even the media itself.  Why tackle all of these things at one time? 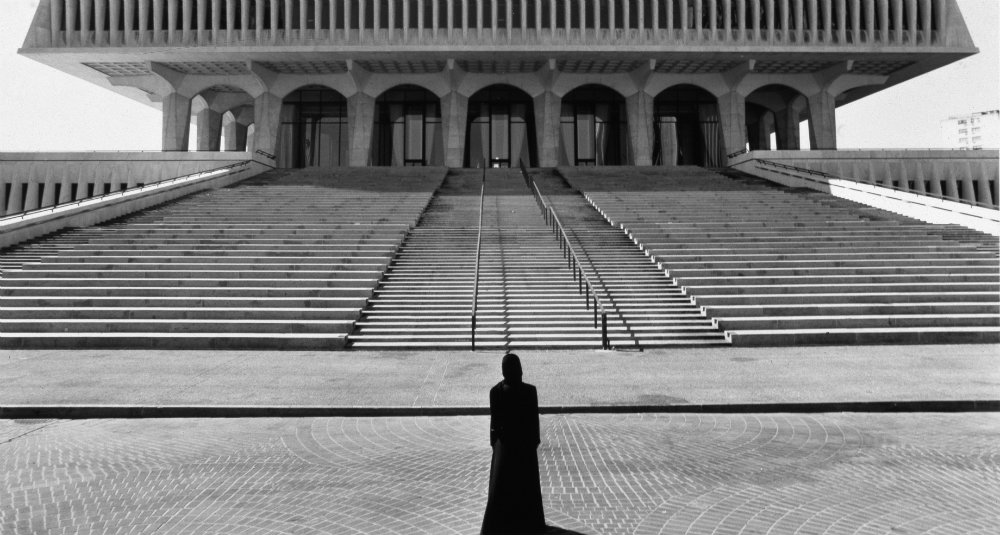 It’s a good question. I talked with two of the panelists: Amber Bemak, a media artist who teaches at SMU, and Elena Torok, an assistant conservator at the DMA. And we agreed, there’s no, big, easy postcard theme to take away from the exhibition, but there’s a lot of strong, connective tissue throughout.  Documenting history, for example. Who owns or controls political history? One incredibly complex, multi-screen video installation –“Tiananmen Square: Break in Transmission” by Dara Birnbaum — captures the moment the Chinese government cut off all TV news, even American media coverage, of the student uprising in Tiananmen Square in 1989. There’s also Willie Doherty’s ‘Ghost Story,’ about the lasting influence of the Irish ‘troubles’ even on the Irish landscape itself — a film short, spoken by actor Stephen Rea, which the DMA had exhibited in 2009 as part of a one-man show on Doherty. (Watch the THINK TV interview with Doherty here.)

Or there’s the opposite question. What is truth? Since the beginning of documentaries, we’ve asked, what’s ‘really’ real and what did the filmmaker set up? What exactly are we looking at and why?  John Gerrard, a digital artist who’s going to join us on the panel, he has a work in the show called ‘Western Flag’ and it’s fascinating. It’s this wall-sized, black and white video that looks like a 360-degree pan of Spindletop.

And Spindletop is the famous oil well that had the big gusher — way-back in the early 1900s.

Yeah, it’s the one that pretty much created Texas’ oil and gas industry – and really, it kickstarted our entire modern world of cars and planes and cheap energy. Only this is what that spot looks like today. And it’s kind of flat and barren. But that’s not what you’re actually looking at here. You’re looking at a digital simulation on an LED screen. I stood in front of it with John Gerrard. 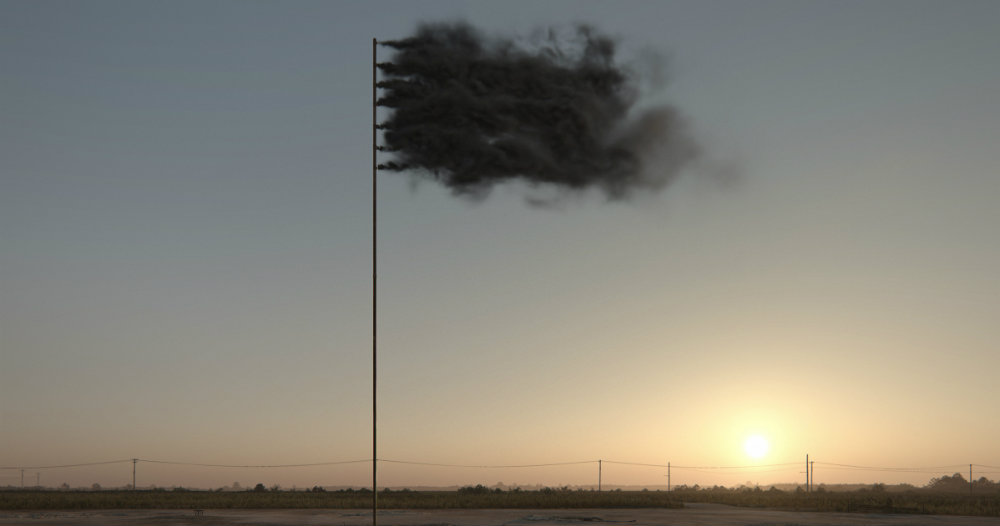 “It’s like a type of sculpture,” Gerrard said. “So, say that little pipe there on the left. I mean, we took a picture of it and we built a portrait of it in 3D, so it’s a three-dimensional representation of what was there in reality, but it’s in virtual space. So if you play virtual games, you know, traveling through virtual worlds, this is the same technology. This is a game-engine-based world.”

Why would he do that? Why not just take a video of it?

Well, in the center of this giant image is a very tall, thin pipe which has smoke coming out of the top, and the smoke looks like a flag. Hence, the name ‘Western Flag.’ But that pipe doesn’t exist and smoke doesn’t behave like that. Gerrard created it so we can see some of the greenhouse gases emitted by oil production, gases we normally can’t see. ““You know,” he says, “you’ve got the raw material coming out of the earth, and then during the refining process, you’ve got enormous clouds of invisible carbon dioxide being released.”

So it’s an environmental statement.

And … Gerrard is making the invisible visible. … He’s created a very real-looking ‘fake’ video to show us a truth we normally couldn’t see. That’s pretty ‘meta.’

Well, as I said, the show is rather provocatively called ‘Truth.’ In fact, Gerrard’s virtual simulation is so “real”  if you sat there long enough, you could watch the sun rise and set, and you could watch a whole year go by with the nights getting longer and shorter.

Who even gets to tell a story is a political issue. To quote Susan Sontage’s famous essay, ‘On Photography’ – “To photograph is to appropriate the thing photographed. It means putting oneself into a certain relation to the world that feels like knowledge — and, therefore, like power.”

But Amber Bemak, the SMU media artist, made an interesting, even fundamental point. She said, just the artist’s choice of video or film has been viewed as political. When affordable camcorders first came out, video was like ‘the people’s art.’ Film was costly, film was for big, white, corporate studios and networks. Video, on the other hand, was cheap and quick, video was accessible and inclusive.  But now with YouTube and smartphone videos, video has become so commonplace, she sees artists going back to film. Even as many artists are exploring extremely high-tech, multi-input virtual worlds, film feels labor-intensive and therefore “more difficult,” trickier, less easily or minutely controlled, less perfect. Film can seem ‘artier.’

With all of these different kinds of media, that has to be a real headache for curators and folks who are collecting this new art.

Well, Elena Torok, the conservator, said that this show was a huge challenge for them. We’re talking about needing 16mm projectors, VHS recorders. Preserving these kinds of work — and translating them to new formats while being respective of the artist’s intention and being able to display them all like this, it was such a complicated show, it exists in two separate galleries.

I imagine that’s going to be complicated for conservators moving into the future, too.

Yes. One of the central issues for new media is archiving it — preserving it.