Skip Navigation
Home > ArtandSeek.net > What Would You Do For Love?

What would you do for love?

ArtSmarter Prize 2016 is Friday at 7 p.m. at the Cris Worley Fine Arts Gallery

Would you be willing to manipulate someone like in the film “Amélie?”  In “Amélie,” the main character sets up an elaborate trail of clues in order to ask out the guy she’s fallen for.

Or would you put yourself in harm’s way? Think Westley from “A Princess Bride.” Westley defeated a swordsman, a giant, a genius, death itself, and an evil prince all in the name of love. And he maintains his sharp wit through all of it.

Maybe you’d pull a Patrick Verona from the 1999 film “10 Things I Hate About You” and try to serenade your way into someone’s heart?

A group of artists will tackle the question at ArtSmarterPrize 2016, a one-night exhibition/auction/trophy giveaway that will poke fun at the art world at Cris Worley Fine Arts this Friday.

ArtSmarterPrize 2016 is the creation of artist Christopher Blay‘s alter ego/performance art character Frank Artsmarter. He’s getting some help from Glasstire, the non-profit Texas art web site. The theme – What Would You Do For Love? – is meant to “encourage the artists to pander to the judges,” says Artsmarter. He also says it’s important for the artist to think about what they might do for romantic love as well. There are 18 artists participating. Some have made videos to address the evening’s big question. Here’s one example; there are more on Glasstire.

ArtSmarterPrize 2016 was created to mimic ArtPrize Dallas, which had been planned to premiere this Spring. As D Magazine explains, “ArtPrize is a kind of free-for-all that allows anyone to enter art work into the festival. The public then votes for the pieces they like the most, and the art with the most votes wins a hefty pay-out.”  ArtPrize got its start in Grand Rapids, Mich., where it is a successful event. But  ArtPrize Dallas never caught the traction needed to bring the concept to Big D. That didn’t stop Frank Artsmarter from deciding to continue with his funhouse-mirror version of the event.

So, just as they would have for ArtPrize, artist have submitted their work for ArtSmarterPrize 2016. And the public will get an opportunity to view it.  There will be a silent auction – bids start at 50 cents – and the artists will get to keep 100% of their earnings. But, unlike ArtPrize, the winner of ArtSmarter Prize 2016 just receives a trophy.  Actually, all of the artists might receive trophies. Frank Artsmarter and his guest jurors, Cris Worley (Cris Worley Fine Arts) and Danette Dufilho (Conduit Gallery), will deliberate on the entries and choose the winner.

If you’re still with me after all of that, you might be wondering who Christopher Blay is, why he needs an alter ego and why in the world he dreamed up such a farcical event. (I know I was.)

Blay, who lives in Fort Worth, was trained as a photographer, but has been focusing on installation work and public art. He told the Dallas Observer that he’s “obsessed with images and even though I don’t want to add more images into the world, I want to reflect on images because they’re everywhere.” An example of Blay’s reflections might include an ark he created on Noah Street in Oak Cliff that stood for 40 days and 40 nights. Doors from abandoned homes in the neighborhood covered its exterior. (Learn more here.) 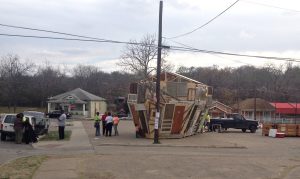 Frank Artsmarter exists to poke fun at the sometimes stodgy art world. And Artsmarter’s jokes come out in a variety of ways. There’s this ArtSmarterPrize of course, but he also has these “infomercials” where he talks about viewing, buying and creating “Art the Smarter Way.” Artsmarter is also quite clever with the written word. An example of this can be seen on his most recent post on the Facebook event page for  ArtSmarterPrize 2016 in which he does his best Donald Trump impersonation and declares that “The ArtSmarter Prize wants to take our art back.” Behind the tomfoolery though looks to be a message about the way art – and artists – are treated. Artsmarter/Blay is tired and frustrated with arts prizes. He wants more respect for art and for its worth to be more than what an award says it is. If you’re of the same mindset, then perhaps you’ll enjoy ArtSmarterPrize 2016.