The Aronson Cello Festival kicks off at SMU this weekend, so it felt like a good time to check in with Jennifer Humphreys. She’s a cellist with the Dallas Symphony and she’s also giving a master class and performing at the festival on Sunday. For State of the Arts, she sat down with me to talk about her passion for the instrument. You can click above to listen to the conversation that aired on KERA FM or read excerpts below.

What is so special about the cello?

I’ve always felt the cello is just one of the most personal instruments. Its physically, of course, we’re practically hugging it when we play it. It involves our entire body and so you feel super physically connected to the instrument.

And in addition to that, the range that we get to play in is very similar to that of the human voice. One of my teachers in school would always emphasize the importance of trying to play like a singer and listen to singers so we could imitate that. So I feel like it is a very human, very personal instrument to play. And I’ve felt connected to it since day one and I love it.

Yeah, the cello can be so beautiful but also very intense and sometimes pretty dark. We get the pleasure of playing a wide variety of roles.

Tell me a little bit about your cello. 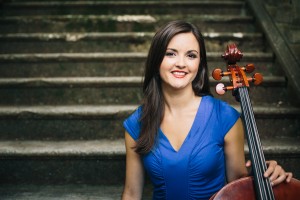 My cello is a modern instrument. It was made in 2004 by a maker named Boris Sverdlik. I bought it directly from him, which is really special. A lot of times you don’t get to work directly with the maker. One of the fascinating things about my instrument is that he was working in Cremona at the time and they were tearing down an old building. And the maker was able to get his hands on some the roof beams from this building that was probably hundreds of years old and they were these massive pieces of wood. Most cellos, if you look closely, you can see that the back is actually two pieces of wood. You can see it split and it is lined up right in the middle. My cello is actually a one piece back because he had this unusually large piece of wood and it’s old wood. So I think it is really special that it is a new instrument, but made with old wood, so it has a special soul.

The cello is having a bit of a moment in popular music. What do you thing about that?

I think it’s fantastic. I see cellists being used all the time now. I know Ed Sheeran, you know, I see lots of music videos he has a cellist that travels with him. Gregory Alan Isakov has a cellist that travels around with him and I think it is fantastic. You know, I felt when I was in school, when I was in junior high, you know, I felt like a huge dork carrying this giant instrument on my back down the hallway. But instruments like the cello that are popping up in more of the pop music scene, you know, might show people, “hey this is really cool. You should come check it out.”

With technology and all of the things competing for our time today, attention spans seem shorter than ever. Does that impact classical music?

I think it does in the sense that we’re so used to information being presented to us in these tiny little clips or sound bites or videos where most symphonic works or least the majority of our repertoire takes time to evolve and takes time to make it through this journey. And a lot of people aren’t used to that taking so long. Classical music is in a way while it can embrace technology and a lot of the new ways of recording and spreading our art you know that are evolving today it’s also a good antidote to the constant bombardment of information during the day that you can just turn it all off and just like close your eyes and listen and let this sound just wash over you and take you on this journey.