Art&Seek is highlighting new music from North Texas every Thursday. Click above to hear me talk with vocalist and guitarist Ryan Taylor for our Music Minute, which airs on KERA FM and KXT 91.7. For more North Texas music, tune in to the KXT Local Show at 7 p.m. on Thursdays. And tell us what you’ve been listening to on Facebook, Instagram or @artandseek on Twitter.

Ryan Taylor is no stranger to the North Texas music scene; he was the guitarist and frontman for rock group Oil Boom until the band played its last show in 2018. 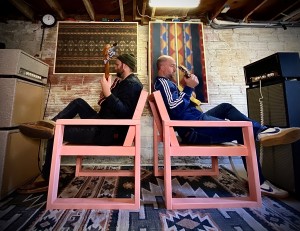 It was through his former band that Taylor met Kenny Wayne Hollingsworth –  guitarist for Leon Bridges and member of another North Texas favorite, indie-country act, The Orbans. The two ensembles shared a rehearsal space and Taylor and Hollingsworth became friends.

“We just always had in the back of our minds that at some point we would start a project together, and for whatever reason, it never materialized,” Taylor said.

That all changed when Taylor sent Hollingsworth some demos he was working on. The two decided to collaborate and Yeah Huh was born. Yeah Huh played one show with a full band at Shipping and Receiving Bar in Fort Worth and then Covid hit.

“The pandemic happened and everything just ground to a halt. We just kind of hit pause for a little bit.” Taylor said. 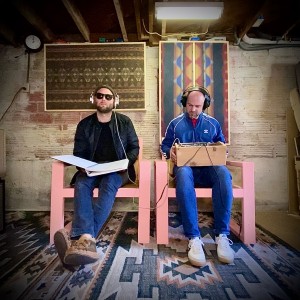 The pandemic made Taylor and Hollingsworth revamp before they even really got started, and Yeah Huh became a duo. Taylor had recently started dabbling in GarageBand and would send Hollingsworth song ideas. Hollingsworth would then build on those ideas and the two musicians started collaborating virtually by creating songs through the internet.

Eventually, they had enough material for an EP. Will Hunt from Spaceway Productions in Fort Worth added drums to the songs and mixed them down and then Yeah Huh’s debut EP, Initials, was born.

The debut single off of Initials is called “Fine I’m” and features a fast-paced guitar riff.  Taylor said he used that riff to try to build a song as an homage to the psychedelic sound of the late ’60s. The lyrics tell a different story.

“It’s just kind of about a nervous guy pursuing someone and he’s so nervous that he says ‘fine I’m’ instead of ‘I’m fine’.” Taylor said.

Initials has three tracks total and the album art features a fantastic picture of Taylor’s uncle, Brad Hale, in Highland Park in the 1980s. You can keep up with Yeah Huh on the band’s website, Bandcamp, Soundcloud, and Instagram.