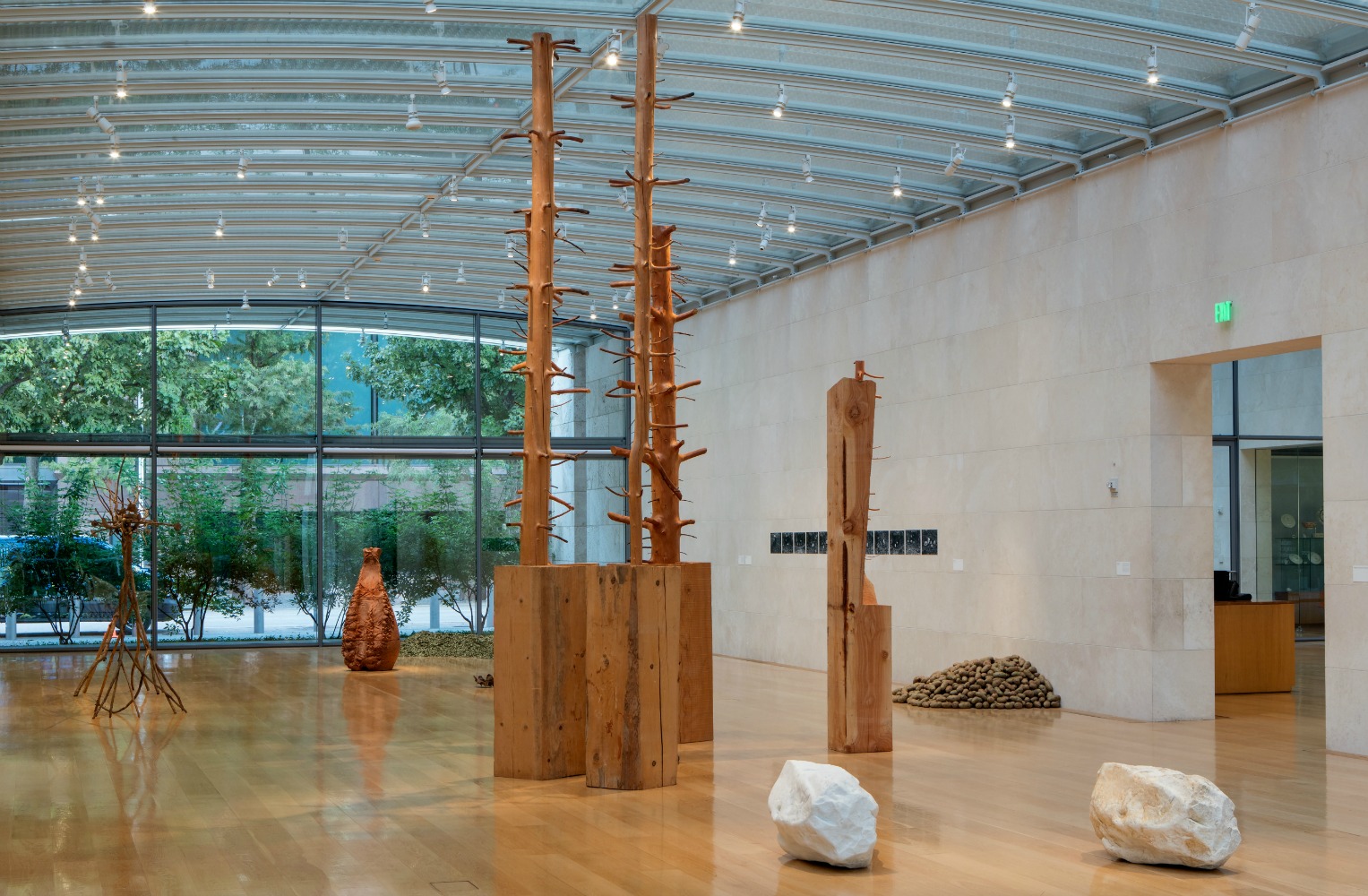 ‘Being the River, Repeating the Forest’ at the Nasher Sculpture Center, including ‘Patate’ on the right. Photo: Kevin Todoro

These days, the mail brings us wrapped boxes and holiday gifts. KERA’s Jerome Weeks reports, in keeping with the season, Jed Morse, chief curator at the Nasher Sculpture Center, received an elaborately packaged item last week in the mail. He wasn’t surprised. He wasn’t even surprised when, inside, he found — a single potato.

‘Giuseppe Penone: Being the River, Repeating the Forest’ at the Nasher Sculpture Center through Jan. 10

One reason Morse wasn’t surprised: Currently, on the floor in a Nasher gallery, there’s an 800-pound pile of potatoes. It’s part of ‘Being the River, Repeating the Forest,’ an exhibition of works by Italian artist Giuseppe Penone.

Penone was part of a loose art movement in the ’60s that was given the label ‘Arte Povera’ – meaning ‘poor art.’ The artists used ordinary materials and objects, and they focused attention on nature, natural functions and transformations like decay and growth, letting them happen, documenting them as they happened. This ‘return to fundamentals’ is why some Penone sculptures at the Nasher are, basically, tree trunks. And in “Patate,” – Italian for potatoes – he used a pile of potatoes.

In the art world, ‘Patate’ is one of Penone’s best-known works. But Jed Morse says many museumgoers at the Nasher walk right past it — partly because of the bigger, more eye-catching Penone works in the gallery. But the ones who do stop, he notes, “they’re either perplexed or they kind of chuckle about it. But then they look at it. And then there’s that element of surprise, that moment when they say, ‘Oh. Look. There’s one with an ear.’” 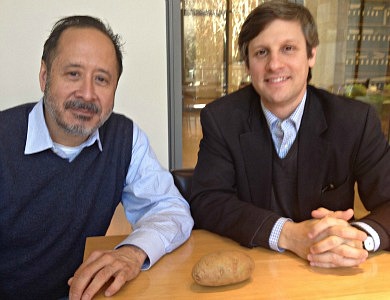 That’s because included with the potatoes are small bronze pieces. Penone made them from potatoes that grew into molds shaped like parts of his face: his nose, ears, lips.

With these bronze bits tucked into the pile, the artist essentially joins the potatoes – just as we all will. We all grow, we’ll die, we’ll fall to pieces, we’ll return to the earth — much like a potato. Penone may use simple materials but he employs them in unconventional, meaningful ways.

“Being the River” is the first U.S. exhibition of Penone’s artworks in 30 years. When Stephen Lapthisophon heard about it from Morse, he was excited. Lapthisophon is a celebrated conceptual artist who teaches at UT-Arlington. And Penone’s work has long been an inspiration, especially for what Lapthisophon calls its “everydayness.” He first encountered the Italian artist’s sculptures in the ’70s, when he was a grad student at the School of the Art Institute of Chicago. He’s been thinking about Penone’s ideas ever since.

“Some of the earliest pieces I did with potatoes,” he recalls, “were in some ways trying to pay tribute to Penone’s work. I mean I just thought about how crazy it was to pile up this pile of potatoes that was going to go bad.”

It was that potential for rotting, he says, that seemed so bold and, well, unnatural in a typically pristine museum gallery. Together, Lapthisophon and Morse decided that for the Penone exhibition, Lapthisophon would create a project, four responses to the show collectively called “Toccare (Non) Toccare” – meaning “Touch Don’t Touch.” The project would include drawings and poems as well as the video- and audio-recording of the responses, then displaying them on the Nasher website. Lapthisophon will create a kind of ‘conversation’ with the Penone show.

All of which brings us to the potato that Lapthisophon mailed to Morse – and to Lapthisophon and me interviewing the Nasher curator about keeping the tuber in his office. 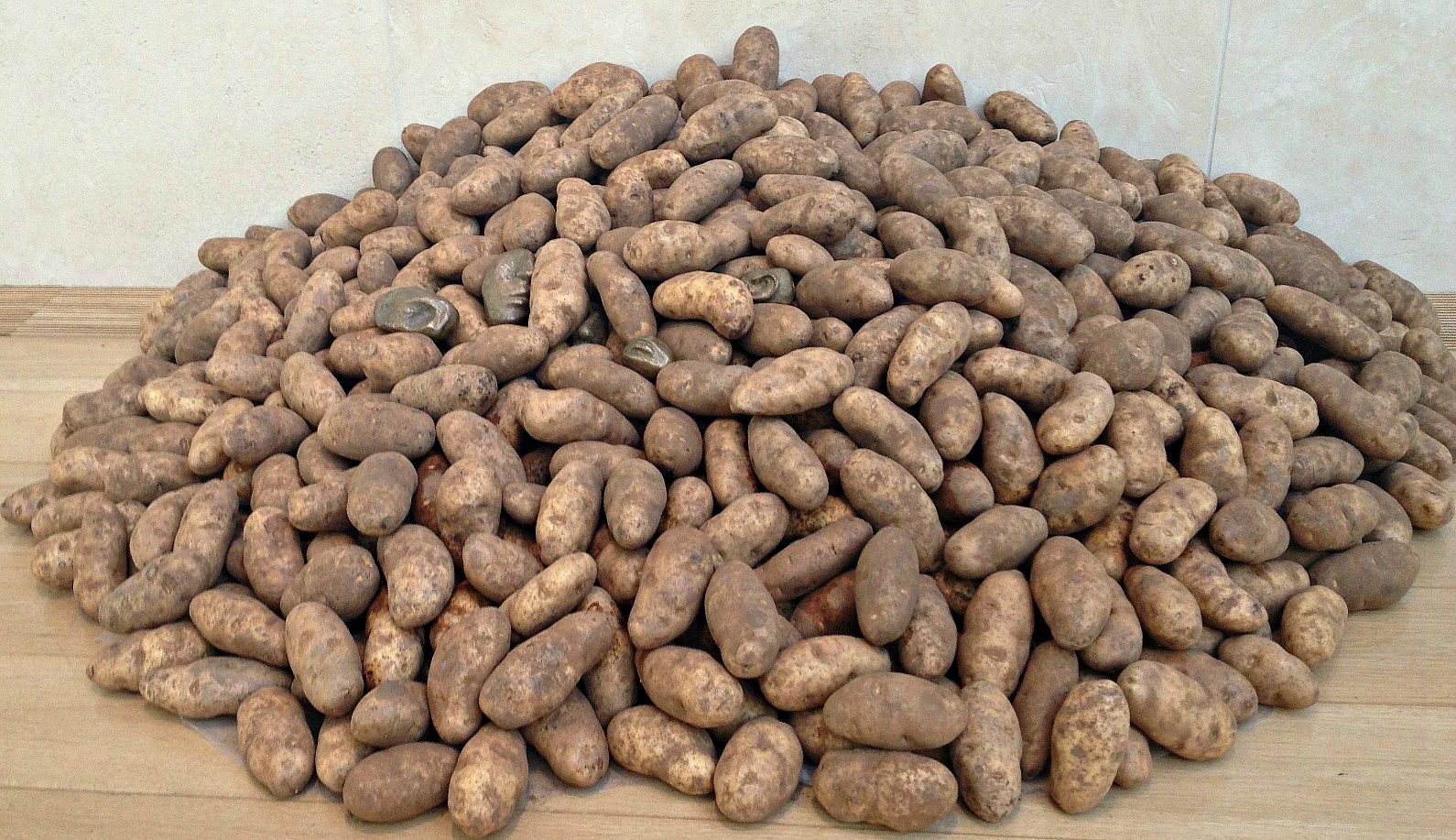 Lapthisophon: “Specifically, just what was it like to live with the potato?”

Morse: “I was thinking, what do I do with this potato?”

Lapthisophon [laughing]: “That’s what I wanted you to think about.”

Morse: “You had given me a sense of responsibility in the piece, and there weren’t clear instructions about what to do with the potato.”

Weeks: “Where did you keep it?”

Morse: “I put it on my desk by the photographs of my wife and my kids” [laughs]. So it sits there and I can look at it as I work.”

Weeks: “What was the response of people coming into your office?”

Morse: “I have to admit, it was probably hard to notice because my desk has a lot of stuff on it.”

Both men are clearly conscious of the light absurdities here. But they also grant the potato — sitting between them on the table in the Nasher board room — does have a real presence. A carbohydrate heft, a sense of the ancient earth. Lapthisophon says this is why he uses them. “Potatoes always seem old. Even new potatoes,” he says. “And there’s something about them that’s humble and modest but at the same time oddly noble.”

But the question remains: Now that it has been selected, elaborately packaged, shipped, unwrapped, handled, recorded and thoroughly discussed — what is to be done with this particular, noble potato?

Lapthisophon says it shouldn’t be preserved like an artwork — because it’s not an artwork, not a fully-fledged one, at any rate. The artwork here lies in the video and audio documentation of “Toccare (Non) Toccare,” in Lapthisophon’s drawings and poetry, his entire conversation with “Being the Forest.”

But, the artist insists, the potato shouldn’t be … simply discarded, either.

This leads Morse to point out the potatoes in Penone’s piece have to be replaced every three weeks or so — because potatoes do what potatoes do. This means, every few weeks, Morse asks the chef in the Nasher’s cafe to order another 800 pounds of spuds. But if the old potatoes are still good, the Nasher donates them to local food kitchens. Lapthisophon’s potato could join them.

This, the artist agrees, would be an excellent use for it. Simpler, certainly more humane, than my suggestion that it be turned into vodka.

So I ask the potato. “What has this experience been like for you?”

The potato declined to comment — in the humble traditions of its kind.