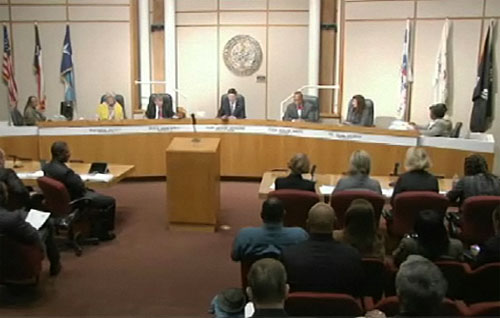 The following resolution was presented at the Dallas County Commissioners Court by Commissioner Elba Garcia on Tuesday, January 24, 2012.

BE IT REMEMBERED, at a regular meeting of the Commissioners Court of Dallas County, Texas, held on the 24th day of January, 2012, on motion made by Dr. Elba Garcia, the following Resolution was adopted:

WHEREAS, KERA, the nationally-recognized and award-winning not-for-profit public broadcasting station of North Texas celebrated its 50th Anniversary; and

WHEREAS, it began under the early leadership of public broadcasting icons Ralph B. Rogers and Robert A. (Bob) Wilson; and

WHEREAS, in its early years the station was known as “The Little Red School House of the Air,” laying the foundation for what is now the public television and radio network that reaches the fourth-largest population area in the country. It excels in presenting a weekday lineup of award-winning children’s programming from iconic shows, such as Sesame Street and The Electric Company to newer programs, including WordGirl, Sid the Science Kid and the bilingual Maya and Miguel, that inspire children to love learning and explore the realms of reading, language and science; and

WHEREAS, through the years KERA has featured a wide variety of original programming produced by  the station, including Newsroom with Jim Lehrer,  Lee (Clark) Cullum and Bob Ray Sanders; concert specials starring music legends Willie Nelson and Kris Kristofferson; and a large slate of programs about the people, places and history of Texas. Shows that include: Wildflowers with Helen Hayes and Lady Bird Johnson, After Goodbye: An AIDS Story, a program documenting the impact of AIDS on Dallas’ Turtle Creek Chorale, and The U.S.-Mexican War (1846-1848) series produced in English and Spanish. The station has won multiple National Emmy Awards and is a two-time winner of the Alfred I. DuPont-Columbia University Award, the highest honor for broadcast journalism; and

WHEREAS, KERA’s parent organization, North Texas Public Broadcasting, expanded the reach and diversity of its public broadcasting programs by adding two award-winning radio stations KERA 90.1 (1974) and KXT 91.7 (2009), the digital television channel KERA WORLD (2009), and Art&Seek (2008), an extensive on-air and online resource for arts and culture in North Texas. The organization has kept pace with emerging technologies by offering programs online at kera.org and through mobile applications. Over two million people in North Texas and beyond access content from these resources every week.

NOW THEREFORE BE IT RESOLVED that the Dallas County Commissioners Court officially congratulates KERA on it 50th Anniversary and wishes them continued success for a strong public broadcasting future in North Texas for many years to come.