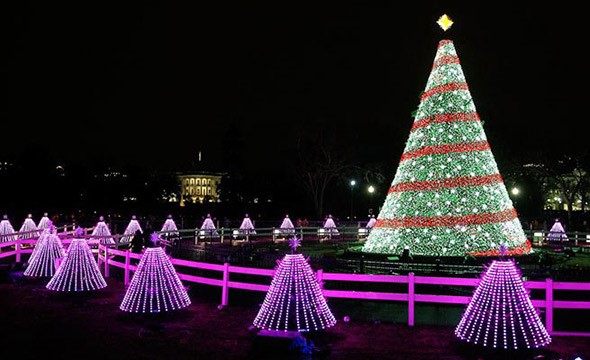 KERA is excited to celebrate the holiday season with a festive lineup of television and radio programs. Read below for program descriptions and air times:

Actress Reese Witherspoon hosts the 93rd annual lighting of the national Christmas tree at the White House in Washington, D.C.

Returning this Christmas as our guest singer is award winning broadway singer Laura Osnes. She is joined by the Metropolitan Opera Soloists including Erin Morley—Soprano, Tamara Mumford—Mezzo-Soprano, Ben Bliss—Tenor, and Tyler Simpson—Bass. Martin Jarvis, acclaimed British screen and voice actor, will be our guest narrator.

Join celebrity chef and television host Lidia Bastianich as she celebrates the holidays at home with some of her celebrity friends.

It’s a Christmas celebration with star chef Hubert Keller who is taking viewers on a special culinary journey to his homeland of Alsace. Visit the area’s famed Christmas markets and its top culinary hotspots. Highlights include: A tour through the beautiful village where Chef Keller grew up and its medieval Christmas market; Stops at Chef Keller’s favorite cheese store and restaurant, plus an Alsatian winery; A finale at a spectacular Christmas dinner attended by Chef Keller’s family and friends.

Having spent most of her adult life in the kitchens of highly-lauded restaurants, Vivian has rarely celebrated the holidays during busy Decembers. This year, she and her husband Ben Knight are determined to give their toddler twins a traditional holiday experience, cooking, laughing, and yes, crying their way through Southern traditions new and old. In this holiday special, Vivian discovers that mistletoe is traditionally shot out of a pecan tree, experiences her first hog killing, and leads a “tacky Christmas sweater” night with the restaurant staff at Chef and the Farmer.

Chloe (Nell Tiger Free) sees Mr. Stink (Hugh Bonneville) every day, but she’s never spoken to him, which isn’t surprising, because he’s a tramp — and he stinks. But before she knows it, Chloe has an unusual friend hiding in her garden shed when it seems Mr. Stink and his stinky dog, Duchess, might be driven out of town. As Chloe struggles to make sure no one sniffs out Mr. Stink, she also has to cope with an overbearing mum who is more interested in her own political ambitions than her daughter, her put-upon dad who has a secret of his own, her “perfect” younger sister, Annabelle, and the nasty girls who make her life miserable at school. There is also one other person with an extraordinary secret, as it turns out that there is more to Mr. Stink than meets the eye … or nose. This special family comedy with a nose-clenching twist is based on David Walliams’ best-selling book.

As celebrations swing into action, Poplar readies itself for Christmas 1960; a festive bus trip to see the Regent Street lights and a visit from a BBC film crew promise to make it a Christmas to remember. But it’s a difficult time of year for grieving mother Iris; bringing back memories of her long departed baby daughter. And at Nonnatus, things are tense as Sister Monica Joan determines to bring the Christmas spirit early, despite Sister Evangelina’s disgust. As the community pull together to prepare for the televised carol concert, Nonnatus is rocked when Sister Monica Joan goes missing.

8pm – 1am – In His Own Words – Glenn Mitchell Christmas Blockbuster

In keeping with a well-loved NPR holiday tradition, hear the third collection of extraordinary Christmas stories that will transport you to unexpected places. Audie Cornish, Ken Harbaugh, Nina Totenberg and other voices from NPR’s past and present tell stories of the season in this hour-long special. Some tales are funny; some are touching; some are insightful or irreverent or nostalgic or surprising. You might recognize them from our broadcast archives — or you might fall in love with them for the first time. Featured Stories: Santa Claus, Private Eye (Duck’s Breath Mystery Theatre of San Francisco), Pass The Fois Gras: Christmas Menu Hard To Digest (Firoozeh Dumas), A ‘Silent Night’ That Brought Healing (Steve Banko), The Christmas Club (Bill Harley), All I Wanted For Christmas (NPR staffers), Christmas Gift Records (The Ban-Smo Label), The Night Before Christmas, Latin Style (Read by NPR’s Claudio Sanchez), The Designated Celebrator (Melinda Shoaf), Christmas Truce (Historian Douglas Brinkley), Wolf Christmas (Daniel Pinkwater)

This one-hour celebration in story and song is public radio’s only nationally syndicated Kwanzaa program. Hosted for nearly 20 years by acclaimed storyteller Madafo Lloyd Wilson, this annual special captures the tales and traditions of African American and African peoples.

An NPR tradition every New Year’s Eve since the 1970s, Toast of the Nation is the perfect audio complement for the occasion. It’s jazz that you can party to, all night long with countdowns to midnight in all four continental time zones. Spirited, improvised, grooving and swinging, each segment is a stop in a sequence of celebrations, contributing something new to the musical feast.