Show Description:  Designed by I.M. Pei, the home of the Dallas Symphony Orchestra has been described as “a symphony for the eyes.”

Features of the building:

Take a virtual tour of The Meyerson here.

Where to see I.M. Pei’s work

The Morton H. Meyerson Symphony Center :  was the first and only symphony hall designed by I.M. Pei but it was not the only project that brought the architect to North Texas. Dallas has five buildings designed by Pei and his partners.

Dallas City Hall:  was completed in 1977. With its prominent 34-degree cantilevered slant, City Hall is in the Government District of Downtown Dallas.

One Dallas Center:  Located in the Dallas Central Business District, this 30-story building was completed in 1979, on the heels of City Hall opening.

Energy Plaza:  Also downtown, the 49-story building is comprised of three triangles with one forming the base.  It was completed in 1983.

Fountain Place:  The 60-story office building, originally Allied Bank Tower, was completed in 1986. The 58-story glass prism building is located on the edge of downtown Dallas.

Charles and Anne Valliant Burnett Windfohr Tandy House Pei designed only three private residences. One of them is in Fort Worth. The house was completed in 1969. It typifies Pei’s characteristic use of simple, clean and sharp geometric lines and forms. 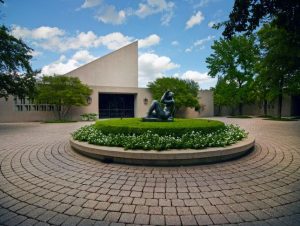 Guide to the Meyerson Site

Listen To I. M. Pei as he toured the Meyerson, one of his most important buildings.